I’m a sucker for all things Disney World. I’ll wait an hour to ride The Pirates of the Caribbean, I’ll eat three cups of Dole Whip in a day, and I’ll even pay top dollar for one of the highly sought-after restaurant reservations.

But there’s one thing you won’t catch me enjoying at a Disney park: the fireworks show.

I’ve been going to Disney World since I was a child, and in the past few years, I’ve decided to skip the nighttime fireworks show in Magic Kingdom. Turns out, I don’t miss it at all.

Here’s why I skip the show – and why I think you should, too.

It’s the same show almost every time, so you’re not missing anything

I’ve been going to Magic Kingdom for years, and the fireworks show has only changed a handful of times.

From 1971 to 2003, the show was called “Fantasy in the Sky,” so it was the same show for my entire childhood. They have updated the show more frequently as of late, but typically each new rendition lasts a few years. For example, the most recent show, “Happily Ever After,” started in 2017 and just ended this year.

My family likes to go to Magic Kingdom almost every year, and they want to watch the fireworks every time. It got to the point where I could recite the lyrics to the songs that played during the show. For me, it started to feel like a waste of time.

The show has been updated this year for Disney World’s 50th-anniversary celebrations and is titled “Disney Enchantment.” So it might be worth it to check out this year, but in my opinion, once is enough.

The park gets way too crowded and people start fighting

About two hours before the show starts, parkgoers head to the castle to pick their spot for the night’s show. In my experience, this leads to two main problems.

First, the center of the park becomes very crowded. It gets so bad that it’s impossible to maneuver your way down Main Street and even more difficult to get near the castle. As everyone flocks to one small section of Magic Kingdom, everyone starts packing closer and closer together.

Second, people become very territorial. Some start lining up hours early to get a good spot, so when others come in and try to grab a spot just minutes before the show starts, tensions rise. I’ve witnessed countless people bicker and even fight during the show because they can’t see or because they think someone stole their place.

For me, the crowds take all the magic out of the show.

Most importantly, it’s the perfect time to get on any ride within minutes

When all the parkgoers flock to the castle for the show, the rest of the park is completely empty. But guess what? The rides keep going. That means there are practically no lines at some of the biggest and most sought-after attractions. 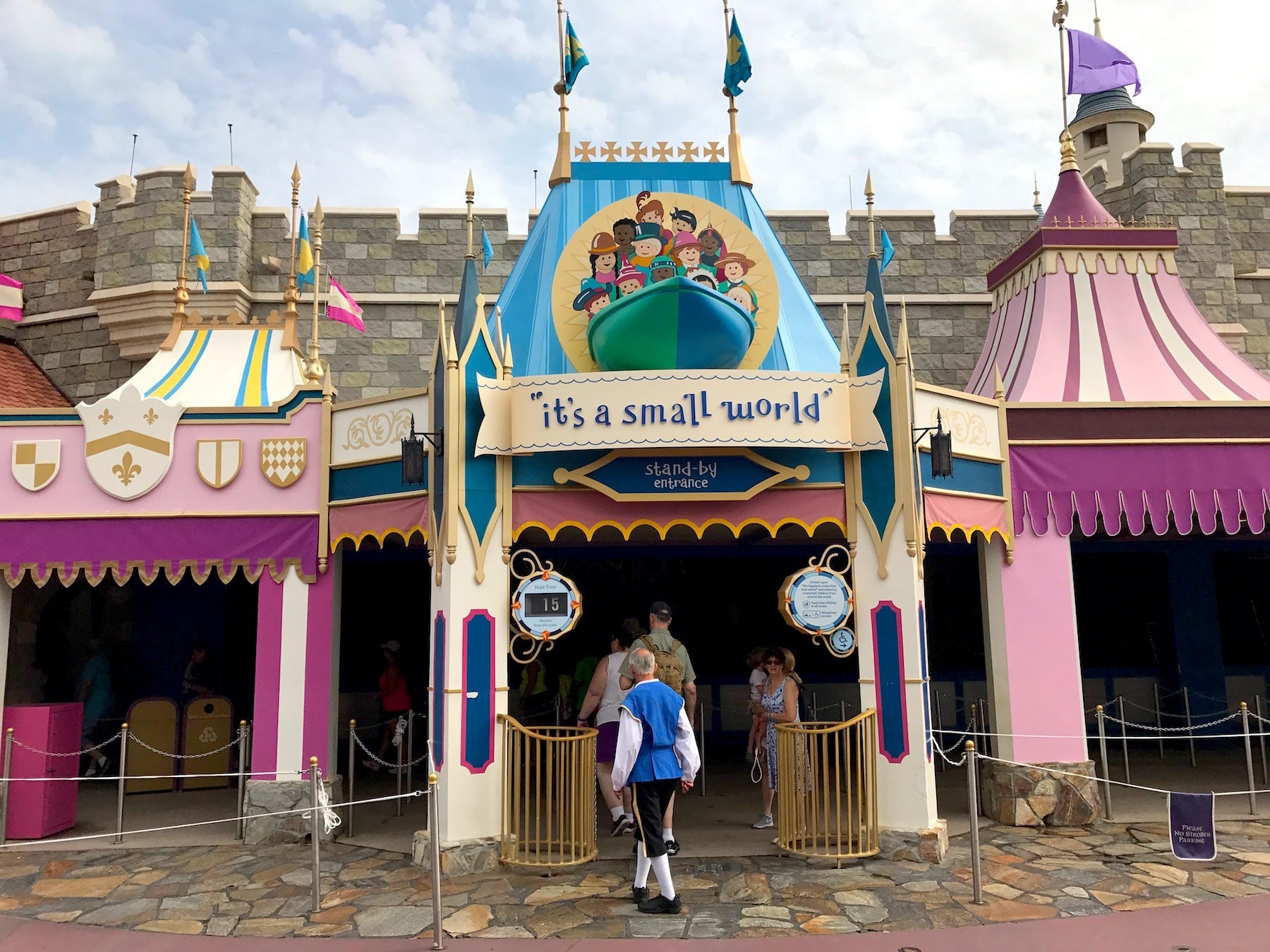 If there was a ride during the day that you couldn’t get a Fast Pass for or if the line was always too long, the fireworks show is the best time to hop right on. The last time I was at Magic Kingdom, I skipped the show and rode Big Thunder Mountain twice and Pirates of the Caribbean once.

I call it “The Magical 20 Minutes” because it feels like the entire Magic Kingdom is yours and you can do whatever you want.

There’s no better time to experience a completely empty Disney World park than when everyone is distracted by the show.

Leuven: the small Flemish town with a big (bang) history

© Provided by GamePur The Hider of Sizable Stashes Commendation in Sea of Thieves requires you to create a Treasure Stash map that leads to five treasures on the same ... Read more »

(Bloomberg) — Intel Corp. plans to list shares of its Mobileye self-driving car business by the middle of next year, letting the chipmaker capitalize on its investment in a burgeoning ... Read more »

© Image: Microsoft Master Chief and The Weapon in Halo Infinite. Halo Infinite’s campaign launches on Wednesday, but after your first trip through the story, you won’t be able to ... Read more »

Marikina City Representative Stella Quimbo on Monday called for the overhaul of Philippine Health Insurance Corporation’s (PhilHealth) operations for the country to have an “effective and responsive” national health insurance ... Read more »

Fr. Nicanor Austriaco at Dec. 6, 2021 briefing The Philippines may already be enjoying a substantial level of immunity to COVID-19 as the country has been recording its lowest number ... Read more »

© Provided by BusinessWorld Follow us on Spotify BusinessWorld B-Side Money Talks is a series on personal finance sponsored by Metropolitan Bank & Trust Co. (Metrobank).  Money is on the ... Read more »

WHO advises against blood plasma treatment for Covid-19

COVID treatments using plasma taken from the blood of recovered coronavirus patients should not be given to people with mild or moderate illness, the World Health Organization (WHO) said Tuesday. ... Read more »

Opinion: Bayern Munich should not hold back against FC Barcelona

Dingdong Dantes IG Marian Rivera is already en route to Israel for the Miss Universe pageant! The Kapuso Primetime Queen, who is part of this year’s selection committee, posted a ... Read more »

© Thomas COEX Nobel Peace Prize winner Maria Ressa has been allowed by courts in the Philippines to travel to Oslo to pick up the award in person Philippine Nobel ... Read more »

© PIERRE-PHILIPPE MARCOU Defending champions Chelsea are one of four English clubs already qualified for the Champions League last 16 As Barcelona and Spanish champions Atletico Madrid scrap for a ... Read more »

© Unang Balita EDSA traffic, EDSA Busway Traffic on EDSA has improved with the implementation of the modified number coding scheme in the National Capital Region, an official of the ... Read more »

© Provided by Dot Esports Call of Duty: Vanguard is gearing up to launch its very first season later this week, and in preparation, Sledgehammer Games have detailed everything new ... Read more »

The Liverpool FC Women were put in a bit of a precarious position over the weekend when back up goalkeeper, Katie Startup, was recalled from her loan to her parent ... Read more »

In the midst of balancing work-from-home, kids’ homeschooling, and household chores, it’s become harder for moms to squeeze in some me-time this past couple of years. If you can’t remember ... Read more »

Who are the voice actors in Halo Infinite?

© Provided by GamePur Halo Infinite introduces a lot of new characters to the Halo universe. While Master Chief and Cortana may be the main two stars of the franchise, ... Read more »

© Provided by Dot Esports Pokémon Go’s Dragonspiral Descent is bringing some of Unova’s rarest and heaviest hitters to the game as players continue to learn more about a mysterious ... Read more »

© Provided by GamePur The Halo games’ campaigns are rife with memorable missions that can be a lot of fun to go back and revisit. In previous games, you could ... Read more »

© Provided by GamePur You might find yourself encountering several issues if you’ve been attempting to log in to Final Fantasy XIV. These problems can consist of having trouble with ... Read more »

© Provided by Dot Esports Teleport can be an extremely useful tool in League of Legends. The summoner spell is commonly used to get to key locations around the map ... Read more »

© Photo by Ulrik Pedersen/NurPhoto via Getty Images Christopher Nkunku is the top midfielder in fantasy UCL. Will he make your MD-6 squad? After three months of excitement and drama, ... Read more »

John Lapus sees DonBelle tandem could be the next KathNiel

DonBelle’s sweetness both on-cam and off-cam made actor-director John “Sweet” Lapus on Thursday, December 2 believe that the tandem could be the next KathNiel. © Provided by LionhearTV “May movement, ... Read more »

© Provided by Mom.com Whitney Fleming Few things unite parents more than their universal hatred of Elf on the Shelf. Okay, so maybe “hate” is too harsh a word here. ... Read more »

MANILA Mayor Francisco “Isko Moreno” Domagoso on Monday threw his support behind the senatorial candidacy of President Rodrigo Duterte and offered to adopt him as his party’s fourth bet for ... Read more »

In celebration of Filipinos’ favorite time of the year, DITO Telecommunity is dedicating a special Christmas video to its millions of subscribers all over the country. © Provided by LionhearTV ... Read more »

© Bloomberg Trends at Art Basel Miami Beach That Could Spill Into Next Year (Bloomberg) — There are three primary ways galleries source work for an art fair booth. Most ... Read more »

Life after lockdown: Janina Roque on moving from Melbourne to Dubai during a pandemic

Where to find Berkanan Sap in Final Fantasy XIV

How to complete the Dragonspiral Descent Collection Challenge in Pokémon Go

DOH: IATF agreed not to add more countries to red list for now