Hundreds of Sudanese protesters took to the streets Saturday demanding the dissolution of the transitional government, saying it had failed them economically and politically. 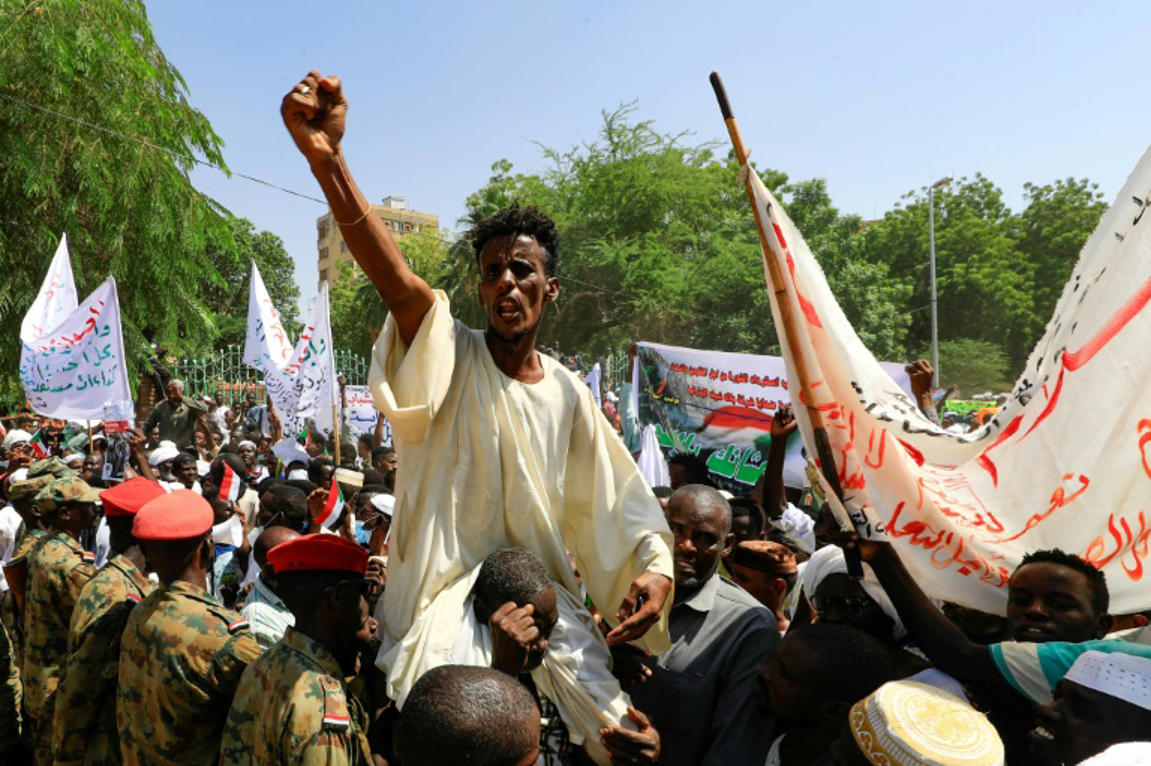 © ASHRAF SHAZLY Sudanese protesters take part in a rally demanding the dissolution of the transitional government, outside the presidential palace in Khartoum on Saturday

The protests came as Sudan’s political scene reels from divisions among factions steering the country through a rocky transition following the April 2019 ouster of president Omar al-Bashir after mass protests against his rule.

Saturday’s demonstrations were organised by a splinter faction of the Forces for Freedom and Change, a civilian alliance which spearheaded the anti-Bashir protests and became a key plank of the transition.

“We need a military government, the current government has failed to bring us justice and equality,” said Abboud Ahmed, a 50-year-old protester near the presidential palace in central Khartoum.

Critics of Saturday’s protests alleged that the demonstrations were driven by members of the military and security forces, and involve sympathisers with the former regime.

Protesters carried banners calling for the “dissolution of the government”, while others chanted “one army, one people” and “the army will bring us bread.”

“We are marching in a peaceful protest and we want a military government,” said housewife Enaam Mohamed in central Khartoum.

On Friday, Prime Minister Abdalla Hamdok warned that the transition is facing “the worst and most dangerous” crisis.

Support for the transitional government has waned in recent months mainly following a tough raft of IMF-backed economic reforms.

It slashed subsidies on petrol and diesel and brought in a managed currency float, measures deemed by ordinary Sudanese as excessively harsh.

The government has also been beset by protests in east Sudan where demonstrators have blocked trade through a crucial Red Sea port since mid-September.

On September 21, the government said it thwarted a coup attempt which it blamed on military officials and civilians linked to Bashir’s regime.

Ian Wright was forced to prematurely leave ITV’s live FA Cup coverage on Sunday afternoon due to a family bereavement. The former Arsenal and England man was on punditry duties ... Read more »

ANYONE who tells you they don't get nervous before a first date is probably lying. End of. Even the mere thought of sitting across a table from someone we barely ... Read more »

© Provided by Zee News New Delhi: Dhamaka actor Kartik Aaryan opened up about his career in Bollywood at a recent event. He clearly stated that he doesn’t belong to ... Read more »

Scalp itching is one of the most irritating sensations, which makes it difficult for us to concentrate on anything else. The most prevalent causes of that itch are dandruff and ... Read more »

On December 2, 2021, a new Indo-Pak ‘Border’ came into existence in the form of a human being. A Pakistani couple named their newborn baby boy ‘Border’. They have been ... Read more »

© Provided by Pinkvilla ***Spoilers Alert*** Prince William has opened up on how Taylor Swift had once convinced him to sing on stage with her and Jon Bon Jovi. During ... Read more »

It was an eventful week in Bollywood. With the film release of Tadap, the Lokmat awards, upcoming weddings and more, a number of celebrities stepped out dressed in their best ... Read more »

© Provided by Jagran English New Delhi | Jagran News Desk: At least seven more people in Maharashtra have tested positive for the Omicron variant of COVID19 on Sunday. As per the State Public ... Read more »

© Provided by GamePur Spider-Man is not the only Marvel-based addition to Fortnite Chapter 3 Season 1, as you can also find the Daily Bugle on the map. The New ... Read more »

© Provided by Pinkvilla Katrina Kaif is all over the news these days as she is set to walk down the aisle soon. The actress has been dating Vicky Kaushal ... Read more »

Kyle Burnum MUNCIE, Ind. — A Muncie man accused of repeatedly sexually abusing a pre-teen girl has entered into an agreement that could send him to prison for up to ... Read more »

CHICAGO (AP) — After two brothers spent hours telling a jury how Jussie Smollett paid them to carry out a fake racist and anti-gay attack on himself in downtown Chicago, ... Read more »

Premiered in Amsterdam in January this year, without an audience but broadcast on radio, James MacMillan’s big new choral and orchestral work was widely welcomed as one of the most ... Read more »

Prince William has admitted he head-bangs to the heavy metal of AC/DC’s music to get him in the mood for his royal duties. The prince divulged his music tastes in ... Read more »

© Provided by 702 Gauteng Health Department has condemned the attack on a vaccination team in Soshanguve, north of Pretoria. The department says the perpetrators fled with vaccination programme gadgets ... Read more »

ON December 4, 2021, Fortnite fans got a sneak peak of the upcoming Chapter 3 launch after a video leaked online. Now fans want to know when they can be ... Read more »

© Greg Bajor/Getty and Getty Plane and covid swab From Tuesday, all incoming travellers aged 12 and over will have to take a test up to a maximum of 48 ... Read more »