Hailey Bieber, Hailee Steinfeld, and Maude Apatow are among the celebs who’ve been spotted in catsuits (Picture : Getty)

From Halle Berry’s iconic Catwoman get-up to the red PVC number Britney wore in the Oops I Did It Again video, a catsuit has the power to make a look go down in history.

Similar to a jumpsuit, these all-in-ones cover the legs and torso, in stretchy fabrics that sit tight against the body.

Dua Lipa, Kim Kardashian, and Cardi B are all fans of one-piece outfits, and we’ve seen them on Halpern, Prada, Emilio Pucci, and Tom Ford runways over the last few seasons.

Cementing the item as a trend, Rihanna has been rocking catsuits throughout her pregnancy to show off her bump – and where she goes, we follow.

The unitard has long been a mainstay for performers, offering room for movement and hugging the figure without revealing more than planned.

For us regular folks, though, it’s a hard piece to pull off.

Because catsuits are typically worn by superheroes and A-listers, you may feel overdressed or like you’re in costume when you don one yourself.

Particularly if you normally wear jeans or baggier items, you might also be daunted by the prospect of clothes that appeared to be sprayed on.

Catsuits have long been a Kardashian favourite (Picture: Gotham/GC images)

When we see catsuits on stage and screen, we don’t see the behind the scenes work that goes on to create the ‘perfect’ silhouette.

Padding, body tape and, in some cases, cosmetic surgery and camera trickery are all part of the celebrity stylist’s arsenal, so it’s important to remember this when you’re grappling with lycra and feeling deflated.

Using the same methods is in no way required, but if you’re feeling uncomfortable and can’t beat ’em, why not join ’em?

Shapewear doesn’t have to be restrictive, and a good pair of high-waisted shorts smooths out bumps and pantylines perfectly under stretchy fabric. Check out Spanx, Skims, and M&S’s Magicwear range for suitable options.

Once you’re happy with the foundations, you need to choose your catsuit and build your outfit from there.

There are two ways you can go when it comes to catsuits; fun and bright or sultry and slinky.

The first option is best for daytime or casual events. Go for psychedelic prints and clashing colours to keep the overall aesthetic playful, layering with offbeat extras like a bowling shirt or fringed kimono.

The floral Lanvin outfit Gigi Hadid recently wore to dinner in Paris is a perfect example of how to work a catsuit: keep it bold, pair with plenty of jewellery and accessories, and lean into the fun and childlike element of effectively wearing a onesie.

When it comes to formal occasions, a grown up feel is needed. Take inspiration from Mugler’s iconic hyperfeminine catsuits, using mesh and cut-outs to accentuate your curves.

Rather than pattern and colour, to make a catsuit stand out as a nighttime ensemble you should look for embellishments like glitter, studs, jewels, and metalwork.

You can absolutely get away with trainers or chunky boots with a catsuit, although an elegant heel can elongate your body and make you feel more dressed up should you want to.

Don’t yet feel quite ready to go full catsuit? Match the colours of your top and bottom half for a cohesive, monochrome look.

We’ve rounded up our favourite catsuits you can buy right now, so your only worry will be if you need to use the loo while wearing it…

Keep things cosy yet cool by layering up (Picture: PLT)

Frilly detailing draws the eye upwards if you want to accentuate your neck and shoulders (Picture: Wild Thing)

Wear with a kimono and boots for off-duty-model chic (Picture: H&M)

Sturdy velvet makes this catsuit slightly more SFW than those made with lycra (Picture: Samantha Pleet)

Leave however much skin you want to the imagination with flirty mesh panels (Picture: Asos)

A statement necklace will make this a perfect formal yet edgy ensemble (Picture: MyTheresa)

Go for a cut-out at the front to break up your torso (Picture: Boohoo)

Not sure how you’d wear a bra with this, but it is very pretty (Picture: Rebellious Fashion) 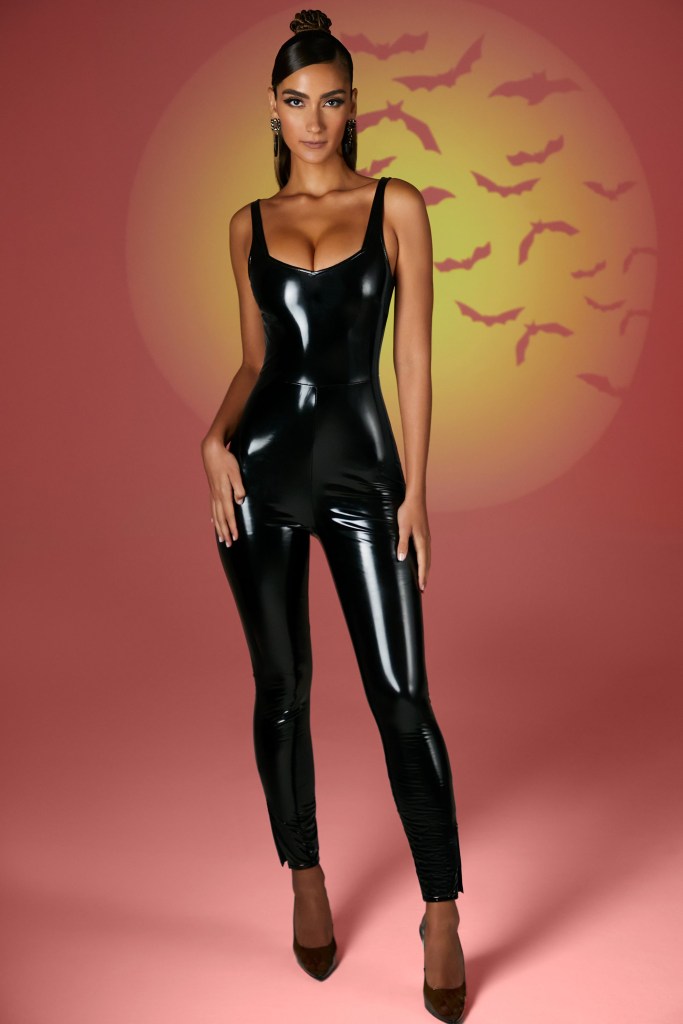 Go bright with accessories and fresh with makeup if you want to dress this down slightly (Picture: Oh Polly)

This article contains affiliate links. We may earn a small commission on purchases made through one of these links but this never influences our experts’ opinions. Products are tested and reviewed independently of commercial initiatives.

Get in touch by emailing MetroLifestyleTeam@Metro.co.uk.