More than 75 percent of the 69 men who ruled the Roman Empire from 63BC to 395AD died from violent deaths – either on the battlefield or they were brutally murdered by conspirators looking to remove them form the throne, scientists have determined.

The rest, which accounts to just one in four, died of natural causes like sickness or old age.

Data scientists University of São Paulo’s Institute of Mathematical and Computer Sciences (ICMC-USP) in São Carlos determined the 80/20 rule is associated with the deaths of the Roman rulers, as they were more likely to die of unnatural causes.

Analyzing the deaths further, researchers found an emperor was more likely to perish from unnatural causes shortly after taking the thrown and the threat did not decline for 13 years after. 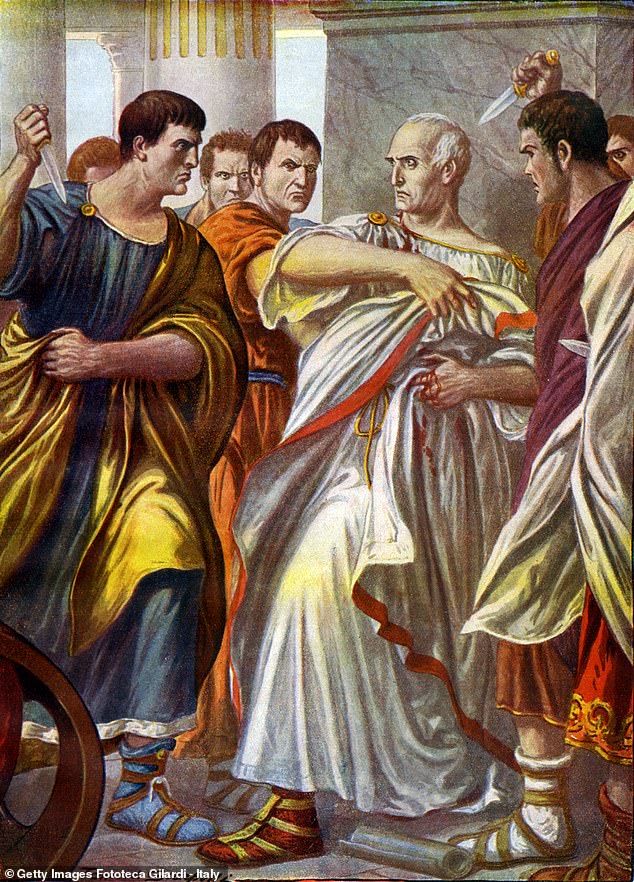 More than 75 percent of the 69 men who ruled the Roman Empire from 63 B.C. to 395 A.D. died from violent deaths. One such famous death was that endured by Julius Caesar (pictured), who reigned from 46BC to 44BC. Caesar died at age 55 when he was violently stabbed 23 times

One such famous death was that endured by Julius Caesar, who reigned from 46BC to 44BC.

Caesar died at age 55 when he was violently stabbed 23 times, in a plot among 40 conspirators on the Ides of March.

However, other well-known emperors like Augustus (Caesar’s adopted son) at age 75 of natural causes and Marcus Aurelius died at 55 years years old from a hemorrhage.

The researches set out to see if the death data was associated with any mathematical patterns, leading them to the 80/20 rule – the probability that a common occurrence happens 80 percent of the time and a rare event is about 20 percent. 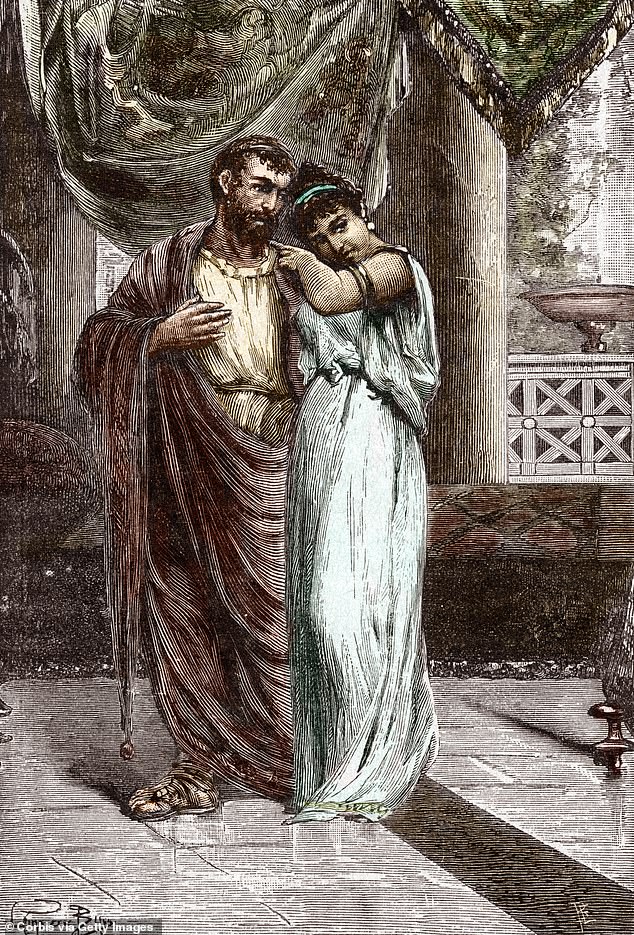 The rest, which accounts to just one in four, died of natural causes like sickness or old age.  Marcus Aurelius died at 55 years years old from a hemorrhage

In the case of Roman emperors, the rare event was them dying of natural causes.

‘When we analyzed time to death for each emperor, we found that the risk was high when the emperor took the throne,’ data scientist Francisco Rodrigues, a professor at ICMC-USP and principal investigator for the study, told Agência FAPESP.

‘This could have something to do with the difficulties and demands of the job and the new emperor’s lack of political expertise.

‘The risk then declines systematically until the emperor has reigned for 13 years. At that point, it rises sharply again.’

If the 80/20 rule is a well-known pattern, the sharp downturn in the survival curve around year 13 is a novel finding.

‘We envisaged several possible explanations for this turning-point. It may be that after the 13-year cycle the emperor’s rivals concluded they were unlikely to ascend the throne by natural means,’ said Rodrigues.

‘Perhaps his old enemies regrouped, or new rivals may have come to the fore.

‘A crisis may have arisen owing to all these factors combined. It’s worth noting that the risk falls again after this turning-point.’

Microsoft is Yahoo Finance's Company of the Year 2021

Microsoft (MSFT) has had a stunning year. After nearly 50 years in business, the tech giant crashed through the $2 trillion market capitalization mark in June, joining an exclusive club ... Read more »

Our Yorkshire Farm star Amanda Owen has opened up about facing “difficult moments” in a new interview with Lorraine Kelly. MORE: Amanda Owen's fans jump to her defence after she ... Read more »

Richard M Lee/Shutterstock There are fears that the new omicron variant of the coronavirus could be the most transmissible form of the virus yet, so infection control measures are being ... Read more »

These Are The Last Christmas Posting Dates For 2021

(Photo: Sergio Amiti via Getty Images) The festive lights have been turned on and the mince pies are out in full force, which means one thing: it’s time to send ... Read more »

Euro 2020 and sea shanties among TikTok's highlights of the year

Cats, sea shanties and Euro 2020 were among the biggest trends on TikTok in the UK during 2021, according to figures from the video-sharing platform. The social media giant’s annual ... Read more »

Looking for a holiday gift? The new Nintendo Switch is 'worth the upgrade' — plus more hot tech finds from Best Buy

Looking for more of the best deals, sales and product recommendations? Sign up for Yahoo Lifestyle Canada’s newsletter! Shoppers say the Nintendo Switch OLED Model is “worth the upgrade.” Yahoo ... Read more »

Office workers The gender pay gap has seen “barely any change” over the past 25 years once increases in women's education are accounted for, a report has said. The Institute ... Read more »

We tested for ease of set up, speed and responsiveness in everyday use (iStock/The Independent) When choosing a tablet, you’ll have to make a few decisions. What size screen are ... Read more »

Follow all the latest F1 news and reaction after Lewis Hamilton won a chaotic Saudi Arabian Grand Prix to draw level with Max Verstappen in the standings with only one ... Read more »

Taking some of the guesswork out of drug discovery

A deep learning model rapidly predicts the 3D shapes of drug-like molecules, which could accelerate the process of discovering new medicines. Read more »

Dutch designer Alexander Bannink explains how the “Sarco” euthanasia pod works as a woman experiences sitting in the device by wearing virtual reality glasses, on April 14, 2018 at the ... Read more »

Fort Collins, Colorado – A study focused on tracking the spread of COVID-19 in performing arts settings has also unveiled the population of humans who spread the most COVID-19 particles. ... Read more »

This article was produced in partnership with the Pulitzer Center’s Rainforest Investigations Network. In the forests of Guatemala, China and Scotland, oil giant Royal Dutch Shell is planting tens of ... Read more »

64 of 150 guests tested positive for Omicron after a high school lunch in Denmark, the latest in a string of spreading events