Olivia Colman‘s reign as Queen Elizabeth II has come to an end.

Sunday, Sept. 19 marks the last Emmy Awards where Colman will be up for Outstanding Lead Actress in a Drama Series for her work on The Crown. Why? Because she’s since passed on the, well, crown to Harry Potter actress Imelda Staunton.

On July 30, Netflix released the first look of Staunton’s transformation into Queen Elizabeth II, a much anticipated image as the actress’s casting was first teased back in November 2019. In the first glimpse, Staunton donned the queen’s signature short bob, pearls and yellow-patterned outfit. 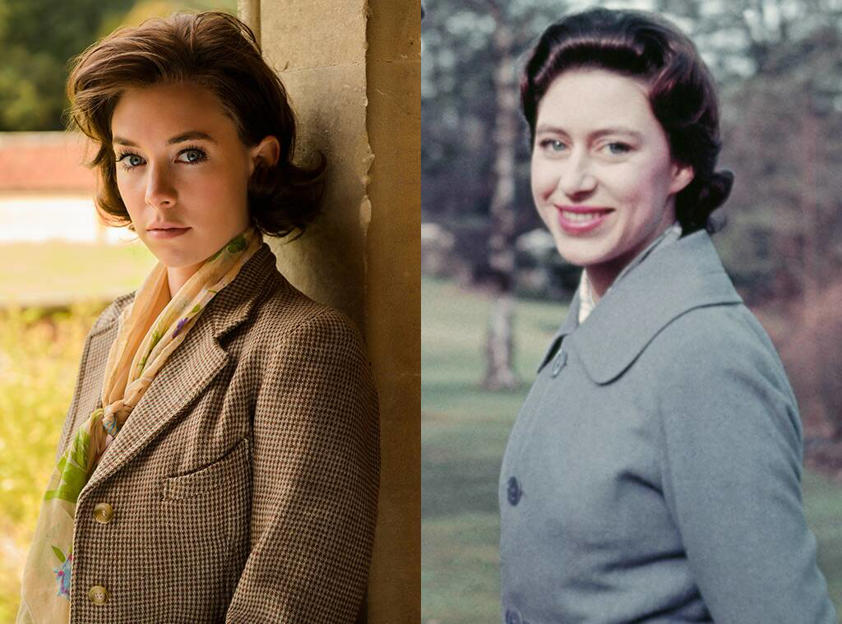 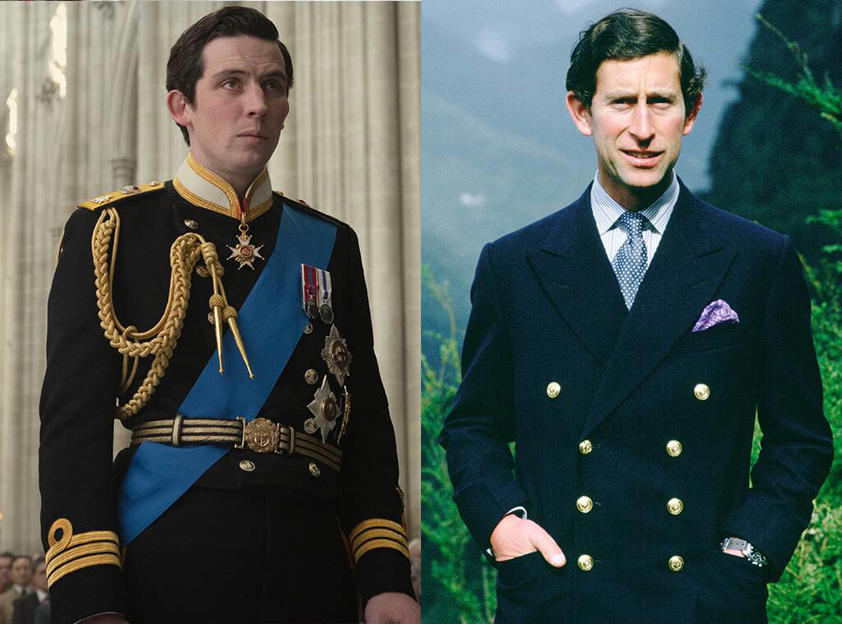 But she’s obviously not the first to hold the throne as part of the Netflix series: Prior to Staunton and Colman’s reigns, Claire Foy played Queen Elizabeth.

And it appears Colman is excited to hand over her crown. “Imelda is extraordinary,” she raved to the Radio Times in December, “and she’s going to do it all much better than me. I can’t wait to watch what she does.”

We don’t know about “better,” since season four of The Crown is up for several awards at the 2021 Emmys, including Outstanding Drama Series, Outstanding Writing for a Drama Series and many acting nominations.

Everything We Know About the Future of The Crown

Of course, Staunton’s first pic as the queen isn’t the only tease we’ve gotten for season five.

In August, Elizabeth Debicki, who succeeds Emmy nominee Emma Corrin as Princess Diana, was spotted filming a scene on the grounds of Ardverikie Lodge, which doubles as the royal family’s Scottish holiday home, Balmoral Castle. The production photo made it clear that the new season is set right in the heart of the ’90s.

After all, Debicki was seen wearing one of Diana’s classic ensembles: jeans and an oversized blazer.

We cannot wait to see the other transformations season five has in store as the new cast list also features Jonathan Pryce as Prince Phillip, Dominic West as Prince Charles and Lesley Manville as Princess Margaret. 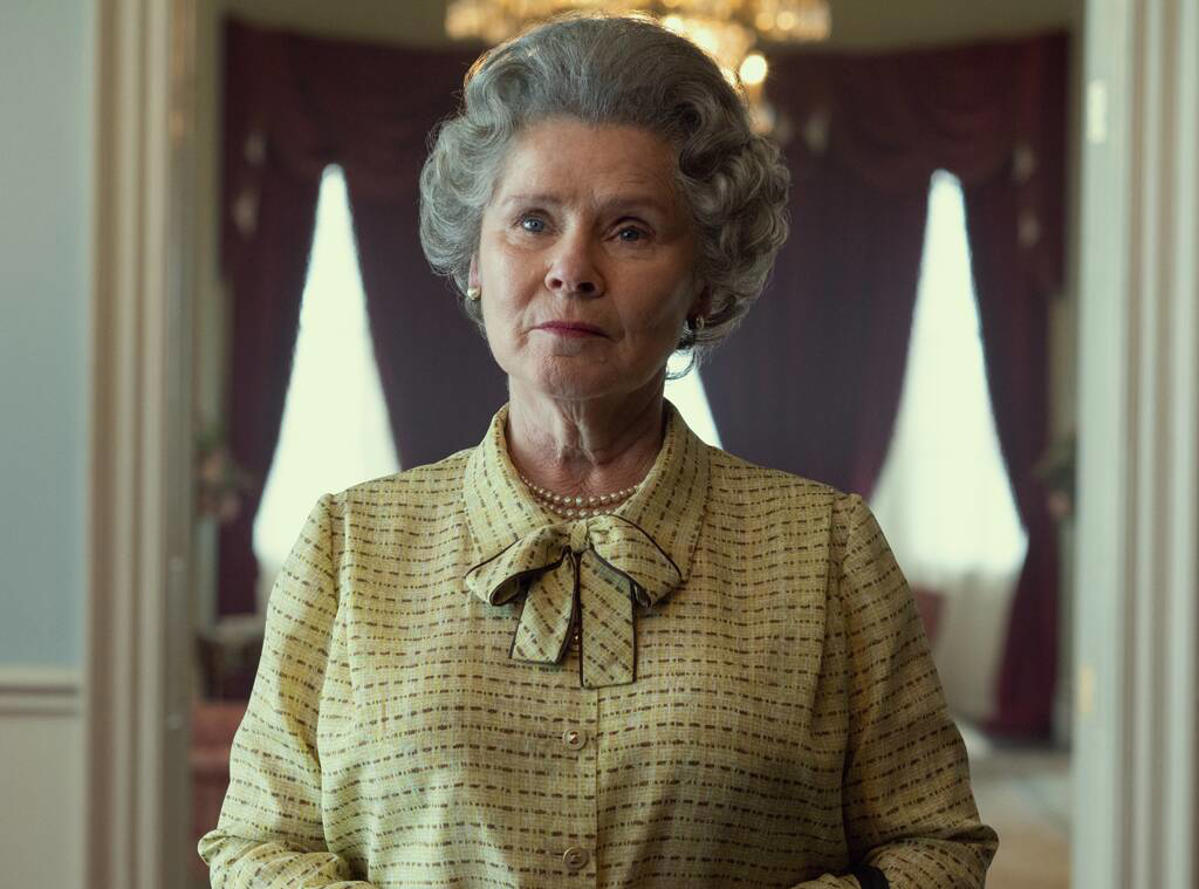 Take a closer look at The Crown cast and their real-life counterparts by scrolling through the images below.

© Netflix, Bettmann/Getty Claire Foy played Queen Elizabeth II in seasons one and two of Netflix’s The Crown , portraying the early days of the Queen’s reign. 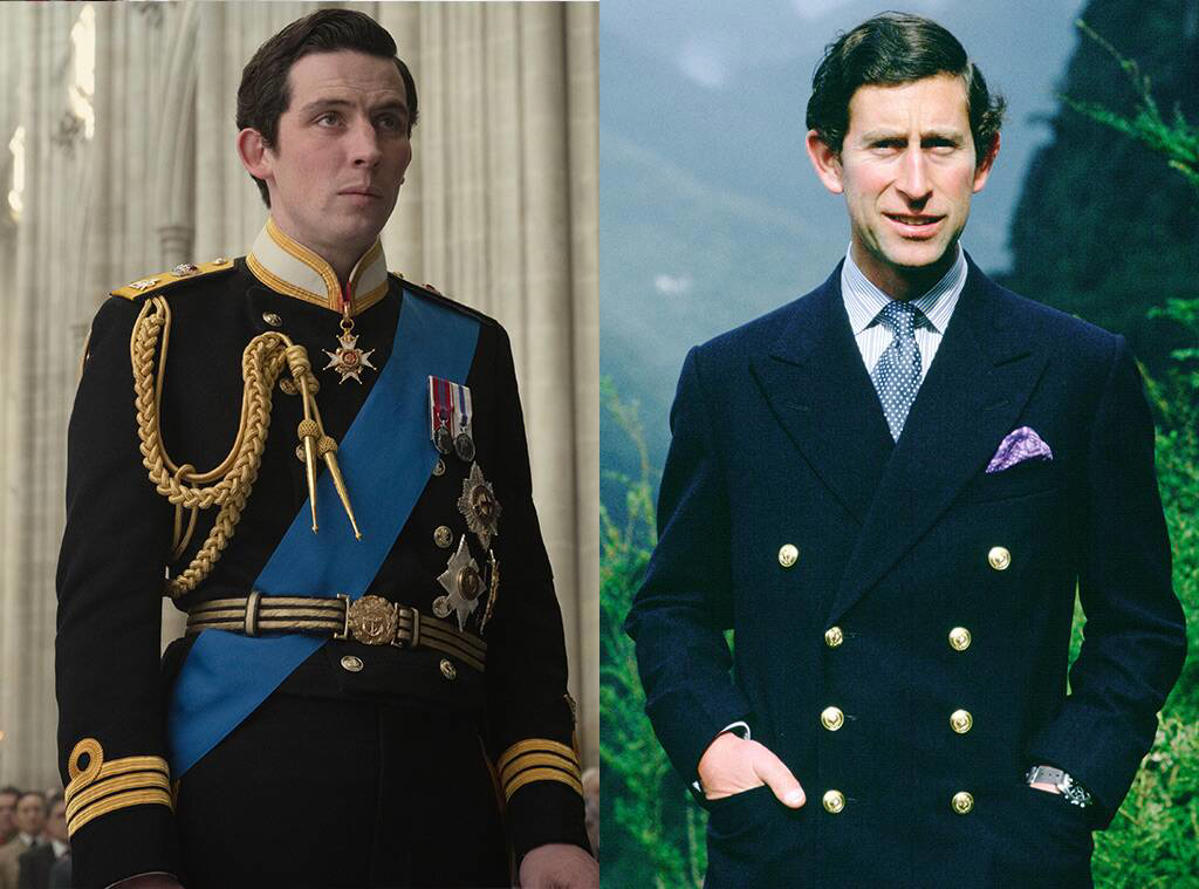 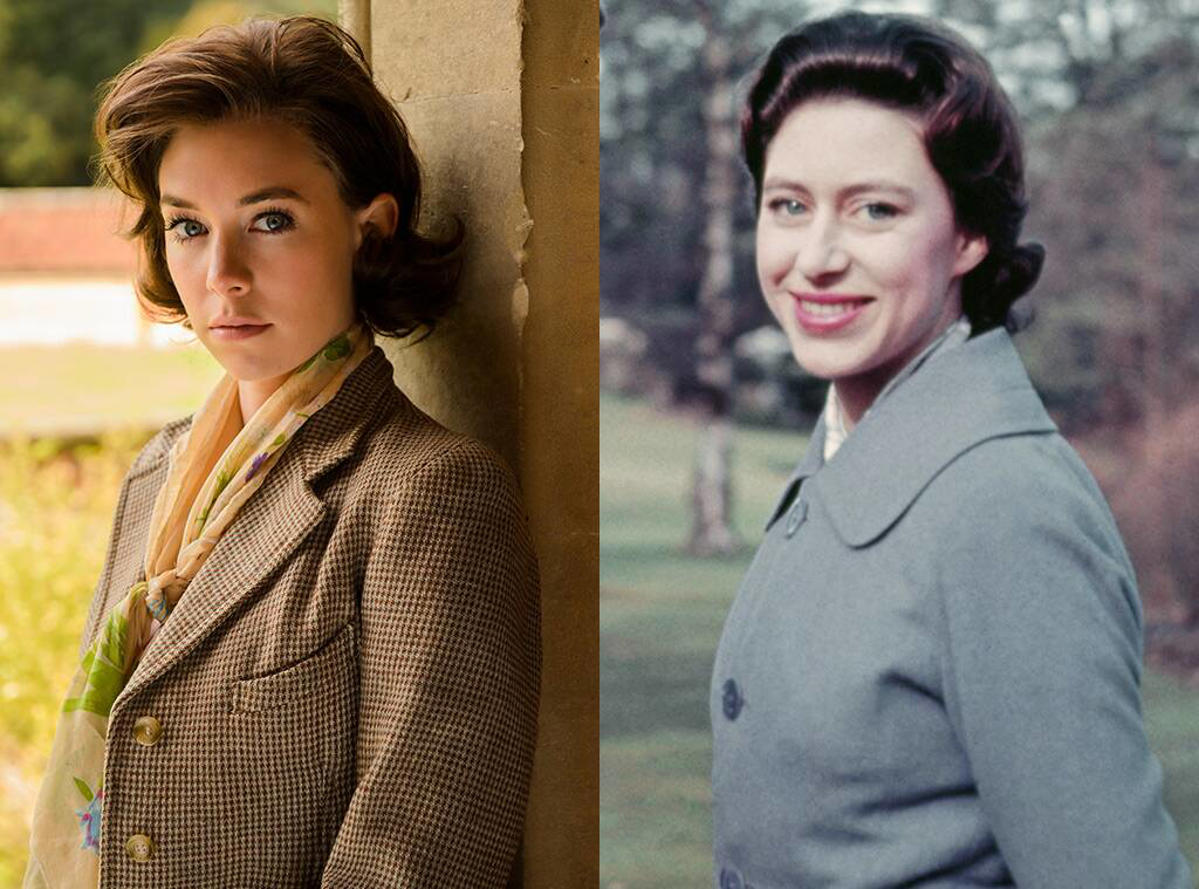 © Netflix, Bettmann/Getty Images The infamous Duke of Windsor made an appearance in seasons one through three, played at different times by Alex Jennings and Derek Jacobi .

'You' Season 3: Joe Goldberg is still a bad person. But did the finale redeem him as a father?

Rhea Chakraborty is all about ‘resilience' as she shares a selfie with brother Showik, check out her post

Adele Is Giving Us a TV Concert Special and an Oprah Interview in One Night - We Can't Wait!

The steadiest of grooves from John Legend at the Orpheum Theatre

BTS In The Soop: Here's all you need to do to enjoy K-Pop band's luxurious filming location in person

© Provided by BollywoodLife.com Do you want to grab a chance to spend some time in BTS’ luxurious filming location in person? Here’s all you need to do. To begin ... Read more »

© BBC Stephen Nolan – BBC The BBC has been criticised by its investigative reporter over its links to Stonewall amid claims that staff are too “frightened” to speak out ... Read more »

© Costco. Design: Ashley Britton/SheKnows. You can never have too many Christmas ornaments. Our over-stuffed basement storage full of holiday decorations and the bent boughs of our Christmas tree may ... Read more »

‘I'm a Dermatologist, and This Is Why I Recommend Using a Humidifier for Hair Health'

© Photo: Getty Images / Westend61 humidifier for hair Winter is coming, and as the air gets dryer, so does your hair. You may already know that now is the ... Read more »

Ant and Dec left their fans completely puzzled when they decided to cheekily swap places during a football match on Sunday 17 October. The hugely-popular Newcastle-born presenters and NTA winners ... Read more »

© Provided by Evoke.ie Former TV3 presenter Lorraine Keane has spoken of her terror after a cyber gang hacked her social media channels and demanded a ransom before threatening to ... Read more »

© Provided by Zee News New Delhi: Actress Shehnaaz Gill seems to be coping up with the loss of her close friend and rumoured boyfriend Sidharth Shukla. Shehnaaz, who had ... Read more »

© Provided by People Universal Studios via Rob Zombie/Instagram The Munsters remake is officially on the way! On Monday, director Rob Zombie shared a first look at the reboot for ... Read more »

© Courtesy of Adobe Stock/Alex from the Rock All products and services featured by Variety are independently selected by Variety editors. However, Variety may receive a commission on orders placed ... Read more »

Cue the pop jazz theme music, designer fashion labels and the New York City cityscapes: The “Sex and the City” ladies are back – well, at least most of them.  Sarah Jessica Parker (who played ... Read more »

Vince Neil rushed to hospital after falling off stage

Different ways to find the best online casino to play

A lot of people are able to have fun in this way and discover games and hobbies they otherwise wouldn’t have been able to enjoy as a result of the ... Read more »

© Squid Game – Netflix Netflix’s Squid Game is a hit after its premiere in September 2021. Here are Halloween-inspired costumes and outfits based on Squid Game. There’s no denying ... Read more »

© Provided by Independent Online (IOL) At 29, British actor Freddie Highmore has not only been embraced by Hollywood, but he’s also diversified his portfolio as an actor – by ... Read more »

Xbox tweeted out potential news about Fable before promptly deleting it

© Provided by GamePur Not much info has been revealed about Playground Games’ upcoming new Fable game since it was announced in 2020. The only info revealed about the game ... Read more »

Billy Porter Calls Out ‘Vogue' For Harry Styles Dress Cover: ‘All He Has To Do Is Be White And Straight'

Billy Porter There is no doubt that when it comes to gender-bent fashion ontheredcarpet, Pose star Billy Porter has become a household name. But in a new interview, the 52-year-old Tony winner ... Read more »

© Provided by People Axelle/Bauer-Griffin/FilmMagic Mötley Crüe’s Vince Neil broke several ribs after falling during a performance in Tennessee. On Friday, the 60-year-old was performing with his solo band (not ... Read more »

The Weeknd Revamps, Expands After Hours Til Dawn Tour for 2022

The Weeknd The Weeknd is making big renovations to his 2022 After Hours tour. On Monday (Oct. 18), the “Blinding Lights” singer hopped on Twitter to explain that the After ... Read more »

© Photo by Bellocqimages/Bauer-Griffin/GC Images Internet personality and chef Matty Matheson is hosting a pop-up at Animal restaurant today. On Instagram, Matheson says the chili cheeseburgers are free and is ... Read more »

How Jessica Simpson Feels About Buying Back Her Billion Dollar Company

Jessica Simpson‘s shoes were made for walking, and that’s just what they did—all the way to the bank. The “Irresistible” singer, who launched her label, The Jessica Simpson Collection in ... Read more »

© Provided by BollywoodLife.com After the Maharashtra government decided to reopen theatres in the state from 22nd October onward, a slew of movies from both Bollywood and South scurried to ... Read more »

Verzuz: Everything to know, including the Big Daddy Kane and KRS-One battle at Barclays

Verzuz, the webcast series born out of quarantine in early 2020, has grown into must-see appointment viewing for music fans thanks to its nostalgia factor and behind-the-scenes appeal.  The series, created at the ... Read more »

© Provided by People Frazer Harrison/Getty Lala Kent and Randall Emmett at the Midnight in the Switchgrass premiere Lala Kent may be hinting at trouble in paradise again. The Vanderpump ... Read more »

The Repair Shop star Steve Fletcher has recalled an occasion that left the whole crew working on the show in tears. The resident horologist of the workshop who is usually ... Read more »

This love story is bigger than all the small things. Over the weekend, fans celebrated when Kourtney Kardashian confirmed she was engaged to Travis Barker. On Sunday, Oct. 17, the ... Read more »

© Provided by CinemaBlend The titular characters Phineas and Ferb with their sister, Candace. There are so many amazing shows out there to watch, from fantasy series like Game of ... Read more »

The Flash Movie Has Wrapped, See The Sweet Message And Photos

© Provided by CinemaBlend Ezra Miller in ‘The Flash’ The same weekend that fans got their first sneak peek at The Flash movie, director Andy Muschietti was getting the final ... Read more »

The Weeknd cancels 2022 tour, including Fresno show, will launch stadium tour next summer

Sacramento lands Colour of Music, a classical Black musician festival. Here's how to get tickets

Billy Porter criticizes Harry Styles' historic Vogue cover: 'All he has to do is be white and straight.'

The final Forza Horizon 5 Let's Go! stream was all about the soundtrack

Talking Walls festival is back in Charlotte. Here's how to see walls transform into art.

The Quote That Ultimately Changed the Trajectory of Bebe Rexha's Life

How Jane Asher – and her mother – changed Paul McCartney, and inspired some of his greatest songs

The Most Beautiful Places to Visit in Texas

Here's What Went Down at Our Virtual ‘Queens' Premiere Party

I've been a bridesmaid over 125 times. Here are 10 common mistakes I see wedding parties make.