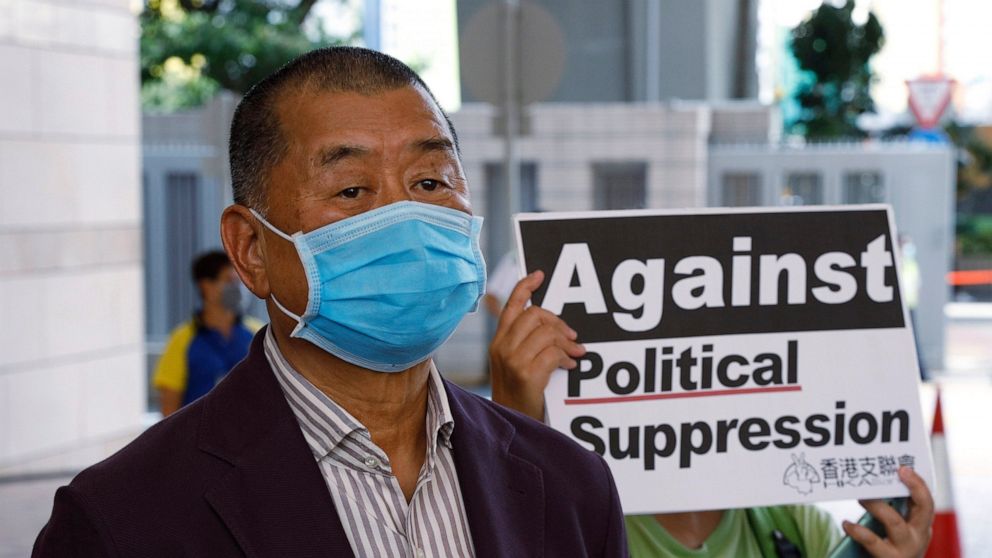 Lai's own freedom is at stake as he fights charges of endangering national security as former publisher of his now-defunct pro-democracy newspaper Apple Daily.

Already serving a 20-month term for other offenses, the 74-year-old Lai could face up to life in prison if he is convicted under a sweeping National Security Law that Beijing has imposed on the former British colony, silencing or jailing many pro-democracy activists.

The high-profile trial slated to begin Thursday has also sparked controversy over whether Lai's British lawyer will be allowed to defend him. Hong Kong's pro-Beijing leader John Lee has asked China to issue a ruling that could block the veteran barrister, Timothy Owen, from representing Lai.

If Beijing intervenes, that would mark the sixth time the communist-ruled government has stepped in despite its promise to respect Hong Kong's judicial independence and civil liberties for at least 50 years after China took over from Britain in 1997.

The Department of Justice has asked for the trial, which will be overseen by three judges, to be suspended pending a decision about Lai's defense lawyer from Beijing.

Lai's legal troubles derailed a stunning career for a man smuggled into Hong Kong from the Chinese mainland at age 12.

After getting only a primary school education, he started out working in a glove factory and sprinted up the ranks to found the casual clothing chain Giordano in 1981. Following the crackdown on 1989 student-led pro-democracy protests centered on Beijing’s Tiananmen Square, he became an outspoken advocate for democracy, founding Next Magazine the year after.

Attacks on Giordano by the Chinese government prompted Lai to sell his shares in the business and devote himself to the media world.

In 1995, Lai launched the Apple Daily, which quickly became one of the city's top selling newspapers with its sometimes outrageous coverage of politics and celebrities. The publication survived a newspaper price war and expanded into Taiwan in the 2000s.

Lai participated in mass protests in Hong Kong in 2019, meeting with then-U.S. Vice-President Mike Pence and Secretary of State Mike Pompeo to discuss since withdrawn legislation that would have allowed criminal suspects to be extradited to mainland China.

Opposition against the bill morphed into months of sometimes violent protests as demands for greater democracy in Hong Kong escalated.

The protest movement, which eventually was snuffed out, lacked any clear leader, but Lai's high profile made him a target of the authorities.

Apple Daily denounced the enactment of the National Security Law in June 2020. Lai told The Associated Press that “Hong Kong is dead,” but said he would stay.

“If I leave, not only do I disgrace myself, I’d discredit Apple Daily, I’d undermine the solidarity of the democratic movement,” he said.

In August that year, Lai was arrested on suspicion of colluding with foreign forces. More than 200 officers raided the offices of Next Digital, Apple Daily's parent company. Arrests of its top executives, editors and journalists and the freezing of $2.3 million worth of assets forced the newspaper to shut down in June 2021. It sold a million copies of its final edition.

In recent hearings, Lai has appeared tanned, possibly due to outdoors time in Stanley Prison — the city’s largest maximum security lockup — and in good spirits.

Next month, Lai is due to be sentenced for fraud related to subletting of office space to a company he also controlled.

In an interview in July 2020, Lai seemed unfazed.

“If I have to go to prison, I don’t mind. I don’t care,” he said. “I cannot worry, because you never know what kind of measures they will take against me.”

Chief would back excavating possible graves at B.C. residential school if elders, community want it

What happens to my youngest daughter’s share of my estate if I die before she’s 18?

JUST IN: DOJ Reportedly Asked the Federal Election Commission to ‘Hold Off’ on Santos While Criminal Probe is Underway

1/27 There has been a lot of smack talk going back and forth between the Cincinnati Bengals and the Kansas City Chiefs as these two powerhouse teams prepare for this ... Read more »

Tom Brady and David Beckham were throwing a pizza party. The close friends met at Miami Slice for a pizza party with their kids while the NFL quarterback deals with ... Read more »

Talk about a cut of good fortune. Stephen Munoz Espinoza of Delray Beach, Florida, could have shown frustration after a stranger jumped in front of him in a line to ... Read more »

NEW YORK (AP) — Amazon is axing free grocery delivery for Prime members on orders less than $150. Customers who get their groceries delivered from Amazon Fresh — and pay ... Read more »

People protest after the death of Tyre Nichols in Memphis (Reuters) – At least some of the officers involved in the traffic stop that authorities say resulted in the beating ... Read more »

A small plane was forced to make an emergency landing on a toll road in Texas last weekend, but instead of hitting pavement the plane briefly brushed the top of ... Read more »

Both home teams are slight favorites for what’s shaping up to be a compelling conference championship weekend in the NFL. The Philadelphia Eagles, the top seed in the NFC, are ... Read more »

JUST IN: Todd Monken to Interview for NFL OC Job

Usain Bolt fires business manager over Jamaica fraud case Jamaican sprinter Usain Bolt tells reporters he is baffled over how $12.7 million of his money has gone missing from a ... Read more »

Fitch ups Greece's rating to a notch below investment grade

The Ending Of Teen Wolf: The Movie Explained

Paramount+ The wolves are back in town — the town of Beacon Hills, to be precise. 2017 seemed to be the end of an era when “Teen Wolf” closed the ... Read more »

The group of volunteers from Kingsland Baptist Church in Katy was organized by TBM Disaster Relief. Read more »

NBC Universal, Inc. The diabetes drug shortage is hitting close to home for many North Texans and it’s causing frustration for those who rely on the medicine for survival. Marie ... Read more »

Todd McShay Says Texans ‘Will Do Everything' for Bears' No.1 Pick

ESPN analyst says Texans will try to trade with Bears originally appeared on NBC Sports Chicago In the eyes of one ESPN analyst, the Bears hold an ineffable amount of ... Read more »

WASHINGTON —  A New Jersey man who joined a mob’s attack on the U.S. Capitol was sentenced Friday to more than six years in prison for using pepper spray to assault ... Read more »

What can you buy for a penny these days? Absolutely nothing. Since most sellers now take cards, almost all coins, let alone old pennies, end up in forgotten jars or ... Read more »

Memphis to release footage of traffic stop that led to death of Tyre Nichols. What we know.

MEMPHIS, Tenn. — Protests are planned across the country Friday ahead of the release of footage of a traffic stop that led to the death of a 29-year-old Black driver. Tyre Nichols, ... Read more »

Lakers News: LA Could Be Without Three Starters Against Rival Celtics

Road strip starts Saturday. Your Los Angeles Lakers kick off a five-game road trip this Saturday with a national broadcast appearance against the East’s top team, the Boston Celtics, but ... Read more »

Pamela Anderson's ex-husband of 12 days, Jon Peters, vows to leave her $10M in his will, 'whether she needs it or not'

Voices: Pointing out that the officers involved in Tyre Nichols’ death were Black is a dangerous distraction

Bowhunter Takes State's No. 2 Buck, While Going No. 2

Alberini poses with his 196-1/8 drop-tine nontypical. Back on November 21st, Massachusetts bowhunter Chris Alberini climbed into his tree stand, trying to hold in his excitement as he hoped to ... Read more »

stock photo of Simply Orange orange juice on a grocery store refrigerated shelf Coca-Cola and Simply Orange Juice are facing a class-action lawsuit after it was revealed that their supposedly ... Read more »

Oceanco 1050H Yacht After a decidedly extravagant debut, Oceanco’s newest superyacht is on the move. The epic 344-footer, known as 1050H, has been spotted in the waters of the Netherlands. ... Read more »

Ahead of a Saturday's bumper Cheltenham meeting (weather permitting!), Tipstrr racing analyst Andrew of Fiosrach has used trends and expertise to identify the likely contenders for the Costwold Chase. Read more »

Rare Green Comet Now Visible in the Night Sky. Here's When You Can Best See It

An extremely rare green comet will soon pass near Earth, returning for the first time in 50,000 years. Discovered less than a year ago, the harmless green comet already is ... Read more »

Elizabeth May says the Green Party will investigate and conduct a “root to branch review” of all of its data-retention systems after member information was mistakenly posted online. “We take ... Read more »

James Dolan says he will keep Knicks for the long haul: ‘I have no plans whatsoever to sell at this point’

James is keeping the Knicks in the Dolan’s. James Dolan, whose ownership has been defined by controversies and losing, revealed Friday that he’ll bequeath his MSG teams to a family ... Read more »

Tesla CEO Elon Musk and a pair of top aides to President Joe Biden met in Washington on Friday to discuss the electric vehicle industry and the broader goal of ... Read more »

The B.C. government said Friday that emergency department services will be available in northern Vancouver Island during set hours going forward so patients and families know when and where to ... Read more »

If you purchase an independently reviewed product or service through a link on our website, BGR may receive an affiliate commission. Delete these 203 malicious iPhone and Android apps before ... Read more »

ABC is throwing everything it has, including a few bottles of booze, at Amy Robach during their contentious mediation talks this week. When networks are trying to get someone out ... Read more »

Conor McGregor at the 2022 Cannes film festival. It’s been a hell of a busy week for the UFC’s biggest star. On Tuesday, reports surfaced that police in Spain were ... Read more »

Social Security benefits are taxable for some people, depending on their income

Up to 85% of your Social Security benefits are counted as taxable income if you meet certain requirements. Read more »

Escaramuza Competitions This Weekend at Fort Worth Stock Show and Rodeo

Cramer's Week Ahead: Fed Decision on Wednesday Could Let the Bulls ‘Party On'

Are You Stuck In A Narcissistic Abuse Cycle? How To Spot The Signs

The police killing of Tyre Nichols: The video America didn’t want to have to watch