Hollywood star recalls 'uncomfortable white blokes' doing the Haka as a childRussell Crowe's comments were played over vision of 1973 All Blacks teamHe was interviewed as part of Araatika! Rise Up documentary by NITVThe doco charts ex-NRL star Dean Widders' efforts to start an Indigenous dance

Movie star Russell Crowe has revealed that as a child he was embarrassed watching white men playing for the New Zealand All Blacks doing the traditional Maori Haka before matches.

Crowe made the comment in a documentary, Araatika! Rise Up, which follows former NRL star Dean Widders in his quest to initiate a traditional dance to be performed before international rugby league matches in the same way the All Blacks perform the Haka in rugby union.

‘I certainly remember as a child watching the very uncomfortable white blokes doing the Haka, and like most other New Zealanders we just knew that really wasn’t how to do it,’ Crowe told the doco, screened on NITV on Australia Day.

His remarks were played over footage of the All Blacks performing an awkward-looking Haka at Cardiff Arms Park, Wales, in 1973 before a match against the Barbarians. 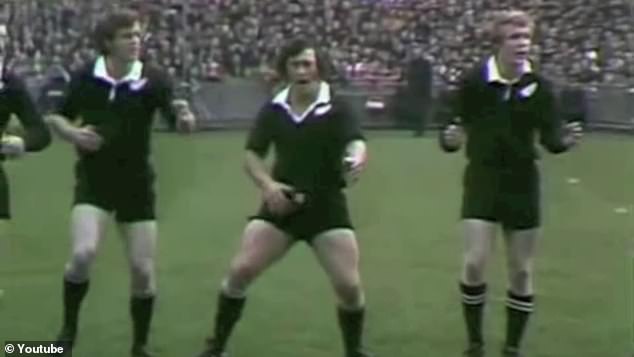 Russell Crowe’s comment about ‘uncomfortable white blokes’ doing the Haka was played over footage of the All Blacks doing it at Cardiff Arms Park, Wales, in 1973 before a match against the Barbarians

The team at the time was mostly composed of players of Anglo-Celtic background, unlike today’s All Blacks team mostly featuring players of Maori and Pacific Island background.

‘Incredibly as the culture has grown, Maori got back involved with [the Haka] and actually sort of said, ‘well, if you’re going to do it, do it properly’,’ Crowe said.

The Haka is now a fearsome beginning to any international rugby match featuring the All Blacks.

Crowe is famously a rugby league tragic who owns the South Sydney Rabbitohs in the NRL.

The star of Gladiator and A Beautiful Mind was born in New Zealand before his family moved to Australia when he was four years old. He returned there for a number of years as a teenager before permanently settling in Australia. 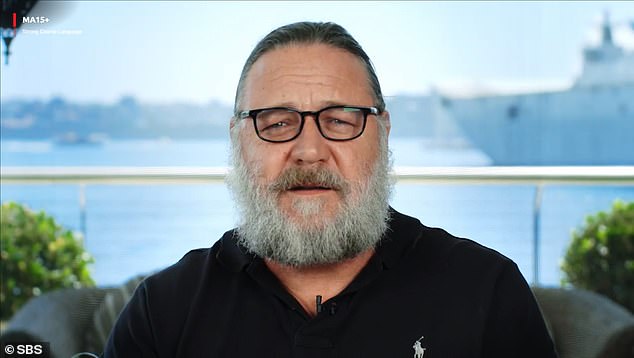 ‘As the culture has grown, Maori got back involved with [the Haka] and actually sort of said, ‘well, if you’re going to do it, do it properly’,’ Crowe said in the Araatika! Rise Up documentary

In the documentary, Widders, the NRL’s Indigenous Pathways Manager, says that white Australia shamed Aboriginal people out of dance, culture and language for many years.

‘That’s why I feel that if the [national rugby league team] Kangaroos do it, our kids get rid of that shame straight away,’ he said.

‘In New Zealand, right, they don’t hesitate to do the Haka or Maori culture because it’s embraced by the rest of the country.’ 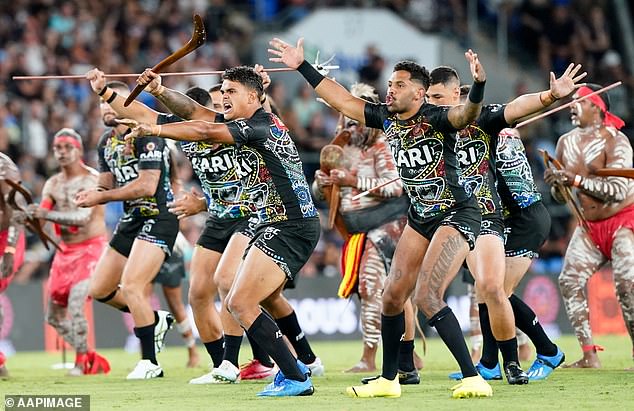 Rabbitohs star Latrell Mitchell (pictured, left) leads the Unity Dance before the NRL Indigenous All Stars vs Maori All Stars match on the Gold Coast in 2020

A pre-game dance celebration known as the Unity Dance has been performed by the Indigenous rugby league team before the pre-season NRL All Stars game since 2015, first led by former star player Greg Inglis and more recently by Rabbitohs’ star Latrell Mitchell.

Widders was the first to conceive of the dance, drawing on the advice and guidance of Bangarra Dance Theatre artistic director Stephen Page to create the performance.

This year’s Indigenous All Stars v Māori All Stars will be played at February 12 at CommBank Stadium in Sydney.