The spiced rums celebrate the history, heritage and people of Salford Docks in Greater Manchester which, in its prime, was the largest port in the UK. With inspiration taking from the Caribbean rums, fruits and spices which landed on the British shore here for the first time. Created by James Harrison and Tommy Gaughan alongside their day jobs, the pairs have made a name for themselves as the founders of a brand that is loved locally, regionally and nationally and Mr Gaughan spoke to Express.co.uk about their journey.

He said: “We created The Salford Rum Company back in 2018. At the time, the gin category was absolutely booming due to buckets of innovation and creativity, so we took inspiration from that sector and set out to make a local premium rum that would rival the luxury gin products on the market – and a product that we ourselves would like to drink.”

“Both of us have always loved rum, and we spotted a gap in the market for a craft spiced rum product that people like us would love to drink. Our wives loved gin, and there seemed to be so much creativity in that sector at the time – we wanted to do the same for rum.

“Salford Rum was intended to be a passion project, we never expected it to grow into what it has become!

“We launched with just a small self-funded investment of £4,000 each to buy our first 200 bottles and have been reinvesting the profits ever since,” he added.

READ MORE: Pensioners could get £800 & free TV licence but thousands missing out – are you eligible? 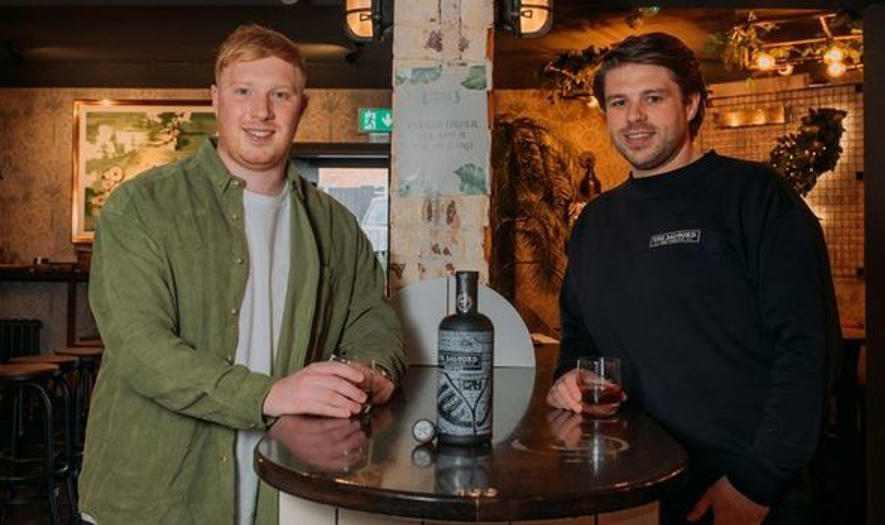 “The fact this is a side hustle has been a huge help. If we were full-time, we would need to take a salary, but instead we have reinvested that cash in growth. So far, we have been able to grow without external investment or large business loans. While we’re not taking home a salary, because we invest back into the business, we sold 39,000 bottles in the last 12 months which is pretty staggering, and we are forecasting 61,000 in the current financial year.”

He continued: “To date, we have created two key expressions; a golden Salford Spiced Rum and Salford Dark Spice, plus a limited-edition Honey Rum that has recently gone into the range full time.

Not only do the small batches ensure that the quality of each bottle is above and beyond all expectations, it also helped to greater the demand for the small supply of delicious rum.

Mr Gaughan elaborated on the other two flavours in the range: “Salford Dark Spice Rum blends specially selected rums from Barbados, matured for up to eight years in ex-Bourbon, American white oak casks. We have combined these pot and column distilled rums with a distinct spice blend to deliver an exceptional Dark Spice rum that delights with flavours of vanilla, coconut, burnt caramel and cloves.

DONT MISS: State Pension age will rise to 68 and keep climbing! 5 things you must do now [GUIDE]Disability Living Allowance to be replaced – who is eligible for the new benefit payment? [INSIGHT]How you can legally reduce Inheritance Tax as thousands more Britons ‘caught in the net’ [GUIDE]

“Lastly, our Honey Rum is blended with locally produced honey to deliver natural sweet and floral notes. It has been created as a tribute to Salford’s dock workers of old, known locally as the worker bees. The floral honey sweetness, coupled with the deep intensity of Salford Rum’s golden spiced liquid, creates a well-balanced flavour with honeycomb, caramel and butterscotch notes on the palate.”

Salford Rum has made its way from being sold to family and friends to being stocked in Co-op and Morrisons around Greater Manchester with its first supermarket listings being made this year for the Dark Spice rum.

However, the journey to side hustle success has not been easy for the founding duo, with Mr Gaughan noting that balancing a thriving business as well as a day job is incredibly difficult.

“It can be tough! We spend many evenings and weekends working on Salford Rum; developing new products and limited edition bottles, liaising with designers and attending craft markets and festivals. 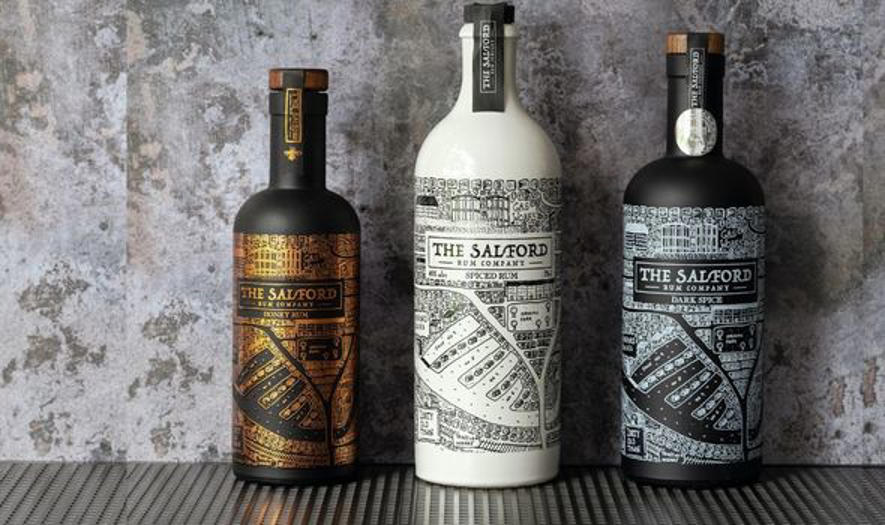 “We have set up the business in such a way that we can manage it mostly from a laptop. We outsource operations, legal, PR and sales and, most recently, we outsourced distribution to another Greater Manchester firm, Ten Locks, which manages a portfolio of progressive, conscious drinks brands.”

Mr Gaughan continued to say that having an ecommerce platform was vital to ensuring Salford Rum stayed afloat during the pandemic, alongside a shift of perspective on priorities of the business.

“A lot of inspiration was taken from the book The Four Hour Work Week, by Tim Ferris. Shopify has been key to our ecommerce growth, particularly during lockdown last year as we quickly pivoted our model to focus on digital and social.

These are generally numbers expected for a full-time business venture, but for a side hustle these profits are astronomical and Mr Gaughan noted that they don’t intend to stop here.

“Excitingly, we are opening our first bar, distillery and rum garden in Greater Manchester in early 2022. We got the keys to the property just this month for premises in an old railway arch in Salford. We’re calling it The Dirty Old Town Distillery after the song ‘Dirty Old Town’ on The Pogues’ 1985 album Rum Sodomy & the Lash. Work to transform the space into a fully functioning distillery and bar is starting now and we can’t wait to see how it will look.

“We also have some exciting new products in the pipeline, and hopefully more supermarket listings on the horizon. Exciting times ahead,” he concluded.

Here's a lip-smacking recipe of a classic Indian breakfast

I like food fads. They represent the best of people's creativity: Chef Gary Mehigan

20 of the best low-carb vegetables, according to dieticiens

These organic sooji offerings make for a variety of dishes

This $10 Plastic Tap Is The Ridiculous Item Your Breakfast Needs

© Bang Showbiz John Travolta John Travolta is “so proud” of his daughter’s “kindness and strength”. The ‘Grease’ star lost his wife Kelly Preston in July 2020 when she lost ... Read more »

Leytonstone McDonald's is shut down after MICE overrun kitchen

© Google thumbnail_image.png A McDonald’s branch where mice overran its kitchen has been shut down due to “an imminent risk to public health”, environmental health inspectors said. Customers sitting down ... Read more »

Gemma Collins has jumped at the chance to support Tilly Ramsay after an old tweet from LBC host Steve Allen was dug up and reported on. Headlines this week have ... Read more »

Halyna Hutchins and Joel Souza: What we know about the victims of the Alec Baldwin Rust shooting

India seizes $2.7bn of heroin from Afghanistan at port

© Provided by The Guardian Photograph: Ghulamullah Habibi/EPA Nearly three tonnes of heroin with a street value of $2.7bn (£2bn) from Afghanistan have been seized from a western Indian port ... Read more »

© James Manning Walkers taking part in the Grenadier Walk of Oman during a break at Horse Guards Parade, Whitehall, central London (PA) The Duke of Sussex made a surprise ... Read more »

How it feels to go into space: ‘More beautiful and dazzling and frightening than I ever imagined'

It was a balmy morning in the west Texas desert when Chris Boshuizen stepped into Jeff Bezos’ Blue Origin rocket capsule for a journey most of us will never experience. ... Read more »

Burnt Out by the Pandemic, the Owners of Alice's Tea Cup Consider Selling Their Business

© @mjtrimble/Pixabay nightclub221021v1a.jpg Two men have been arrested in connection with a spate of reported drink-spiking incidents involving needles in Nottingham. Nottinghamshire Police said the men, aged 18 and 19, ... Read more »

© Provided by The i The UK Government should have followed Israel’s lead to fight the third Covid wave by ramping up its booster jab programme much earlier, an expert ... Read more »

© Alamy Stock Photo THE DEPARTMENT OF Health has confirmed that free contraception for young women will be made available in August, 2022.  Minister Stephen Donnelly said that it is ... Read more »

Who is Halyna Hutchins? Tributes paid to cinematographer shot by prop gun discharged by Alec Baldwin

© Getty Images 2018 Sundance Film Festival Official Kickoff Party Hosted By SundanceTV Tributes were today paid to director of photography Halyna Hutchins, who died after she was shot by ... Read more »

Cases of spiking by injection are difficult to police because of the “subterfuge and modus operandi of the attacker”, a former senior police officer has said. More thorough door searches ... Read more »

A 39-year-old man who was found guilty of murdering his wife Anne Colomines in their Dublin home four years ago has been sentenced to life in prison. Renato Gehlen, a ... Read more »

‘I've trained with Prince Harry, lost my legs in Helmand – now I'm on course to be a bobsleigh world champion'

Atlanta Is Getting Its First 24-Hour Automat Dispensing Dumplings

© Brooklyn Dumpling Shop The pastrami dumpling. Blame it on the meteoric rise in demand for even faster food during the pandemic, but Atlanta is getting its first 24-hour automat ... Read more »

© Provided by Food & Wine Maison Ferrand At its core, the aging process for alcoholic beverages is painfully simple: Just let it sit there and don’t drink it! But ... Read more »

© AP Myanmar’s junta has re-arrested more than 100 anti-coup protesters freed in a recent amnesty, according to a local monitoring group that tracks detentions and killings in the country.  ... Read more »

© Jacob King Stewart Edgar, 53, arriving at Birmingham Crown Court on the first day of his trial. (Jacob King/PA) A chief fire officer has been cleared of fraud after ... Read more »

© Oli Back Silk Stream along the border of Harrow and Barnet Harrow Council has been approved to build wetlands, restore stretches of river and form areas of natural drainage ... Read more »

© Bang Showbiz Adele Adele says her divorce from Simon Konecki was her “biggest risk”. The ‘Easy on Me’ hitmaker – who announced their breakup in April 2019 after a ... Read more »

© Adobe Little Simz Home is… North London. I grew up there. Where would you recommend for a first date? I’d go rock climbing. I think activities are fun as ... Read more »

One of NYC's Most Charming Cheese Shops Expires — and More Closings

© Bang Showbiz Mike Fisher and Carrie Underwood Carrie Underwood gets frustrated with her husband’s belongings cluttering up their home. The ‘Love Wins’ singer has revealed what really grinds her ... Read more »

© PA Archive Drink spiking arrests Two men have been arrested on suspicion of conspiring to administer poison in connection with a spate of reported drink-spiking incidents involving needles in ... Read more »

Clubbing Q&A: Queuing at the bar, Covid certs and staying out until 3am – what you need to know if you're heading out tonight

Compartment No.6 film review: Stripped down simplicity makes for a richer experience

Halloween 2021: Best horror films you should watch for every mood and occasion

I tried chicken wings from 4 restaurant chains, and the best ones were only $1 each

What is LaLiga TV and how can I watch?