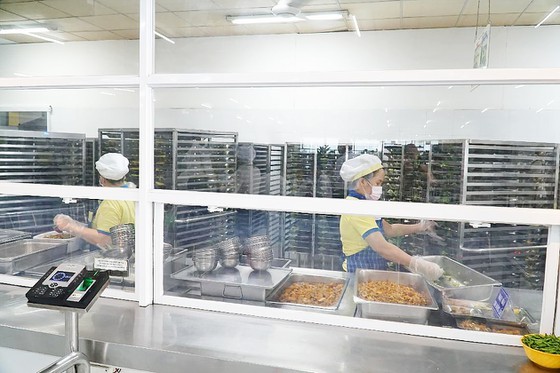 Employees of a school are preparing food for students (Photo: SGGP)

Though the new school year has just started for two weeks, food poisoning cases have been reported in schools. Statistically, the country reported 57 poisoning cases causing 1,574 hospitalizations including 19 deaths by August, 2020.

According to the Ministry of Health, 48 poisoning cases have been driving 824 people into hospitals by June, 2020 and 17 people were dead due to food poisoning. From the beginning of the year till now, though not many cases of poisoning have been reported, hospitalizations are high and more people have succumbed to it.
Head of the Food Administration of Vietnam Nguyen Thanh Phong said that food safety in industrial parks and schools still pose a threat because of businesspersons’ low awareness of the matter plus they are ready to violate the regulation for profit.
Moreover, a large of consumers accept cheap food without clear indication of origin. Worse, it is hard to monitor supplies of food materials for kitchens in industrial parks, caters, and schools whereas there have been a boom of small-scale cater business establishments.
According to the Food Administration of Vietnam‘s statistics, more than 500,000 food business establishments have been operated in the country and 85 percent of them are small-scale household business facilities.
Approximately 70 percent of poisoning cases relate to caters which transport food without good preservation, said Mr. Phong.
Following cases of poisoning, the Food Safety Management Board in HCMC advised parents to take part in supervision of food safety in schools and school managers should facilitate parents’ supervision of food safety, said Pham Khanh Phong Lan, Head of the board.
To prevent the incident, inspectors have paid scheduled visits to cater facility and imposed fines if they detect violations. More importantly, education is needed to change people’s awareness of the matter and the government should set a criteria for students' meal portion.
Ms. Lan said the board and the Department of Education and Training have signed agreement on food safety in schools. The two sides arrived at an agreement that food materials must be supplied by business establishments in the city’s safety supply chains or facilities achieving HACCP, ISO 22000:2005, VietGAP, and GlobalGAP.

Offers gifts to the armed forces, to border residents of Laos

Ceremony of handing over gifts to the armed forces, to border residents of Laos, on September 23 at the border gate A Dot – Ta Vang. Photo: VNA /CVN Colonel Nguyên Xuân Hoa,... Read more »
24/09/2020

The body of a foreign man has been found floating in the sea off the central province of Quang Nam. At around 5 pm on Wednesday, while bathing in Thong Nha Sea, some... Read more »
24/09/2020

French and Vietnamese movies to be screened in Hanoi

The French cultural centre L’Espace in Hanoi is due to host film screenings with the theme of “Fashion week 2020” next week, featuring a number of French and Vietnamese movies on the fashion... Read more »
24/09/2020

Bamboo Airways on Wednesday safely repatriated nearly 270 Vietnamese citizens left stranded in Australia and New Zealand due to the impact of the COVID-19 pandemic. Read more »
24/09/2020

First international flight to Vietnam is from South Korea

No new cases reported in the last 12 hours in Vietnam