Gold coins from the Gupta period dating back to around 1,700 years ago, as well as ancient jars, seals and statues, sit in retired postal employee Chitta Ranjan Biswas’s home. It is the site of an unusual village museum in Debagram, in West Bengal’s Nadia district, holding artefacts found across the area, particularly along an ancient and now-extinct river known in historical records as the Marali.

It was the river that started it all, all those centuries ago and indeed in recent years. Biswajit Roy, a geography professor who lives near Debagram, was studying palaeo-channels (ancient, long-extinct rivers) for his PhD when he stumbled upon scores of pot shards near a mound that promised more. This was in 2012.

Roy decided to take his finds to the villagers of Debagram, and together they have since made numerous more: pottery, seals, coins, sculptures from what is now referred to as the Debalgarh site. Most have come from across a 20-sq-km area that holds numerous ponds, with glimpses of built-and-now-buried structures all through as well.

A local committee was set up to preserve and protect these artefacts. By 2016, the collection had grown so large that Roy began to work with the villagers to find it a proper home. Biswas volunteered the space. A neighbour donated cases to house the artefacts in. The museum was opened in 2017 (it’s free and open all week). 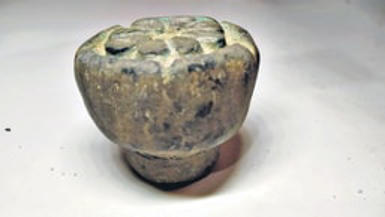 © Provided by Hindustan Times A terracotta seal with a lotus motif. The artefacts found in the region suggest that the ancient town had a bustling trade, wealthy merchants and extensive connections with distant lands.

This room, then, holds gold coins most likely issued during the reigns of Samudragupta (who ruled from about 330 to 380 CE); terracotta seals with a lotus motif; several Bengal-made amphoras (inspired by the tall jars with two handles and a slender neck used in ancient times in the Mediterranean region). All of which suggests that the ancient town had a bustling trade, wealthy merchants and extensive connections with distant lands.

Even today, new artefacts are being added. Locals routinely turn up more when working in fields or during construction. Almost a dozen stone sculptures of Goddess Tara (estimated to be from the 10th to 11th century CE) and of Vishnu (c 8th to 9th century CE) have been found. A palm-sized metal sculpture of the rare Muchalinda form of the Buddha (as a meditative figure guarded by a giant hooded snake; c 5th to 6th century CE) has also been recovered.

The museum and the findings have drawn attention from time to time. In 2018, the monthly bulletin of the Asiatic Society described Debagram as a new destination for archaeo-tourism in West Bengal.

The Archaeological Survey of India (ASI) has not yet excavated at or visited the Debalgarh site. Shubha Majumder, ASI superintending archaeologist for the Kolkata Circle, says there are plans to. Work has been underway across the archaeologically rich Nadia district, he says. “In March 2020, we were planning to explore the Debalgarh site but that did not work out due to the pandemic. We are hoping to visit the site either this year or next.”

There are so many such sites across West Bengal, Majumder adds, that local museums have come up from time to time, in villages, at local libraries. “In the case of the museum at Debagram, we have asked Roy to register all the artefacts recovered, which will eventually be formally registered as per the provisions of the Antiquities and Art Treasures Act, 1972.”

Russia has made plans for aggressive moves against Ukraine, says Blinken

Tabitha Brown says her personal growth journey inspired her vibrant new kids' show: 'I deserve to show up just as I am and I am enough'

You Can Crush This 2-Move Bodyweight Workout Anywhere

Photo credit: YurolaitsAlbert – Getty Images Whether you’re travelling to visit family, on household duties with the kids, or simply just don’t have the time for an enormous workout, there’s ... Read more »

Tim Roxborogh shares 10 things he has learned about New Zealand during the pandemic. Two years ago, I flew out to the States to film what co-host Carolyn Taylor and ... Read more »

Charles dives into history of Barbados on trip to archive

Prince Charles learns about the long history of the new republic of Barbados as he is given a tour of the country’s National Archives. Accompanied by prime minister Mia Mottley, ... Read more »

© Provided by Business Today Hero Electric is India’s highest-selling EV brand with 36% market share, shows study Despite the economic slowdown in the market due to the COVID-19 pandemic, ... Read more »

This viral video of a tigress and her cubs will make you smile. Watch

A wonderful video of a tigress leading her cubs along a path has gone viral on Twitter. The clip shared by IAS officer Supriya Sahu shows three cubs prancing behind ... Read more »

© Provided by DNA Khanna Gems, the world’s most reputable gemstones company, has undergone a complete transformation in a year. Its official website www.khannagems.com was redesigned to provide more information ... Read more »

© Provided by The Indian Express Instead of reaching out for cold drinks to quench your thirst, why not try natural drinks that are not only delicious but also help ... Read more »

The portable XGIMI Halo+ projector is all set for launch in the Indian market. According to the company, the projector will be launched with a slew of “never-before” features. The ... Read more »

© Provided by The Times of India KOLKATA: Former Bengal skipper Anustup Majumdar returned to the Bengal squad for the Vijay Hazare Trophy (50-over) meet after being left out of ... Read more »

© Getty Images Oval Invincibles were the inaugural winners of the women’s Hundred © Getty Images The ECB has more than doubled salaries for female players in the second season ... Read more »

© Provided by Bears Wire The Chicago Bears are pretty thin at cornerback right now, and aside from Jaylon Johnson, there’s been nothing to write home about. According to ESPN’s ... Read more »

© Provided by Colts Wire The Indianapolis Colts are hoping to see the return of wide receiver Parris Campbell this season and there is some hope that the speedy wideout ... Read more »

Brian Kelly Explains Why He Left Notre Dame For LSU

© Provided by The Spun Head coach Brian Kelly of the Notre Dame Fighting Irish leaves the field after a game against the Temple Owls. After shocking the college football ... Read more »

Karisma Kapoor looks timeless in a designer Kanjeevaram ethnic look, proves every saree has a story to tell

Karisma Kapoor has been spotlighting her love for traditional wear for years now. The star’s ethnic wardrobe is all about thoughtful pieces that display exquisite craftsmanship. Her envy-worthy collection of ... Read more »

Just ahead of No Entry 2, Fardeen Khan stuns with his 360 degree transformation at Tadap premiere — view pics

© Provided by BollywoodLife.com We reported that Anees Bazmee is all set with No Entry 2 that will be set across two time zones and have a huge ensemble cast. ... Read more »

© Provided by UGA (Georgia) Wire Georgia football is on fire in recruiting and on the football field. Head coach Kirby Smart and the University of Georgia have the No. ... Read more »

Gimme Him: One player Giants would steal from Dolphins

© Provided by Giants Wire The New York Giants (4-7) will visit the Miami Dolphins (5-7) at Hard Rock Stadium in Miami Gardens, Florida this Sunday afternoon. That, of course, ... Read more »

© Provided by Pinkvilla   Olivia Rodrigo, H.E.R., and The Weeknd all took home awards at the redesigned Apple Music Awards, which have expanded to include worldwide music trends. Rodrigo ... Read more »

© Michael Chow/The Republic / USA TODAY NETWORK Arizona Cardinals running back James Conner James Conner seems to have found a home with the Cardinals. As he plays out his ... Read more »

© Provided by Patriots Wire Arguably the two best teams in the AFC will square off on Monday night in Week 13. The New England Patriots will hit the road ... Read more »

© Provided by Trojans Wire Amid all the other news stories popping in the wake of Lincoln Riley’s arrival at USC, prime prospect Domani Jackson has narrowed his list down ... Read more »

Tua Tagovailoa hit his 16th game started last week when he and the Dolphins beat the Carolina Panthers 33-10 to win their fourth game in a row. With 16 starts ... Read more »

Chicago vs. Arizona: Which Cardinals player would you want on the Bears?

© Provided by Bears Wire The Chicago Bears (4-7) will host the Arizona Cardinals (9-2) on Sunday, where Chicago will be looking to upset Arizona to keep in the thick ... Read more »

© File photo Sep 4, 2021; Austin, Texas, USA; Texas Longhorns head coach Steve Sarkisian and players sing The Eyes of Texas along with fans after a victory over the ... Read more »

© Provided by Wolverines Wire No. 2 Michigan has made the Big Ten Championship Game for the first time since the Big Ten started the annual game between the two ... Read more »

© Provided by Auburn Wire Auburn is squarely in the mix for one of the top players in the 2023 recruiting class. Justin Benton is the No. 34 defensive lineman ... Read more »

The Miami Dolphins got some good news Wednesday morning before they went out to practice. At his media availability, head coach Brian Flores announced that wide receiver DeVante Parker and ... Read more »

© Provided by Texans Wire texans-colts-point-spread-over-under-week-13 The Houston Texans complete their season series with the Indianapolis Colts Sunday at 12:00 p.m. Central Time at NRG Stadium. The Texans are playing ... Read more »

Mock Draft 1.0: Eyes are on defense with an iffy quarterback group

© Provided by Seahawks Wire MORE: Seahawks know they need to get D.K. Metcalf more involved in offense Seahawks drop all the way to No. 27 in Week 13 NFL ... Read more »

Do away with big IPL auction say Capitals and KKR heads

'We're not Mohun Bagan, we have to fight polls': Derek O'Brien after Mamata's attack on UPA

'Trying to give 75% reservation to all locals in Haryana': Dushyant Chautala