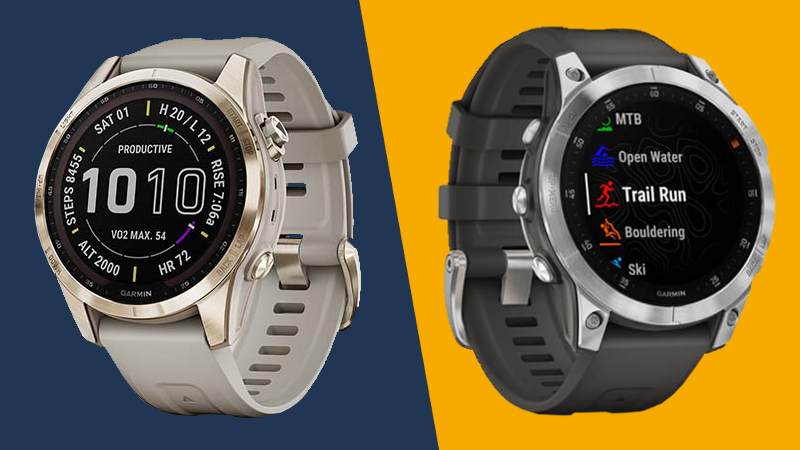 The Garmin Fenix 7 and Garmin Epix might look similar, but there are some important differences between the two. If you’re thinking of investing in one of these top-tier sports watches, this guide will help you decide which is the right one for you.

There’s only one Epix model, but there are nine different Fenix variants in different sizes, some with solar charging, and some with extra-tough sapphire crystal instead of glass covering the face. If you have particularly small wrists or want the longest possible battery life, or enjoy sports like outdoor rock climbing where a regular sports watch may get scratched, then a watch in the Fenix range will probably be the best choice for you.

However, the Epix has one big advantage over Fenix watches: a bright, high resolution AMOLED display, which makes charts, maps and graphics really shine. It’s much more vivid than the memory-in-pixel (MiP) displays of watches in the Fenix 7 range, but it does put more demand on the battery, so an Epix watch will need charging more frequently.

These are premium watches, and none of them come cheap, but the base specification Fenix 7 costs significantly less than the standard Epix. However, that price soon increases when you start adding features like solar charging and premium materials such as titanium and leather.

If you’ve made up your mind, we’ve rounded up the best prices for the Fenix 7 and Epix right here. If not, read on for more details on both watches.

First, it’s worth clarifying something – while the new luxury watch is usually referred to as the Epix, it’s technically the Epix 2.

The first Epix watch was released in 2016, and was somewhat ahead of its time. It was a touchscreen smartwatch with impressive mapping tools, but it was, frankly, enormous. “If all else fails this beast could probably act as a weapon when slung at a hungry bear,” wrote Pocket Lint in an otherwise glowing review.

At a presentation in January 2022, Garmin explained that tech has finally caught up with its ambitions for the Epix, hence its decision to bring back the name.

There’s no solar version of the Epix available, and it only comes in one size, but you can take your pick from titanium or stainless steel cases. There’s also a model with a sapphire crystal lens, which is more resistant to scratches than toughened glass, though at the time of writing this isn’t available in the US. 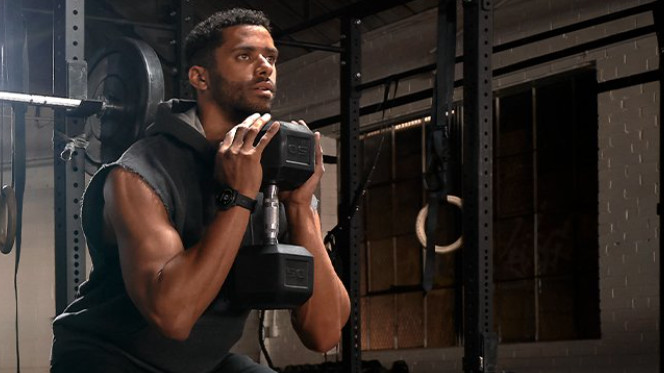 The Fenix 7 gives you a lot more choice, In fact, it’s not a single watch, but an entire range. It’s available in 42mm, 47mm, and 51mm models, all of which come in three versions: standard, Solar, and Solar Sapphire. The last of these uses tough sapphire crystal, with a photovoltaic layer under the surface.

These are all the versions currently available:

The standard Garmin Epix is more expensive than the standard Fenix 7, but different versions of both watches carry different price tags. Sapphire crystal and solar charging add to the price, as do premium materials like titanium and leather.

At first glance, the watches in the Garmin Fenix 7 line look very similar to the Garmin Epix. Both are chunky and rugged, with metal-fronted resin cases. There are five physical buttons, with a metal guard around the start button on the top right to protect it from damage and accidental presses

All Fenix 7 and Epix watches are available with a choice of stainless steel or titanium cases. They’re all compatible with Garmin’s quick-release bands too, allowing you to choose from various silicone, woven, leather, and metal straps.

There are some key differences, though. The most important of these is that (as we mentioned earlier) the Epix is only available with a 47mm case, while Fenix 7 watches are also available in 42mm and 52mm versions.

There’s some variation between these sizes, too. Like the Epix, the 47mm Fenix 7 and the 52mm Fenix 7S have exposed screws on the lugs. The 42mm Fenix 7S, however, has a more streamlined look for smaller wrists, and no visible screws. 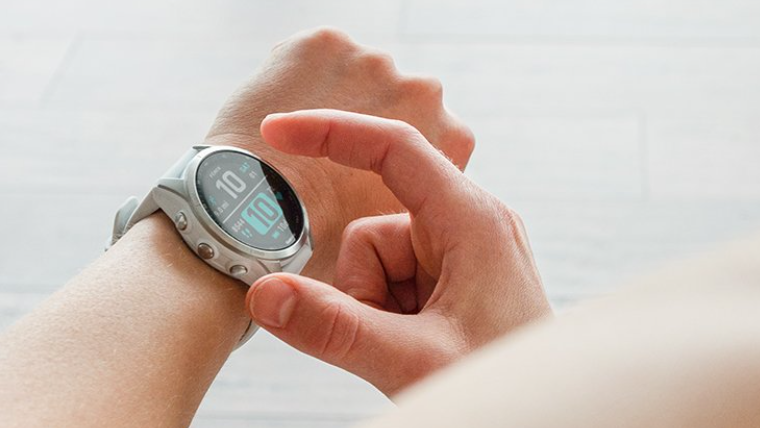 The Garmin Fenix 7S had a streamlined case with no visible screws (Image credit: Garmin)

Beyond that, the only significant design difference between the Epix and the Fenix 7 series is the screen…

Watches in the Fenix 7 line have transflective memory-in-pixel (MiP) displays, while the Garmin Epix has a color AMOLED screen.

That means that the Epix is much brighter and more vibrant, with a fast refresh rate that lends itself well to tools like on-screen animations to guide you through yoga and Pilates workouts. It also has an always-on option, so you don’t have to raise your wrist to activate it.

The Fenix 7’s MiP screen isn’t as striking, but it’s clearly visible in most lighting conditions, and has a backlight that can be activated with a press of the top right button. It uses less power than an AMOLED display, which results in longer battery life. 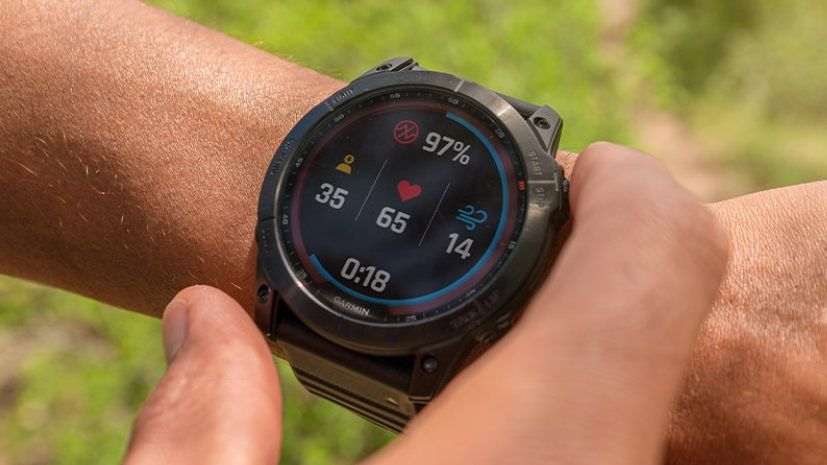 Watches in the Fenix 7 range have color MIP displays, which are less vivid but use less power than AMOLED (Image credit: Garmin)

Here are the maximum battery life figures for the standard Garmin Fenix 7 and the Garmin Epix, both of which have 47mm cases and no solar cell:

If you mostly train outdoors, it’s well worth checking out the Fenix 6 solar models, which last a remarkably long time between charges provided they get a regular dose of sunlight. Battery life for the 52mm Fenix 7X Solar is particularly impressive due to its extra large solar cell.

To give you an idea, here are the battery lives of the 47mm Fenix 7 Solar and the 52mm Fenix 7X Solar with three hours of direct sunlight per day. As you can see, size really does matter.

When it comes to everyday watch features, the Epix and Fenix 7 are pretty much identical. Both have music storage for 2,000 songs, allow you to control your phone’s music player, and offer Garmin Pay for making contactless purchases.

Watches in both lines can receive smartphone notifications, and will alert you to incoming texts and calls. However, unlike the Garmin Venu 2, the Fenix 6 and 7 don’t have microphones that allow you to answer calls from your wrist. You can, however, reject a call with a text message if you have an Android phone. 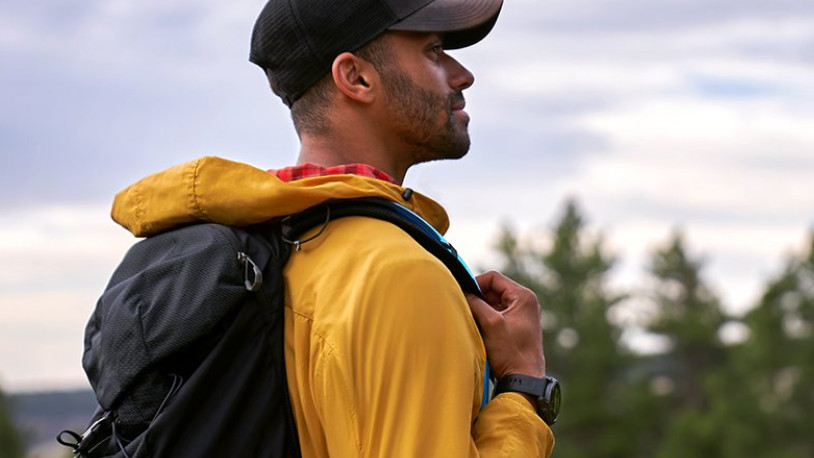 All Epix and Fenix 7 watches also have super accurate multi-band GPS, and come preloaded with a set of Garmin’s detailed maps free of charge. The watches’ touchscreen interfaces make it easy to pan around maps, though the higher resolution of the Epix allows you to see more detail and makes map icons clearer.

Garmin itself has said that the Fenix 7 series are designed with ‘elite’ athletes in mind – particularly those who enjoy a range of outdoor sports – while the Epix is perhaps better suited to those who like working out in the gym.

That’s largely due to the Fenix 7’s optional solar charging; when it comes to actual fitness tracking and training tools, the two watches are extremely similar. Both have Garmin’s latest optical heart rate monitor, SpO2 sensor, and temperature sensor, and are capable of tracking heart rate, sleep, blood oxygen saturation, stress, and respiration 24 hours a day.

There are preset profiles for dozens of activities (including triathlon and duathlon), plus training tools to help you monitor and improve your performance, such as real-time stamina tracking. This lets you see how much gas you have left in the tank during a run or bike ride. If your stamina is running low, you might want to ease off the pace, but if you’ve still got plenty of energy left then you may choose to push yourself harder for the last part of your workout.

You can also use any Fenix 7 or Epix watch to check your seven-day training load on your wrist. This is presented as a bar chart showing your training load each day, the type of training (base, tempo, threshold, speed etc) represented by a color, and whether your tracked activities are having a positive impact on your fitness. You’ll also see a number representing your training load that will help you judge if you’re at risk of under- or over-training. 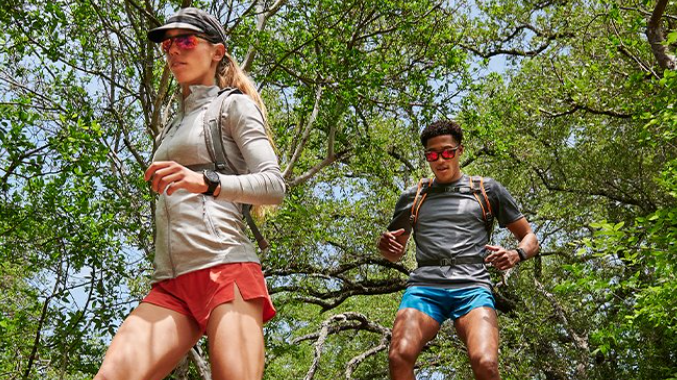 Watches in the Epix and Garmin Fenix 7 series let you see your seven-day training load on your wrist (Image credit: Garmin)

Watches in the Fenix 7 and Epix lines can also display a visual race pace predictor, which estimates your time for a 5k, 10k, half marathon, and marathon based on your current fitness, complete with a line graph showing how that prediction has changed as a result of your recent training.

One feature that you’ll only get with the Epix is a set of animated workouts that you can follow on your wrist. At the moment there’s a handful of programs for Pilates and yoga, but we expect more are likely to come in the future. These make use of the Epix’s bright AMOLED display – as do Garmin’s Muscle Map graphics, which illustrate which muscle groups you’ve worked most recently.