Linda Calvey, 63, was left shocked when workmen started tearing up the pathThe workers dug outside her property in Duston, Northamptonshire, last monthA 30ft pole was put in place at the end of her driveway, which 'looks like a stake'The English tutor believes her property has been devalued by around £30,000

A grandmother claims £30,000 has been wiped off the value of her £480,000 home after BT erected a ‘monstrous’ 30ft broadband pole yards from her door.

Linda Calvey, 63, was shocked when workmen started tearing up the path outside her home in Duston, Northamptonshire, without warning last month.

A 30ft wooden pole was put in place at the end of her driveway, which she says looks like medieval gallows or a stake.

She has also likened the ‘eyesore’ that towers above the house to a giant totem pole, which left her feeling ‘devastated, crushed and depressed’.

The English tutor, who has lived in the 1950s three-bedroom detached house for almost 30 years, believes her property has been devalued by around £30,000.

She also says her attempts to resolve the situation has left her stuck in a system of ‘Kafkaesque bureaucracy’. 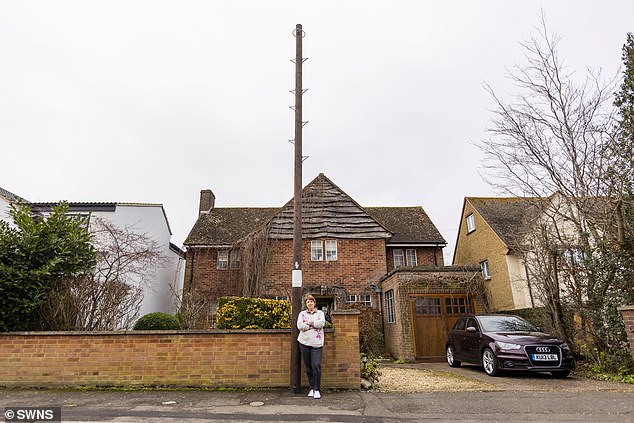 Linda Calvey (pictured), 63, was shocked when workmen started tearing up the path outside her home in Duston, Northamptonshire, without warning last month 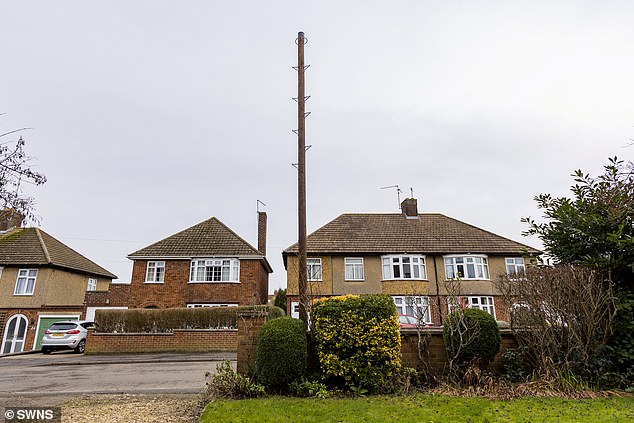 A 30ft wooden pole was put in place at the end of her driveway, which she says looks like medieval gallows or a stake

The pole was erected by the telecoms giant on January 20 as they worked on upgrading internet speeds in the area.

‘It’s just an ongoing stress of opening the front door and having this thing in your face all the time.

‘We’ve always had a reputation for having the prettiest house in the area but now I feel embarrassed.

‘I am crushed and depressed. The pole is like a stake or a gallows outside our front door. 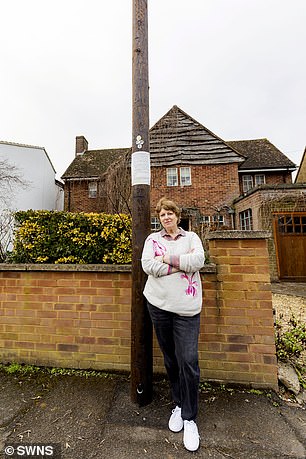 She has also likened the ‘eyesore’ that towers above the house to a giant totem pole, which left her feeling ‘devastated, crushed and depressed’

‘Moving it to the other side of the drive would at least have assuaged the brutal effect.

‘How can this company ride roughshod over the aesthetics of a house and the feelings of those who have a monstrous structure thrust upon the daily interaction they have with their home?

‘The sense that we, as individuals and taxpayers, have no rights whatsoever is overwhelming.

‘This house is an arts and craft-style house. It is probably valued around £480,000 but now, after this, it would struggle to realise that price.

‘We are probably looking at around £30,000 being wiped of the value of our property.’

She added: We were looking to downsize eventually. This is massively going to put viewers off.’

BT Openreach had placed a small letter of notice half-a-mile away from the house, which she never saw due to knee problems which prevent her from walking too far.

Ms Calvey slammed BT for not personally giving her any notice of the pole which has left the view from her house ‘cut in two’.

The tutor, who moved into her home with husband Michael, 65, in 1996, said: ‘The first we knew of it was when he woke up to a racket outside our home.

‘I rushed out to question them and they said it was a permitted development.

‘Prior to this, there had been a notice put up half-a-mile down the road but we never go down there; we couldn’t have seen it, so we couldn’t object. 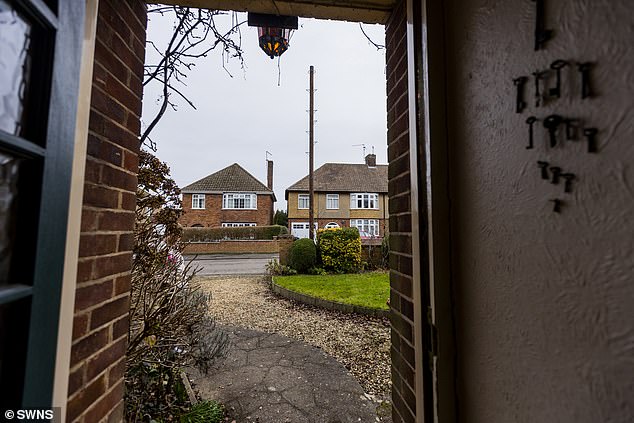 The English tutor, who has lived in the 1950s three-bedroom detached house for almost 30 years, believes her property has been devalued by around £30,000

‘There was no pre-warning, no letter to us, nothing. Apparently, they don’t have to warn you as a household. It is common courtesy, they should have let us know.

‘I told the workers we haven’t seen the sign for the planned pole erection and they just said: ”No. The pole is going up”.

‘Then last Friday morning, two BT engineers turned up and admitted, quite sheepishly, that they are doing the work.

‘It seemed they were trying to get ahead of their rivals in getting broadband here first. I got the impression that even they thought it was unacceptable.

‘We have been left devastated by this monstrosity outside our home – it was twice the size of the house.

‘It its horrible and medieval. Why can’t they use cables instead this unsightly pole?

‘It seems they just plucked a random house on the street. It has completely cut our view in half. The other poles in the street are not in such obtrusive positions.’

After emails to BT, her local MP, Northamptonshire County Council and a BT Pole Objection Team in Liverpool, Ms Calvey claims she has been ‘totally overlooked’.

The grandmother-of-two added: ‘I immediately got hold of a team based in Liverpool called the Pole Objection Team and told them.

‘I retrospectively wrote them a complaint but heard nothing from them. 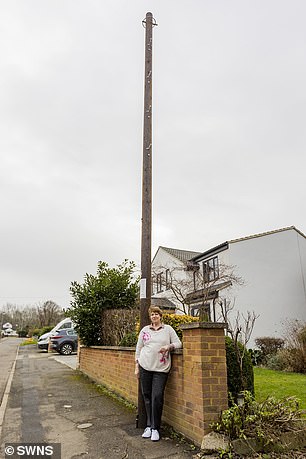 After emails to BT, her local MP, Northamptonshire County Council and a BT Pole Objection Team in Liverpool, Ms Calvey claims she has been ‘totally overlooked’

‘We have contacted Northamptonshire County Council and they said it was a permitted development and to contact BT. They have wiped their hands of it.

‘We even contacted our local MP’s and they said they have had many similar complaints but said it is unactable.

‘We have been totally overlooked. BT, being a big corporation, has just made me feel completely helpless as an individual.’

‘Our full fibre build in Northamptonshire has already passed more than 70,000 local homes and businesses, who can now order some of the UK’s fastest, most reliable broadband from their chosen provider, and work continues on the ground.

‘Wherever we can, we use our existing duct-and-pole network to avoid digging and disruption.

‘But in order to include some properties in the upgrade, we may need to put up new poles.

‘We strive to select and site our infrastructure sensitively, balancing this with the need to meet local broadband demand.

‘Poles need to be in the right place to provide internet, TV and other services to properties, must avoid other underground services like gas and water pipes and drainage, and meet regulations on space left on the pavement for pedestrians, cyclists and prams.

‘We follow the same statutory process as other network providers to install telecoms infrastructure on public land. We’ve asked our teams to take a look at this.’