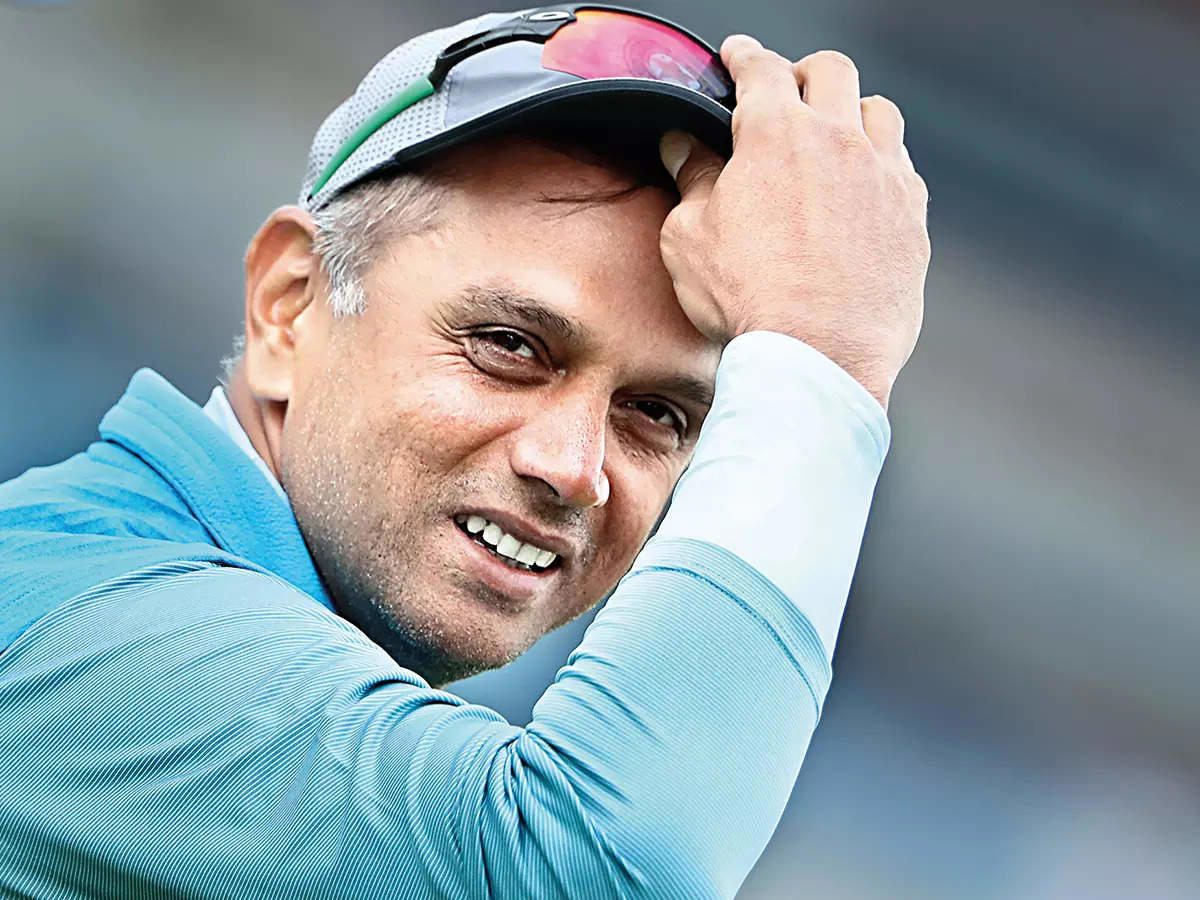 Late on Friday night, as most cricket fans were revelling in Chennai’s comeback IPL win, reports came in that batting great Rahul Dravid is set to take charge as Indian cricket team’s head coach on a two-year contract. Since Dravid had been offered this role several times in the past and he had politely denied each time, fans were pleasantly surprised. Apart from being one of the best batters the game has seen, Dravid is easily one of the most liked and respected figures in cricket. In addition, he brings to the table unparalleled experience in coaching, having been the coach of India ‘A’ and India U-19 teams for the past several years. Under his stewardship, the U-19 team won the World Cup in 2018 and the ‘A’ side has served as a feeder for the senior team, producing several players like Rishabh Pant, Shreyas Iyer, Prithvi Shaw, and Mayank Agarwal among others. Dravid was the interim coach of the second Indian side in the Sri Lanka tour recently as the main squad – led by coach Ravi Shastri – was in England. But pretty soon, he will assume command full time.

If it’s true Rahul Dravid is to be the next Indian coach I think the rest of the world better beware … !

Till yesterday news reports were saying Rahul Dravid was going to stay at the NCA. Yet early morning news broke of… https://t.co/EUTeyvtlH7

As soon as the news broke in the intervening night of Friday and Saturday, social media was buzzing. The reactions ranged from Indian fans’ elation to cricket pundits’ appreciation

Dravid’s graduation from the coach of the development teams to the main team is in line with how he was as a player too. Over the years, he became famous for standing up for the team whenever he was needed, in whatever role he was needed. He started as a batter, transformed himself into a wicketkeeper, and even captained the team when nobody else wanted that job. During his playing days, there was a popular joke in the cricketing circles about Dravid’s famous dedication for the Indian team: “If the captain asks Rahul Dravid to walk on water, he’d simply ask, ‘How far?'”

Dravid, Ganguly and Mhambrey: The Class of ’96 in charge of Team IndiaWith Dravid all set to assume charge as the full-time head coach of the team, the class of ’96 will virtually be running Indian cricket for some time. Apart from head coach Dravid, bowling coach Paras Mhambrey and BCCI President Sourav Ganguly all made their name on the Indian cricket team’s tour to England in 1996. Dravid famously made his Test debut for the Indian team on that ’96 tour, scoring 95 in his first game at Lord’s. He was upstaged by another debutant – Bengal batter Sourav Ganguly, who scored 131. Both Dravid and Ganguly had played a handful of ODIs before that tour but hadn’t played Tests and weren’t considered established members of the team. Their performances on the tour changed this. Ganguly, who is currently the BCCI chief, would go on to share numerous partnerships with Dravid over the 12 years they played together for India. Another player, who had made his debut for India in the same series, was fast bowler Paras Mhambrey. Unlike the other two, however, Mhambrey’s international career did not take off. He did find success later as a coach, and has been working as the bowling coach of the India ‘A’ and India under-19 teams since 2015. Mhambrey will reportedly join the Indian team’s support staff in the same capacity.

‘Lucky to learn cricket from him’: Wards on Dravid sirHis coaching skills have already produced both results and several players. Many of the players, who played under him for India-A and India under-19, talk about what they learnt from Dravid sir:

Kirk Herbstreit Has Message For LSU After Hiring Brian Kelly

Another Oklahoma Player Has Reportedly Entered The Transfer Portal

Ardie Savea has become the second All Black following Patrick Tuipulotu to sign on with New Zealand Rugby until 2025. © (Photo by Hagen Hopkins/Getty Images) Ardie Savea all but ... Read more »

A Caledonia woman is facing an assault charge after an “incident” at a school basketball game on Nov. 8. The OPP laid the assault charge on Nov. 23 but did ... Read more »

A busy offseason for the Marlins continued Tuesday, as Miami has reportedly agreed to a trade acquiring infielder Joey Wendle from the Rays in exchange for outfield prospect Kameron Misner. © Raj ... Read more »

The Big 12 doesn’t have to wait until Oklahoma and Texas are gone to experience something that hasn’t happened for a long time — a championship game without either of ... Read more »

Los Angeles Lakers star LeBron James has entered the NBA’s COVID-19 health and safety protocols and will miss Tuesday’s game against the Sacramento Kings, the team announced. It will be ... Read more »

© Provided by The Spun Urban Meyer on the sidelines for the Jaguars. Jaguars coach Urban Meyer once again shot down rumors about the Notre Dame job on Tuesday. On ... Read more »

© Provided by Patriots Wire The New England Patriots have signed running back Devine Ozigbo and defensive back Thakarius Keyes, the team announced Tuesday. The 25-year-old running back was born ... Read more »

Another 5-Star Recruit He Decommitted From Oklahoma

© Provided by The Spun A close up of an Oklahoma Sooners football helmet. Oklahoma has been losing players left and right since Lincoln Riley left to go coach at ... Read more »

© Provided by Vikings Wire With veteran corners on one-year deals, the Vikings could do something they’ve grown accustomed to in the Mike Zimmer era: they could take a cornerback ... Read more »

© Provided by Auburn Wire One of Auburn’s best players from last season will be moving on and entering the NFL draft. Zakoby McClain was a tackling machine for the ... Read more »

© Provided by The Spun Jake Fromm on the field for the Bills. The New York Giants have added a veteran backup quarterback to their roster. Per Tom Pelissero of ... Read more »

Tom Brady Has Message For Fans After Win Over Colts

© Provided by The Spun Tom Brady in the warmups before the Falcons game. Tom Brady led his Tampa Bay Buccaneers to their eighth win of the season with a ... Read more »

What makes Russell Wilson injury recovery even more of a challenge

© Provided by Fansided Seattle Seahawks quarterback Russell Wilson has physically healed from injury, but mentally healing from his first career absence could be the challenge. Russell Wilson is 0-3 ... Read more »

© Provided by Fansided USC football recruiting could not have gotten a bigger boost with the hiring of Lincoln Riley. He’s already landed a five-star QB. Malachi Nelson committed to ... Read more »

© Provided by Badgers Wire After an incredible 2021 campaign, Wisconsin linebacker Leo Chenal was named the Butkus-Fitzgerald Big Ten Linebacker of the Year on Tuesday. The junior star paired ... Read more »

Jaguars vs. Rams: 4 things to know about Week 13's game

© Nathan Ray Seebeck-USA TODAY Sports USA TODAY When the Jacksonville Jaguars take the field Sunday, it will be in a month that is the most important in terms of ... Read more »

© Provided by Patriots Wire As the season has progressed, opponents are beginning to figure out ways to pressure the New England Patriots offense. In the last two games, the ... Read more »

© Provided by Packers Wire An impressive win over the Los Angeles Rams entering the bye week allowed the Green Bay Packers to take back the top spot in the ... Read more »

© Provided by Packers Wire The bye week is coming at a fortunate time for the Green Bay Packers. Linebacker De’Vondre Campbell tested positive for COVID-19 and was placed on ... Read more »

© Provided by The Times of India NEW DELHI: The Prudent Electoral Trust donated Rs 209 crore, or nearly 85% of its total contributions worth Rs 245.7 crore made to ... Read more »

© Provided by The Indian Express The state government on Tuesday suspended secretary of Examination Regulatory Authority, Sanjay Upadhyaya, in connection with the leak of the question paper of teachers’ ... Read more »

© Provided by The Indian Express TIGHTENING ITS genome sequencing measures to ensure early detection of new variants, including Omicron, the Union Health Ministry has asked states to send “100 ... Read more »

Steiner: Mick and Mazepin have ‘matured a lot' in 2021

Daniel Jones is dealing with a strained neck that could put his availability for Sunday’s game against the Dolphins in jeopardy, a source told The Post. The Giants signed quarterback ... Read more »

I can’t bring myself to give up on Kyle Pitts for Fantasy, because we’ve seen how much potential he has, but it’s getting harder to defend him every week. He ... Read more »

© Provided by Fansided A new exposé proves that MLB deployed two different kinds of baseballs in 2021 without informing players of the changes that impacted their careers Major League ... Read more »

© Provided by Pinkvilla November 30th episode began with Amitabh Bachchan resuming the quiz with roll-over contestant Govind Pratap Singh. Govind could only win Rs 10,000 as he failed to ... Read more »

© Provided by Pinkvilla   Megan Thee Stallion‘s Houston fans will have to wait a bit longer to see the rapper perform in the city. The 26-year-old rapper said on ... Read more »

© Provided by The Indian Express The Uttar Pradesh government on Tuesday issued instructions for the genome sequencing of the SARS-CoV-2 virus that causes Covid-19 at a time a new ... Read more »

Goa Forward Party to back Congress

© Provided by The Indian Express AFTER MONTHS of speculation, the Congress has joined forces with the Goa Forward Party (GFP) ahead of the Assembly elections slated for February next ... Read more »

Tiger Woods says his legacy and allegiance are with PGA Tour

© Provided by The Indian Express Ahead of the Assembly elections in Uttar Pradesh, the ruling BJP on Tuesday decided to take out six yatras in the state to reach ... Read more »

Kolkata: In-person lessons for Classes 1-8 may restart from January

College Football Playoff rankings: Who are the top four teams in fifth CFP poll of 2021?

Michigan moves to No. 2 in College Football Playoff rankings; Georgia, Alabama, Cincinnati round out top four

Pirelli: Jeddah ‘the biggest unknown we face all year'