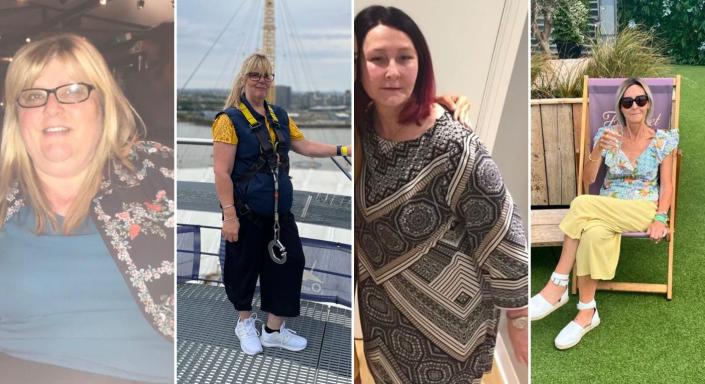 Gaynor Hayes and Gill Beckford have seen a 14st weight loss between them. (Collect/PA Real Life)

Two friends who bonded over their weight loss struggles at work have shed over 14st (89kg) between them by swapping takeaways and chocolate for zip-wires, rollercoasters and mountain climbing.

Unable to walk upstairs without getting out of breath and weighing 19st 6lbs (123kg) at her heaviest, senior analyst Gaynor Hayes, 53, from Watford lost an incredible five stone just before the pandemic hit in March 2020.

But, having turned back to the crisps and biscuits in lockdown, it was the support of her colleague, 62-year-old team leader Gill Beckford from Enfield, who had just dropped from 13st 12lbs (88kg) to 10st 13lbs (69kg), that helped them both stay on track.

Sharing recipes and enjoying 20-mile country walks, the friends then tried new adrenaline-pumping activities to help them continue on their weight loss journey – with Beckford reaching her 8st (51kg) target goal in March this year and Hayes dropping to 11st 7lbs (73kg) in May.

Hayes says she was ‘miserable’ when she was bigger. (Collect/PA Real Life)

“I was on heart tablets, blood pressure tablets and sat in the corner of the room trying to hide.

“I had been a yo-yo dieter for most of my life and would always put the weight back on,” she continues.

“But I was turning 50 in 2019 and I was getting out of breath walking up the stairs and I wanted to do something about it.” 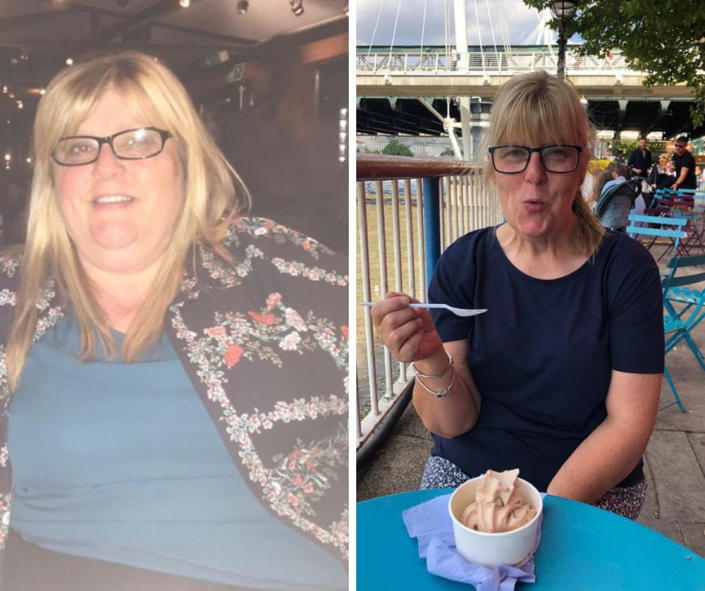 Hayes before and after losing weight (Collect/PA Real Life)

But when lockdown hit, Hayes fell back on old habits.

“As we went into lockdown, it all went downhill because I couldn’t get weighed,” she explains.

But a friendly message from Beckford one day at work helped Gaynor get back on track.

“Gill messaged me one day asking how I was and how the weight loss was going and I said I was really struggling,” she explains. 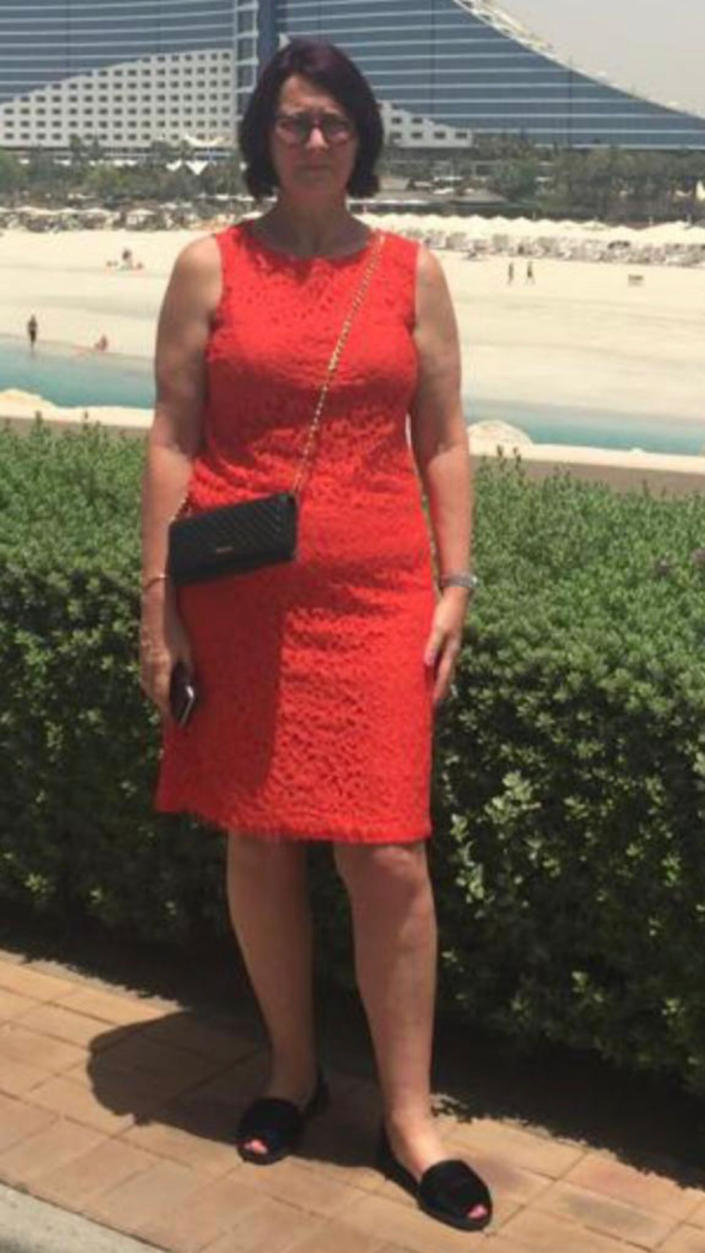 Also describing herself as a yo-yo dieter, Beckford’s main weakness then had been takeaways, enjoying them up four times a week with her husband.

But having also joined WW in January 2020 to lose weight for her 60th that March, Beckford managed to hit 12st 6lbs (79kg) and drop from a dress size 18 to 16 within those first few months.

Speaking about teaming up with her friend Hayes says: “It made such a difference to have someone to talk to about it all and say when you were having a wobble and get that support.

“We started sharing recipes and pictures of the things we would make to compare.”

Beckford adds: “If we ever saw something that looked good at the supermarket we would always buy two so we could both try it.” 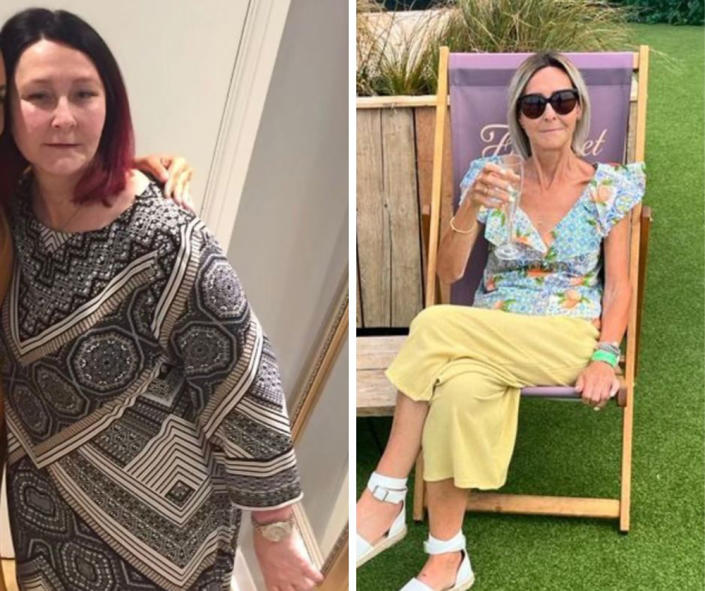 Beckford before and after losing weight. (Collect/PA Real Life)

At first, the friends started walking together to lose weight, but they soon started to branch out into other activities.

“It started off with a sponsored 20K walk for work for the NSPCC in September 2021, which we trained for together and then we started to look for more things to do,” Hayes explains.

As well as further sponsored charity walks, the pair took on the Race for Life, the Tottenham Dare Skywalk, the O2 Climb and in June this year they climbed Mount Snowden.

“It was really fun because we booked loads of different activities while we were there,” Hayes says.

“We did a zip wire, a big swing and a forest rollercoaster.”

“We love the adrenaline kicks doing scary things gives us – the more challenging the better.” 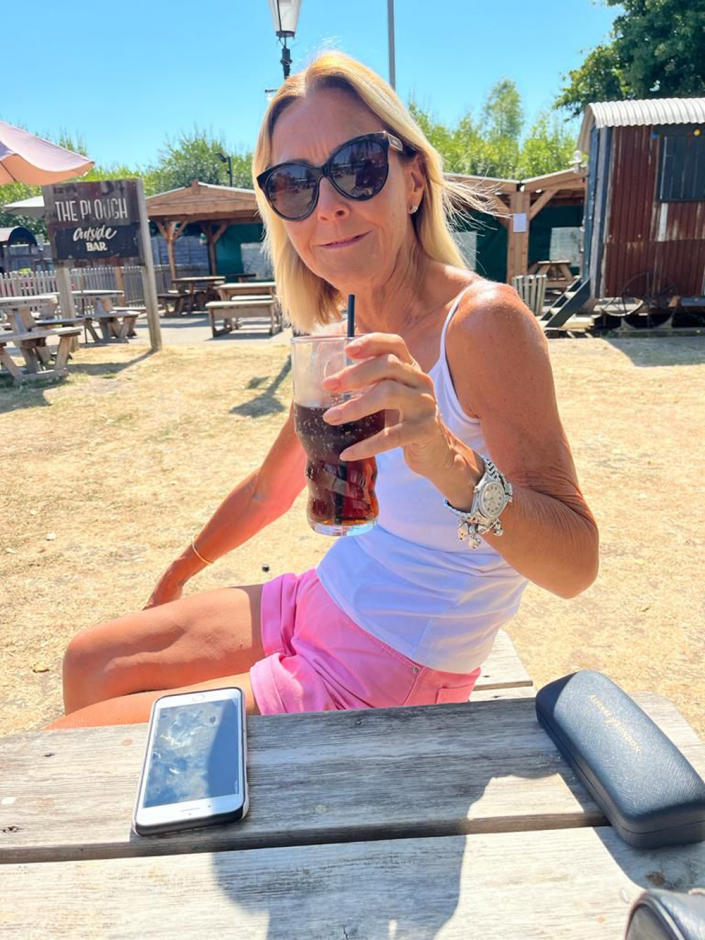 Beckford has dropped to a size six. (Collect/PA Real Life)

Also in line with their new youthful take on life, the pair recently had their noses pierced together.

By May this year, Hayes could not believe she had dropped to 11st (70kg) and was wearing a dress size 14.

“When I first started, I just thought, ‘Let’s chip away at it until I get to 13st’, and then I got to 12st and then to get to 11st in the summer was a huge milestone,” she explains.

“It has been life-changing. I'm the happiest I have ever been and I am determined to keep going and lose those extra few pounds to get to my goal weight of 10st 6lb (66kg).” 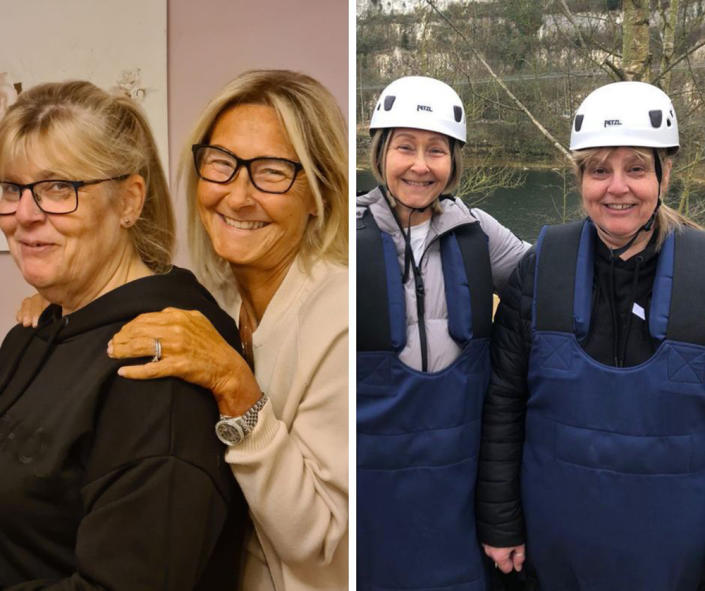 Hayes credits her friend for helping her achieve her weight loss goals.

“It feels like we have gone back into our late teens and are reliving what we couldn’t do then because we were overweight.”

Beckford, now a size six, said she also feels better than ever.

“I don’t think I would have ever tried doing these activities if it wasn’t for Gaynor,” she adds

“I have changed in so many ways since we started doing this. I look completely different and I have gained so much confidence.

“I went away last week to Cape Verde with my husband and I wore all new colourful bikinis.

“I kept stopping to check myself and ask my husband if I looked OK and he said, ‘Yes, you look amazing.’

“I know that I am never going back to where I came from. This is the new me now.”

Breakfast – Crumpets with butter, jam and a can of Coke

Lunch – Deli baguette, crisps, chocolate bar and can of Coke

Dinner – Whole pizza, chocolate, crisps and a can of Coke

Breakfast – Four slices of toast with lots of butter and jam

Lunch – Cheese and mayonnaise baguette with crisps and bar of chocolate

Dinner – Chinese or Indian takeaway, fish and chips or a ready meal

Lunch – Cheese or chicken low-carb roll with a big salad

What to know about the Sparks’ 2023 schedule

Kelowna’s Salvation Army has announced a new Lakeshore Road location. Starting December 1st, kettles can be found in front of Urban Fare, not far away from the nearby liquor store. ... Read more »

What is COVID's Incubation Period and When is the Best Time to Test?

As many Americans may have been exposed to COVID-19 over the holiday week, many are wondering how long it may take to feel symptoms and when to test Read more »

Mega Agency UPDATE: The driver who fatally ran over Gone Girl actress Lisa Banes with his electric scooter has been sentenced to one to three years in prison on Wednesday. ... Read more »

As the ex-CEO spoke with journalist Andrew Ross Sorkin about the fall of FTX, Crypto Twitter did not like what it was hearing. Read more »

Aaron Rodgers to consider idea of QB switch if Packers are eliminated with 'open mind' GREEN BAY, Wis. —  Aaron Rodgers is playing Sunday against the Chicago Bears despite his ... Read more »

What conservatives need to win the culture wars: creative visionaries

Without a well-developed conservatism to expose problems, liberalism would have to find its critics in literature. Getty Images/Drew Angerer A famous passage in the preface to Lionel Trilling’s book “The ... Read more »

An Okanagan team will be gunning for glory this weekend at the B.C. high school provincial championships. Vernon Secondary School will be facing Windsor Secondary of North Vancouver in the ... Read more »

‘This is a crisis’: City council approves $7.5M for emergency winter shelter space in west Edmonton

Edmonton councillors have unanimously approved a one-time $7.5-million increase in funding for additional winter homeless shelter space in the west end — even though it isn’t the city’s job to ... Read more »

Here are USMNT’s odds of winning World Cup entering knockout stage originally appeared on NBC Sports Chicago The U.S. men’s national team was one of 32 squads in the 2022 ... Read more »

He was discussing his defense’s struggles against the run Wednesday when Brandon Staley noted that football is “such a great team game.” The Chargers’ head coach was making the point ... Read more »

These unique baby names will be the most popular in 2023

Nameberry dropped a list of 23 unique baby names we could see more of in the new year. Getty Images/iStockphoto That’s Wilde! The team from the parenting website Nameberry released a list ... Read more »

Wink Martindale, the Giants’ defensive coordinator, was asked how much he has missed Azeez Ojulari. The second-year outside linebacker is set to return Sunday against the Commanders after he missed ... Read more »

Breaking down what it could take for Jets to make playoffs

Robert Saleh has a good reason why he is not letting himself get wrapped up in hypothetical playoff scenarios and going over the Jets’ remaining schedule trying to count up ... Read more »

Patrick Peterson: Kyler Murray ‘don’t care about nobody’ but himself

Kyler Murray only cares about Kyler Murray. That’s according to Patrick Peterson, who played with Murray on the Cardinals for two seasons. Peterson co-hosts the “All Things Covered” podcast with ... Read more »

THE UK's most festive street has once again transformed into a winter wonderland – except for one Grinch who seems to lack their Christmas spirit. While residents on Byron Road ... Read more »

Yasiel Puig has changed his mind and is pleading not guilty to lying to federal authorities in their investigation of an illegal gambling ring. The former MLB star said on ... Read more »

Terrell Owens is claiming self-defense. Over the weekend, video emerged of Owens punching and knocking down a heckler outside of a CVS in California. Police were called to the scene. ... Read more »

Roy Rochlin/Getty Images for Tribeca Festival In what would be his first series regular television role, two-time Oscar winner Robert De Niro is set to star in and executive produce ... Read more »

Cramer's Lightning Round: Crestwood Equity Is a Dynamite Stock

SAN JUAN, Puerto Rico —  The U.S. Virgin Islands announced Wednesday that it reached a settlement of more than $105 million in a sex trafficking case against the estate of financier ... Read more »

The Rams presumably fell out of the running to re-sign free-agent wide receiver Odell Beckham Jr. by failing to contend for the playoffs. As perhaps an admission that that their ... Read more »

Paramount Pictures In what is likely a shock to many millennials, “Mean Girls” is fast approaching its 20th birthday in the spring of 2024. In what can best be described ... Read more »

COMFORT food with minimal prep is perfect for winter. Try these cheap and easy microwave mug recipes for a tasty and simple treat. Warm yourself up this winter with some ... Read more »

MARTIN Lewis' MoneySavingExpert has revealed where Christmas shoppers can bag 1litre of Baileys for £10. Tesco shoppers will be able to get the huge bottles for a just a tenner ... Read more »

WE could all be toasting more than just Christmas this festive season if England go deep in the World Cup – so best get the bubbles in now. And there ... Read more »

FOR a quick and easy lunch as the weather turns cold, a soup maker will deliver with minimal effort. It may not be a kitchen “essential”, but these machines can ... Read more »

He says it is now a source of some amusement in the locker room. Teammates can come up to Dexter Lawrence and make a wisecrack about it. “I’m chill,’’ Lawrence ... Read more »

Alberta couple square off against payment system Square after losing out on $3,300 in sales

Winter weather ‘roller coaster’ on the way for New Yorkers

Bob Marley immersive experience to land in U.S. next year