Frontex, the European Border and Coast Guard Agency, will be monitoring human trafficking on the English Channel from Wednesday. One of its planes will regularly fly over the coasts of France, Belgium and the Netherlands to detect smugglers’ networks.

Former MEP Ben Habib has previously highlighted Frontex, which requires staff to wear EU-branded uniforms, has all the hallmarks of “an EU Army”.

It follows the death of 27 people – 17 men, seven women and three children – who drowned while attempting to cross from France to the UK via the Channel last week.

In a crisis meeting on Sunday, France, Germany, the Netherlands and Belgium agreed to work together to combat the growing threat from migrant smuggling gangs in Calais, northern France, which has hosted thousands of asylum seekers for decades.

European Commissioner for Home Affairs Ylva Johansson said: “We must prevent the loss of life and prevent chaos from reaching our external borders.” 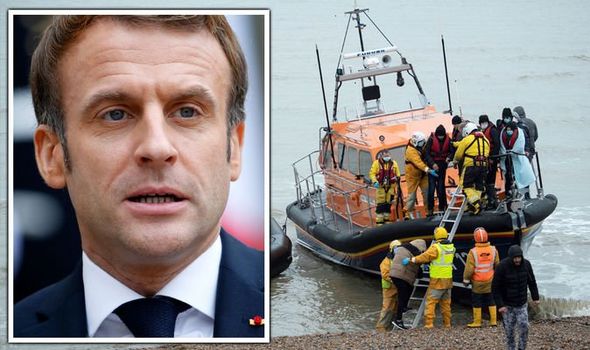 She wrote in a blog post: “Migrant smuggling must be tackled by the EU together.

“It is not an issue for only some countries.

“Breaking down organised criminal smuggler networks can only be done in cooperation.

“Of course we have to discuss solutions with the UK too.”

But UK Home Secretary Priti Patel was not there for such discussions as her invite for the meeting with the EU’s interior ministers was retracted in response to an unfortunate move by Prime Minister Boris Johnson. 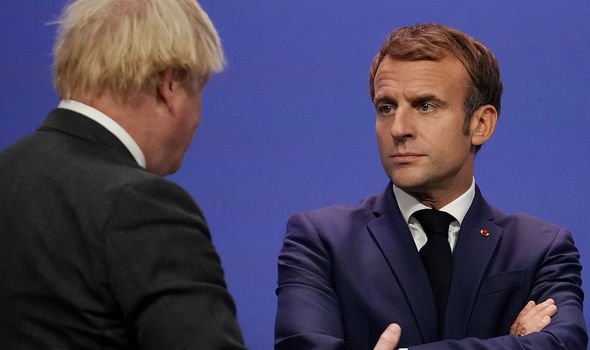 He wrote a letter to French President Emmanuel Macron in which, as part of a five-step request, he asked for an agreement allowing “all illegal migrants to cross the Channel to be returned”.

What infuriated the French – as well as politicians at home – is that Mr Johnson tweeted the letter to Mr Macron before it had been officially sent.

The episode fuelled tensions between London and Paris and proved counterproductive to the two sides’ pledge to collaborate in preventing people from risking their lives in making the perilous Channel crossing.

French interior minister Gérald Darmanin said of the meeting, which was also attended by the police agency Europol: “This meeting was not anti-English. It was pro-European.

“European countries want to work with our British friends and allies.” 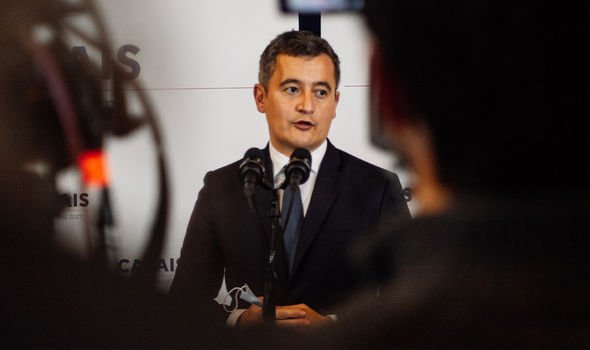 Mr Darmanin confirmed a European aircraft would be sent to “fly over the area day and night” from Wednesday, December 1, and Frontex stressed possible reinforcements could be deployed to the ground if needed.

Fabrice Leggeri, the agency’s executive director, told BFMTV: “We are starting with a plane, but we can obviously go further.

“The states have mentioned the possible sending of people on the ground, that is one of the possible options.

“We can increase our support.”

Mr Leggeri said Frontex’s mission was also to “fight crime”, which could be done by “collecting personal data at the borders” that could then be provided to Member States.

The sharing of data aligns with the EU’s intention to further collaborate between nations. 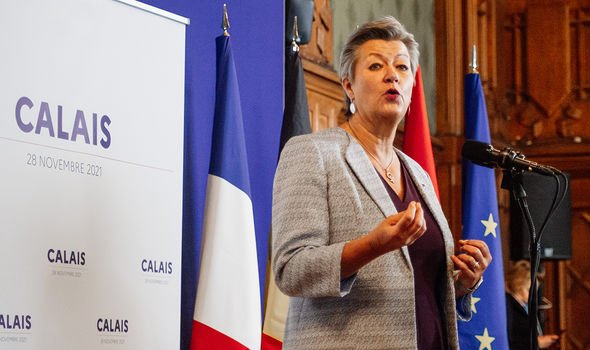 “A week from now I will present an updated Police Cooperation Code to strengthen the mandate of police forces to work together.”

She said of the agency’s new role: “During the meeting in Calais it was confirmed that Frontex will provide a surveillance aircraft above the English Channel from this week on.

“Frontex can do more to support with surveillance, cameras, vessels, aircrafts, information sharing and staff.

“This would help in border surveillance and checks and also in search and rescue.”

When asked about potential actions with the UK, Frontex’s Mr Leggeri said no operations were possible with states that are not part of the EU or Schengen area without specific agreements.

Mr Darmanin told a press conference on Monday that, considering they could “not change our geography”, they were ready to resume “serious discussions” with the UK despite last week’s poor communication from Mr Johnson, which the interior minister dubbed “a mockery”.

He added: “We need to come to an understanding with our British friends and allies even though they have chosen to leave Europe.”

US suspends flights by China carriers after Beijing COVID move

© Provided by Dot Esports There were some doubters surrounding 100 Thieves and their hold on the LCS following the team’s unceremonious loss against FlyQuest during the first week of ... Read more »

Geneva, the neutral turf that was once host to so much Cold War bargaining, is again welcoming Russian and US officials to discuss missiles, nuclear arms and spheres of influence ... Read more »

© Provided by The Indian Express THE UT Administration has decided to hire a consultancy firm to explore the possibility of a shorter route to the Chandigarh International Airport, which ... Read more »

How to get the Kuriboh card in Yu-Gi-Oh! Master Duel

© Provided by GamePur Kuriboh is one of the cutest monsters you can find in the Yu-Gi-Oh! franchise. Thankfully, it’s present in Yu-Gi-Oh Master Duel. The card isn’t particularly powerful, ... Read more »

One New York Police Department officer has died and another is injured after a shooting incident in Harlem, a law enforcement official tells CNN. © Google Maps The incident happened ... Read more »

An Alberta mother is raising concerns after her son broke his leg and had to be taken to hospital in a fire truck because no ambulances were available. © Global ... Read more »

What the papers say – January 22

© Peter Byrne What the papers say – January 22 (PA) Boris Johnson, Meat Loaf and Covid-19 are among the topics splashed across the nation’s papers. The Times says Boris ... Read more »

Say it ain’t so, Joe. Say you will not be a Division III wide receiver from Elkhart, Ind., who hides from the big-city spotlight and cowers under his desk when ... Read more »

With the pace of capital expenditure slowing down in the third quarter of the current financial year, the finance ministry has relaxed spending norms to allow government departments to spend ... Read more »

5G won't be threat to aircraft in India: Trai

© Provided by The Times of India NEW DELHI: Aircraft flying over India will not face any safety issues because of the upcoming 5G mobile services, telecom regulator Trai has ... Read more »

© Provided by The Times of India NEW DELHI: Including electric vehicles in the Reserve Bank of India’s (RBI’s) priority sector lending (PSL) guidelines can complement the $300-million facility and ... Read more »

© Provided by The Times of India NEW DELHI: In a letter to Amazon, the Kishore Biyani-promoted Future Retail (FRL) has asked the US ecommerce giant for Rs 3,500 crore ... Read more »

Unicorns mop up 61% of start-up funding in CY21

© Provided by The Financial Express In CY21, Indian start-ups raised around two times more in investments against the previous year, out of which 61% were raised by 42 unicorns ... Read more »

© Provided by The Indian Express MUMBAI CUSTOMS department on Friday intercepted and seized 1.8 kilogram of gold and 60,000 USD from three persons — two Mumbai residents and a ... Read more »

© The Independent Singapore Singapore — During hard times such as these, it is always welcome news to hear of communities stepping up to help. President Halimah Yacob recently commended ... Read more »

Is Rod Stewart's new £200,000 Ferrari too small for Penny Lancaster?

As a dedicated sports car lover, Rod Stewart probably gave no thought to turning up to his son’s football match in a shiny – but tiny – new motor. But ... Read more »

Liverpool have a young academy prospect in their ranks who boasts an incredible goalscoring record. Mateusz Musialowski has even been dubbed the “Polish Lionel Messi ” following his rise through ... Read more »

Sidney Poitier’s Memorial Will Be Private Due to Pandemic, Family Says

The family of Sidney Poitier on Friday offered a statement sharing details of the late actor and director’s planned memorial service. “The Poitier family so appreciates the wonderful outpouring of ... Read more »

© Emma McIntyre/Getty Images Flowers were placed outside the store where Brianna Kupfer was killed. The man suspected of killing Brianna Kupfer while she was alone at work last week ... Read more »

© Provided by The Times of India NEW DELHI: India on Friday called for patent waiver for vaccines, drugs and devices at the World Trade Organization (WTO) and warned that ... Read more »

© Provided by The Guardian Photograph: Julian Eales/Alamy The average age for joining the property ladder in Britain has risen to above 30 in every region of the country, as ... Read more »

Um, Are You Seeing This? Revlon’s Famous Hair Dryer Brush Is Just $35 Today

There are some beauty products that garner a cult following for a reason: they 100% live up to the hype. The Dyson Supersonic Hair Dryer is one of them, and ... Read more »

Graphics by Jannielyn Ann Bigtas A suspected member of the New People’s Army (NPA) was killed during a clash with government troops in Bicol on Friday, the military said. According ... Read more »

Paxton is the latest high-level state official to test positive for the coronavirus. Read more »

Camrin Williams is accused of shooting an NYPD officer in the leg during a scuffle in the Bronx. William C. Lopez The reputed teen gang member and budding rap star ... Read more »

A mother who recently gave birth has claimed Queensland health bosses banned her from seeing her newborn son until she returned a negative Covid test.  Caboolture Hospital, in Brisbane’s north, ... Read more »

'A good idea to use him at No. 6. He can throw his bat at will': Gavaskar identifies next 'finisher' for India in ODIs

I want Boris Johnson to be PM for as long as possible, says Liz Truss

Digital cash gets a look from the Fed