MORE than just a fashion statement, the cheongsam has become a garment of choice for the younger generation who want to feel more connected to their roots.

One topic that has been dominating conversation threads in university student Danielle Chan’s messaging apps is the latest cheongsam styles and colours.

“For Chinese New Year family pictures, we like to dress according to a theme. So, a few weeks before the big day, we’d be exchanging pics of the latest cheongsam fashions,” said Chan, 22. 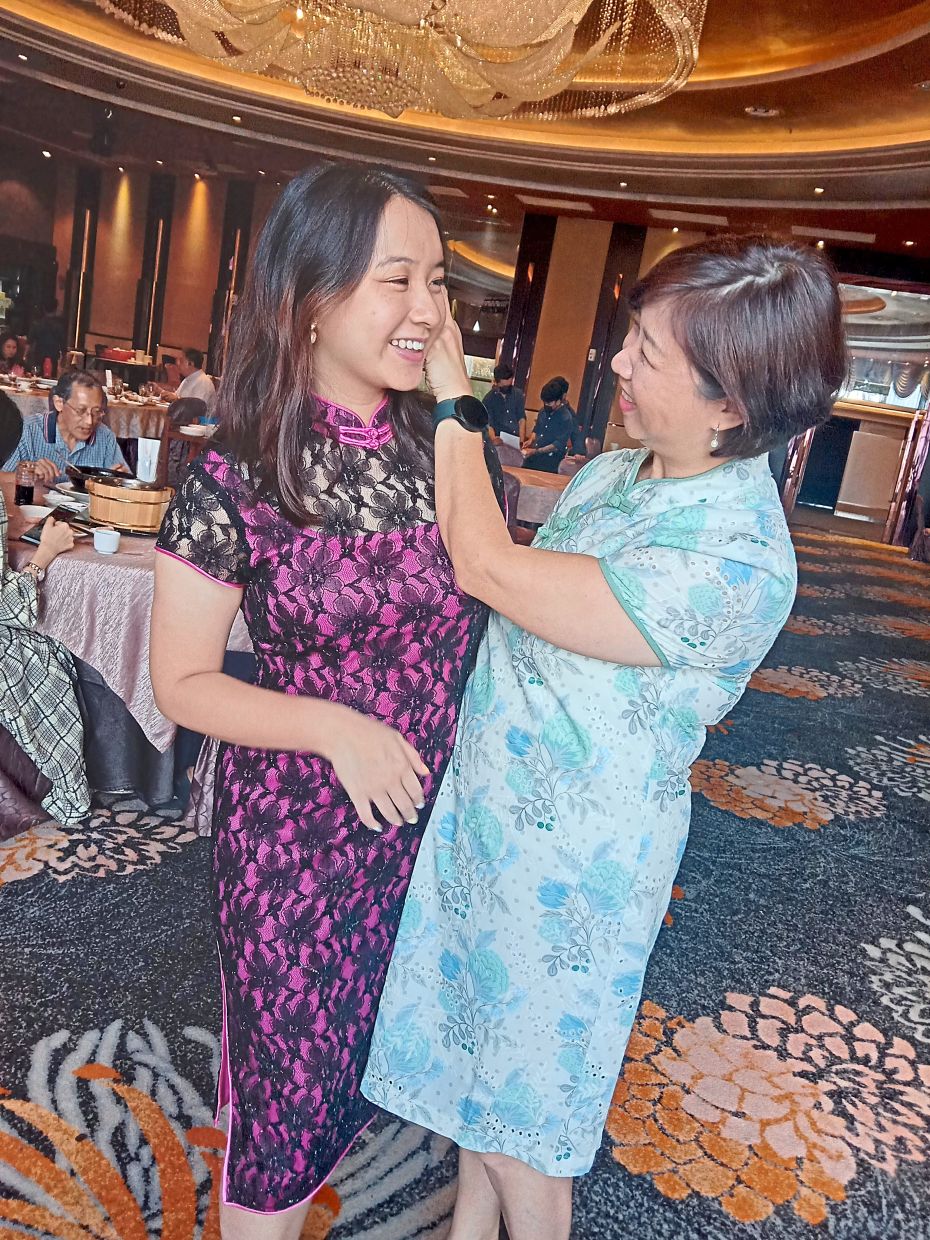 Lim (right) with Chan, who is wearing her favourite cheongsam which belonged to her paternal grandmother.

“One year, when the trending colour was purple, everyone showed up in outfits of that colour,” she added.

She said mass production meant she could easily buy a cheongsam off the rack or from an online shop, unlike in the past when one had to get a bespoke outfit from the tailor.

Chan said she developed her cheongsam awareness when her school started incorporating the wearing of traditional clothes to celebrate festive occasions.

“That was when I sought to find out what kind of cheongsam styles fit me best,” she explained.

She has five such outfits. Her most treasured piece is one of pink silk with black lace, a gift from her paternal grandmother, which she wears only on special occasions.

She said she wore it to a company dinner last year and to a family gathering on New Year’s Day.

“This is the oldest piece in my collection. It is at least 22 years old and was made by a tailor in Petaling Jaya,” said Chan.

Another favourite piece is a black velvet number embroidered with small blue flowers at the chest, which she shares with her mother, Patricia Lim, 51.

This piece is also reserved for important functions and dinners but since it is black, it is not donned on for traditional Chinese celebrations.

“Wearing a cheongsam makes me feel proud of my heritage as a Malaysian-Chinese.

“I am now interning at an international school where there are a lot of expatriates.

“When I wore a cheongsam to a school event, it prompted a lot of questions and I had the chance to talk about our multiracial culture,” said Chan.

For life skills development manager Delicia Ng, 37, the cheongsam has been part of her most important life events.

Ng said she had three made for her wedding 13 years ago; one for the tea ceremony and another two for the dinner event. 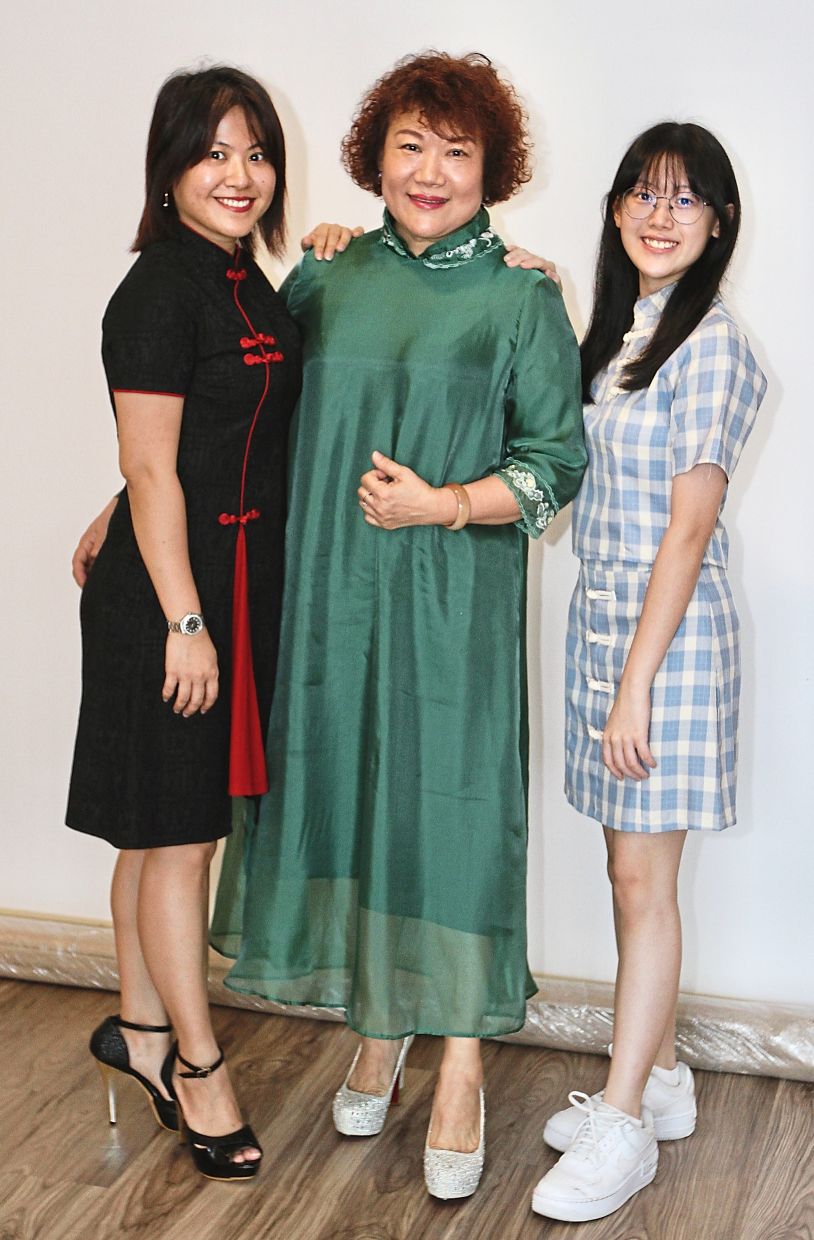 Elaine (left) and Shevonne with their mother Joy, showing how there is a cheongsam to fit every shape. – Photos: LOW BOON TAT/THE STAR

“I started wearing the cheongsam at a very early age. There are many photographs in my parents’ house of me dressed in a cheongsam,” said Ng.

Ng said she would get usually her sons Daniel, nine, Nathan, six, and husband Edward, 39, to wear tops that match the outfits that she and her daughter, Elizabeth, 10, wear.

“My sons are too young to protest but my daughter, who is developing her own fashion sense, needs a bit of convincing,” she said.

Having received many compliments on her traditional outfits, Ng said it was important to wear them during the Chinese New Year.

“When I wear the cheongsam and say the traditional Chinese greetings to wish my family and friends, it reminds me of my origins.

“Wearing the cheongsam makes me feel beautiful, especially when matched with the right shoes and make up.”

Friends Shevonne Chia, 15 and Queenie Lum, 20, regularly wear these garments and post images of themselves in them on social media.

Lum, who has three outfits, is known to pair them with sneakers.

They are also event crew members of the International Qipao Association, a cultural and charity organisation. The cheongsam is also known as qipao.

Chia and Lum have worn the cheongsam to emcee and present prize certificates at the organisation’s fundraisers.

“When my mother asked me to join the association, I was hesitant. I used to think the cheongsam was only for older women and the garment would be too mature style for me,” said Lum.

Both joined after hearing their family members talking about the organisation’s activities.

Association president Wynnie Choong said despite the movement restrictions during the past two years, the committee has managed to raise money for various causes through a beauty pageant and singing competition.

So far, members have raised RM8,500 in aid of a welfare centre and old folks home.

It has 70 members, who are mostly women aged 30 and older. Chia and Lum are the youngest members.

The organisation is likened to a sisterhood. 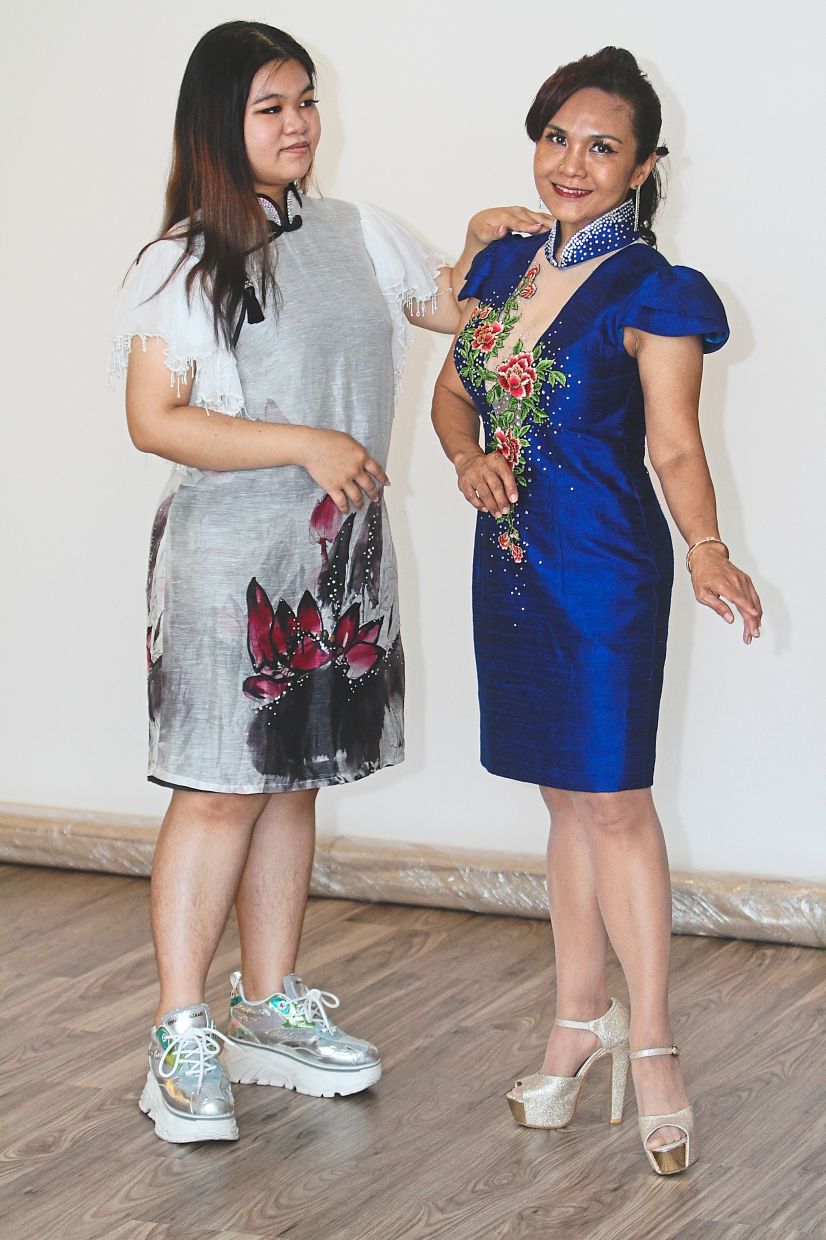 Lum (left) with her mother Jessie, who is treasurer of the International Qipao Association. — Photos: LOW BOON TAT/The Star

Another draw is the opportunity for members to parade their embroidered or diamante-studded outfits on stage like beauty queens.

“The association not only promotes the wearing of cheongsam as a way to preserve Chinese culture but also as a platform for our members to gain self confidence and poise while doing charity.

“In many ways, our association is also a tribute to femininity and female empowerment.

“Many of our members are businesswomen who have made significant contributions. We hope to have more young people in the association,” said Choong.

How to pick a cheongsam

Today, the fabric used for the cheongsam is not limited to dragon and phoenix motifs.

The garment is not only for formal occasions either.

One also does not need to have an hourglass figure, wear high heels or a have salon hairdo to complete a cheongsam.

For Chia and Lum, cheongsam tops can be paired with jeans and dresses can be worn with sneakers.

The cheongsam is now available as separate pieces for easier outfit coordination.

Ng said there was always a style to suit every shape.

She said she even wore the cheongsam while she was pregnant and breastfeeding, adding that she has accumulated five such garments in her wardrobe to accommodate her changing body shape over the years.

“It is important to have the right inner wear to prevent visible bulges. The right material, preferably the type that will hold its shape, would be advantageous,” said Ng.

Her tip when trying a cheongsam is to get a cut that is slightly loose and to sit down while wearing the outfit.

“This way, you can see how high the slit goes and ensure it’s not too tight in the tummy area,” said Ng.

The traditional garment has been updated for today’s styles.

Chan said she found a cheongsam with a frilly hem online.

“For me, comfort comes before style. It is important to be comfortable, otherwise one will feel awkward and not feel confident.”

“My dresses are fitting but a little loose. The slit should be up to mid thigh with a knee-length skirt,” she added.

Social media users up in arms after Umno sacks Khairy

Risky to give up state seat for Tengku Zafrul, PH told

India police charge 10 with homicide over Morbi bridge collapse that killed 135 AHMEDABAD, India: Police in India on Friday charged 10 people with homicide in connection with the collapse ... Read more »

Mahfuz wants PH, BN to do away with 'big brother' attitude in seat talks

Umno to decide on KJ's fate

Umno confirms sacking of Khairy along with Noh, Hishammuddin and Shahril suspended in Zahid's purge

500 gather at Swedish Embassy, protest burning of the Quran

500 gather at Swedish Embassy, protest burning of the Quran KUALA LUMPUR: Some 500 people gathered in front of the Hampshire Place building, which houses the Swedish embassy here, to ... Read more »

It's OK for Zii Jia to lose - for now

It’s OK for Zii Jia to lose – for now KUALA LUMPUR: Malaysian fans will have to get used to Lee Zii Jia losing, at least for now, and be ... Read more »

2023 Africa Eco Race Postponed The rally will return on December 30, 2023. While much of the world has adapted to the COVID-19 pandemic after nearly three years, its impact ... Read more »

The last quarter of 2022 has been a challenging time for smartphone makers. According to IDC’s latest report, total smartphone shipments worldwide have dropped by 18.3% from 367.6 million units ... Read more »

Isham confirms Noh Omar asked to be sacked from the party

NST Leader: Long arm of the German law Myanmar will mark the second anniversary of the military coup on Feb 1. Yet, neither the United Nations nor Asean has found ... Read more »

Pearly-Thinaah only survivors at Indonesia Masters

Pearly-Thinaah only survivors at Indonesia Masters KUALA LUMPUR: Pearly Tan-M. Thinaah kept the Malaysian flag flying, but it was the end of the road for world champions Aaron Chia-Soh Wooi ... Read more »

Dr Wee: Funding for UTAR Hospital in Muar has reached 80%

Sultan of Selangor consents to reconvening state assembly on March 14

Refuting Noh, Khaled says decision to fire and suspend members made by disciplinary board

Malay Mail KUALA LUMPUR, Jan 27 — Umno vice-president Datuk Seri Mohamed Khaled Nordin insisted tonight that the decision to fire and suspend members was made by the disciplinary board, ... Read more »

Wife beating points to husband’s ignorance of basic Islamic teachings Even for people who are ready to defend Islam, the widely held interpretation of Quranic verse 4:34 causes discomfort and ... Read more »

Umno Cleanse: Keep fighting, but in our own way - Annuar Musa

We’ll decide when the time comes, says Rafizi on PKR taking in KJ

Noh Omar suspended for 6 years, wants Umno to sack him

From winning Oscars to embracing Islam, here are some facts about AR Rahman