A SHOP worker packs bridal bouquets into boxes before she carts them off along a dimly lit corridor.

Her shop is one of a few that are still open amid plenty of shuttered stores.

There were not many other signs of activity at the quiet Semua House mall in Jalan Masjid India, Kuala Lumpur, on a weekday afternoon.

This is not the scene one usually expects at a shopping complex. 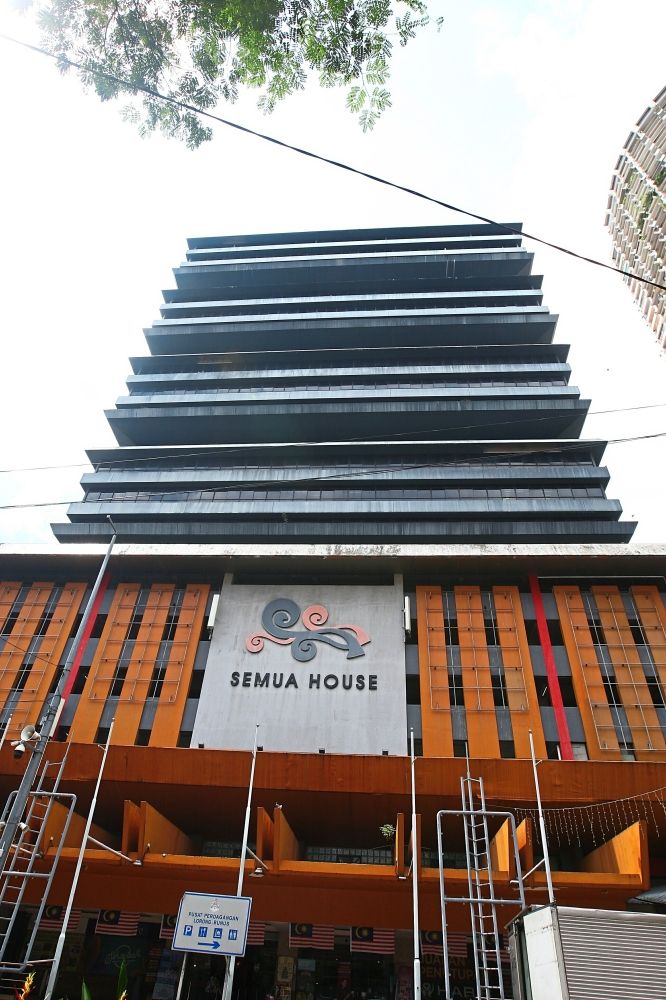 Closing for now: A third facelift is being planned for the 36-year-old retail complex in Jalan Masjid India, Kuala Lumpur. — AZMAN GHANI/The Star

It used to be bustling with shoppers looking for traditional wear, bridal items, jewellery, leather goods and trinkets.

That changed after the Covid-19 lockdowns as the movement restrictions caused foot traffic to dwindle at this 21-storey building housing retail and office spaces.

Consequently, the Semua House complex that also has a food court will close after Sept 30, sparking questions about its future.

Cleaning services worker Norhayati Kamaruddin, 60, heard that the building would be turned into a high-end shopping centre.

“I have seen the purported drawing of the refurbished building and it looked beautiful. 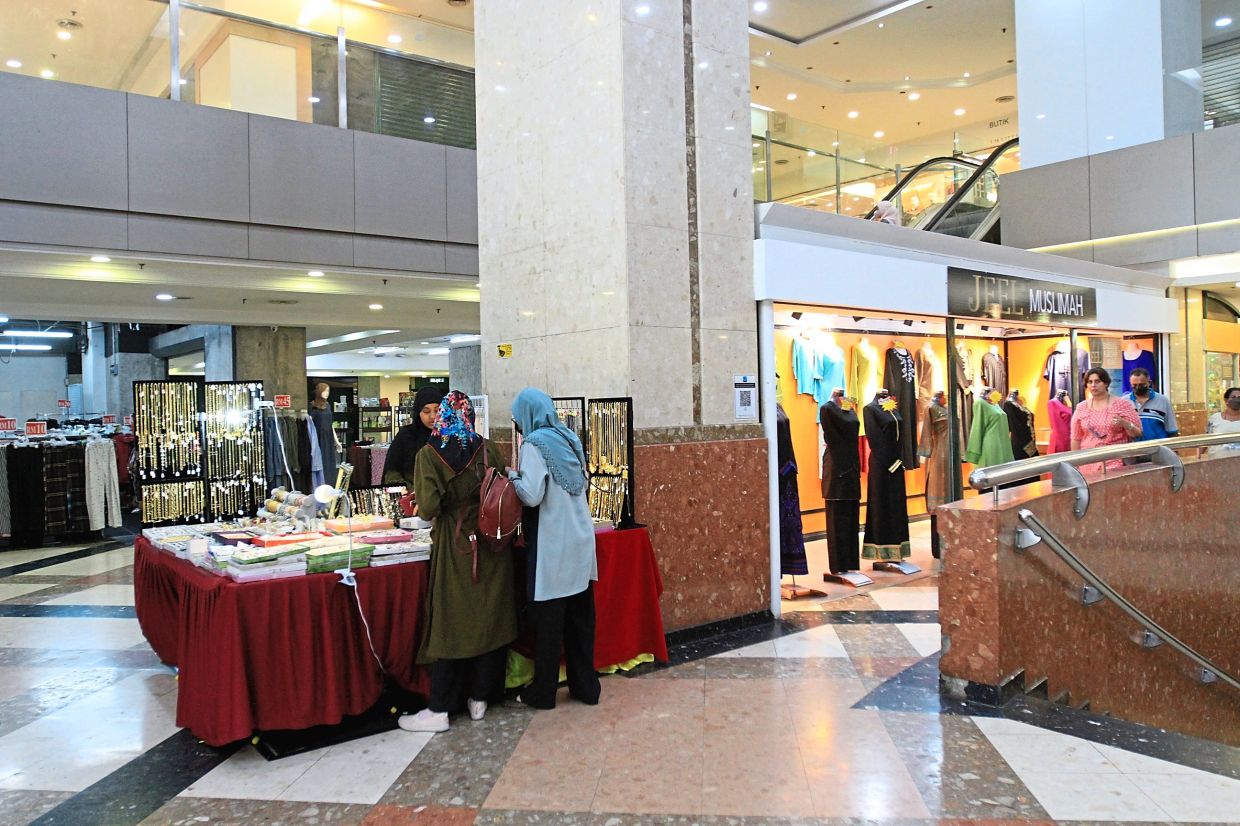 The foot traffic at Semua House has dwindled.

“This was a hotspot, especially during Hari Raya Aidilfitri when people would flock here to buy festive necessities.

“The current surau needs to be upgraded as it cannot accommodate the number of people. The toilets in this complex are also frequently in disrepair,” she said.

Boutique employee Naser Mohamed, 30, said he heard that the upper floors, which currently house offices, were being converted into a hotel.

“We are unsure if the current tenants will be invited back once the renovation is completed,” he added.

Another boutique worker Liyana Jamali, 25, said her shop was in the process of moving to Jalan Tuanku Abdul Rahman. 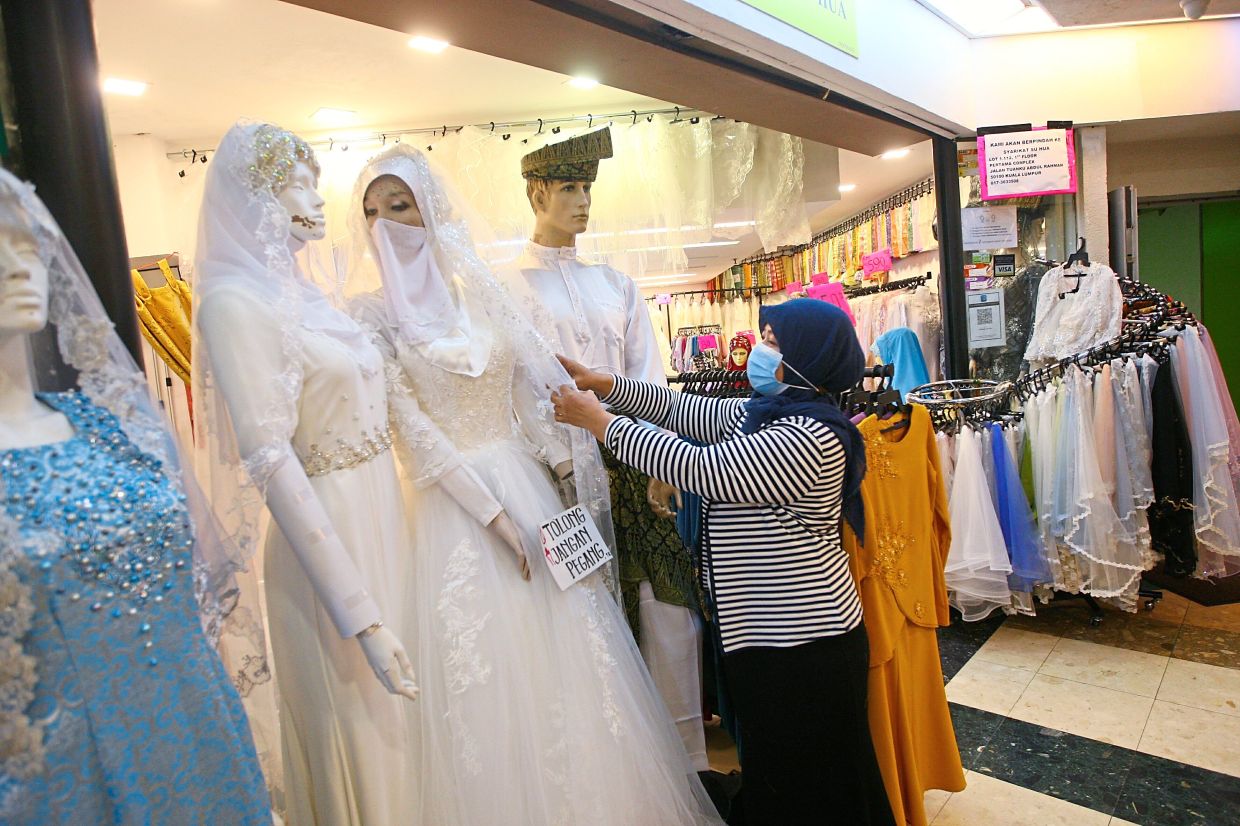 Some shops at the complex having a last-minute sale before closure on Sept 30.

“We were told by the complex management three months ago that we must vacate the premises by Sept 30.

“To clear out the shop faster, we are offering a 30% discount on selected items to boost our sales,” she said.

Liyana noted that the many closed shops at the mall further contributed to the drop in footfall in recent months.

“Some shops which closed during the Covid-19 lockdowns never reopened, as the tenants were unable to pay the monthly rental,” she added.

Akoma Khatimah, 53, who has been working at the food court for nearly two decades, expressed feeling sentimental about the complex.

“This complex used to be a must-visit spot as everyone knew of Semua House and what it offered.

“The food court used to be a crowd-puller too, especially during lunchtime as it had a wide variety of menu options. 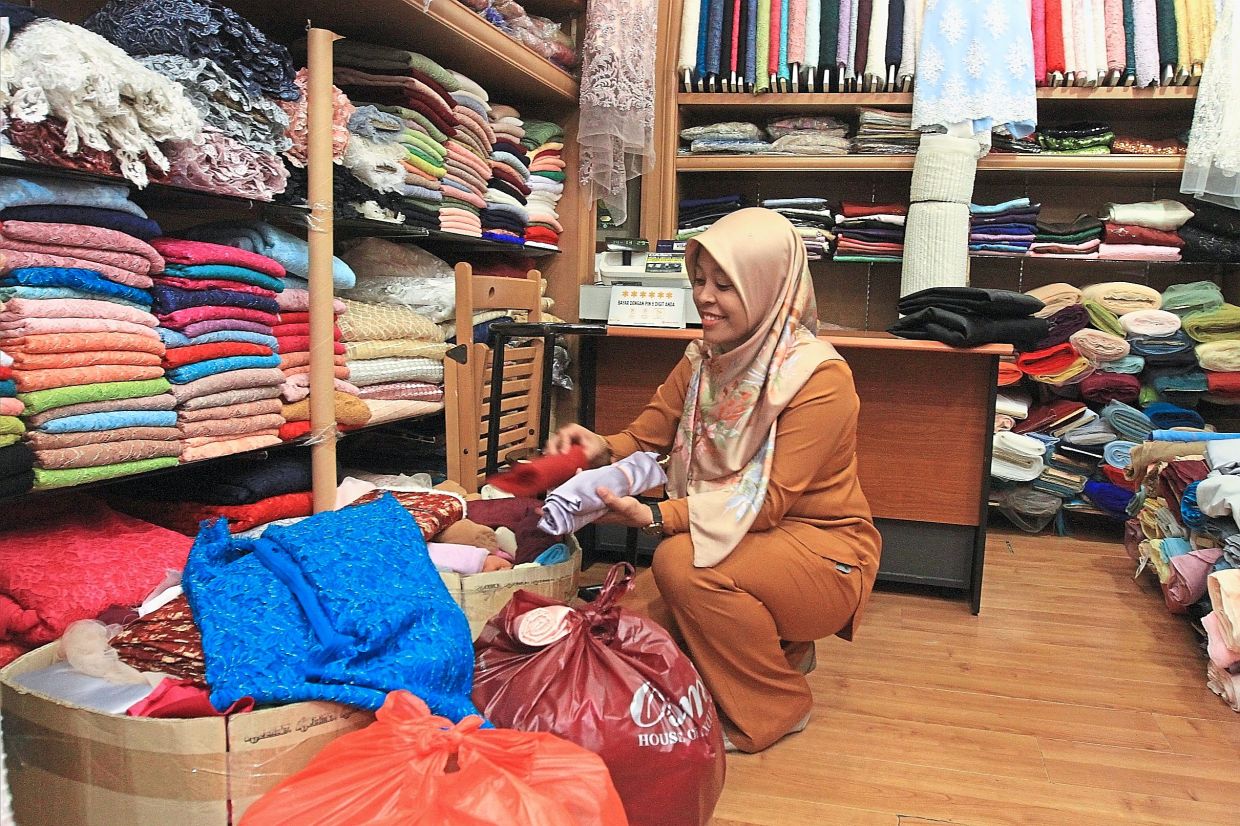 A boutique worker packing up textile ahead of the closure.

“Now, it is quite run-down and poorly lit, which is a turn-off for customers who prefer a livelier place,” she said.

Akoma is also worried about losing her job once the complex ceases operations come October.

“My boss has not confirmed if he is relocating the business, so my job future is uncertain,” she added.

Noraliza Basaruddin, who mans a kiosk in the mall, said despite its washed-out interior decor, Semua House was still preferred among the older generation.

“I met some people recently who were looking for a video store here. 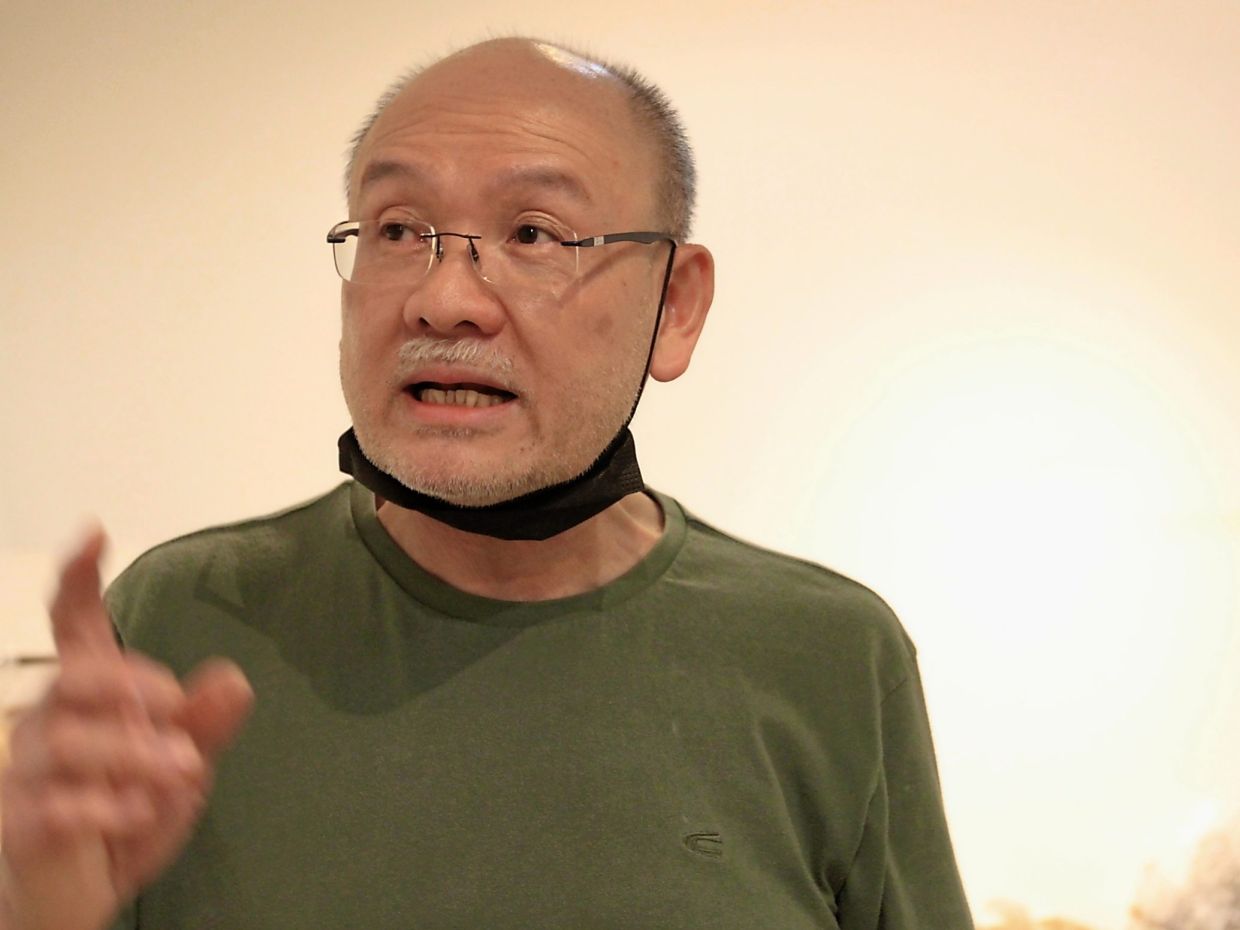 Chong says Semua House should continue to offer only local brand goods to reflect the image of the place.

“I told them that the shop no longer exists.

“My boss has said that he is considering moving back in after the renovation, but this will depend on the rental rate.

“Although the rent will likely be higher then, we see potential to make handsome profits here.

“Since the borders were reopened, more tourists from Singapore and Brunei have been flocking here,” said Noraliza, 43.

“It is time for change and we must be open to progress. 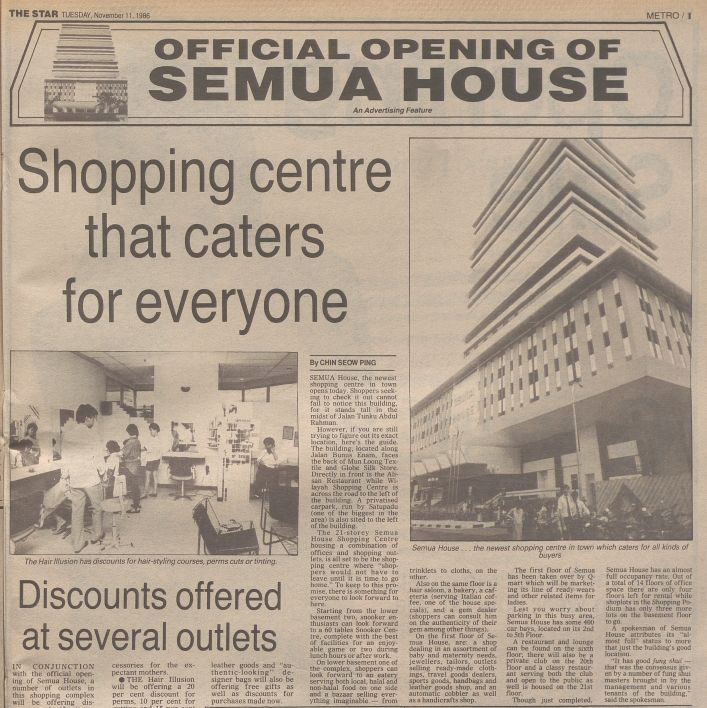 An article in Metro section of The Star on Nov 11, 1986 in conjunction with the official opening of Semua House.

“If the mall management decides to impose higher rent afterwards, it is within their rights.

Chong, who has been operating for the past 25 years, however, stressed that the complex should continue to focus exclusively on local brands.

“Traditional wear such as songket are the main draw here and this is a reflection of our culture and heritage.

“High-end brands might sell at malls such as Pavilion Kuala Lumpur and Suria KLCC but not here,” he opined.

Glory days of the past

Located near busy Jalan Tuanku Abdul Rahman, Semua House had all the ingredients for vibrant business.

Its proximity to other hotspots such as Wisma Yakin, Campbell Complex, Sogo shopping centre and Pertama Complex further enhanced its attractiveness.

This was also where Habib, a premier jewellery brand, set up its first showroom in Kuala Lumpur after a successful stint in Penang.

Every Saturday, a big crowd would flock to the area as this was when the adjacent Lorong Tuanku Abdul Rahman was closed for a night market.

At present, the complex houses 40 retail lots and 20 kiosks on B2, B1, ground floor and first floor. 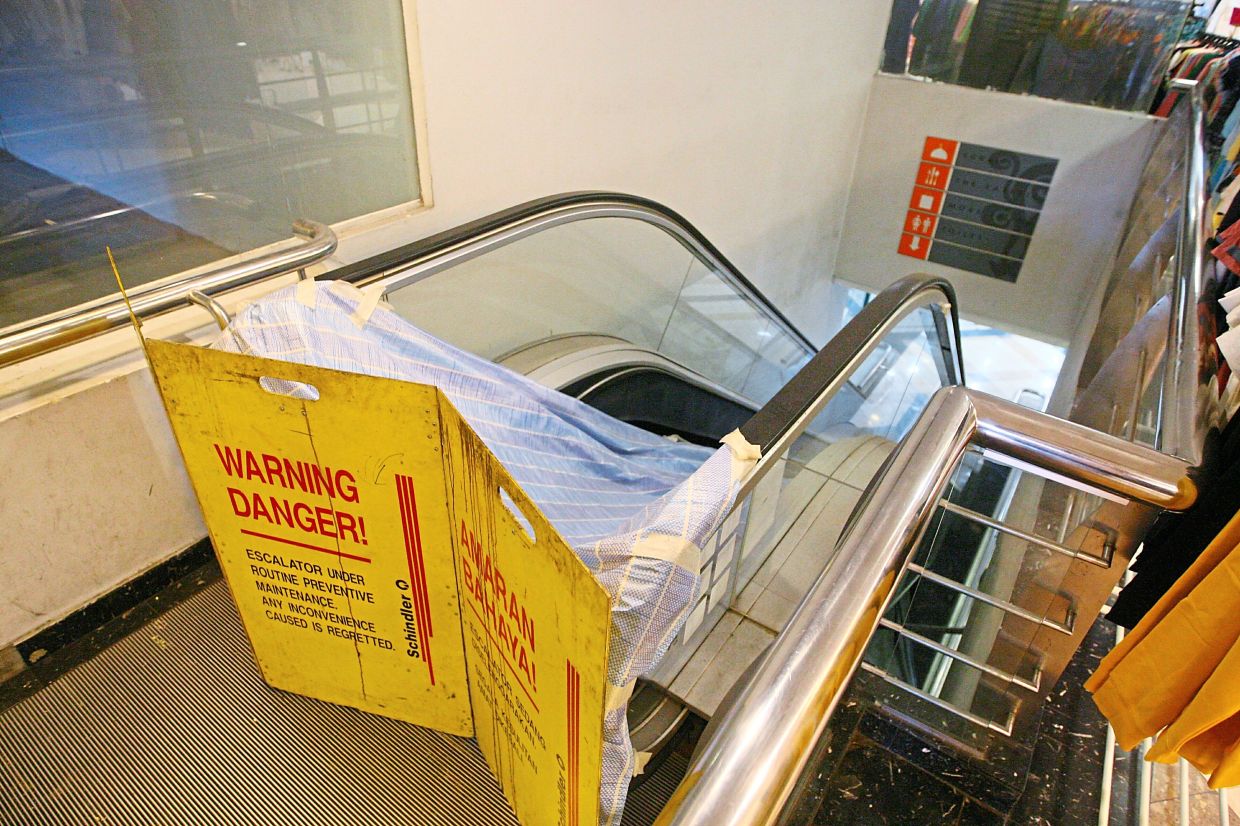 Many facilities like this broken-down escalator are in need of an upgrade.

Tan confirmed that plans were in the pipeline to renovate the retail area, with a target of completion by the third quarter of next year.

“We have been talking about renovation for five years but the pandemic happened and we were forced to hit the pause button.

“Semua House has had a good run but it has become outdated compared to newer malls.

“It has a loyal customer base among older folk only,” he noted.

With the renovation, he said an open space would be created to attract younger shoppers too. 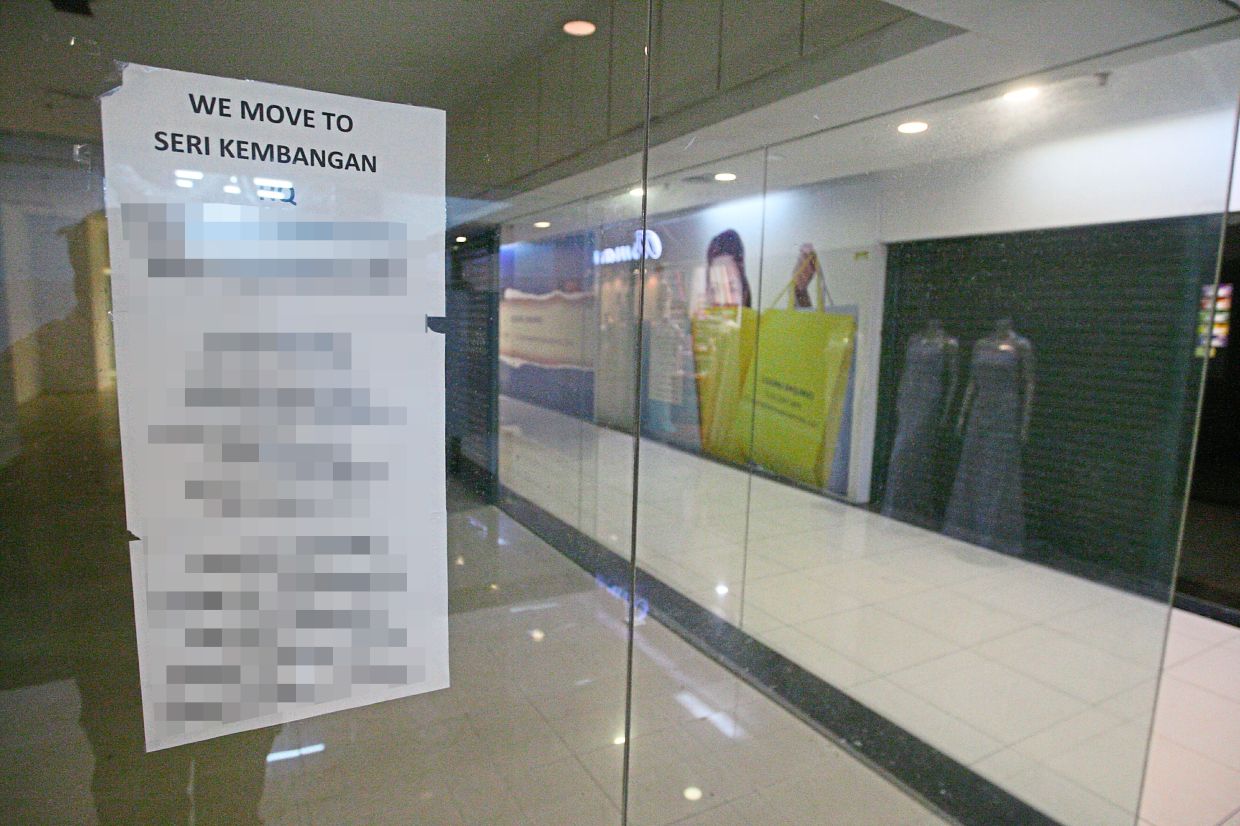 A vacated shoplot with a sign announcing the business has moved to another location.

“We are looking at diversifying activities inside the mall to include cultural shows and art exhibitions,” he added.

Asked if Semua House would feature international luxury brands after the renovation, Tan said this was never part of the strategy.

“We aim to remain as local as possible to reflect the image this area is known for,” he stressed.

On plans for the upper floors, he said several options were being considered, like turning them into hotels or serviced apartments.

“We are meeting with industry players to discuss some proposals but nothing has been confirmed yet.

“For now, our focus is on the retail space,” he reiterated.

This Malaysian transformation coach believes that its time to break free!

Anwar dismisses Rashid’s claim he is going for Ampang seat

NFL Players Threatened With Punishment Thanks To Tom Brady

Hockey player Kirandeep gets offer to do medicine at UPM

The sustainable art of living

Non-Malay parties, opposition contributed to BN’s downfall in GE14, says Hadi KUALA LUMPUR: The downfall of Barisan Nasional (BN) in the last general election was not solely due to Umno ... Read more »

DBKL to be taken to court over flood mitigation plans

Zahid warns BN of ‘enemies under the blanket’

Ismail calls for UN Habitat to set up office in Malaysia

PH will offer itself as viable alternative to PN and BN

PH will offer itself as viable alternative to PN and BN PENDANG: Pakatan Harapan (PH) will not be distracted by internal bickering among parties in the current federal government. Instead, ... Read more »

Anwar Ibrahim said PKR makes no apologies for championing the cause of all Malaysians while upholding the status of Malays and Islam. (Facebook pic) BATU KAWAN: Opposition leader Anwar Ibrahim ... Read more »

Six youths who performed stunts on motorbikes on BKE arrested

Saifuddin in a statement tonight said the student is in good condition and will continue his studies at the university. – Bernama Photo PUTRAJAYA – A Malaysian student at Al-Azhar ... Read more »

Pas practices mature politics despite being the most bullied - Abdul Hadi

PN leaders not on the same page, says Ahmad Maslan

Ahmad said it was up to the UMNO Supreme Council to decide on the matter. – Bernama Photo PONTIAN – Conflicting views about Barisan Nasional (BN) among Perikatan Nasional (PN) ... Read more »

DAP, PH must work together to fight corruption

DAP Secretary-General Anthony Loke during his speech at 2022 DAP Special Congress here, today. SHAH ALAM – DAP together with Pakatan Harapan (PH) must respond to the Sultan of Perak, ... Read more »

Photo for illustration purposes only – 123RF Photo KULAI – The Johor government will relook at new housing projects in the state to ensure that developers also focus on improving ... Read more »

Malaysia supports Bucharest declaration on building better digital future KUALA LUMPUR: Malaysia, in principle, supports the aspirations of the Bucharest Declaration on ‘Building a Better Digital Future for All’ which ... Read more »

Ahmad Faizal said the participation of six World Tour teams was proof that the LTdL continued to get the attention of the world’s top sides. – Bernama Photo KUALA LUMPUR ... Read more »

A stable economy will bring back Malaysian workers, says Saravanan

A stable economy will bring back Malaysian workers, says Saravanan ISKANDAR PUTERI: Malaysia continues to lose its manpower to other countries despite various efforts to keep them including those taken ... Read more »

Win the fight against acne

Win the fight against acne SKIN and body care brand Himalaya Malaysia has launched its latest campaign that aims to foster confidence and self-esteem among young adults. Called ‘Win The ... Read more »

Nurul Izzah Anwar said PKR’s priority was to save the “lost generation” of students in vocational and technical education. SEBERANG PERAI: Wanita Barisan Nasional’s idea of a women-only university is ... Read more »

Cuepacs: 50% of civil servants still unable to own homes

An MP has called for dual carriageways to be built on roads to border towns such as Tebedu. PETALING JAYA: The federal government needs to improve Sarawak roads leading to ... Read more »

Floodwater rose to knee level in less than an hour, says victim

Iran vows 'no leniency' against wave of women-led protests

Ciro Immobile takes a step back

Larson on possible Texas changes: "Anything would be better"

Democrats in Florida seek to win over Latinos on gun control