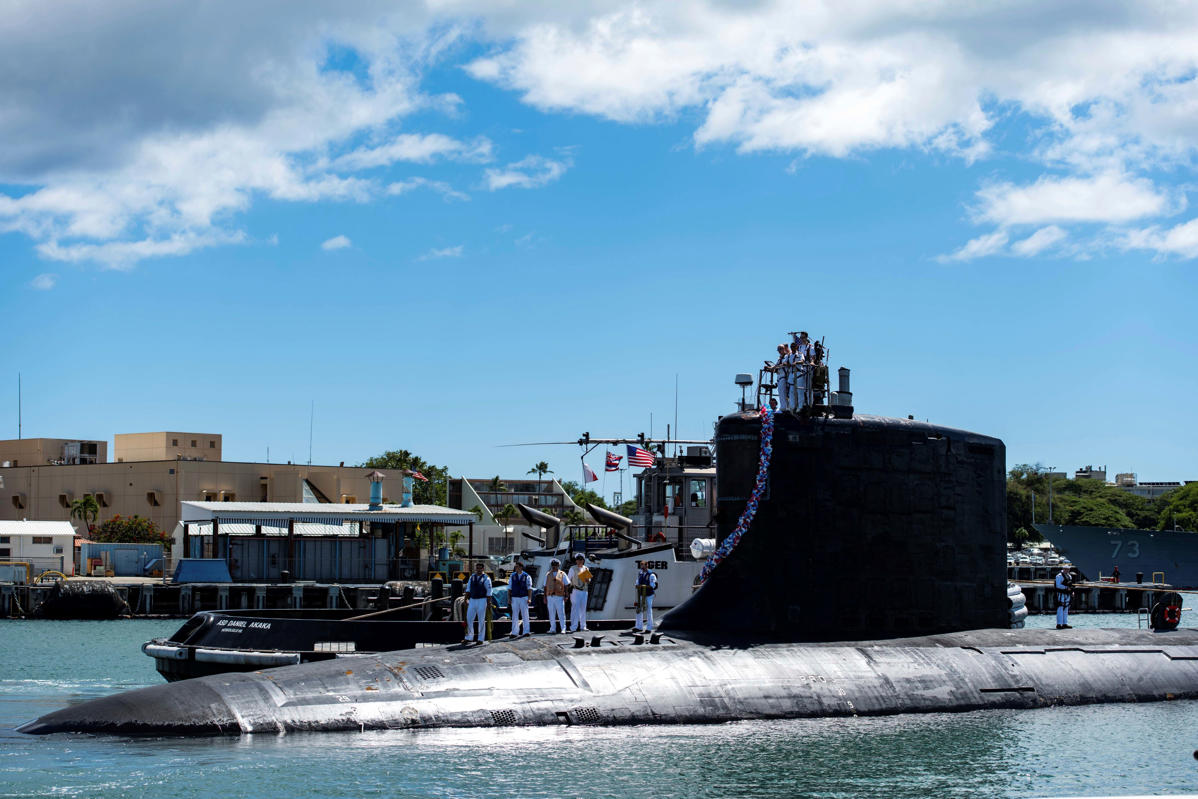 China’s scathing reaction to Australia’s nuclear submarine deal is unlikely to translate into trade sanctions in the short term, according to experts.

A day after Australia, the US and the UK unveiled a newly-formed trilateral security partnership called AUKUS, China lambasted the alliance, labelling it an “extremely irresponsible” threat that “seriously undermines regional peace and stability and intensifies the arms race”.

It is the latest incident in a deteriorating relationship between Australia and its biggest trading partner.

Previous tensions have resulted in China slapping trade restrictions and sanctions on industries including lobster, barley, wine and beef.

“Most of the ammunition has already been fired [because] China has applied trade sanctions to nearly all of Australia’s major exports where it is able to,” he said.

“In many of the [impacted] industries, particularly here in Western Australia, trade is effectively suspended [so] it’s not likely to get much worse than that.”

The remaining potential targets for sanctions could include international students and tourism, Dr Wilson said, but iron ore was likely off the table for now.

“The iron ore trade … has been unaffected largely because of its systemic importance to China,” he said.

“Its steel industry, its construction industry and its heavy industry can’t operate without WA iron ore.

“It would require an extraordinarily poor deterioration in relations — to a ‘brink of war’ kind of scenario — before that would start being changed.”

China’s previous trade punishments were mostly in response to unilateral decisions, such as Australia’s push for an independent inquiry into the origins of COVID-19.

“China will be reluctant to single out one of those [AUKUS] partners for retribution and so perhaps it will hold its powder until another unilateral decision,” she said.

Potential future issues in the Australia-China relationship may include the upcoming review into Chinese ownership of the Port of Darwin.

China would also be angered if new Commonwealth powers were used to close Confucius Institutes at Australian universities.

In the meantime, Ms Kassam said there was not much Australia could do to repair the frosty relationship.

“The best-case scenario here is that Canberra and Beijing find a way to put a floor on this spiralling relationship and to stop this kind of tit-for-tat behaviour,” she said.

“Australia would argue that it has only been responding to China’s coercive actions but it’s clearly not in both countries’ interests to have this level of animosity.”

That was partly because while Australia’s iron ore industry appeared untouchable for now, that would not be the case forever, Ms Kassam said.

“It’s very clear that Beijing is planning to wean itself off iron ore in the long term,” she said.

“There’s very little incentive from the Beijing side to try to improve the relationship.”

Future changes to China’s demand for iron ore is not the only issue affecting the future of Australia’s economy.

“So much of Australia’s coal and gas exports go to countries that have set net zero [targets] for 2050 or 2060,” Ms Kassam said.

“Ultimately, a sustainable approach is going to require significant change in Australia and China is only a part of that story.”

Knicks' Obi Toppin has strong start to his second season

All you can eat? I take those words as a promise – and a challenge

How a baby-faced gangster shot dead alongside his father in a daylight execution lived like a hoarder with toilets, building junk and even a kitchen sink strewn around the yard

KOURTNEY Kardashian is still on Cloud 9 after her “dream” engagement to Travis Barker, and has the photos to prove it. The 42-year-old reality star posted a plethora of new ... Read more »

Goa wants rich tourists, not ones who cook food on a bus: State Tourism Minister

© Provided by Business Today Goa wants rich tourists, not ones who cook food on a bus: State Tourism Minister When asked about the post-pandemic revival of the tourism industry ... Read more »

Soldier from Madhya Pradesh killed in Kashmir on his birthday

© Provided by Hindustan Times Jammu and Kashmir: Indian Army personnel Karnveer Singh Rajpoot was martyred in an encounter with terrorists in Shopian district of Kashmir on Wednesday on his ... Read more »

One of NSW’s most notorious politicians, the former Labor powerbroker Eddie Obeid, 77, has been sentenced to seven years in jail, while his co-conspirator, the former NSW minerals minister Ian ... Read more »

© Provided by Business Insider Australia Image: iStock/Bet_Noire Originally an American tradition, Black Friday is a huge sale event that signifies the start of the Christmas shopping season. For 2021, ... Read more »

How To Disable Apple TV Keyboard Notifications on iPhone

© Provided by News18 How To Disable Apple TV Keyboard Notifications on iPhone Let’s face it, trying to input text using the navigation buttons on a television remote is annoying, ... Read more »

CoWIN can be customised, scaled up for health interventions across the globe: MEA secretary

© Provided by The Print 13th round of the Corps Commander-level talks held at the Chushul-Moldo border meeting point on 10 October, to discuss disengagement from Patrolling Point 15, reached ... Read more »

Delhi-NCR wakes up to clear weather; min temperature may dip to 19 degree C

© Provided by The Statesman Delhi-NCR wakes up to clear weather; min temperature may dip to 19 degree C Delhi-NCR woke up to a clear Thursday morning with the maximum ... Read more »

What you need to know about heat pumps: Ten questions answered

© Provided by This Is Money MailOnline logo Gas boilers are out and heat pumps are in. That was the message delivered by Prime Minister Boris Johnson this week as ... Read more »

Conor McGregor shared his grieving process with the world after announcing on Wednesday that his dog Hugo had died.  The 33-year-old MMA superstar shared a bevy of sweet photos with ... Read more »

THE human remains found on Wednesday near a backpack and notebook in a Florida swamp very likely belong to Gabby Petito’s fugitive fiancé Brian Laundrie, his “heartbroken” parents’ lawyer has ... Read more »

Gitex 2021: The 'technology octopus' has changed our post-Covid lives forever

© Provided by The National Third day of GITEX 2021 at the World Trade Center in Dubai. (Photo: Antonie Robertson / The National) The future has never seemed closer than ... Read more »

US: Donald Trump announces plans to launch his own social network

Jhunjhunwalas hike stake in Titan for first time since Dec 2019

NEW DELHI: The jhunjhunwala duo, Rakesh and his better half Rekha, bought Titan Company shares in September quarter on a net basis for the first time since December quarter of ... Read more »

© Provided by News18 Last evening, photos of Kareena Kapoor’s son Jehangir Ali Khan had gone viral after he attended a birthday party with the actress. The paparazzi were seen ... Read more »

With an uptick in the world’s largest vaccination drive against COVID-19, India on Thursday crossed inoculation of 100 crore vaccine doses, according to the Ministry of Health and Family Welfare. ... Read more »

In the wake of the tragic death of the member of parliament for Southend West, David Amess, fellow MPs have been talking about how to best protect both politicians and ... Read more »

A lawyer advocating for detainees being held in a Melbourne hotel with infectious COVID-19 patients has told a court their lives are in jeopardy. © James Ross/AAP PHOTOS Advocates want ... Read more »

Where we've seen this Bachie date before

© Provided by Are Media Pty Ltd After so many seasons of The Bachelorette Australia, history is bound to repeat itself from time to time. And Brooke Blurton and Darvid’s ... Read more »

© Mick Tsikas/AAP PHOTOS Nationals senator Susan McDonald expects a deal to be struck with the PM on net zero emissions. Australia’s prospects of locking in a target for net ... Read more »

The logo of SAP is seen on their offices in Reston, Virginia BERLIN (Reuters) -SAP said on Thursday that demand for its cloud business database was growing as the German ... Read more »

© Provided by CapeTalk Businesses that fail to reduce emissions could soon be taxed a higher carbon tax rate if a new bill proposed is passed. This legislation will fast-track ... Read more »

Sunak's budget must navigate the Catch-22 of inflation and recovery

© Provided by City AM There have been some pretty bleak backdrops to budget announcements over the years. In March 2008, Alistair Darling faced the daunting task of delivering a ... Read more »

© Marwan Ali, AP Supporters of Sudan’s transitional government have called for mass rallies in Khartoum on Thursday amid fears the military is plotting to withdraw its support for an ... Read more »

Sajid Javid warns Covid cases could rise to 100,000 a day

© Provided by The Guardian Photograph: Hotli Simanjuntak/EPA Almost one-fifth of the land used for Indonesian oil palm plantations is located in the country’s forest estate, despite a law banning ... Read more »

Libya hosts international conference to drum up support ahead of elections

Could a ship off Yemen’s coast worsen global supply issues? Recent shortages have caused havoc but there are fears a decaying oil tanker moored in the Red Sea could spell ... Read more »

Mumbai cruise drug bust case: Aryan Khan’s bail plea to be heard by Bombay HC on Tuesday. The bail plea of Aryan Khan, who was arrested in connection with the ... Read more »

Takht not shelved, Karan Johar says will get on it after Rocky Aur Rani Ki Prem Kahani

All changes coming to League's 2022 preseason

Frail Bill Clinton releases video message as he recovers from sepsis: ‘I'll be around a lot longer'