At the opening ceremony (Photo: VNA)
HCM City (VNA) – More than 200 photos and documents featuring the development of the National Assembly of Vietnam are being displayed at the Southeastern Armed Forces Museum in Ho Chi Minh City.

The exhibition, which opened on May 4, is to welcome the elections of deputies to the 15th legislature, and all-level People’s Councils for the 2021-2026 tenure.

It gives visitors an insight into the formation of the legislative body, the first general election on January 6, 1946, the 75-year journey of the NA, and the leadership of President Ho Chi Minh in the legislature.

Among the documents on the display are those regarding regulations of the Constitution and laws towards the NA and People’s Councils at all levels, as well as documents relating to the elections.

Visitors at the exhibition (Photo: VNA)
The exhibition also highlights contributions of the armed forces of Military Region 7 to preparations and organisation of the elections.

In his opening remarks, Colonel Thai Thanh Duc, Deputy Chief of the Department of Politics of Military Zone 7, stressed the significance of the exhibition, saying it aimed to raise the awareness of Vietnamese people, especially young officers and soldiers of Military Zone 7, about the NA and elections.

The event will last until the end of May./.
VNA

Vietnam needs over US$32.4 bln to complete 5,000-km long expressways

Particularly, expressway construction projects with a total length of 871 kilometers will be completed and 1,176-kilometer new ones will be started works in the period 2021 – 2025. Of which, the country will… Read more »

The Forest Symphony Project was launched by the Provincial Department of Agriculture and Rural Development of Ninh Thuan, the Thuan Nam District Coastal Protective Forest Management Board and the Foundation for Supporting and… Read more »

Ensuring election campaigns are in line with regulations

Attending a meeting with five candidates in the 15th National Assembly election, voters in the three wards of Ben Nghe, Tan Dinh and Da Kao in District 1 heard presentations on their action… Read more »

The constituency No.10 has five candidates. In presenting his programme of actions if he is elected to the 15th NA, President Phuc pledged to do his best to serve the country and the… Read more » 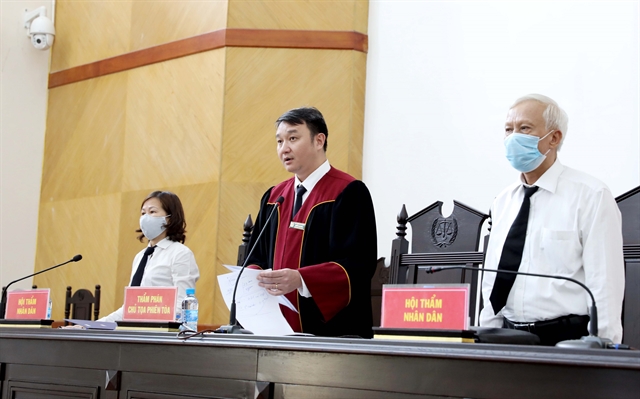 Accordingly, thePolice of HCMC and Long An Province donated VND200 million (US$8,661) to the Police of Phnom Penh, VND100 million (US$4,330) to each of the provincial police forces of Pray Veng and the… Read more »

Challenges ahead for female candidates

An election poster is on display in front of the headquarters of Dong Da District Party Committee. (Photo: VNA) Big sized posters are dispayed on Hanoi streets. (Photo: VNA) Banners are on display… Read more »

Prime Minister Pham Minh Chinh chairs an urgent video conference on May 9 on how to respond to the latest COVID-19 resurgence in the country. (Photo: VNA) An Giang (VNA) – Prime Minister… Read more »

Hanoi (VNA) – Certain upholstered domestic seating originating from Vietnam and China now is subject to anti-dumping duties in Canada, according to the Ministry of Industry and Trade’s Trade Remedies Authority of Vietnam… Read more »

Chairman of the National Assembly Vuong Dinh Hue (centre) attends the ground-breaking ceremony of a project on upgrading 13.4 km of the National Highway 10 in the northern city of Hai Phong on… Read more »

Leaders promise voters they will work hard for national development

An overview of a UNSC session (Photo: VNA) Hanoi (VNA) – As the final minutes of the meeting concluding Vietnam’s Month of Presidency of the United Nations Security Council (UNSC) clocked in, the… Read more »

At the working session in Quang Tri (Photo: VNA) Hanoi (VNA) – Inspection delegations from the Vietnam Fatherland Front (VFF) Central Committee on May 7 held working sessions with the election committees in… Read more »

Officers and soldiers in Truong Sa district cast their ballots during the previous elections in 2016 (Photo: baohaiquanvietnam.vn) Khanh Hoa (VNA) – The National Election Council (NEC) has allowed the holding of early… Read more »

China has no right to ban fishing in Vietnamese waters: Vietnam’s fisheries society

The Vietnam Fisheries Society (Vinafish) has strongly rejected China’s fishing ban in the East Vietnam Sea, affirming that Beijing has no right to impose such a prohibition in the Vietnamese waters. Vinafish released its vehement… Read more »

A subway overpass collapsed on May 3 in the Mexican capital, sending a train plunging to the ground, killing at least 24 people and injuring dozens more. (Photo: Xinhua/VNA) Hanoi (VNA) – President… Read more »

Vietnam ready for Election Day on May 23

Vietnam conveys condolences to Afghanistan over terror attack at school