The European Union has stepped in over the ‘disappearance’ of tennis player Peng Shuai. The former doubles world No 1 went missing after accusing China’s former vice premier of sexual assault on November 2 and, though she has made limited public appearances since, tennis bosses and EU officials want verifiable proof over her safety and wellbeing.

Peng took to Weibo on December 2 to accuse former vice premier Zhang Gaoli of sexual abuse, and in her lengthy post also detailed a consensual on-and-off affair with the retired politician dating back to 2011.

The two-time doubles Grand Slam champion’s post was removed within half an hour, and is believed to be the first made against a high-ranking member of China’s Communist Party, as Zhang served on the party’s Politburo Standing Committee – China’s top ruling council – between 2012 and 2017.

Zhang has not responded to the claims, though a spokesperson for Beijing’s foreign ministry denied all knowledge of the allegations when asked about the subject earlier this month, saying: “I have not heard of it and it is not a diplomatic question.”

The 35-year-old had not been seen or heard from for more than two weeks after making the accusations, but China’s state-affiliated media later shared several social media posts to account for Peng, including a statement she allegedly wrote on Wednesday November 17 and photos of herself she allegedly sent to a friend via WeChat on Friday November 19. 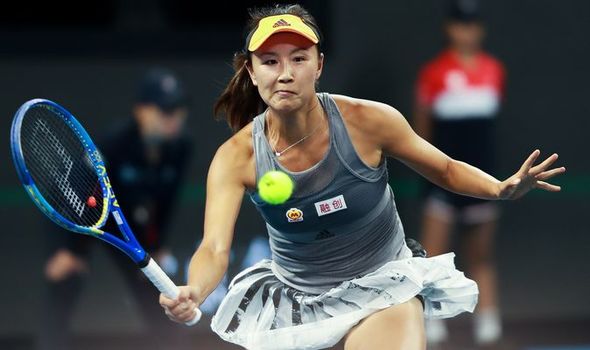 On Sunday November 21, the former singles world No 14 also spoke with the president of the International Olympic Committee in a half-hour video call, with the IOC later releasing a statement claiming Peng told them she was “safe and well”.

However, the CEO and Chairman of the women’s tennis tour has continued to share his concerns for Peng and called the previous videos and photos of her “insufficient”.

The European Union has now stepped in on the matter and reiterated WTA boss Steve Simon’s worries and demands for proof of Peng’s safety, as well as an investigation into her allegations against the former vice premier.

An EU spokesperson said on Tuesday: “Her recent public reappearance does not ease concerns about her safety and freedom.

Raducanu to sacrifice Christmas at home for Australian Open chances

Konta opens up on ‘heart palpitations’ and could miss Australian Open

“The EU joins growing international demands, including by sport professionals, for assurances that she is free and not under threat.

“In this spirit, the EU requests the Chinese government to provide verifiable proof of Peng Shuai’s safety, well-being and whereabouts. The EU urges the Chinese authorities to conduct a full, fair and transparent investigation into her allegations of sexual assault.”

The EU’s recent statement comes after the WTA confirmed CEO and Chairman Simon had received two emails from Peng he believed were influenced by others, after numerous attempts to contact the Wimbledon and French Open doubles champion.

“Steve Simon has reached out to Peng Shuai via various communication channels,” the WTA said in a statement on Saturday. 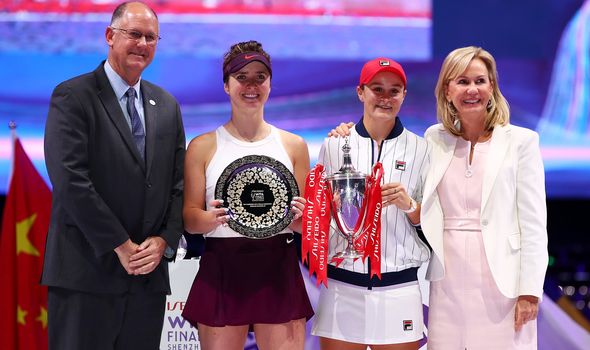 © Getty WTA chief Steve Simon has threatened to remove all events from China, including the WTA Finals

“He has sent her two emails, to which it was clear her responses were influenced by others. He remains deeply concerned that Peng is not free from censorship or coercion and decided not to re-engage via email until he was satisfied her responses were her own, and not those of her censors. The WTA remains concerned about her ability to communicate freely, openly, and directly.”

The WTA boss himself has previously threatened to remove all tournaments from China, including the prestigious year-end WTA Finals which is currently in a ten-year deal to be held in Shenzhen, if the matter is not resolved as he has requested.

On Friday November 19, Simon sent a letter to the Chinese Ambassador to the United States, requesting assistance for the matter to be “successfully resolved”, detailing his two requirements in full.

He wrote: “First, there needs to be independent and verifiable confirmation that Peng Shuai is safe. So that her fellow players and fans everywhere can know she is safe, I request she be allowed to leave the country or speak live via teleconference with me with no one else present, unless it is with Peng’s permission.

“Second, the accusation of sexual assault is serious. As the leader of a women’s tennis organization, I think it is vital to see that this allegation is investigated fairly, fully, transparently and without censorship. Anything less would be a setback for the rights of women, not to mention the cause of justice.”

Manchester United forward Anthony Martial could have a shot at redemption after being included in Ralf Rangnick‘s squad to face Brentford. It comes after the forward spoke to the United ... Read more »

PHILADELPHIA — Oliver Wahlstrom scored in the ninth round of the shootout Tuesday night and the Islanders beat the Flyers 4-3 to claw their back to .500 after more than ... Read more »

The 2020 election wasn't stolen. But Douglas Frank and his bogus equation claiming otherwise are still winning over audiences.

Douglas Frank, an Ohio math teacher, affixed his Texas flag print bow tie, led a booming rendition of the National Anthem and then walked a crowd through an absurd mathematical ... Read more »

NYPD cop and suspect both shot in the Bronx

The cop and suspect were taken to separate hospitals for their injuries. Christopher Sadowski An NYPD cop and a suspect were both shot in the Bronx on Tuesday night, police ... Read more »

© Provided by Al Jazeera As many as 20 Conservatives elected at the last general election in 2019 plan to submit letters of no confidence in Johnson, according to the ... Read more »

Man killed and several injured after bridge collapses in Lancashire

© PA police officers – PA A man has died and several others injured after a vehicle and trailer fell into a river when a bridge collapsed in Roeburndale, Lancashire, ... Read more »

Internationally-acclaimed golfer Catriona Matthew and former Scotland footballer Rose Reilly are among more than 100 people to be honoured at the Palace of Holyrood on Wednesday. The sports stars are ... Read more »

School closures have been made with politics in mind — not science

School closures have been found to harm students in their studies. AP Photo/Jessie Wardarski The long-term closing of schools, and the harm it did to children nationwide, was a decision ... Read more »

© Provided by Interaksyon MANILA — The Philippines’ swine inventory increased by about 700,000 heads over the last 12 months owing to a repopulation program, following two years of declines ... Read more »

THE Manila City government is set to procure the treatment drug Bexovid against the coronavirus disease 2019 (Covid-19) after the Food and Drug Administration (FDA) granted a compassionate special permit ... Read more »

California State University has become the first university system in the country to add caste to its anti-discrimination policy. On the system’s 23 campuses across California, caste-oppressed students will now ... Read more »

The National Archives plans to release four pages of Trump-era White House documents to the House on Wednesday, in what appears to be the first time the committee that’s investigating ... Read more »

A Chinese couple who were trapped on a neverending date thanks to a virus lockdown have been relieved to find that love, not Covid, is in the air. © Philip ... Read more »

The latest Quinnipiac University poll found that 49 percent of Americans believe the president is doing more to divide the country, while only 42 percent said he’s working to unite ... Read more »

© Provided by GamePur Crafting in any MMO is usually a time commitment. The process of leveling crafting professions usually entails of farming or purchasing basic materials, spending a few ... Read more »

© Provided by Jonesboro KAIT KAIT JONESBORO, Ark. (KAIT) – As the Covid-19 pandemic continues to impact the education field, one company is hoping to make it easier for students ... Read more »

© Provided by Times Live Alleged parliament arsonist Zandile Mafe and the state are heading for a showdown in court. The high court in Cape Town will hear two applications ... Read more »

© Provided by Independent Online (IOL) The Western Cape High Court has thrown out the EFF’s urgent application that sought an interim interdict to suspend the implementation of sanctions against ... Read more »

Legal experts taking ANC to court – to END the State of Disaster!

© Provided by The South African Legal heavyweights have vowed to bring the ANC government to court, in a bid to end the COVID-drive State of Disaster laws once and ... Read more »

© Provided by The South African Alleged parliament arsonist, Zandile Mafe’s legal team is expected to challenge the Magistrate Court order that referred him to Valkenberg Psychiatric Hospital for 30 ... Read more »

JOHANNESBURG – Transport Minister Fikile Mbalula says a more relaxed lockdown this festive season was no excuse for a significant rise in road deaths. Almost 1,700 people were killed in ... Read more »

© Provided by Independent Online (IOL) Chloe Bailey has brushed off rumours of a romance with rapper Gunna. The Chloe X Halle star appeared to dismiss speculation the pair are ... Read more »

‘It's all rumours': Defence lawyer on claims parliament ‘arsonist' has Covid-19

© Provided by Times Live The high court in Cape Town will hear Mafe’s application to review and set aside the Cape Town magistrate’s court’s decision to refer him for ... Read more »

© Provided by The South African American actress Megan Fox shared an intimate clip of her bath with rapper Machine Gun Kelly on her Instagram Stories on 17 January.  WATCH: ... Read more »

Smartmatic sues Mike Lindell for defamation, saying he is 'crazy like a fox' and alleging he 'intentionally stoked the fires of xenophobia and party-divide for the noble purpose of selling his pillows'

THE Commission on Elections (Comelec) slammed the group that tried to deceive the poll body to cancel the certificate of candidacy (CoC) for president of former senator Ferdinand “Bongbong” Marcos ... Read more »

People have called out Grab following a video showing one of its delivery riders getting slapped around social media. © Provided by Dailypedia The footage was first shared on TikTok ... Read more »

Sydney, Australia – Nurses in New South Wales, home to a third of Australia’s nearly 26 million people, are coming under increasing pressure as an Omicron-fuelled wave of COVID-19 sweeps ... Read more »

Patryk Milner, 7, from Sandbach, Cheshire died after collapsing in his classroom An inquest heard that he was a 'fit and healthy child' with no causes for concernA coroner concluded he died from undiagnosed sudden cardiac dysrhythmia Read more »

Gwynedd Council has voted to celebrate St David's Day with a bank holidayIt comes after proposals were refused by Westminster over business disruptionRefusal described as 'really offensive and insulting' by furious councillors Council's workforce to have day off despite fears it could cost up to £200,000  Read more »