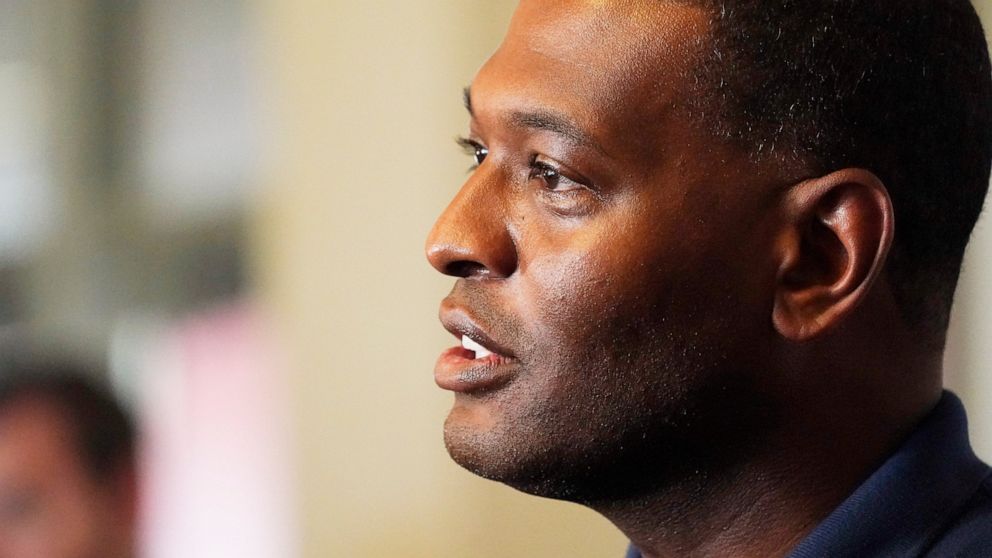 FILE – Environmental Protection Agency Administrator Michael S. Regan discusses elements of a coordinated response of federal, state and city agencies, that he hopes will help deal with the city’s long-standing water problems, during a Wednesday news briefing, Sept. 7, 2022, in Jackson, Miss. Regan returned to Jackson on Sept. 26, 2022, to meet with officials about developing a plan to fix the city’s troubled water system. (AP Photo/Rogelio V. Solis, File) The Associated Press

In a news release, the office of Mayor Chokwe Antar Lumumba said it plans to work with the U.S Justice Department and the EPA to seek aid for Jackson by citing “violations” under the Safe Drinking Water Act.

At a meeting with Lumumba and U.S. Assistant Attorney General Todd Kim, Regan said the federal government would work with the city to “deliver long overdue relief for Jackson residents.”

“The people of Jackson, Mississippi, have lacked access to safe and reliable water for decades. After years of neglect, Jackson’s water system finally reached a breaking point this summer, leaving tens of thousands of people without any running water for weeks,” Regan said. “These conditions are unacceptable in the United States of America.”

Regan said he wants to work with city officials to reach a “judicially enforceable agreement” that ensures Jackson can sustain its water system in the future. A Department of Justice spokesperson declined to specify what such an agreement could entail. The purpose of the meeting was to discuss how the federal government might protect public health in Jackson and address “longstanding environmental justice issues” facing the city, the spokesperson told The Associated Press.

Most of Jackson’s 150,000 residents lost running water for several days in late August and early September after heavy rainfall exacerbated problems in the city’s main treatment plant. The EPA had already issued a notice in January that Jackson’s system violates the federal Safe Drinking Water Act. Lumumba said coordination with the federal government represents the best path forward for the city to fix its water system.

“We believe that it is imperative that we enter into agreements with a team that is solely and sincerely focused on an objective of ensuring safe and reliable drinking water to the residents of Jackson,” Lumumba said in the news release.

On Sept. 15, Mississippi Gov. Tate Reeves and the state health department told people in Jackson that they no longer had to boil water before drinking it or using it to brush their teeth. But disruptions to clean water in parts of the city continued.

Lumumba's office announced new boil-water notices Monday affecting approximately 1,000 water connections in the city. A city spokesperson said a contractor inadvertently severed a water line. This came after multiple major water leaks occurred the previous weekend. Several areas were placed under a precautionary boil-water notice, including the neighborhood home to Millsaps College. The college has asked for donations to help build its own water source.

The EPA said 300 boil water notices have been issued over the past two years in the city, most of which came before the most recent drinking water crisis. “It’s clear this community has suffered long enough,” Regan said.

In early September, Regan came to Jackson to meet with residents and elected officials about the water problems. He said the city needs to receive “its fair share” of federal money to repair the system.

A stopgap funding package Congress is set to consider this week includes disaster assistance for Jackson, a person familiar with the legislation said Monday.

Before the latest water crisis, Jackson had already been under a boil-water notice since late July because of cloudy water that could make people ill. Tests by the state health department in 2015 found higher-than-acceptable lead levels in some water samples.

An independent watchdog in the Environmental Protection Agency said in September it was being brought in to investigate Jackson's troubled water system.

In September, four Jackson residents filed a class-action lawsuit in federal district court against the city, Lumumba and his immediate predecessor, three former public works directors, an engineering firm and a business that had a city contract to replace water meters. The lawsuit seeks to force Jackson to make specific fixes, including the removal or repair of pipes and equipment contaminated with lead.

Regan said the EPA has a responsibility to protect the health of Jackson residents.

“The people of Jackson, like all people in this country, deserve access to clean and safe water,” Regan said. “They also deserve more than words – they need action.”

Associated Press Writer Matthew Daly contributed to this report. Michael Goldberg is a corps member for the Associated Press/Report for America Statehouse News Initiative. Report for America is a nonprofit national service program that places journalists in local newsrooms to report on undercovered issues. Follow him on Twitter at twitter.com/mikergoldberg.

U.S. eliminated from World Cup after 3-1 loss to Netherlands in Round of 16

This ATM at Art Basel has a twist: It posts a picture of you with your bank balance

(L-R): Top row: After a holiday hiatus, broadcast networks ABC, CBS, Fox, NBC and The CW will be back for anticipated midseason returns of procedural favorites, along with winter premieres ... Read more »

Here's Why The USS Zumwalt Is The Ultimate Destoyer

Here’s Why The USS Zumwalt Is The Ultimate Destoyer As you might imagine, stocking one of the most powerful military forces in the world doesn’t come cheap. Specifically, the United ... Read more »

We just love a happy ending! We love nothing more than when a cat finds its human. Whether it’s a shelter cat or a stray cat, getting these animals into ... Read more »

Arrest Made In Death Of Middletown Man Run Over In Parking Lot OLD BRIDGE, NJ — A Sayreville man was arrested Friday and charged in the death of a Middletown ... Read more »

One injured after leaping from burning vacant building in Minneapolis

Authorities say the building is known to be used by squatters. One person jumped from the second floor of a vacant Minneapolis building after a fire broke out Saturday morning. ... Read more »

A couple accused of spending $10.5M sent in error by Crypto.com on houses, a car, furniture and gifts face trial for theft

Florida man Nicholas Truglia was sentenced to 18 months in prison on Thursday for his involvement in a fraud scheme that led to the theft of millions from cryptocurrency investor ... Read more »

How to Use the Same WhatsApp Account on Two Phones Officially

WhatsApp is one of the most widely-used instant messaging apps despite lacking several features. For example, Telegram lets you use the same account on multiple devices but unfortunately, the same ... Read more »

The State Attorney’s Office is expected to determine whether to formally file criminal charges – which ones and how many of them – against Kitna in coming weeks. Read more »

Balenciaga’s creative director Demna Gvasalia apologized for what he said was a “wrong artistic choice of concept” after the luxury fashion brand was criticized over an advertising campaign that featured young children ... Read more »

Conspiracy theorist Alex Jones has been banned across social media, but this week he still found a megaphone.  Ye — the megastar formerly known as Kanye West — joined Jones’ ... Read more »

The Planet Sport tipsters are In England, Scotland and Ireland for three meetings on Sunday, December 4 and will be looking for some winners at Fairyhouse, Huntingdon and Kelso. Read more »

A children’s hospital in the capital of Newfoundland and Labrador’s says it has had to cancel some surgeries and appointments due to a high level of respiratory illness. Newfoundland’s Eastern ... Read more »

The City of Toronto is under a wind warning warning with winds of up to 90 km/h expected on Saturday. Environment Canada issued the warning for “strong winds”. The weather ... Read more »

A 16-YEAR-OLD girl has died after taking an “unknown” tablet in a nightclub. Cops have arrested a teenage boy in connection with her death in Exeter, Devon, in the early ... Read more »

SHOCKING footage shows the moment hazmat-clad authorities dragged a man out of his home after he refused to go to a quarantine camp. China's draconian lockdowns have sparked protests in ... Read more »

A NINE-year-old boy suffered horrific life-changing injuries after being mauled by a pitbull. Alejandro Mizsan's face was “destroyed” in the gruesome dog attack while he was playing with pals near ... Read more »

Labor Secretary: U.S. immigration system is 'a threat to our economy’

While it may be unlikely in a politically divided Washington, Labor Secretary Marty Walsh says that immigration reform is what should be top of mind for lawmakers after Friday’s November ... Read more »

TESCO have started putting security tags on cheese amid reports of hard-up Brits having to steal everyday items due to rising costs. One customer said the move was a “sign ... Read more »

In this file photo from July 29, 2020, Aileen Cannon testifies remotely before the U.S. Senate Committee on the Judiciary on her nomination to be United States District Judge for ... Read more »

Alaska Airlines says bag tags will be available for all guests, starting in 2023 Read more »

John Lamparski/Getty Images Over the span of the last 30 years or so, Ben Stiller has become one of the most powerful people in Hollywood as a bankable name associated ... Read more »

Ovidiu Hrubaru/Shutterstock “Modern Family,” one of television’s most adored and awarded sitcoms, broke barriers with its unique formatting and commitment to authentic representation. The series unconventionally blends a mock-documentary style ... Read more »

Strep A UK: father’s warning as girl, 4, with Strep A ‘fighting for her life’

The father of a four-year-old girl with a Strep A infection who is on a ventilator said she was described as “the poorliest girl in the whole of England”. Camila ... Read more »

Boil-water notice in Penticton, B.C. to remain in place for weekend

Why Spotify Shuffle is Not Truly Random

Joe Fedewa / How-To Geek If you’ve ever used the shuffle button on Spotify, you’ve probably noticed it often doesn’t feel random at all. Turns out this is by design, ... Read more »

A scientist who worked at a research lab in China has claimed that COVID was a man-made virus that leaked from the facility. AFP via Getty Images A scientist who ... Read more »

You know who had a bad Friday night? The Yankees. The Mets lost Jacob deGrom, but his signing in dollars spent and the team that landed him offered the blueprint ... Read more »

The accident took place around 11:00 p.m. Friday evening. Seth Gottfried A 28-year-old man was killed when the car he was riding in slammed into a disabled tractor trailer overnight ... Read more »

This France Team Was Supposed to Be Cursed. They Sure Don’t Look That Way.

Photo illustration by Slate. Photo by Ryan Pierse/Getty Images. We might as well start with the witch doctor. The story may have faded from memory a bit since its protagonist, ... Read more »

Report: UC Down To Two Head Coach Candidates, Major Name Out Of Running

Cincinnati is keeping most of their coaching info under wraps in this cycle. CINCINNATI — More nuggets are surfacing around Cincinnati football’s open head coach position. According to John Brice, ... Read more »

How to Get Your Spotify Wrapped for 2022

Spotify Wrapped is a fun annual tradition that allows Spotify users to check out their most listened to music for the year, as well as review some other fun stats ... Read more »

Sam Bankman-Fried has defended himself as a well-meaning entrepreneur who got in over his head, claiming FTX's collapse had nothing to do with fraud Read more »

Why Teddy Brimley From The Blacklist Looks So Familiar

Who is Tanner Horner? FedEx Driver Who Confessed to Killing 7-Year-Old Athena Strand

Lake runs dry: What is next for much-hyped MAGA star after Arizona defeat

Krasner sues to stop lawmakers from removing him

Waiving fees for library books promotes our culture of no accountability