Emma Raducanu hit an incredible shot in her exhibition encounter with Elena-Gabriela Ruse which she was warned she would ‘get in a bit of trouble’ for if she repeated on tour. Co-commentator Claire Curran gushed about a sliced backhand down the tramline as the US Open champion took control against her close friend.

Raducanu and Ruse were involved in a tense rally in the third game of the first set, with the former forcing her opponent around the baseline.

The 19-year-old had already broken Ruse and was leading 2-0.

The Brit then switched up her game and produced an incredible sliced backhand down the tramline to win an excellent point.

It was a shot that co-commentator Curran loved.

The BBC’s main commentator Gigi Salmon reacted: “What a pick-out from Raducanu!”

JUST IN: Roger Federer dubbed ‘the Lionel Messi of tennis’ by Richard Gasquet 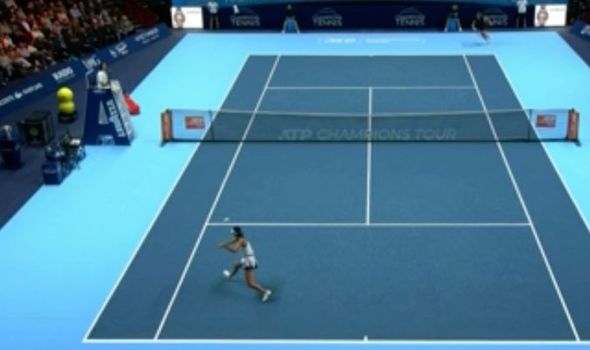 Curran then suggested that she would not be able to risk playing the shot on tour, and that she was taking advantage of the fact she was playing in an exhibition match.

“All I can say is that she will never do that in a main tour match,” the former professional player gushed.

“If she does then I think she would get in a bit of trouble!”

Both players continued to play some excellent shots in a gruelling first set.

Salmon added: “Ruse is saying that she won’t need pre-season. She might be right if the rallies carry on like this.”

Curran then continued to analyse Raducanu’s performance as she eased into the lead.

“She (Ruse) is playing against a human backboard right now. Raducanu is absorbing the pace.”

This match was Raducanu’s first on home soil since she won the US Open in September. The teen star incredibly won at Flushing Meadows despite starting as a qualifier.

She broke several records in the process, not least becoming the first British woman to win a Grand Slam in over 44 years.

Ronnie O’Sullivan compares himself to Roger Federer and Rafael Nadal 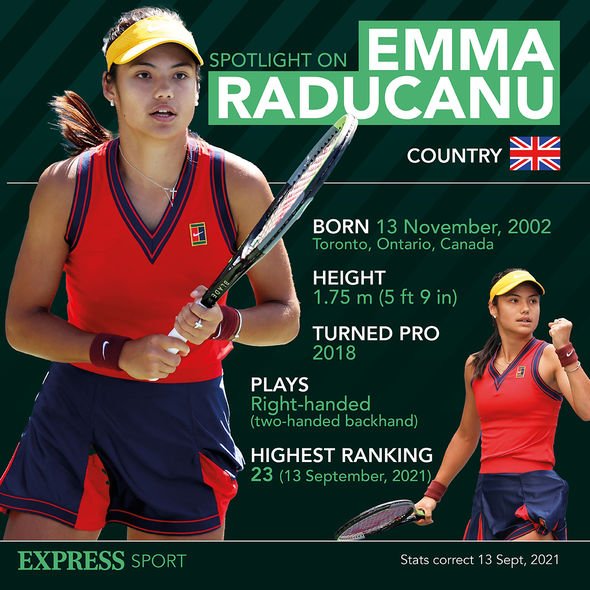 Raducanu has had a slightly difficult period since then. She split with coach Andrew Richardson in the aftermath and went through two tournaments without a full-time coach.

She lost in the round of 64 at the BNP Paribas Open, surprisingly being knocked out by World No 100 Aliaksandra Sasnovich

Marta Kostyuk then defeated Raducanu in the quarter-final of the Transylvania Open.

Raducanu’s form at both Wimbledon – in which she incredibly reached the fourth round and played on centre court – and then at the US Open has seen her rise from 311 to 19 in the world rankings this year.

She is expected to compete at the Australian Open in January.

Biden needs to fix his presidency not for legacy, but for the sake of a desperate nation

Steve Spagnuolo: Up to Andy Reid if Willie Gay plays

No criminal charges in death of Kansas teen in police custody

Ryan Gemser on rescuing 40 cows by Sea-Doo during the B.C. floods

© Provided by The South African Whether you have you’ve set a resolution to lose weight or simply want to start living and eating healthier, it helps to get professional ... Read more »

© Jim Watson—AFP/Getty Images President Joe Biden holds a pen as he prepares to sign a series of orders in the Oval Office of the White House in Washington, after ... Read more »

Javon “Wanna” Walton is a young actor and amateur boxer brimming with potential. Just check out his Instagram for some of his intense training sessions and fights. But he’s much ... Read more »

Erin Napier is opening up about her mental health struggles. On Wednesday, the star of HGTV Canada‘s “Home Town” shared a lengthy post on Instagram looking back on her health ... Read more »

© Provided by GamePur Forza Horizon 5 has many different environments, ranging from volcano peaks, to deep jungles, to even the desert dunes that can be found in Mexico. One ... Read more »

House Speaker Nancy Pelosi said Democratic lawmakers are working on a slimmed-down spending plan that will include some major provisions of President Biden’s failed Build Back Better package. Despite the ... Read more »

A review of President Biden's first year on border policy

© Provided by The Hill Migrants crowd a Border Patrol facility In January of 2021, as President Biden and his team transitioned from the campaign to the White House, addressing ... Read more »

How to unlock all operators in Rainbow Six Extraction

NBA games in 4K are coming to YouTube TV

The view from your couch will look a little more like sitting courtside in the days to come, as Streamable reports on Thursday that YouTube TV will begin offering select ... Read more »

Rachel Brosnahan 'traumatised' after fishing dead rat out of toilet

© Image: Buddy Software AirBuddy 2.5 has a new “Proximity Engine” v2 that should detect and hand off peripherals faster. A new version of AirBuddy for macOS Monterey is available ... Read more »

© Getty Images Peloton shares have plummeted following a report that it has been slowing – and in some cases halting – production of its pricey exercise machines. The company, ... Read more »

AMMAN (Reuters) – Islamic State militants attacked a prison in Syria’s al-Hasaka in an attempt to free prisoners belonging to the group who had mutinied, the Kurdish-led Syrian Democratic Forces ... Read more »

An East London man has received death threats for trying to spread “the truth” about a heritage Bangladeshi language that is being lost. Mace Hoque, a British-Bangladeshi who was born ... Read more »

'Real life Aquaman': Tongan man swims for 27 hours to safety after tsunami swept him out to sea

A 57-year-old Tongan man who swam for about 27 hours after Saturday’s tsunami swept him out to sea is being described as a “real life Aquaman”. © Reuters Lisala Folau ... Read more »

© Provided by DW They’re not going to be happy: Some people took to the street to protest the Austrian vaccine mandate Austria’s parliament on Thursday passed a vaccine mandate ... Read more »

The FAA had warned it would limit low-visibility landings after 5G rolled out, fearing interference with radio altimeters. The agency has cleared 78% of the U.S. fleet to land in ... Read more »

Boris Johnson is battling claims that Tory critics are facing “intimidation” which could amount to blackmail as part of an effort to prevent him being ousted from office. The Prime ... Read more »

© Niall Carson (Niall Carson/PA) Gardai have issued an appeal for information after a man in his 60s died following a crash in Co Longford. A car and an SUV ... Read more »

Phillip Schofield joked about Gok Wan‘s star-studded poker nights on Thursday’s This Morning. Recalling one of the past events, the presenter, 59, joked that Lesley Joseph “took all his money” ... Read more »

© Provided by The Guardian Photograph: Paul McGee/Getty Images Britain’s wind and solar farms could help to reduce households’ energy bills by paying back almost £800m to consumers by the ... Read more »

© Provided by Associated Press Virginia Gov. Glenn Youngkin works at his desk inside his private office at the State Capitol in Richmond, Va., Wednesday, Jan. 18, 2022. The desk ... Read more »

Kayleigh McEnany thanked Fox News host Sean Hannity for his 'playbook' on how to talk to Trump the day after the Capitol riot, according to newly disclosed texts

PEAKY Blinders fans eagerly awaiting the show’s return will not get to see the late Helen McCrory in her role as Aunt Polly. I can reveal she did not get ... Read more »

NADIA Sawalha has opened up about suffering a brutal humiliation on the set of a major TV drama. The 57-year-old made the admission during Thursday's episode of Loose Women, revealing ... Read more »

THIS is the eerie moment George Best's biography flies from a shelf at his ex-wife's home all by itself. Model Alex says she believes she's haunted by spirits following the ... Read more »

PRINCE Andrew was a “handful” as a child – and his nanny dubbed him “Baby Grumpling” because of his tantrums, it's claimed. A series of embarrassing anecdotes about the Duke ... Read more »

Want to be an influencer like Molly-Mae Hague? Be careful what you wish for…

TAKING endless selfies, travelling first class to glam locations and being sent fancy freebies is what being an influencer is all about, right? Wrong. Let’s get this straight. I have ... Read more »

US sanctions four Ukrainians accused of working for Russia

© Provided by Al Jazeera Fresh sanctions come amid a diplomatic push between the US and Russia, which are seeking to defuse growing tensions over a potential Russian invasion of ... Read more »

Everton begins life after Rafa Benitez with a visit from another ex-Liverpool great, as Steven Gerrard leads Aston Villa into Goodison Park for an early Saturday tilt (watch live, 7:30am ... Read more »

'It's something I've been working on; off-the-ball work, the reading of a game'