Emma Raducanu has been praised by her potential next opponent in Romania. The 18-year-old takes on Ana Bogdan on Thursday, with the winner facing Marta Kostyuk in the quarter-final. The Ukranian teenager has already won her third-round, and admitted she’d “love” to play the recent US Open champion.

Raducanu is playing just her second tournament since a historic title win in Flushing Meadows.

The Bromley local became the first-ever qualifier to win a Grand Slam last month, as she won three qualifying rounds and seven main-draw matches without dropping a set, en route to the US Open title.

Ranked at a then-career high of world No 150, Raducanu now sits at No 23 in the world and is the woman everyone wants to beat.

She made an unsuccessful return to the match court earlier this month in Indian Wells, losing to world No 100 Aliaksandra Sasnovich, but finally managed to get her first WTA Tour match-win against Polona Hercog on Tuesday.

JUST IN: Novak Djokovic tipped to reach Federer and Nadal level of status 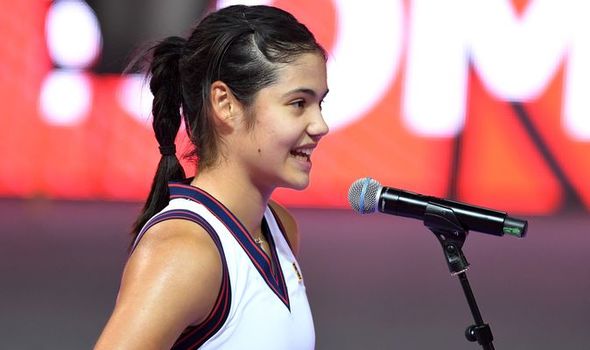 Not only was it the US Open champion’s first-ever win on the WTA Tour, it was also her first tour-level three-set match – showing how unprecedented her rise to the top of the game was.

Raducanu is now preparing to take on Romanian Ana Bogdan in the third round, but her potential quarter-final opponent is already looking forward to a potential clash with the Brit.

19-year-old Marta Kostyuk defeated Mona Barthel 6-4 6-4 earlier on Thursday, and awaits the winner of the clash between the world No 23 and world No 106.

“I would really love to play Emma [Raducanu]. We are the same age,” the Ukranian teenager said after her victory at the Transylvania Open.

The world No 55 was unable to recall whether she had previously played Raducanu when they were children, but eagerly anticipated a future rivalry with the 18-year-old Brit.

She continued: “I don’t think I’ve ever played her. But I once played against Great Britain under-12s and she was in the team.

“I just don’t remember who I played, her or the other girl. It’s been some years since then.

“It’s going to be fun because I’m sure we will have a lot of matches between us [in the coming years]. I’m playing tennis for these kind of matches.” 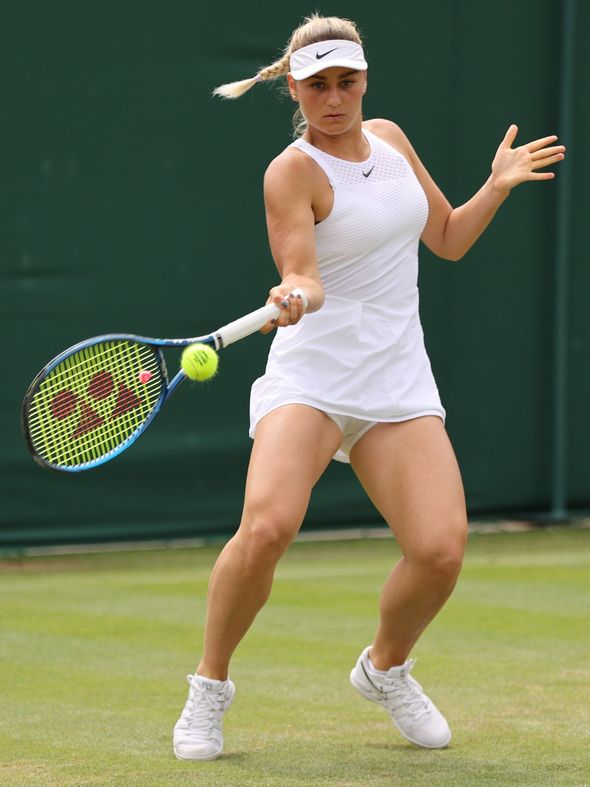 It comes after Raducanu’s third-round opponent Bogdan heralded the 18-year-old as an “inspiration”.

The 28-year-old said of Raducanu’s run to the US Open title: “She is a true inspiration – even to me. I say, everything is possible. That smile and that innocence on her face. I really think that was the key.

“She always kept a very positive attitude, no matter the score. I think that helped her a lot.

“It was an inspiration and an inspiration for many, many girls out there. She is a great athlete and a great champion. I am looking forward to the next match.”

Raducanu, whose father hails from Romania, also chatted with Bogdan in Romanian during a pre-tournament event on Sunday, and the world No 106 opened up on their chat.

“She has a sweet accent. We were talking about Formula 1, we are both fans of F1 and Daniel Ricciardo! If she wants to play for the Romanian Fed Cup squad, she is more than welcome!”

REVEALED: Real reason why Hardik Pandya was not retained by Mumbai Indians

Riding a crest, McIlroy shrugs off mid-round wobble to co-lead

iPhone 12 Pro price cut gets a massive price cut on Amazon: Here's how to avail the discount

Deepika Padukone is a total boss lady in co ords as she heads for Prabhas co starrer shoot in Hyderabad; PICS

The weekend has begun with gorgeous visuals of Deepika Padukone leaving the city to head to Hyderabad to kick off shooting for her film with Prabhas. The gorgeous star was ... Read more »

Leaked: Vicky Kaushal and Katrina Kaif Shaadi ka program; though we are not invited!

© Provided by Zee News New Delhi: The countdown to Katrina Kaif and Vicky Kaushal’s wedding has begun and preparations are underway. With star couple still tight-lipped about the big ... Read more »

© Provided by Business Insider Dr. Anthony Fauci, director of the National Institute of Allergy and Infectious Diseases and the Chief Medical Advisor to the President, delivers an update on ... Read more »

Maryland Governor Larry Hogan (R) announced that three confirmed cases of the omicron variant of COVID-19 were identified Friday among Maryland residents in the Baltimore area. The virus was tested ... Read more »

‘Tis the season: Leona Lewis, Elton John and Ed Sheeran, and Gary Barlow have all delivered Christmas songs this year (Handouts) Whether you’re out shopping, watching the telly, listening to ... Read more »

What we know about L.A. County's first case of the Omicron variant

L.A. County’s first confirmed case of the Omicron variant came from an individual who had returned after flying to South Africa via London on Nov. 22. Above: LAX. (Luis Sinco ... Read more »

Should you be greedy or fearful now? What Sensex history tells us

Jitters from the free fall witnessed recently crept into the first half of the week. However, D-street has started shrugging off these nerves as markets have seen some recovery compared ... Read more »

Dec 3: Wall Street‘s major indexes closed lower on Friday, with the Nasdaq leading the declines as investors bet that a strong jobs report would not slow the Federal Reserve‘s ... Read more »

© Provided by eNCA JOHANNESBURG – South Africa is officially in the fourth wave and getting vaccinated is the best way to ride it out, according to health authorities. COVID-19 ... Read more »

Soweto neighbourhood finally gets attention from the City of Johannesburg’s environmental health division after residents discover what appears to be mercury in the water. © Copyright (c) Daily Maverick , ... Read more »

© Provided by The Times of India BENGALURU: The stigma of having his home sealed was more painful than the disease itself, says the 46-year-old doctor, one of the two ... Read more »

National Testing Agency, NTA has postponed or rescheduled UGC NET Exam 2021 in Odisha and Andhra Pradesh region. The National Eligibility Test to be held on December 5, 2021 has ... Read more »

India worked for a year to get China off Lanka projects

© Provided by The Times of India NEW DELHI: It took India almost a year to get China out of three islands off Jaffna peninsula. In January 2021, India was ... Read more »

‘He Always Apologize When He Offend YT Women': 50 Cent's Apology for Trolling Madonna Backfires as Fans Call Him Out for Steadily Offending Black Women

50 Cent is walking back his trolling comments aimed at Madonna’s recent attempt at being provocative on social media. The pop icon found herself being trolled by 50 when she ... Read more »

Madonna calls out ‘friend’ 50 Cent for ‘talking smack’ about her risqué photoshoot Madonna has hit back at 50 Cent after he mocked the risqué photos she recently shared of ... Read more »

Why Anita Mui will always be in Hong Kong people's hearts, as biopic of the actress and Canto-pop singer reminds us, and why we should honour all who've helped make the city a global icon

Anita Mui is known as the ‘daughter of Hong Kong’ and her rags-to-riches story strikes a chord with many Hongkongers Her life and 20-year show business career are celebrated in ... Read more »

© The Independent Singapore Singapore — A well known infectious disease specialist in private practice predicts that the newly-discovered Omicron variant of the virus that causes Covid-19 is likely to ... Read more »

With Week 13 of the NFL season upon us, it is important to remember that time is running out for you to make the fantasy football playoffs. With the new ... Read more »

Dec. 4—”He said, 'What are y'all going to do, kill me?'” The words, said as part of Aaliyah Lamb's testimony Friday afternoon in the Olmsted County District Court jury trial ... Read more »

SpaceX launched dozens of satellites into orbit aboard a Falcon 9 rocket on the evening of Thursday, December 2, lighting up the sky over parts of Florida. In total, the ... Read more »

Aayush Sharma is the future of Bollywood says Mahesh Manjrekar

© Glamsham/Instagram/Twitter Aayush Sharma is the future of Bollywood says Mahesh Manjrekar Turning into an overnight sensation, Aayush Sharma has marked the beginning of his rise in stardom with the ... Read more »

© Provided by DNA When South star couple Samantha Ruth Prabhu and Naga Chaitanya announced their divorce it left thousand of their fans heartbroken. Pretty much since the news of ... Read more »

Karan Johar is chilling with Alia Bhatt and Ranveer Singh in Delhi winters: ‘Rocky and Rani on a night out'

© Provided by The Indian Express Alia Bhatt and Ranveer Singh’s Rocky Aur Rani Ki Prem Kahani seems like a fun ride with all the new updates coming in from ... Read more »

© Provided by DNA Yahoo has released its Year in Review (YIR) for India for 2021, which includes a list of the year’s most notable personalities, newsmakers, and events based ... Read more »

Which are the ten worst defeats of Mohun Bagan in the last 10 years?

In the 2021-22 season, ATK Mohun Bagan have already succumbed to two embarrassing defeats; one at the continental level to FC Nasaf and the other to a familiar foe in ... Read more »

Want To Block Or Unfollow Someone On Instagram But Can't? Here's How You Can Restrict Them

© Provided by News18 Want To Block Or Unfollow Someone On Instagram But Can’t? Here’s How You Can Restrict Them All Instagram users at least once in a while come ... Read more »

© Ritu Singh | Trending Desk Vegetarian Husband Asks Wife to Choose Between Him & Non-Veg Food Viral News: People on social media have been left in splits after a ... Read more »

Cristiano Ronaldo, Lionel Messi to Pele - Who are the all-time highest goalscorers for club and country?

Cristiano Ronaldo achieved a new career milestone on Thursday as he became the first player ever to score 800 career goals with a brace against Arsenal in Manchester United’s 3-2 ... Read more »

© Somya Lohia Renewable energy to dominate growth in global power capacity through 2026, says IEA Renewable energy is set to account for nearly 95 percent of the increase in ... Read more »

© Provided by The Times of India MUMBAI: Out of the 70 overs that New Zealand bowled on Day 1 of the second Test, 29 were bowled by Ajaz Patel. ... Read more »

© Provided by News18 Pensioners Get More Time to Submit Life Certificate. Know Details Life Certificate Submission 2021: The central government in a recent notification announced that it has extended ... Read more »

Ex-children's minister: ‘We have a duty to put this right' after Arthur's murder

Giant asteroid stronger than a nuke is heading towards Earth. Will it hit the planet?

Here's Why You Should Include Collagen in Your Daily Skincare Routine