Emma RaducanuLink has revealed where she keeps her US Open trophy – and it is not at home in Bromley.

The British No.1 recorded her second victory since her New York triumph at the Transylvania Open today.

The trilingual star conducted some of her post-match interview in Romanian.

But when asked where her US Open trophy is stored, she said: “We have stored it at the National Tennis Centre in London. It is not at home. 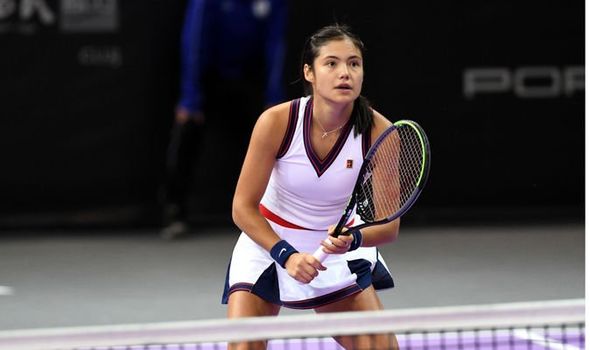 “If you want to see it, it is at the NTC. Why? I just thought that the LTA have done so much for me.

“I just wanted them to have it as a sign and a big thank you for everything they have done to help me through the young ages.

“They have played a huge role in my development.”

Raducanu, 18, is supported by the LTA Pro Scholarship Programme which helps with coaching and travel costs.

The teenager attended the Met Gala in New York and then the London premier of James Bond film No Time To Die.

“He pulled off his pink velvet suit impeccably but I wasn’t close. I was so honoured to be able to wear a Dior gown and attend my first premier in it.

“It was a fun experience but I am just trying to get out on the court and practice and improve. The court is where I really focus on my trade and really improve.”

How to watch Amazon Prime Video on TV: Your complete guide

When is Ballon d'Or 2021? How to watch, nominees, favourites & everything you need to know

NUFC to blow rivals out of the water for potential £29.5m deal, fans surely ecstatic - opinion

In pursuit of American justice | Opinion

A woman has denied murdering her two-year-old son. Natalie Steele, 31, pleaded not guilty to a single charge of killing her son Reid when she appeared before Cardiff Crown Court ... Read more »

Every year, there are special packages launched by the Indian Railways for travelling across India. It has different origins and destinations decided by IRCTC in order to provide visitors with ... Read more »

Burnley left-back Charlie Taylor is targeting an improvement in his attacking stats. The 28-year-old has yet to score since arriving at Turf Moor in the summer of 2017 and his ... Read more »

Rodri believes Manchester City are starting to hit their stride

Manchester City midfielder Rodri believes the champions are now starting to hit their stride. City claimed their fifth successive win in all competitions on Sunday as they ground out a ... Read more »

© Provided by Football League World paul cook Ipswich Town managed to get back on track in League One yesterday as they sealed a 2-1 victory over Crewe Alexandra. Having ... Read more »

© Provided by Football FanCast diaz With Southampton losing their two previous league games and conceding six goals in the process since the last international break, it seems as though ... Read more »

How we met: ‘At the end of the night he kissed me and we became a couple'

Priyanka, 28, and Damiano, 30, met in 2014 when he made a documentary about a library project she’d launched for the homeless community. They now live together in London and ... Read more »

Singaporean singer-songwriter JJ Lin held his first Singapore concert in two years over the weekend (27-28 November) at the Sands Theatre at Marina Bay Sands. The concert on Sunday was ... Read more »

It has been a Welsh rugby weekend where the main concern has been with Cardiff and the Scarlets amid all their problems in South Africa. While Scarlets have been able ... Read more »

Neha Dhupia is having a ‘Men Crush Monday', shares cute pic of husband Angad and son

Neha Dhupia shared a photo featuring her husband Angad Bedi and their son. Neha Dhupia is quite proud of her family. On Monday, November 29, she shared an adorable photo ... Read more »

© GiveMeSport p1flljr6761a9p1da53hr1lad7a9h.jpg Anthony Joshua has stated that he would have to look at stepping down from his rematch with Oleksander Usyk if the money is right. Joshua revealed that if ... Read more »

People should return to wearing masks in all indoor venues, say Labour

Face masks will not be mandatory in pubs and restaurants in England, the government says. (PA) People in England should return to wearing face masks in all indoor settings, including ... Read more »

The Supreme Court Monday asked a petitioner, who was seeking a direction to the Centre to deploy any of the central security force at the 126-year-old Mullaperiyar dam for its ... Read more »

Storm Arwen: homes in north of England without power for third night

Notre-Dame in Paris denies redesign is too radical

Here's Everything Coming To Disney+ In The UK In December 2021