Emma Raducanu has just two official tour-level events on her schedule before the end of the season. The 18-year-old recently made history as the first-ever qualifier to win a Grand Slam at the US Open, seeing her ranking skyrocket from world No 150 to No 24. Ahead of her first full season on the pro tour, the Brit can boost her ranking even more before heading into off-season.

Raducanu is set to play the Transylvania Open in Romania next week.

It will be her first tournament since an early exit in Indian Wells.

The world No 24 lost her first match since winning the US Open when she faced world No 100 Aliaksandra Sasnovich in the Californian desert, and later pulled out of this week’s Kremlin Cup in Moscow, citing a change in schedule.

It leaves just two more official WTA events in her calendar before the end of the year, giving her the chance to rack up more ranking points and potentially start next season at a career-high.

JUST IN: Novak Djokovic rival says he will have vaccine to play Australian Open 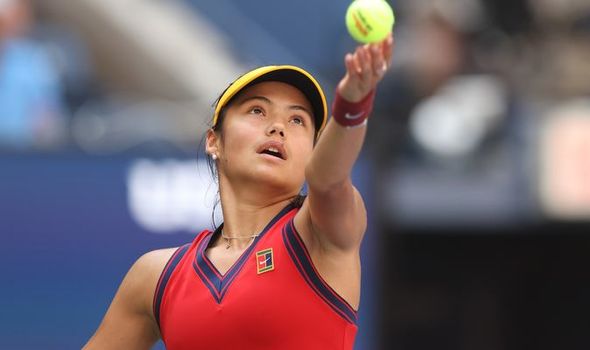 The Bromley local will be playing in her father’s home country next week, as she is set to compete in the WTA 250 event in Cluj-Napoca alongside the likes of her idol and former world No 1 Simona Halep.

Current sitting at world No 24 with 2568 ranking points, if Raducanu can make it all the way to the title she will leave Romania with 2818, potentially pushing her into the top 20 for the first time in her career, dependent on the other players around her.

She is also entered into the Upper Austria Ladies Linz, another WTA 250 event beginning on November 6.

Were Raducanu to win both titles, she would end the year on 3068 ranking points and potentially climb into the top 15, putting her in place for a top 16 seed spot at January’s Australian Open, guaranteeing her an easier draw in the earlier rounds.

Andy Murray might not get Paris Masters wildcard after latest loss

Andy Murray slams his mentality and attitude in loss to Schwartzman

Even if she is unable to go the distance in both events, with the chance to pick up a total of 500 points across the two tournaments, even a few wins can help her boost her ranking slightly and, more importantly, give her confidence as she begins off-season training in preparation for her first full year on tour.

Ending the year on a positive note will be crucial for the 18-year-old, who is currently struggling to find a full-time coach after parting ways with Andrew Richardson following her US Open victory.

Raducanu is looking for a coach with more tour-level experience to guide her as she navigates life on the pro tour, and getting some match wins under her belt to cap off a historic breakthrough season will give her belief going into the off-season.

The US Open champion is currently undergoing a trial period with Esteban Carril, former coach of fellow Brit Johanna Konta. 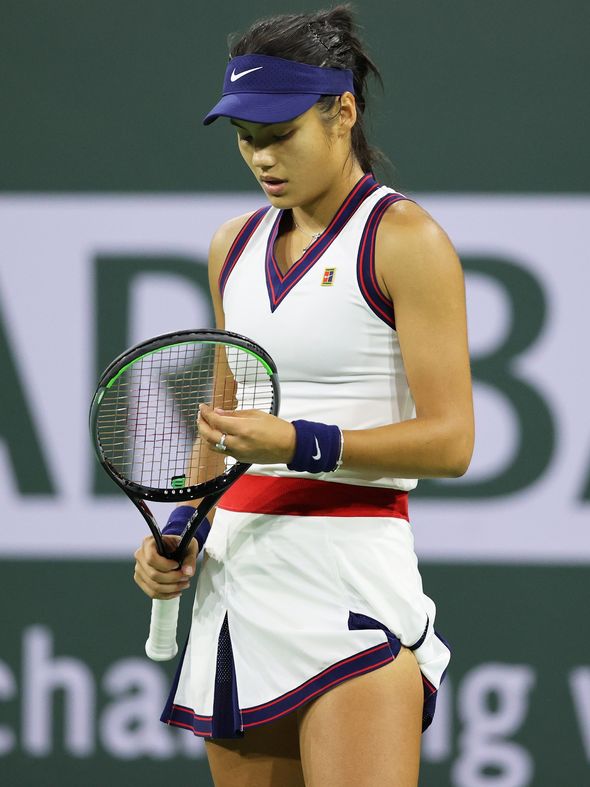 The Spaniard helped Konta rise from outside the world’s top 100 into the top 10, and worked with her when she made a surprise maiden Grand Slam semi-final at the 2016 Australian Open.

Carril is also no stranger to Raducanu – he has worked closely with the LTA and even gave the Bromley teenager some pointers on improving her serve when she trained last year.

If the pair have a successful trial period in Transylvania and Linz, Raducanu could have one less thing to worry about if she decides to appoint the Spaniard full-time, and can start her off-season with a coach she knows will be around for longer.

While she can’t boost her ranking at the events, the world No 24 is also currently entered into two exhibitions which will give her a couple more chances to test herself in a match at the Champions Tennis event in London’s Royal Albert Hall, and at the Mubadala World Tennis Chapionships against Belinda Bencic, who she beat en route to the US Open title.

‘The time has come' – Should Ipswich Town part company with forward in January? The verdict

Artworks from famous London seafood restaurant go up for auction after it was forced to close by Queen's Crown Estate: Green's oyster bar, owned by Duchess of Cornwall's ex brother-in-law, sells off its painting collection

Video: Gang of men are caught on video spitting at bus full of Jewish teenagers celebrating first night of Hanukkah in Oxford Street

The Prime Minister is ignoring his own scientific advisers by putting in place less stringent travel restrictions in response to the new Covid variant, the SNP’s Westminster leader claimed. Speaking ... Read more »

BMW 545e review: this plug-in hybrid 5-Series ticks all the right boxes – yet misses the mark

BMW 545e car The problem with plug-in hybrids (PHEVs) is that they’re all a bit soulless. Cramming in both internal combustion and electric powertrains seems to squeeze all the character ... Read more »

UK economy will grow faster than the EU in 2021 and 2022, says leading economic organisation the OECD as it issues a stark global warning on threat posed by the Omicron Covid variant

A cyclist has tried to ride through security at the Houses of Parliament before being pinned down by police. The man breached security at the gate in front of Westminster ... Read more »

© Provided by Independent Online (IOL) Johannesburg – Not since Ernie Els won his second SA Open title in 1996, has the second oldest national open in all of golf ... Read more »

© PA Images Newcastle United feature in the Mailbox We have a mixed bag of a Mailbox that takes in Newcastle schadenfreude, the Ballon D’Or, women’s football and more. Send ... Read more »

© Provided by Independent Online (IOL) Cape Town – Khama Billiat has undeniably been at the heart of Kaizer Chiefs rejuvenation and has witnessed first-hand the jaunty demeanour of his ... Read more »

For the first time since Jurgen Klopp’s arrival, Liverpool went through a season without beating Everton in 2020/21. The Reds and their supporters will point to several mitigating circumstances, not ... Read more »

© Provided by Daily Mail MailOnline logo Life over the last couple of years has felt particularly hectic for many of us and it can be difficult to take time ... Read more »

The Mariners are finalizing agreement on a four-year extension with reliever Andrés Muñoz that guarantees at least $7.5M, reports Daniel Kramer and Jesse Sanchez of MLB.com (Twitter link). The deal contains ... Read more »

As jury selection began on Tuesday for the Kim Potter trial, a protest outside the Hennepin County Government Center was disrupted as a driver forced their car through the crowd. Read more »

Daunte Wright: Who was the 20-year-old Black man shot dead by police in Minneapolis suburb?

Ralf Rangnick will hold the position as Manchester United’s interim coach till the end of the campaign. SINGAPORE – After a poor start to the season that has left them ... Read more »

Manufacturers revved up their output for the 18th month running in November However, despite the sector growing for months, the rate of expansion slowedSector started to reverse the slow-down in October and did again in November  Read more »

Need gone today! New mum, 20, is left mortified after she accidentally put her BABY up for sale on Facebook marketplace when she tried to sell her old sofa

Lucy Battle, 20, from Burnley, was trying to give away her her old two seater couch when she accidentally included a picture of her seven-month-old son People joked if they could swap  little Oscar for their teenager after seeing postLuckily Lucy saw the funny side, despite admitting she was embarrassed and even managed to shift the sofa Read more »

Video: 'Time to think about mandatory vaccination' across the ENTIRE EU, Ursula von der Leyen warns after Austria and Germany announced plans to force jabs on all adults

EXCLUSIVE: Intriguing twist in case of Kristina Keneally's policeman son who falsely accused a 'justice warrior' of threatening to KILL a cop - as powerful corruption watchdog takes over probe and his ex-premier mother stays silent

Labor senator and former NSW premier Kristina Keneally's son Daniel is a copDaniel Keneally, 23, has been accused of fabricating a statement against a manConstable Keneally accused Luke Moore of making threats against a detectiveMr Moore recorded the pair's conversation and no such threats were ever madeCharges against Mr Moore were dropped and he was awarded $29,000 in costsMr Moore, 34, has now received an apology on behalf of the NSW Police Force  Read more »

What HAS happened to Meghan and Harry's £18m Spotify podcast deal? Royal couple have produced NO content in 2021 despite promising shows that would 'build community through shared experiences and values'

Video: Tests and masks for Christmas parties? Sajid Javid says he would take a lateral flow and wear a face covering at a festive bash - as venues blame 'chilling' messaging for cancellations

Video: Michigan cops remove ARMFULS of weapons from Michigan high school shooter's home as it's revealed the 'bullied' 15-year-old stole his dad's 9mm to kill three classmates - and is now refusing to co-operate

NASA is set to conducted a spacewalk on Thursday that was cancelled Tuesday due to space debris Astronauts Thomas Marshburn and Kayla Barron will replace a faulty radio communications antenna The announcement to postpone the spacewalk came at 1:01AM ET and the walk was set for 7:15AM ET SpaceX said it had to shift its Starlink satellites around to avoid collision It is not clear if the debris comes from two weeks ago when Russia blew up one of its own satellites  Read more »

Disgraced celebrity chef George Calombaris opens up on his dramatic fall from reality TV judge to 'smelly, toxic poster boy for wage theft' after $7.8millon underpayment scandal: 'I drank a lot, I cried a lot'

Disgraced chef George Calombaris was fined $200,000 for underpaying staffThe 43-year-old's hospitality company MAdE has paid back workers $7.8 millionThe MasterChef host opened up about the dark days of drinking and crying  Read more »

© Photo by Richard Heathcote/Getty Images Arsenal vs. Manchester United. At Old Trafford. Ole is out and Ralf Rangnick is in, but perhaps not on the sidelines this Thursday. The ... Read more »

Carrick not in contact with Rangnick for Arsenal clash

PICTURED: Ralf Rangnick patrols the Old Trafford touchline for the first time as caretaker manager, chatting with John Murtough and Wes Brown on a tour of the stadium after release from quarantine

CDC orders airlines to give names of travelers from 8 countries

Insider's guide: What is the difference between the FIA and FOM?