The US Open champion, who is playing in the homeland of her father Ian for the first time, told local fans she was “proud to be Romanian” before the start of the event. A rise in national Covid levels have seen fans banned from indoor events and Raducanu played the world No.106 in front of around 100 volunteers, officials and media.

But the British No.1 still gave an entertaining performance to win 6-3 6-4 in 90 minutes.

Raducanu, who also answered questions in Romania in her courtside interview, said in English: “It was so good to win a Romanian. It is a shame that there are no fans here but it was great to have all the volunteers who make the tournament possible. I loved playing here against a great opponent.”

Raducanu’s first-round win was her first ever at WTA Tour-level after winning 10 matches at the US Open.

“I think it has taken some time to find my feet,” she admitted. “I don’t think I am the finished product yet.”

It was the British No.1’s second WTA Tour-level win over a Romanian – she beat Sorana Cirstea in straight sets in the third round at Wimbledon. 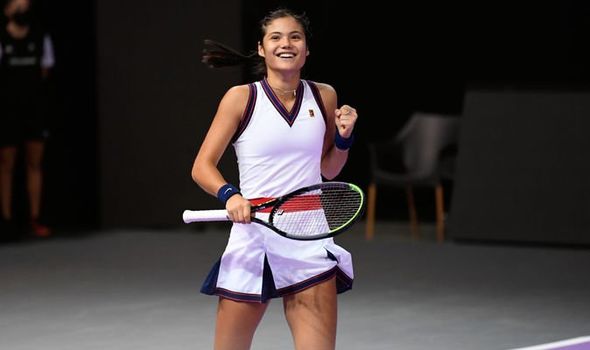 She will face Ukrainian No.6 seed Marta Kostyuk in the quarter-final tomorrow – with former world No.1 Simona Halep her scheduled opponent in the semis.

Raducanu had to save three break points in her opening service game – and then immediately broke Bogdan’s serve to love with a backhand down the line.

She led by the same scoreline in her opening match against Polona Hercog before losing the set.

But the teenager admitted her relief at fighting back to her first WTA Tour-level on Tuesday and she learned from the experience. Raducanu took the first of three set points when Bogdan sent a backhand into the sidelines after 39 minutes. She won 86% of points (19/22) on her first serve.

And she tightened her grip on the match by taking her second break point in the Romanian’s first service game of the second set.

The world No.106 had claimed before their first meeting that Raducanu’s US Open was a “true inspiration”. And Bogdan finally rose to the occasion by taking her fourth break point of the match to draw level at 2-2 when Raducanu sent a backhand long. Raducanu failed to taker an immediate breakback point when she missed with an ambitious service return and

Bodgan began to find her range with her blistering backhand. 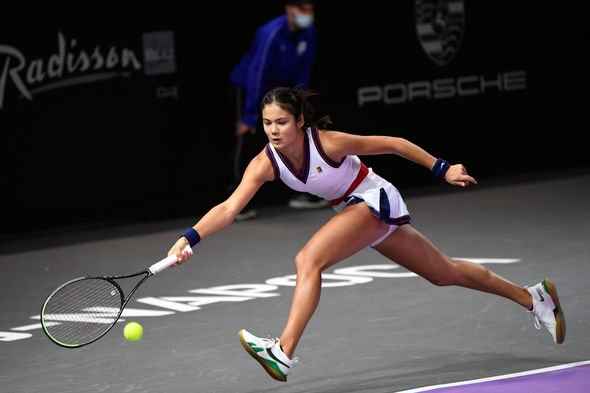 But the Romanian did not get a home call at 0-15 at 3-3 when she stopped playing when she thought a Raducanu forehand had gone long. She motioned to French umpire Kader Nouni the ball was a foot out and told him: “No, you are joking me! It was like this far out.”

Raducanu believed Bogdan’s subsequent ace should have been called out but she took her third break point with a crushing backhand to take a crucial game.

And the Bromley teenager served out the match in clinical style when Bogdan sent a backhand return long.

Pfizer and Moderna set to adapt to Omicron COVID variant

Russia: Survivor found after Siberia mine disaster kills more than 50

COP26 included trillions of dollars in promises. Here's what's next

Kirsty Gallacher GB News presenter Kirsty Gallacher has stepped down from her role at the channel because of a tumour in her ear. The broadcaster, 45, who co-hosts Great British ... Read more »

The spread of the Omicron strain of COVID-19 in Africa caused health officials to urge caution. Officials say PCR tests should be able to detect the variant. Read more »

Shares in Boris Johnson have been selling fast at the Tory end of the Commons tea room. By the end of the week the PM’s stock among his own MPs ... Read more »

The skarrel is real: How the homeless are forced to eke out a living on Cape Town's streets

Skarreling, as Carlos Mesquita from the Rehoming Collective explains, is ‘whatever activity a homeless person decides upon to earn his or her keep’. © Copyright (c) Daily Maverick , All ... Read more »

Puppet or patriot? The legacy of Jose P. Laurel

© Bereitgestellt von Blick TURIN, ITALY – NOVEMBER 27: Joakim Maehle of Atalanta BC battles for possession with Juan Cuadrado of Juventus during the Serie A match between Juventus and ... Read more »

Marvel Studios' Eternals To Debut On Disney+ In Jan 2022

© Provided by Geek Culture It’s been less than a full month since Marvel Studios’Eternals hit theatres all over the world, but the superhero movie has already received a premiere ... Read more »

Ludhiana | Man in woman's garb shoots at 2 men in Khanna

© Provided by Hindustan Times The victims had stopped by the roadside near Ludhiana’s Alaur village in Khanna for tea, when a bike-borne man in women’s clothes opened fire on ... Read more »

© Provided by Hindustan Times Swarn Singh — an ETT qualified teacher posted at a primary school in Barnala — atop a mobile tower at the Punjab MLA Hostel in ... Read more »

© Provided by The Times of India MUMBAI: The Maharashtra government on Saturday issued new rules making full vaccination — 14 days since the second dose — mandatory to board ... Read more »

Omar demands Amir Magray's body be handed over to his family

Chandigarh: Another theft from parked car after smashing glass

© Provided by Hindustan Times This is eighth such incident reported in Chandigarh in the past one month wherein thieves fled with items kept in a car after smashing its ... Read more »

Chandigarh: A mix of urban, rural woes in Ward 21

Education must to get rid of joblessness: Haryana governor Dattatreya

NASHVILLE, Tenn. (AP) — A shooting in a Tennessee apartment has left three people dead and four others wounded, police said. The shooting occurred Friday night in an apartment in ... Read more »

Healthcare worker collects a swab for a Covid PCR test at Tambo International Airport in Johannesburg (REUTERS) The new Covid variant found in parts of southern Africa has been designated ... Read more »

What you need to know about the Omicron COVID variant

The discovery of a new COVID-19 variant in South Africa this week caused alarm and swift action from a number of countries including travel restrictions. Here’s what you need to ... Read more »

The US State Department on Saturday formally warned Americans against traveling to South Africa and seven of its neighbors for fear of the new COVID-19 Omicron variant. The Level 4 ... Read more »

STRICTLY Come Dancing fans were left hot under the collar as they called AJ Odudu and Kai Widdrington's routine tonight the sexiest in the show's HISTORY. It comes just days ... Read more »

© Provided by Pinkvilla Andrew Garfield has recently opened up on his reunion with Tom Holland at GQ’s Men of the Year Party. During an interview on Nova’s Smallzy’s Surgery ... Read more »

© ITV/Shutterstock Simon-Gregson.jpg I’m a Celebrity fans tuning in for this weekend’s episodes will be very disappointed On Friday (25 November), the first live show of this year’s series was ... Read more »

Omicron: How the return of PCR tests and self-isolation for international travel will work

PCR tests are back for travellers arriving in the UK. Weeks after rules were eased to allow cheaper and faster lateral flow (antigen) tests, the government has tightened the rules ... Read more »

Three people were killed as Storm Arwen brought winds of nearly 100mph and heavy snow to the UK, tearing down trees, damaging buildings and leaving more than 150,000 homes without ... Read more »

Boris Johnson has expressed “absolute confidence” that people would enjoy a better Christmas this year than last, despite re-imposing a range of restrictions – including compulsory mask-wearing – to combat ... Read more »

Lumberton man charged with murder in connection with triple homicide

Nov. 27—LUMBERTON — A Lumberton man has been charged with murder in connection with the deaths of three men on Friday. Dekota Ray Locklear, 23, of Lumberton, was charged with ... Read more »

Whitley Bay in Northumberland experienced some snowfall (Rory Peace/PA) (PA Media) A man has died and travel plans have been severely disrupted as Storm Arwen battered the UK. Motorists were ... Read more »

© Provided by Hindustan Times Punjab CM Channi exhorted the gathering at a rally in Barnala to make sure that parties like the SAD and the AAP were wiped put from ... Read more »

'Nobody' in Biden's West Wing is shutting down chatter of Buttigieg as a potential presidential successor: report

Omicron variant: Biden makes fresh plea to Americans to get vaccinated as he puts travel restrictions on eight countries