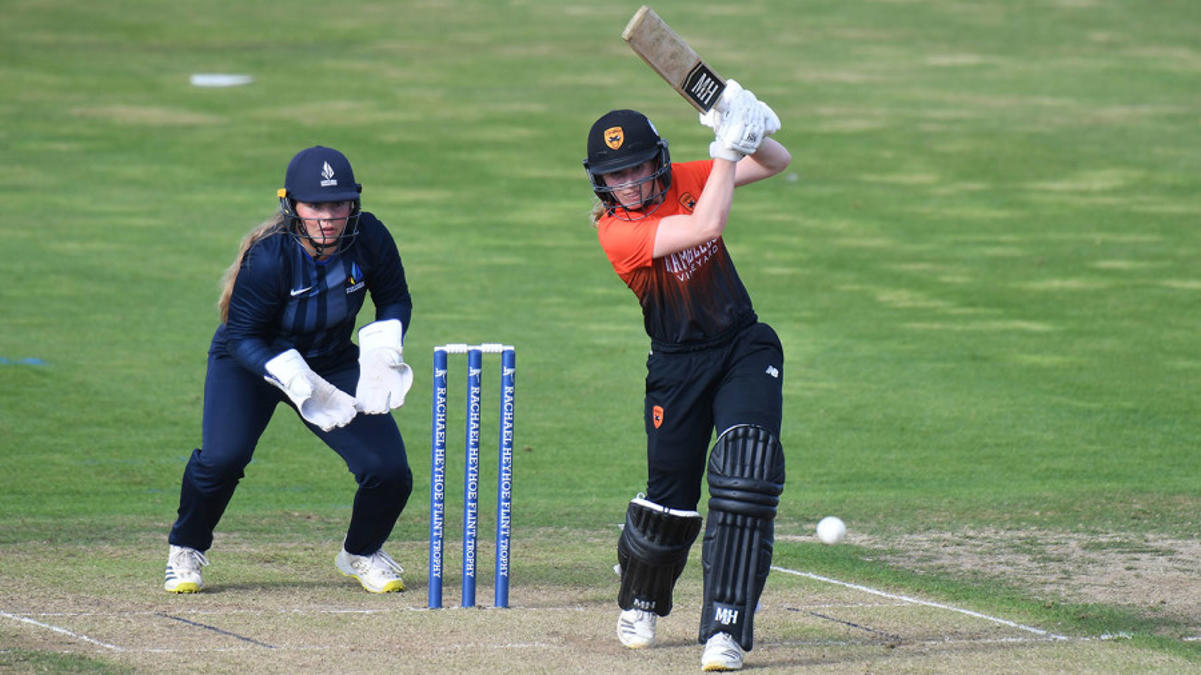 However, Portsmouth-born Windsor scored an unbeaten 47 and Norris – who had earlier returned 2 for 36 – was 40 not out to trump the Diamonds with an unbeaten stand of 78 as the reigning champions sneaked home by three wickets with two balls to spare.

All this came after Ami Campbell’s 60 – her second half-century in four days – dragged Diamonds from 116 for 8 to 183 all out, Vipers captain Georgia Adams taking 4 for 35.

It meant more heartbreak for Diamonds, who lost to Vipers in last year’s final and who were bridesmaids at the Charlotte Edwards Cup showpiece earlier this month.

Diamonds sent Linsey Smith in to open, but hopes that she would pinch-hit proved unfounded, though Hollie Armitage was first to go, bowled by Paige Scholfield.

Smith limped to 31 from 65 balls before becoming the first of Adams’s victims, sparking a collapse where three wickets fell for a single.

Bess Heath struck the first boundary for 11 overs before Norris trapped her lbw, replays suggesting the ball pitched outside leg stump. Another collapse followed, four wickets tumbling for four runs, and at 116 for 8 Diamonds were in dire straits.

Campbell though refused to go quietly, striking four boundaries to reach 50 in 63 balls and by the time she holed out in the final over the last two wickets had mustered 67.

Their total of 183 looked worth more when Beth Langston bowled Adams and Ella McCaughan, both for nought, to leave Vipers 6 for 2.

Maia Bouchier, released from the England squad to play in the final, struck the game’s first six – an effortless pull over square leg – but Phoebe Graham removed Georgia Elwiss caught behind.

Bouchier forged on, taking two fours from one Graham over only be stumped by Heath off the spin of Levick, who in company with Smith slowed the run chase to a crawl.

But Norris saved the hat-trick and so began the match-winning stand.

“A dramatic game of cricket with a lot of ups and downs,” Norris said. “I thought we bowled really well at the start and we knew it was an achievable total to chase down.

“When I walked out I just said to Winny [Windsor] ‘we’ve got to take it deep, if we bat the 50 overs we win the game’. So it was about holding our nerve just that little bit longer, playing our usual cricket, nothing high risk. I guess it was just pure desire.”

Gunn said: “I don’t really think it should have got that close with just two balls left and that just shows how well we bowled, but also it’s annoying they had a 78-run partnership at the end.

“It’s frustrating to not win a final, but what can you do? That’s cricket and why we play sport. It’s not as if we didn’t give it everything, I’m proud of all the girls.”

'Fear TWD' showrunners talk Victor's darker turn, confirm we'll see Alicia again soon, and tell us whether or not you should give up hope on a potential Madison return

© Provided by Khaleej Times Covid-19: Melbourne to ease world’s longest lockdowns Melbourne, which has spent more time under Covid-19 lockdowns than any other city in the world, is set ... Read more »

Om Puri Birth Anniversary 2021: Memorable Movies of the Actor That Prove his Versatility

© Provided by News18 A thespian like Om Puri is a rare gem in the Indian film industry. One of the pillars of the Indian new wave cinema, Puri’s role ... Read more »

Manchester United’s Nemanja Matic has spoken after their defeat to Leicester City on Saturday with as a huge game against Liverpool looms. Jurgen Klopp’s side travel to Old Trafford next ... Read more »

Washington D.C.’s Metro pulled more than half of its railcars Sunday night after the National Transportation Safety Board investigation found multiple axels out of compliance with manufacturing specifications. © Greg ... Read more »

Before Tarunima Sinha moved to the UK in 2000 to get married, she had only ever eaten two types of cake. They were made by the bakery in her village ... Read more »

© Provided by Fansided According to ESPN MLB insider Jeff Passan, MLB will finally provide housing for minor league players. On Sunday, a report was released that noted MLB is ... Read more »

US: 3 dead after knife attack on Arkansas officer

US: 3 dead after knife attack on Arkansas officer Police in Arkansas said Sunday that three people were dead after an incident in which an officer fired his weapon while ... Read more »

Cancer, Leo and Aquarius ascendant sign people are advised to be cautious on the health front and take appropriate care of themselves. Read your daily predictions to know the possibilities ... Read more »

© Provided by Hindustan Times NDRF personnel and other teams have been carrying out search and rescue operations at flood-affected area in Kottayam. (ANI Photo) At least 24 people have ... Read more »

© Provided by DNA Demanding the removal of Ajay Mishra ‘Teni’, the Union Minister of State (MoS) for Home Affairs, from the Union Cabinet over the Lakhimpur Kheri incident, the ... Read more »

© Provided by Daily Mail MailOnline logo  Universities have ‘three weeks to save term’, lecturers are warning as they threaten to strike in a fresh blow to long-suffering students. The ... Read more »

President Joe Biden delivers remarks at the dedication of the Dodd Center for Human Rights at the University of Connecticut in Storrs, Connecticut, October 15, 2021. REUTERS/Leah Millis President Biden ... Read more »

The dark web is rising

© Provided by The Edge KUALA LUMPUR (Oct 18): Cybercriminals have been having a field day since the start of the pandemic as private and public institutions scrambled to cope ... Read more »

From oil to renewables, winds of change blow on Scottish islands

© ADRIAN DENNIS As Shetland turns to renewable energy, wind turbines are part of the island’s new priorities In the far north of the United Kingdom, where the wind blows ... Read more »

© Provided by Singapore Business Review Fitch Solutions has revised its growth forecast for Singapore to 6.3% from 6.1%, following the expansion of GDP by 6.5% year-on-year (YoY) seasonally adjusted ... Read more »

© Provided by Dot Esports The PUBG Mobile Global Championship (PMGC) 2021 will feature 40 teams from around the globe competing for the title of world champions and a share ... Read more »

Cleo, 4, went missing from her family's tent in the early morning. It's been more than 48 hours.

Corruption at the top? Gladys Berejiklian faces her ICAC moment of truth

Did former NSW premier Gladys Berejiklian facilitate the potential misuse of $35 million of public money to help the electoral prospects of former boyfriend Daryl Maguire? And if so, was ... Read more »

(Reuters) – Goldman Sachs said on Sunday it received an approval from China’s securities regulator to take full control of its mainland securities business. © Reuters/David Gray The logo of ... Read more »

A jealous husband choked his wife to death and set up a false search for her in a bid to rule himself out as a suspect, it is reported. © ... Read more »

© Provided by Fansided Joc Pederson welcomes the Los Angeles Dodgers to Joctober, pearls and all. Joc Pederson gets sweet revenge on his former team by obliterating this poor baseball ... Read more »

Decorated horse trainer Gai Waterhouse has lashed critics of jumps racing as she pushes to overturn a decision to scrap the controversial practice in South Australia, insisting that horses “love to do ... Read more »

Restrictions remain in Tasmania despite lockdown exit this evening

Tasmania’s lockdown for the 12 LGAs in the state’s south will end at 6pm tonight, Premier Peter Gutwein has announced. Mask wearing will still be mandatory both indoors and outdoors ... Read more »

The Philippines has improved its ranking the the latest edition of the Peddling Peril Index (PPI), the Trade department said on Sunday, moving up to 49th out of 200 countries ... Read more »

Cameron Norrie won the biggest title of his career in Indian Wells. The world No 26 came from a set and a break down to defeat Nikoloz Basilashvili 3-6 6-4 ... Read more »

© Provided by The Financial Express And, given RBI’s gigantic war chest—over $575 billion of foreign currency assets, plus a further $50 billion or so of forward purchases—it should be ... Read more »

© Erik Anderson/AAP PHOTOS Melbourne’s pubs can open for 20 fully vaccinated customers indoors, and 50 outdoors, from Friday. Businesses and councils can apply for a share in a $54.5 ... Read more »

© Provided by Zee News All-rounder Hardik Pandya’s form and few batting slots will be foremost on captain Virat Kohli’s mind as India look to make the most of two ... Read more »

© Provided by The Financial Express As of now, the capex trends are nothing to write home about and one would need to see a smart pick up in the ... Read more »

© Provided by DNA During lockdown, instances of cybercrime such as online frauds have significantly risen. Over 2.7 crore adults have been targets of identity theft in the last year ... Read more »

How To Go About Digitising Your Business?

Honeywell in talks with landfill operators, recyclers in Southeast Asia

Alex Murdaugh allegedly ‘coordinated' deal with housekeeper's family to sue himself after her death, then kept money: warrant

Rohit Roy feels he hasn't got his due: ‘I am not an insider, I don't get a hundred chances after my film flops'

CFMMEU election above board, court rules

Group of 16 Americans and a Canadian Kidnapped in Haiti