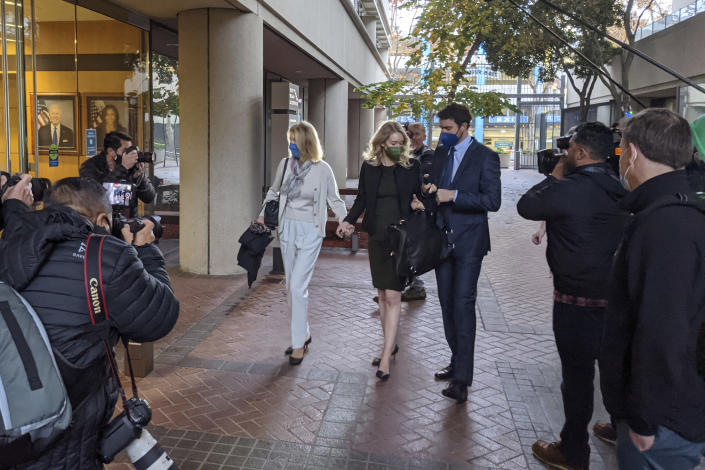 Holmes, 37, has pleaded not guilty to charges of defrauding investors and patients by failing to deliver on her promise to revolutionize health care with a technology that was supposed to be able to detect a wide range of diseases and other problems by testing just a few drops of blood.

She is charged with two counts of conspiracy to commit wire fraud and nine counts of wire fraud, which carry a maximum prison sentence of 20 years.

Her defense team has described her as a tireless worker who poured more than 15 years of her life into the pursuit of a faster, cheaper and less invasive way to test blood samples and screen for disease.

But federal prosecutors painted her in a darker light, depicting her as a conniving entrepreneur who duped investors, customers and patients for years, even though she knew Theranos was nearly bankrupt and its much-hyped blood-testing technology was a flop.

Her trial is nearing its end after months of detailed testimony from former investors, Theranos employees and Holmes herself. Prosecutors and defense attorneys have alternatively described her as a greedy villain who faked her way to the top and as a passionate underdog and victim of abuse who spent years trying to shake up the health care industry.

Her former lover and business partner Ramesh “Sunny” Balwani, whom Holmes has accused of emotional and sexual abuse, has been banned from attending her trial but faces his own early next year. His lawyer has vehemently denied the abuse accusations.

Video game giants Call of Duty and World of Warcraft have a new home: Microsoft. On Tuesday, Microsoft announced it will acquire Activision Blizzard, the publisher behind Call of Duty, ... Read more »

Microsoft to buy gaming company Activision Blizzard in a deal valued at $68.7 billion

Could popular Android phone maker OnePlus be working on a gaming smartphone? That’s what a new rumor suggests, and it comes from a pretty compelling source. Digital Chat Station is ... Read more »

— Recommendations are independently chosen by Reviewed’s editors. Purchases you make through our links may earn us a commission. When it’s freezing and snowy outside, it’s perfectly natural to want ... Read more »

Do you need an SSD for your PS4 or PS4 Pro? Probably. SSD, which stands for solid-state storage, is a fast drive that’s almost always used in gaming PCs, and ... Read more »

Automated driving is still far from a reality in China, according to a new study of assisted driving systems of mainstream electric vehicles sold in the country, pouring cold water ... Read more »

Neural Noise Shows the Uncertainty of Our Memories

World's plastic pollution threat is a 'planetary emergency' equal to climate change and a global treaty will be needed to fight the crisis, damning report warns