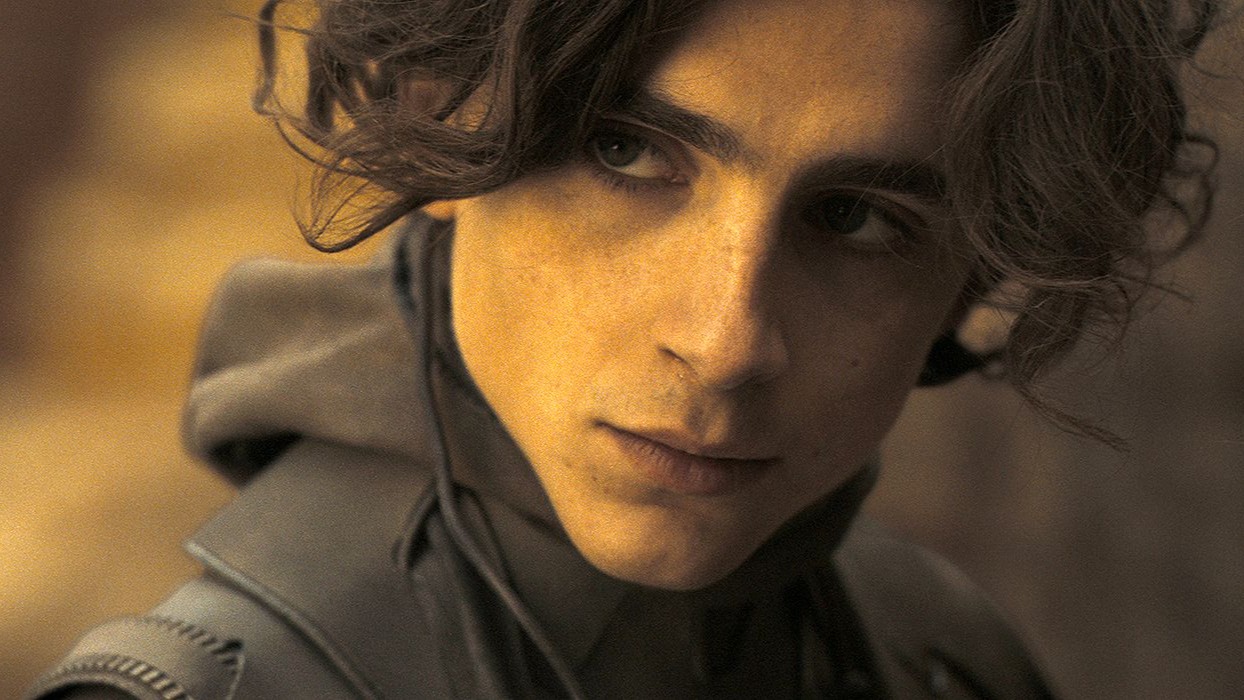 As you’ll likely have heard by now, Denis Villeneuve’s Dune comes to a rather abrupt end.

It was always known that the director would shoot his thunderous adaptation of Frank Herbert’s sci-fi novel in two parts. But seeing this lack of finality – and arguably, drama – play out in the duology’s introductory instalment might come off as disappointing, especially to those who had looked forward to Dune with inevitably ill-fated levels of expectation.

By the same token, though, there is no other way I, for one, would rather have seen Villeneuve tell this tale. To those unfamiliar with the source material, which the director so meticulously adheres to throughout the film’s 150-minute runtime, Dune is an intimidatingly dense story of familial upheaval, political tension and theological prophecy. In practical terms, that means it’s a 20-hour audiobook, or a novel you probably wouldn’t get around to finishing on a week-long holiday.

As such, Villeneuve only agreed to dramatize his version of Dune if he was permitted to do so across two films – with the first laying the groundwork for a more comprehensible, exciting second. By necessity, then, Dune: Part One occasionally suffers under the weight of its expository responsibility.

But Villeneuve knows this. He loves this material like a Bible, and does exceptionally well to delve into Herbert’s complex lore and religious ramblings in a way that never seems inaccessible. Soundtrack and sandworms aside, Dune is far from standard blockbuster fare, and though its lack of dramatic tension means it isn’t the standalone sci-fi spectacular many expected it to be, the director uses a particular plot device to hint that Dune: Part 2 will deliver on that promise – Paul’s dreams. 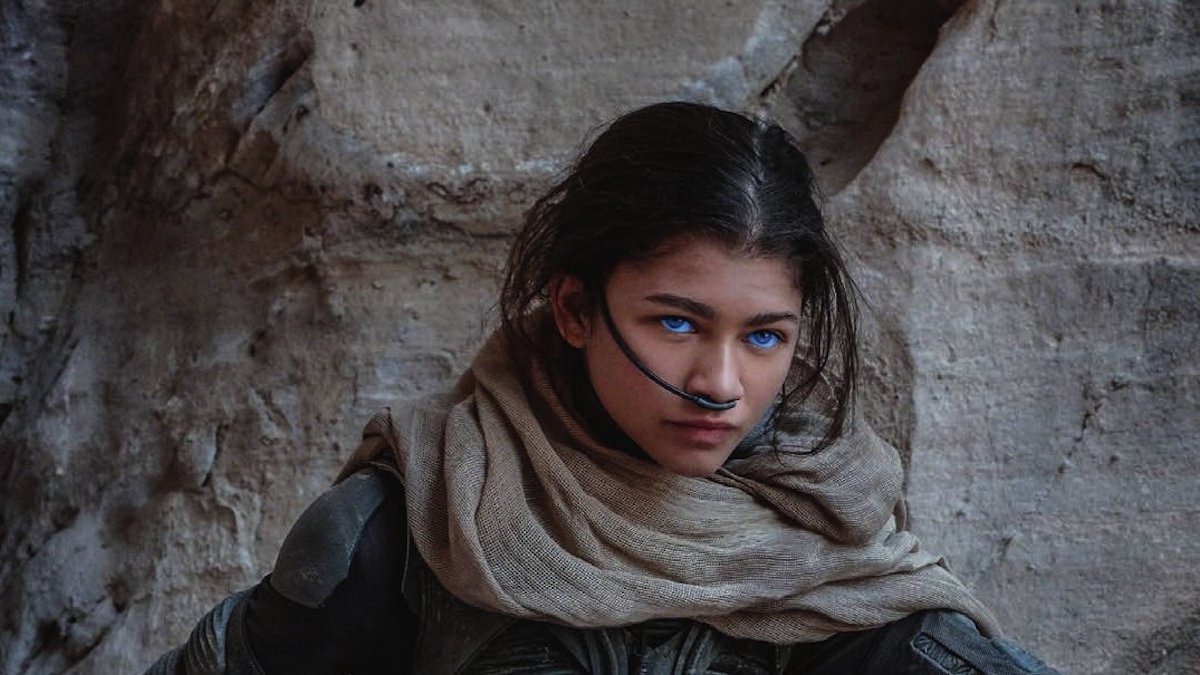 Villeneuve not only employs his protagonist’s (perhaps overly frequent) visions as a narrative tool throughout the film – proof of Paul’s role as the messianic “Muad’Dib” – but also as a means of teasing Dune’s sequel. He dangles the most exciting parts of Herbert’s novel in front of his audience while acknowledging that he’s not yet able to showcase these sequences this early in the story.

In such moments, Villeneuve is basically saying, “Look, guys, this is the movie you thought you were about to see, but come back in two years and you’ll get it.”

And you know what? That’s actually okay. Sure, it was frustrating to discover that certain dramatic set-pieces teased in the trailers (the giant desert battle, for instance) remain teases (read: visions) in the film itself, but at least they’re evidence that Villeneuve’s hyper-faithful adaptation will crank up the action in an as-yet-uncommissioned follow-up.

Paul’s dreams are my dreams for what Villeneuve’s Dune would turn out to be when he attached himself to the project back in 2016. And since they prophesize the events of its sequel, almost as if the director has already shot it, I am more than happy to stomach the abrupt half time whistle and look forward to Dune: Part 2 with anticipation equal to the first. 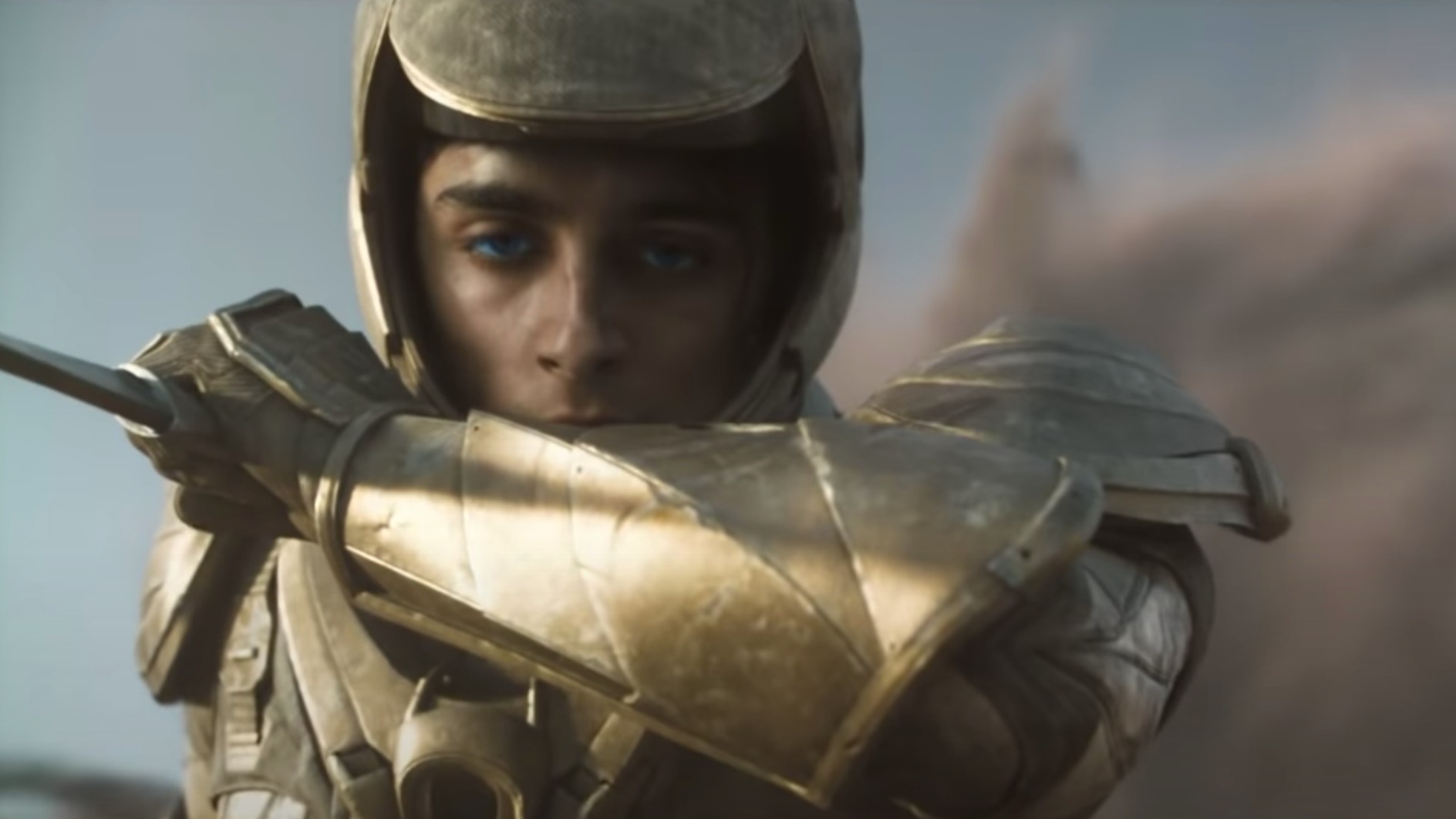 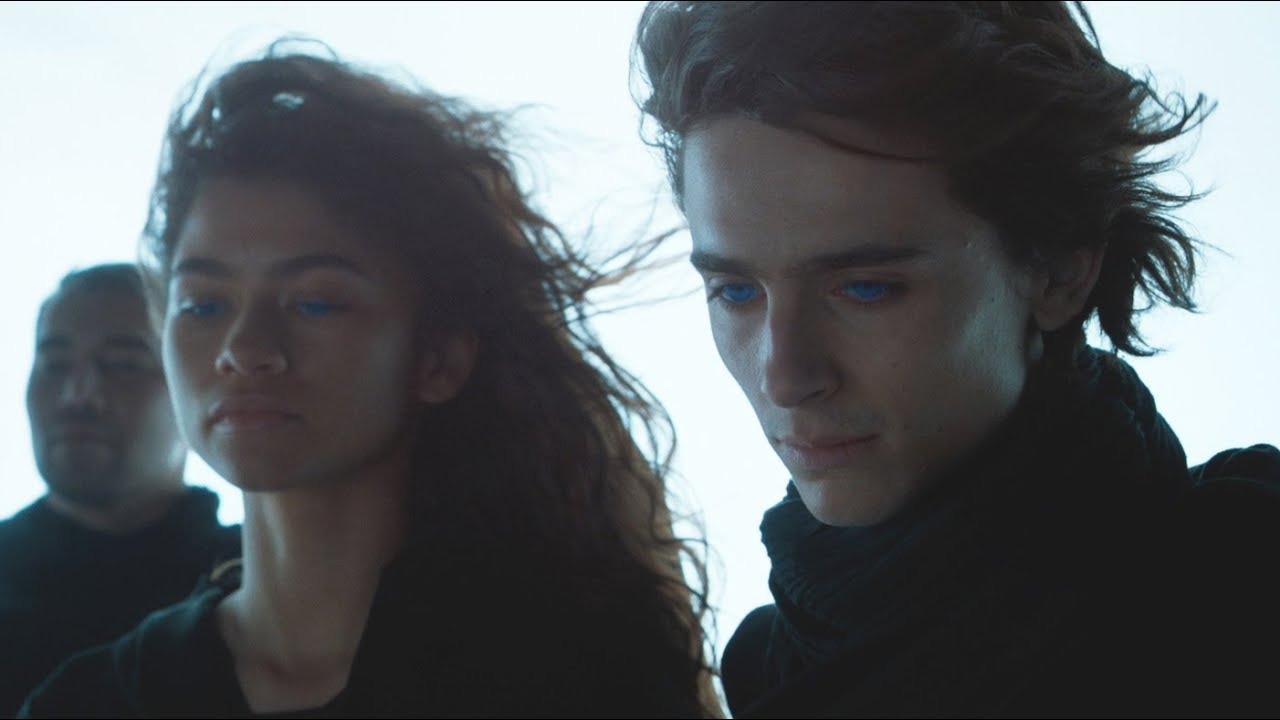 It’s difficult to know whether the effect of these cinematic breadcrumbs is the same to those unfamiliar with the rest of the novel’s story. I watched the movie with friends who were (and still are) entirely unaware of how Dune plays out in its entirety, so it’s no surprise that some felt cheated by Villeneuve’s unapologetic halting of proceedings.

Perhaps if Dune was more obviously marketed as Part 1 of a two-part story, those cinemagoers who hadn’t immersed themselves in its press tour prior to viewing might not feel so short-changed by its lack of finality.

But Jason Momoa’s Duncan Idaho offers a telling epigram for the director’s hopes of a sequel early on in the movie. His line “dreams make good stories” is intended to ease Paul’s mind, though it also rather sums up Villeneuve’s approach to hooking his audience on an even better film he can’t yet make.

It’s Zendaya’s Chani, however, who gets the most unmistakably direct (and very last) piece of dialogue in Dune’s two-and-a-half-hour runtime. “This is only the beginning,” she tells us – which is absolutely true of this sprawling story, and hopefully Villeneuve’s stewardship of it.

Dune is now streaming on HBO Max in the US

Netflix has bolstered its slate of Oscar short hopefuls with the acquisition of “Three Songs for Benazir.” Directed by Gulistan and Elizabeth Mirzaei, the 22-minute docu tells the story of ... Read more »

The government on Friday said it is cognizant of the importance of semiconductor design and has a budgetary allocation of Rs 100 crore for chip design related programmes the ongoing ... Read more »

Jon Fitton/Shutterstock There’s no doubt that the UK’s railways have been hit hard by the pandemic. Recent figures from the Office of Rail and Road show a huge drop in ... Read more »

In each of the past three years, the number of ransomware attacks increased by almost a third over the holiday season as compared to the monthly average, new data from ... Read more »

We’ve been warning you all for the past few weeks, but Christmas has well and truly arrived on streamers in 2021. This weekend will see several new festive movies and ... Read more »

Just as the curtain falls on Amazon Web Services’ re:Invent 2021 event, Google Cloud has announced a series of new cloud regions, not just in the US, but around the ... Read more »

Microsoft has changed the way Windows 11 handles switching default web browsers, thankfully, reversing an unpopular decision it made when the OS was still in pre-release testing (back in August). ... Read more »

The development of the Moderna (MRNA) coronavirus vaccine relied on it. The early discovery and modeling of COVID-19 outbreaks depended on it. And new drugs for the disease benefited from ... Read more »

Ameca is billed as the "world's most advanced human shaped robot". CEO of Engineered Arts Will Jackson says the machine could take someone's place in a meeting, and costs more than £100,000. Read more »

Tesla will recall more than 20,000 of its bestselling made-in-China Model Y sport-utility vehicles (SUVs) to fix a steering issue. The US electric vehicle (EV) giant will recall 21,599 Model ... Read more »

Instead of having a one-size-fits-all approach, developers could, researchers suggest, tailor make vaccines according to a person's infection history. Read more »

China is forging a new identity for Macau, the world’s largest casino den, as a regional technology hub, according to Chinese technology industry executives and officials. As the former Portuguese ... Read more »

Hey Google, here's a blueprint for a Pixel smartwatch to rival the Apple Watch

The cat’s out of the bag, once more. After a few years of silence, we are again seeing reports about Google working on its own Pixel-branded smartwatch. We just know ... Read more »

Day five of the trial of British socialite Ghislaine Maxwell starts in New York City, as the 59-year-old answers to charges related to her alleged involvement in financier Jeffrey Epstein’s ... Read more »

Need a doctor? Google can now help you find places that accept your health insurance

Looking for a new doctor who takes your health insurance? An update to Google search might make that easier. Google announced updates to search results providing more information on doctors, ... Read more »

Alcohol, anorexia and chronic colloidal silver ingestion revealed as cause of death in mummified Love Has Won cult leader

The autopsy report of Colorado cult leader Amy Carlson aka “Mother God” has revealed that the leader of religious group Love Has Won died due to a history of alcohol ... Read more »

Want to trade in your smartphone? Take these steps first: Talking Tech podcast

Watch: Little Mix 'taking break' after Confetti tour next year Little Mix have opened up on the “terribly emotional” decision to take a hiatus from the performing. This week saw ... Read more »

Omicron: Britain plans to vaccinate 25 million in two months – but can it be done?

What impact the new omicron variant will have is still unknown. But with early data suggesting it could be the most transmissible form of the virus yet – and that ... Read more »

Chinese smartphone giant Oppo has announced the schedule of its annual ’Oppo Inno Day’ through a press release, which will be held on December 14 and 15 this year in ... Read more »

A brief VPN outage has led to the arrest of a former Ubiquiti developer, who has reportedly been charged with stealing data and trying to extort his employer while pretending ... Read more »

AMD is rumored to have a pair of wallet-friendly graphics cards in the pipeline, and the latest speculation has floated release dates for the RX 6500 XT and RX 6400 ... Read more »

How to add a widget to your Mac in macOS Monterey

The release of macOS Monterey has brought an impressive list of new features for users to enjoy. In this guide, we’ll be focusing on widgets, a feature that’s seen a ... Read more »

The Samsung Galaxy S21 FE is expected to finally make its debut next month, and according to the latest rumor, it’s going to go on sale at the same price ... Read more »

Huawei could launch HarmonyOS for global customers next year: Report

Chinese technology company Huawei has seen its share of trouble globally but in the native market, the company is still a big player. The company’s own HarmonyOS, which has been ... Read more »

Scientists Have Found The Two Most Effective Covid Booster Jabs

(Photo: Yui Mok – PA Images via Getty Images) The Pfizer and Moderna vaccines are the most effective Covid booster jabs. a new study has found, but all boosters could ... Read more »

Billionaire Mukesh Ambani on Friday backed the proposed data privacy and cryptocurrency bills, saying India is putting in place the most forward-looking policies and regulations.Ambani, who has been a votary ... Read more »

For the past few decades, it was assumed that rising startups would opt for exact brand match domain names ending in the legacy top-level domain (TLD) .com as soon as ... Read more »

Indian doctor with no travel history tests positive for omicron: ‘This may be everywhere already'

Samsung Galaxy S20 | Photo credit: Daniel Romero on Unsplash With the possibility of the Samsung Galaxy S21 FE launching in a month, more details about the anticipated mid-range phone have leaked once ... Read more »

The manoeuvre is the latest in a series of incidents in which debris has forced astronauts to respond and comes amid calls for space junk to be regulated. Read more »

Samsung Galaxy A72 | Photo credit: Đức Trịnh on Unsplash Renders allegedly showing the design of the upcoming Galaxy A73 surfaced recently, and it appears that Samsung is not planning a significant redesign. ... Read more »