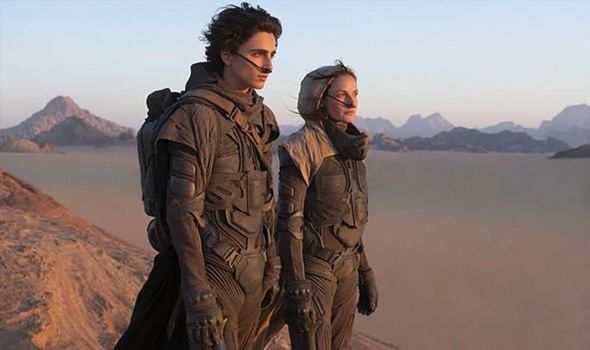 The title on the screen for Denis Villeneuve’s ambitious new adaptation of Herbert’s dense (and some say unfilmable) sci-fi novel, reads Dune: Part One. Whether or not there will be Part Two depends on how many punters will sit through a sombre 155-minute epic that doesn’t have an ending. Thankfully, at least this one manages to correct most of the earlier film’s mistakes.

The plot makes sense, the special effects are stunning, the score is by maestro Hans Zimmer (not cheesy rockers Toto) and we don’t have to suffer the sight of Sting in a codpiece.

Again, most of the action takes place on the commodity-rich planet of Arrakis where gigantic sandworms patrol the desert plains and the Fremen wage guerrilla war on their colonial masters from House Harkonnen.

Now the Emperor has told their fascistic leader Baron Harkonnen (Stellan Skarsgard) to skedaddle and let the nicer folk from House Atreides take over.

Their leader Duke Leto (Oscar Isaac) wants a treaty with the Fremen. But before his benevolent form of colonialism can take root, the bloated Baron launches a surprise attack. 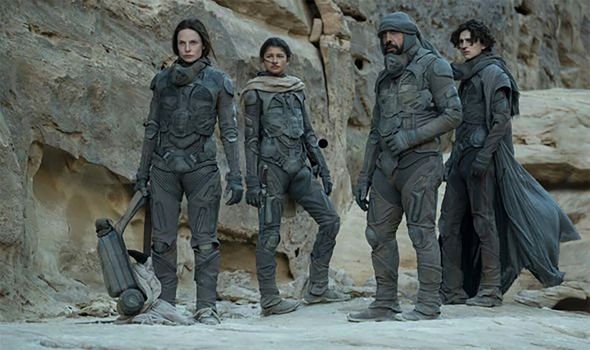 Villeneuve seamlessly blends the political drama with the monster movie and the sci-fi actioner.

But is Paul really “The One”? Hopefully, we’ll find out in Part Two.

Radon levels in new Canadian homes now 467% higher than in homes in Sweden, U of C study finds

Despite months of promising to file an explosive lawsuit that would “pull down” the 2020 presidential election results and reinstate Donald Trump to the White House, pillow-monger Mike Lindell has ... Read more »

Putin is 'deadly serious' about neutralizing Ukraine, and has the upper hand over the West, former US diplomats and officials warn

Russian President Vladimir Putin speaks during a concert marking the seventh anniversary of the Crimea annexation on March 18, 2021 in Moscow, Russia.Mikhail Svetlov/Getty Images The buildup of Russian troops ... Read more »

Why 'Frozen' was a Disney classic 70 years in the making

“Frozen” completed Walt Disney‘s quest of bringing “The Snow Queen” to the big screen. (Images via Getty Images/DisneyStudios) This article is part of Yahoo's 'On This Day' series From “Snow ... Read more »

GENEVA (AP) — The World Cup in Qatar is sure to be without either Italy or Cristiano Ronaldo. Italy and Portugal, the current and previous European champions, were drawn into ... Read more »

The Archbishop of Paris, Michel Aupetit, has offered his resignation to Pope Francis due to his “ambiguous behaviour” with a woman, his diocese announced on Friday. Aupetit wrote to the ... Read more »

(TikTok/ @kidalloy) Thanksgiving didn’t go the way one woman planned after she cooked lots of food, decorated her house and none of her guests showed up or bothered to text. ... Read more »

I’m A Celebrity… Get Me Out Of Here! will be broadcast as a pre-recorded show rather than live as Storm Arwen was set to batter the UK with winds as ... Read more »

Germany ‘at crossroads' as Covid cases surge across Europe

Photograph: Fabrizio Bensch/Reuters Germany’s top health officials have raised the prospect of a national lockdown, warning that a rapidly rising number of coronavirus cases and a dramatic increase in the ... Read more »

Ken Bruce has revealed the BBC used multiple back-up tapes and an extra power generator as a precaution during its broadcast of the Queen’s Christmas message during the 1980s. The ... Read more »

India, Nov. 26 — Krafton has just announced that PUBG: New State received an emergency update yesterday, November 25. As one might expect, the situation was quite serious. According to ... Read more »

Stephen Sondheim, groundbreaking composer who won 6 Tony awards and reshaped musicals, dies at 91, according to report

On Location: November 26, 2021 Catch up on the developing stories making headlines.The Associated Press NEW YORK — Stephen Sondheim, the songwriter who reshaped the American musical theater in the ... Read more »

The Associated PressFILE – Composer and lyricist Stephen Sondheim gestures during a gathering at Tufts University in Medford, Mass., on April 12, 2004. Sondheim, the songwriter who reshaped the American ... Read more »

Popular YouTuber MrBeast has taken the internet by storm with more than 70 million subscribers, but even he was surprised at the incredible reception his recreation of Netflix hit Squid ... Read more »

James Comey's daughter is a lead prosecutor in Ghislaine Maxwell's child sex trafficking case. Here's what we know about her.

Madonna Thanksgiving Madonna/Instagram Madonna with her five children Madonna is spending time with her family this holiday season. The singer, 63, celebrated Thanksgiving on Thursday alongside five of her kids: ... Read more »

‘There is no tolerance yet': Trans woman attacked in Cameroon

A transgender woman was assaulted and humiliated in mid-November in Yaoundé, Cameroon, as shown in videos posted on social networks. Members of the local LGBT community report that they suffer ... Read more »

After Meeting With Victim, Former Missouri Officer Is Cleared of Assault

K3 goes on a theater tour in a new line-up

“It’s not for nothing that we called our new theater show Kom Erbij”, say the current members of K3, Hanne and Marthe. “That way we want to tell the new ... Read more »

Dwayne Johnson has given away his custom truck to a fan for Christmas. On Instagram, Johnson posted a video alongside a lengthy caption explaining why he gave away the vehicle ... Read more »

Stalker bombarded Sophie Ellis-Bextor and her son with nasty messages and packages: ‘Your soul is black'

A 39-year-old man from London has been banned from contact for stalking singer Sophie Ellis-Bextor for months. He bombarded the Murder on the dance floorstar with nasty messages and also ... Read more »

Pirates: Reggie Yates on benefits of COVID during filming

The story, a coming-of-age tale about three friends trying to have a night to remember, is relatively new for Yates, though he's wanted to make a movie for his whole life. Read more »

Do celebrities really all break up peacefully? ‘Not smart to hang dirty laundry outside'

A bomb in showbizland. Katja and Freek are separated. In September Katja posted the last happy photo with Freek on it. But yesterday there was suddenly that post in which ... Read more »

Easy On Me also spends a sixth week topping the singles chart, while she has two more songs fly into the top five. Read more »

Kanye Asks God's Help To Get Kim Kardashian Back, She's Having Fun With Another

Omroep Zwart can be heard from January in the evening program that Giel Beelen makes for BNNVara on NPO Radio 2. This was announced during the membership recruitment marathon of ... Read more »

“I just threw up for the first week and the weeks after I passed out a lot,” she tells RTL Boulevard. She adds: “Maybe too much information, but I still ... Read more »

Whitty worried about whether public would accept new restrictions

New this week: 'Power of the Dog,' 'Annie' live and Kenny G

Diego Sanchez hospitalized with serious case of COVID-19: ‘This has been some trying times'