Duke parted wayswith head football coach David Cutcliffe on Sunday after he spent 14 seasons at the helm, the school announced.

The Blue Devils lost to Miami on Saturday, their eighth consecutive defeat after starting 2021 with a 3-1 record. Trooper Taylor will serve as the interim head coach.

Before arriving at Duke, Cutcliffe spent seven years at Ole Miss, winning four bowl games. He was an offensive assistant at Tennessee, helping in the development of Peyton Manning at Tennessee and Eli Manning at Ole Miss. 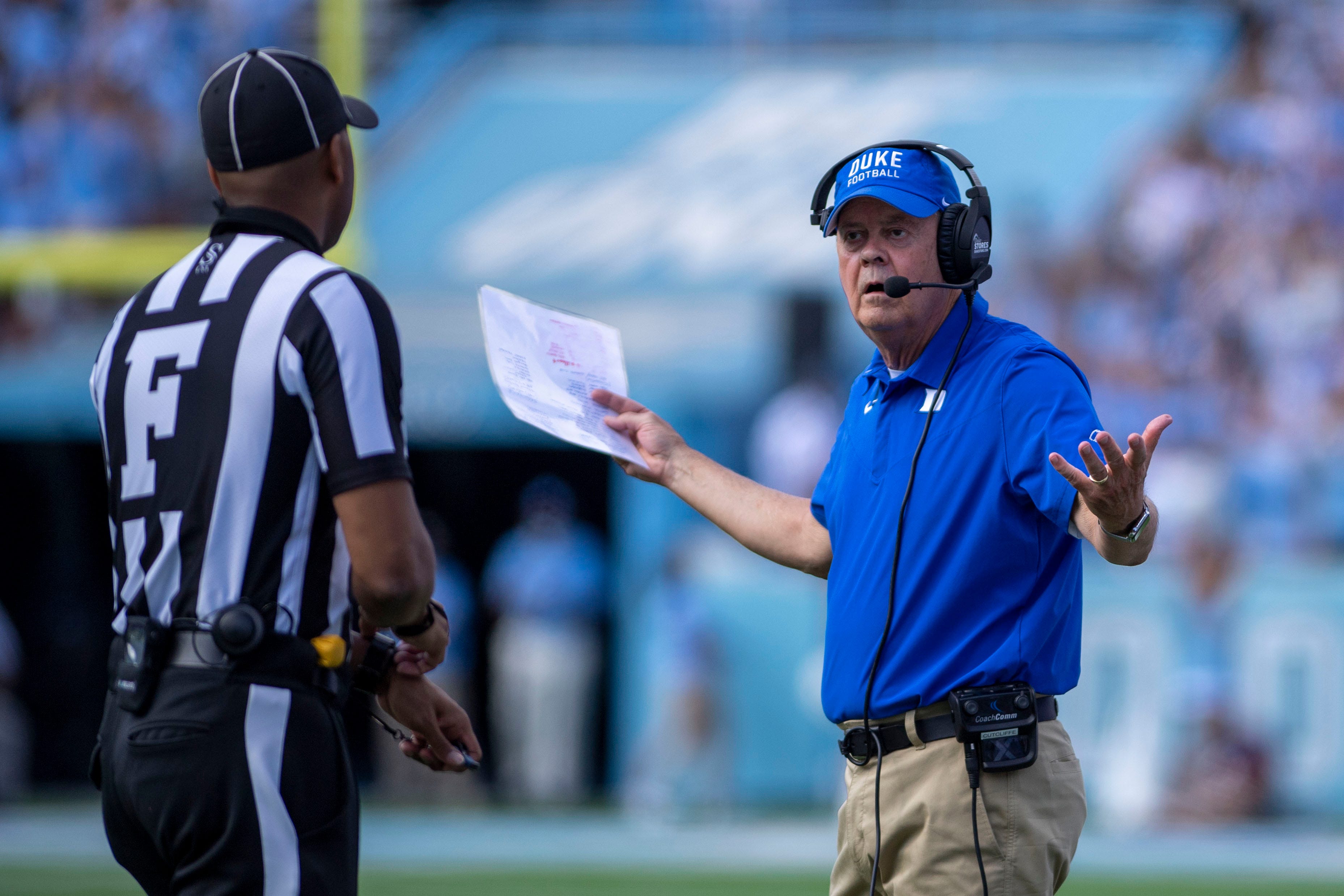 Duke had issues on both sides of the ball this season, ranking last in the ACC in scoring offense.

In 2013, his sixth year at Duke, he led the Blue Devils to 10 wins, the only double-digit victory season at Duke in 100 years of playing college football.

Japan widens COVID curbs, including in Tokyo, as cases surge

Davis scores 27 as No. 8 Wisconsin holds off Northwestern

Edwards leads No. 10 Houston over USF for 8th straight win

The loud support of Hockey Twitter showed just how important #Willie22 was for the sport. The entire sports world came together to honour Willie O’Ree, who broke the NHL’s colour ... Read more »

Hardy vs Spivak Rescheduled For UFC 272

Ultimate Fighting Championship (UFC) has rescheduled a Heavyweight showdown between Greg Hardy and Sergey Spivak to go down at the upcoming UFC 272 pay-per-view (PPV) event on March 5, 2022 ... Read more »

The Latest: Barty breezes into 3rd round at Australian Open

MELBOURNE, Australia (AP) — The Latest on Wednesday from the Australian Open at Melbourne Park (all times local): © Provided by The Canadian Press 1:45 p.m. Top-ranked Ash Barty is ... Read more »

OTTAWA — Michael Houser made 43 saves in his season debut as the Buffalo Sabres downed the Ottawa Senators 3-1 on Tuesday night. © Provided by The Canadian Press Houser ... Read more »

Michigan gets first win in a month, slams Maryland 83-64

NHL pioneer Willie O'Ree 'overwhelmed' as No. 22 raised to rafters during jersey retirement

BOSTON (AP) — Willie O’Ree’s No. 22 now has a permanent home in Boston’s TD Garden. The first Black player to appear in an NHL game, O’Ree became the 12th ... Read more »

2021 was certainly another eventful year, both inside and outside the rink. Over the coming days, PHR will wrap up our look back at the top stories from around the ... Read more »

NEW DELHI — An explosion on an Indian navy ship killed three sailors Tuesday, the defense ministry said. It is unclear whether others were injured or what caused the blast. ... Read more »

By Yoo Jee-ho SEOUL, Jan. 19 (Yonhap) — The 2022 LPGA Tour season will tee off this week in the Sunshine State, with South Korean players looking to bounce back ... Read more »

By Yoo Jee-ho SEOUL, Jan. 19 (Yonhap) — South Korean forward Kim Gun-hee thought he had his first senior international goal last Saturday against Iceland, only to have the marker ... Read more »

Video: The UFC isn't serously about to let Katlyn Chookagian walk away, is it?

An interesting storyline that emerged at UFC on ESPN 32 involved Katlyn Chookagian, who revealed that she fought out her contract, with the UFC declining to give her a new ... Read more »

Biden selects Los Angeles to host next Summit of Americas

MIAMI — The Biden administration has chosen Los Angeles to host a summit of leaders from Latin America and the Caribbean that is a key part of its outreach to ... Read more »

FORT-DE-FRANCE, Martinique — An appeals court in the French Caribbean island of Martinique on Tuesday dismissed a request from groups seeking slavery reparations in a blow to efforts that began ... Read more »

Cowboys quarterback Dak Prescott was quite vocal about his stance of the officials who refereed his team’s 23-17 loss to the 49ers on Sunday afternoon. The NBA community was as ... Read more »

Odell Beckham’s playoff experience up to now has been limited. But, the 29-year old is making the most of it, after showing off his dual-threat capabilities as a passer and reciever ... Read more »

ARLINGTON, Texas — Dallas Cowboys quarterback Dak Prescott issued an apology Tuesday evening for comments made in the wake of his team’s wild-card playoff loss. The Cowboys’ 23-17 loss to ... Read more »

Canadiens' Tyler Toffoli back in lineup after having hand surgery

The Canadiens announced (Twitter link) that winger Tyler Toffoli will return to the lineup Tuesday night, signifying that he has been activated from injured reserve. He has missed the past ... Read more »

Dominique Ducharme and Kent Hughes had similar experiences as hockey players. © Provided by The Gazette Dominique Ducharme signed a new three-year contract worth US$5.1 million after leading the Canadiens ... Read more »

NHL pioneer O'Ree 'overwhelmed' as No. 22 raised to rafters

BOSTON (AP) — Willie O’Ree’s No. 22 now has a permanent home in Boston’s TD Garden. The first Black player to appear in an NHL game, O’Ree became the 12th ... Read more »

Boo or ‘siuuu'? Boisterous crowds cause confusion at Australian Open

A catch-cry made famous by the footballer Cristiano Ronaldo has caused confusion and a degree of annoyance among tennis players and on-lookers alike, with shouts of “siuuu” heard from the ... Read more »

Groundbreaking basketball star Lusia Harris, the only woman to be drafted by an NBA team, has died at the age of 66. Harris’ family announced Tuesday that she died unexpectedly ... Read more »

The Vancouver Whitecaps’ 2021 season stopped in November. © Provided by The Province Whitecaps striker Lucas Cavallini (left, vying for the ball with CF Montreal’s Aljaz Struna during a Major ... Read more »

There is a heavy focus on Derrick Henry’s possible return to the Tennessee Titans’ offense, but Cincinnati coach Zac Taylor is also concerned with quarterback Ryan Tannehill, a player he ... Read more »

The heavyweight matchup between Greg Hardy and Sergey Spivak is headed to UFC 272. © Photo by Louis Grasse/PxImages/Icon Sportswire via Getty Images The UFC announced the switch on Tuesday, ... Read more »

Tampa, Florida, has been given the moniker ‘Champa Bay’ in recent years thanks to the Lightning winning back-to-back Stanley Cups, the Buccaneers winning Super Bowl LV on their home turf ... Read more »

Zibanejad Wins All-Star Vote In, but Decides to Skip Game

Earlier this afternoon the league announced the winners of the “Last Man In” vote and for a short period of time the New York Rangers were one of three teams ... Read more »

Top-seeded Ash Barty breezes into third round of Australian Open

Bruins retire Willie O'Ree's No. 22: 'Thrilled and overwhelmed' as NHL community, city of Boston light up for pioneer