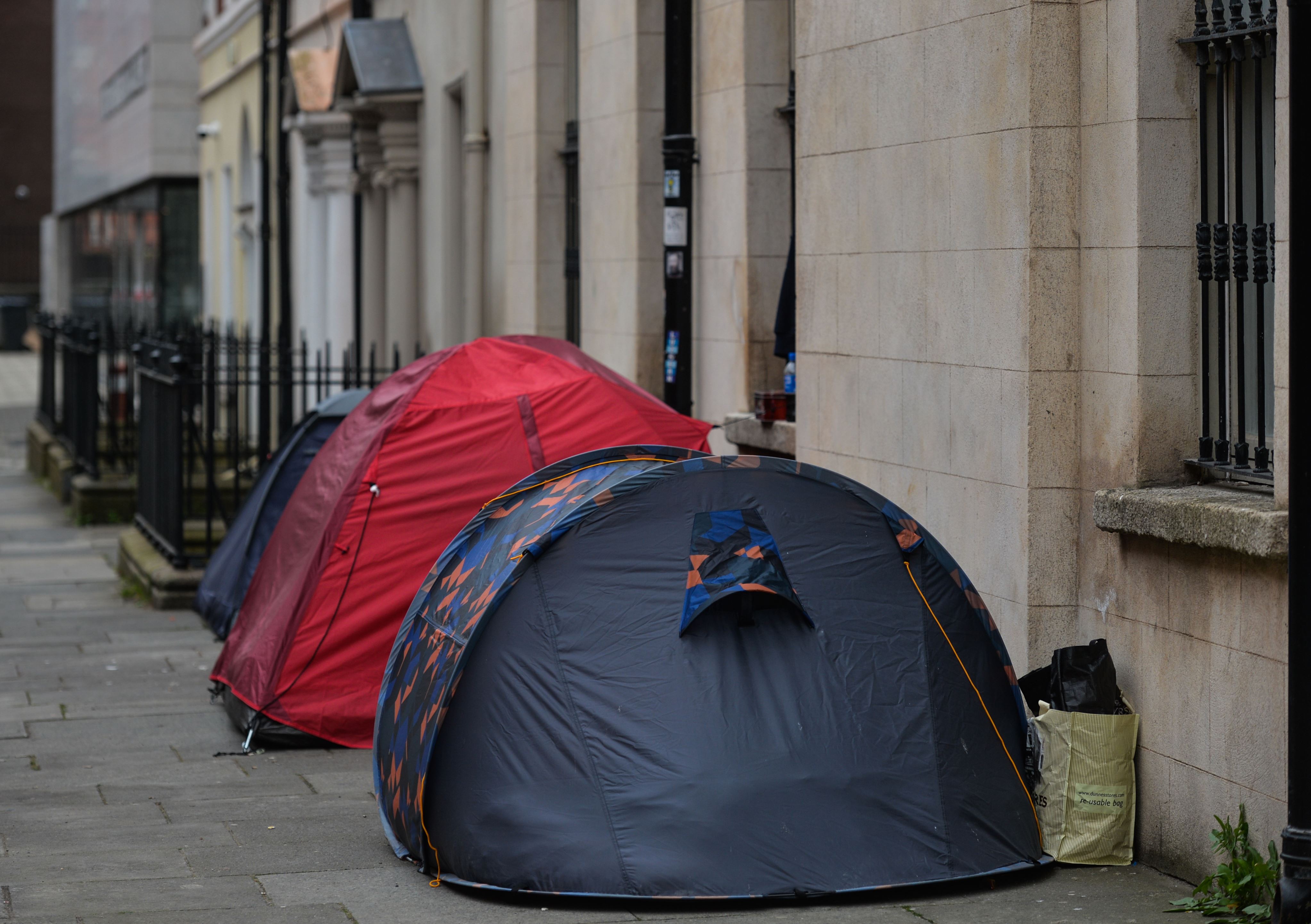 Dublin on-street homeless services have been slammed as ‘undignified’ and ‘unsafe’ by a new report.

On-street services that provide food for the homeless have been heavily criticised in a Dublin Region Homeless Executive report.

There are between 16 and 20 groups providing food, toiletries and clothes to people who are homeless in Dublin, and they can be seen on Dublin streets late at night providing services to crowds of people, often in city centre locations.

However, the review found services to be lacking the “skills” to deal with homeless people, “inherently undignified” and “contributed to increased antisocial behaviour on the city streets.”

The report, which was prepared by an independent consultant, read: “The groups do not have the skills or experience to engage with people who are homeless, and there are examples of their interventions undermining the work of mainstream providers and possibly supporting people to remain on or return to the streets.

The on street service providers were criticised for not paying attention to “nutritional needs or food safety” and “attracting drug dealing”.

The report read: “The model of on-street services where people queue for food and eat in full public view on the main streets of the city is inherently undignified and is potentially unsafe.

“No attention is paid to nutritional needs or food safety and the crowds that gather at the food stalls are thought to attract drug dealing and other unsavoury activity, putting people who are vulnerable at risk.”

The DHRE document continued: “The services have disrupted businesses, intimidated individuals going about their daily work and contributed to increased antisocial behaviour on the city streets.

“There is failure individually and collectively on the part of the responsible official bodies to protect the welfare and safety members of the public and people who are homeless and vulnerable by implementing and enforcing existing regulations in relation to charities, food safety, services for people who are homeless, and obstructive behaviour.”

The “direct negatives” of the services “are significant” and include “intimidating” people, according to the findings of the report.

It read: “They have disrupted the operation of a number of businesses, contributed to increased anti-social behaviour on the city streets, apparently broken rules and regulations with impunity, and threatened and intimidated people going out about their business.”

However, there were benefits to the services listed in the report.

They included: “The benefits of on-street services are for the people who can avail of free items such as food, groceries, and clothes, and the opportunities for social contact and socialising.

It added: “Other benefits include exposure on social and other media, public recognition, and the opportunity to comment on, shape, and change policy.”

Italian dentist presents fake arm for vaccine to get pass

Here's why people might discriminate against foreign accents – new research

Merkel makes final appeal to Germans to get vaccinated

1 / 3Germany MerkelGerman Chancellor Angela Merkel waves goodbye at the Defence Ministry during the Grand Tattoo (Grosser Zapfenstreich), a ceremonial send-off for her in Berlin on December 2, 2021. ... Read more »

A 72-year-old man has been found infected with the Omicron variant of coronavirus in Jamnagar city of Gujarat following his return from Zimbabwe, the state health department said on Saturday. ... Read more »

PATERSON — As a result of the city’s spike in shootings, the Paterson police department is getting a $700,000 federal grant for an intelligence center geared toward tracking guns used ... Read more »

Whether you track your steps with a wearable fitness tracker or through your phone, knowing how much you've walked in a day can be an extremely useful tool for weight ... Read more »

Traditional wrestling continues as a Friday fixture in Kabul

The Associated PressAfghan men wrestle in Kabul, Afghanistan, Friday, Dec. 3 , 2021. The scene is one played out each week after Friday prayers in the sprawling Chaman-e-Huzori park in ... Read more »

The Associated PressPeople line up to cast their ballot for Gambia’s presidential elections in Bakau, Gambia, Saturday, Dec. 4, 2021. Gambians vote in a historic election that will for the ... Read more »

© Provided by BollywoodLife.com Divyenndu set a strong foothold in the OTT space in all his glory with his versatile portrayal of Munna Bhaiya in the Mirzapur series. The tenth ... Read more »

© Provided by News18 Actor Amaljith has confirmed his relationship with actress Pavithra Arvind. The Tamil TV stars are performing the lead roles of Eashwar and Sakthi respectively in the ... Read more »

Bigg Boss 15: Salman Khan bashes Karan Kundrra for getting violent in the house

© Provided by Pinkvilla The upcoming weekend ka vaar episode of the reality show Bigg Boss 15 will be quite an interesting one as the contestants will be schooled for ... Read more »

Sudhir Pandey on joining Sasural Genda Phool 2: It is a show that will imbibe a sense of family & belonging

© Provided by Pinkvilla Veteran TV and film actor Sudhir Pandey shares how he manages to cope with two shows at a time, one being ‘Sasuraal Genda Phool 2’. Commenting ... Read more »

© Provided by Pinkvilla Saturday has kicked off on a special note for Deepika Padukone as she is all set to kick off shooting for Nag Ashwin’s film Project K ... Read more »

The number of infection cases after the Christmas dinner party in Oslo, where at least 13 participants were infected with the omicron variant, has increased to over 90, according to ... Read more »

Where does Iran's nuclear deal stand after seven rounds of talks?

© Provided by Al Jazeera Delegations are expected to head back to the Palais Coburg in Vienna later next week [EU Delegation in Vienna/Handout via Reuters] Tehran, Iran – All ... Read more »

© Photo by Gonzalo Arroyo – UEFA/UEFA via Getty Images Finnish international Lassi Lappalainen, seen here in action against Russia at the Euros, has signed on the dotted line for ... Read more »

© Jerry Andre / Motorsport Images Charles Leclerc, Ferrari, crashes out of FP2 Leclerc lost the rear of his car at Turn 22 towards the end of second practice for ... Read more »

The new Omicron variant has triggered travel bans on countries from southern Africa. But the spread of the virus is also affecting countries around the world with governments rushing to ... Read more »

FRANKIE Bridge has revealed that she was in pop band The Saturdays for “her image” as she was mocked during an I'm A Celeb trial. The former chart-topping singer opened ... Read more »

PARENTS at the “UK's strictest school” have been left furious after their kids were slapped with detentions for wearing masks in class. Teachers at Abbey School in Faversham have reportedly ... Read more »

© Photograph: Xinhua/REX/Shutterstock A traveller enters the Covid testing centre at Incheon international airport in South Korea. LIVE – Updated at 09:38 Follow all the day’s coronavirus news from around ... Read more »

Best known for her cosy property shows, Allsopp has become one of Britain’s most outspoken celebrities during the pandemic – Rebecca Miller/ Contour by Getty Images I am on the ... Read more »

© DADO RUVIC Bitcoin has shed about $21,000 since hitting a record on November 10. Photo: Reuters Bitcoin plunged along with other cryptocurrencies on Saturday, in another indication of the ... Read more »

A WOMAN says she developed an eating disorder and all food tastes like “sewage and garbage” after she caught Covid. Natalia Cano, 20, from Mendham, New Jersey, contracted the coronavirus ... Read more »

A 34-year-old Falmouth man was indicted by a Barnstable County grand jury on a charge of second-degree murder in the Feb. 8 death of Danielle Taylor in Falmouth, according to ... Read more »

© Provided by MoneySmart Lalamove Singapore festive delivery – peak period issues and a solution This post was written in collaboration with Lalamove. While we are financially compensated by them, ... Read more »

THE Army has been called in to help after homes were ravaged by Storm Arwen – with snow and MORE gale-force winds set to smash Britain in the coming days. ... Read more »

On a nondescript office park in the desert town of Be’er Sheva, a “war room” filled with screens showing various maps, rolling information, and graphics inform around a dozen or ... Read more »

© Freddie Wylie scores the only goal of the game as Hibs U18s defeated their Celtic counterparts at HT… Hibs were missing a handful of players with Jacob Blaney, Ethan ... Read more »

Agbonlahor only the latest to use the tired Newcastle tropes

© PA Images Newcastle-fans-gather-outside-St-James-Park There may be no colder take than claiming players won’t want to move to Newcastle because of the weather. The chance to be a hero outweighs ... Read more »

Aly Goni And Jasmin Bhasin To Get Married Soon?

Omicron: Thai government reprimands newspaper for headline saying it is ‘hunting for Africans'

A Jefferies analyst sees Tesla rising 30% in 12 months, even as Elon Musk sells stock. Here's why he has the most bullish call on Wall Street.

Google will release a new smartwatch next year to take on the Apple Watch, new report says

‘It was dreadful': Keir Starmer reveals he does not share Boris Johnson's love for Peppa Pig World