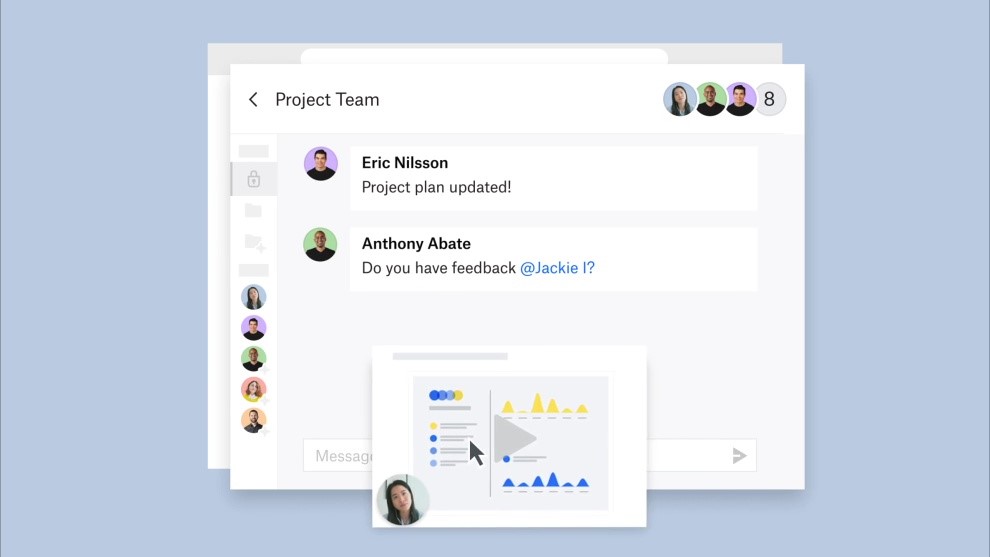 The cloud storage provider Dropbox has announced three new products designed to make it easier for distributed teams to work together from anywhere.

For many employees, working from home has led to endless hours of video meetings, constant chat messages and long emails as opposed to the dynamic communication that comes from being together in the same room. This has been even worse for those who work across time zones which is why Dropbox has created a new all-in-one visual communication tool.

With Dropbox Capture, teams can share their work and ideas asynchronously using short video messages to communicate with their coworkers in less time. The new tool also makes it easier to present your work by allowing users to quickly take screen recordings, screenshots and even GIFs.

At the same time, Dropbox Capture can be used to record and share status updates and work-in-progress with other team members as opposed to having to attend a meeting using video conferencing software. Dropbox Capture is now in beta and users with either a personal or business plan can test it out for themselves now.

Dropbox has also announced a new online collaboration tool that simplifies the process of sharing video content with team members.

Dropbox Replay makes it easier to collect, manage and respond to feedback all in one place. With the new tool, users can share videos with their team so that they won’t need to download a video or take separate notes in an email or using office software to provide feedback. Dropbox Replay also allows users to leave frame-accurate comments and annotations even if they don’t have a Dropbox account.

The new tool even includes a Live Review feature to bring the viewing room experience to life virtually so that users can bypass choppy playback on video calls. Dropbox Replay will launch in beta soon and interested users can join the waitlist now by signing up here.

Finally, Dropbox is making it easier for content creators to monetize their content with Dropbox Shop. The new service allows users to sell all of the digital content creations they have stored in their cloud storage. Users can create product listings in three clicks and automatically deliver content upon payment so they don’t have to worry about delivering content to customers themselves. Just like Dropbox Replay, Dropbox Shop is also launching in beta soon and interested users can sign up here to join the waitlist.

Robert Webb Labels Strictly Come Dancing ‘Brutal' And ‘Weird': ‘I Was Almost Weeping As It Is So Intense'

Why I won't use iPhone 13's MagSafe wallet, even though it's better than ever

There’s nothing more frustrating than misplacing an item; whether it’s the TV remote, your house keys, or your wallet. Spending time searching for the item, or worse, forking out to ... Read more »

When Carl Pei left the OnePlus company he co-founded, the talk was that a phone would eventually emerge out of his new project – and that now seems likelier than ... Read more »

China’s industry regulator plans to deepen scrutiny of the internet industry as it moves into the second half of a six-month campaign launched in July, the agency’s minister told Chinese ... Read more »

Kia’s electric car portfolio is already pretty strong, with the Soul EV, the eNiro and the new EV6 now available, but the South Korean firm isn’t resting on its laurels. ... Read more »

Can sugarcane shoes help you recover from a marathon? We put them to the test

There’s been a recent surge in popularity of eco-friendly running shoes, with brands including Reebok, Salomon and Brooks all launching shoes made from sustainable and recycled materials. Meanwhile Allbirds – ... Read more »

Adam Peaty impressed with his Argentine Tango on Saturday night’s Strictly Come Dancing, but it was the very end of the dance that had everyone talking. As the Olympic swimmer ... Read more »

Black Friday is an excellent time of year to save money on a mattress. Big price drops, extra free gifts, and more offers to choose between than usual make November ... Read more »

A model of South Korea’s homegrown space rocket Nuri is connected to a launch pad at the Naro Space Center in Goheung. (KARI)South Korea will test its first domestically-developed satellite ... Read more »

Life as a 'foreign agent': Inside Russia's crackdown on free speech

Instead of overt brutality, this latest campaign is being waged quietly with a vague legal tool: a law regulating the activities of so-called foreign agents. Read more »

Photo credit: BBC Casualty spoilers follow. Casualty did not air its latest episode as planned this weekend, as the BBC pulled Saturday's new episode from the schedules due to tragic ... Read more »

Billy Connolly: ‘It might be lovely on the other side'

India vs Pakistan, Australia vs South Africa, and a repeat of the 2016 final are just a snapshot of what we’ve got to look forward to before we even get ... Read more »

Amazon puts its own “brands” first above better-rated products

It took Robert Gomez about five months to get his Kaffe coffee grinder to the big leagues in e-commerce: among the first three search results for “coffee grinder” on Amazon.com. ... Read more »

Hyundai Motor aims to produce its own semiconductors

An AhnLab employee and his son learn coding via a metaverse platform at the cybersecurity company’s headquarters in Pangyo, Gyeonggi Province, Saturday. AhnLab held the event for its employees and ... Read more »

A Soyuz space capsule carrying a cosmonaut and two Russian filmmakers has landed after a 3 1/2-hour trip from the International Space Station. The capsule, descending under a red-and-white striped ... Read more »

Sally Carman: I make an effort for auditions but end up playing down-and-out crackheads

Alexa Guard - what it is, and how to use it on your Echo

Voice assistants can be extremely useful, setting timers, providing the day’s news and weather and even controlling your smart home devices for you. But did you know they can also ... Read more »

U.S. President Joe Biden speaks as he participates in the virtual CEO Summit on Semiconductor and Supply Chain Resilience from the Roosevelt Room at the White House in Washington, U.S., ... Read more »

Despite opposition, KDB plans to push ahead with HHI-Daewoo deal

Activists of Islami Andolan Bangladesh take part in a protest outside the National Mosque in Dhaka (Munir Uz Zaman/AFP via Getty Images) Thousands of protesters have taken to the streets ... Read more »

Mikey Garcia hadn’t fought in nearly two years before stepping into the ring for what was perceived as a tune-up fight Saturday in Fresno, California, against Sandor Martin. But for ... Read more »

China's electric car start-ups turn to private equity, venture capital for funds as they are turned away from Shanghai's Star Market

China’s cash-hungry electric vehicle (EV) start-ups, are actively looking to private equity and venture capital for funding, as they seek alternative financing sources in the face of tougher thresholds for ... Read more »

© Provided by Space People all over the world are celebrating the International Observe the Moon Night Oct. 16, 2021. The moon will star in a pair of live webcasts ... Read more »

Sir David Amess: Killer made no attempt to flee the scene

(UK PARLIAMENT/AFP via Getty Imag) Sir David Amess’s killer made no attempt to flee the scene after brutally stabbing the 69-year-old, witnesses have said. After the attack the man sat ... Read more »

Man arrested after 'pretending to be police officer' in alleged bid to kidnap girl, 14

Police – PA A man has been detained after allegedly posing as a police officer in order to approach and kidnap a teenage girl. The incident occurred on Wednesday morning ... Read more »

Deborah Meaden has said she has seen a positive return on the investments she has made during Dragons’ Den. The businesswoman and television personality told BBC Radio 4’s Desert Island ... Read more »

© Getty Images The metaverse is a concept being talked about as the next big thing by tech companies, marketers, and analysts. It’s attracting attention – and money – from ... Read more »

Sales of the game, which releases an updated edition every year, have surpassed US$20 billion (S$27 billion) over the past two decades. NEW YORK (NYTIMES) – It is one of ... Read more »