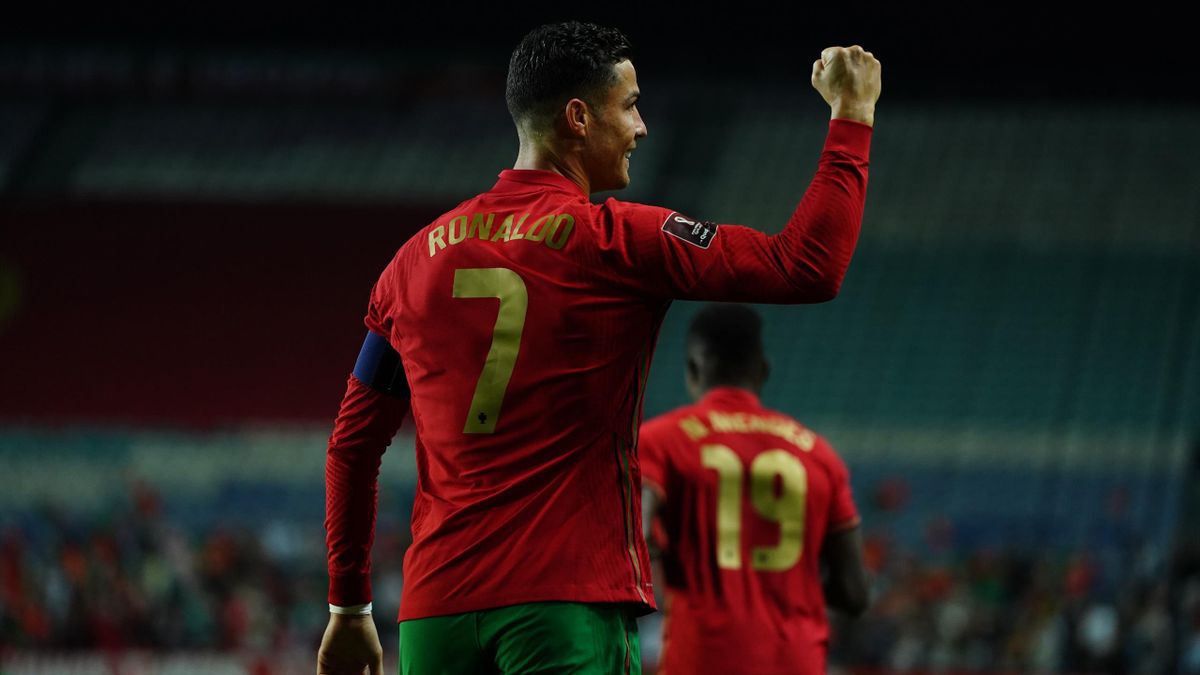 European champions Italy and Portugal could meet for a place at the 2022 Soccer World Cup after being drawn in the same playoff path on Friday!

The Azzurri and Cristiano Ronaldo’s Portugal both finished second in their qualifying groups, behind Switzerland and Serbia, respectively.

Italy will host North Macedonia in the playoff first round in March, with Turkey visiting Portugal, before the winners face off for a spot at next year’s finals in Qatar.

The draw means that one of the last two European Championship winners will not be at the next World Cup. Portugal won the Euro 2016 title.

The winners of Portugal’s match with Turkey will host the final-round game in Path C.

“North Macedonia is a very good team, and if we win we have to play away.”

Italy – who beat England on penalties in the Euro 2020 final earlier this year – are hoping to banish the memories of their playoff heartache from four years ago when they lost to Sweden and failed to qualify for the World Cup for the first time since 1958.

Portugal have featured at every major championship since missing out on the 1998 World Cup.

They only narrowly missed out on automatic qualification when Aleksandar Mitrovic’s late goal snatched a 2-1 win for Serbia in the two teams’ last group match.

Portugal coach Fernando Santos said all the focus now was “to beat Turkey”.

“It’s the imortant match to go through to the final and to win it. We now have to prepare well to be at a good level in March.

“Sometimes they (Turkey) play well, other times not. They’re a team that always present difficulties, but I’m totally convinced that we’ll be going to the World Cup.”

Elsewhere in the playoffs, British rivals Wales and Scotland could play each other in the final of Path A.

Scotland will welcome Ukraine to Glasgow in their semi-final game. Wales take on Austria in Cardiff, with the winners to have home advantage in the final.

The Welsh are hoping to play in the global showpiece for the first time in 64 years, while Scotland have not qualified since 1998.

“It was in 1958 that we last qualified for the World Cup finals and through the playoffs again, so the incentive is there for us.

“We worked ever so hard to get that runners-up position in the group and earn that home draw, and we’ve had the luck of the draw that if we win that semi-final we will also be home for the final, so there’s everything to play for.”

Russia face Poland in the Path B semi-finals, with the winners to host Sweden or the Czech Republic.

The Russians, who reached the 2018 quarter-finals as the host nation, have only ever lost one World Cup qualifier at home – against Germany in 2009

Note: Matches to be played in March 2022

SIR CLIVE WOODWARD: This is the best England squad since we won the World Cup... well done Eddie Jones for recognising it's time for a new wave of players to back the old stagers

TREVOR BAYLISS: Andrew Strauss is the PERFECT man to save English cricket… he's intelligent with an innate knowledge of the game and has wide-ranging experiences as a player, captain and administrator

IAN HERBERT: Get on with it and PLAY! Premier League are insulting our intelligence and destroying the integrity of the competition with these casual, lightweight agreements to cancel… the season is already deeply tainted

'It's got to do with a lot of the things up here in his head': Ralf Rangnick says Jadon Sancho is struggling to cope with the 'level of expectation' at Manchester United following his £73m move

PAUL NEWMAN: No one begrudges England players a drink at the end of a long, difficult Ashes tour… but could they not find better company than Nathan Lyon?

'Harry Potter' actor Rupert Grint says J.K. Rowling is still his 'auntie' even though he doesn't agree with her views

© Provided by The South African It’s fair to say South African fans have little to no love for Ghana after what transpired in their 2022 Soccer World Cup qualifier ... Read more »

© PA Images Brighton’s Tariq Lamptey during their defeat to Manchester City, October 2021. Brighton full-back Tariq Lamptey is one of the most exciting players in the Premier League and ... Read more »

CLEVELAND Browns star Malik McDowell was arrested for public exposure and assaulting a police officer. A school was in session when surveillance video showed a naked McDowell going onto the ... Read more »

© Erich Schlegel-USA TODAY Sports Update 1/18/21 – FC Dallas has made this news official. Ferreira has a new four-year contract with a club option for the 2026 season, the ... Read more »

Adapt-IT: Ready to take private flight into mergers and acquisitions

John McGinn would suit Manchester United manager Ralf Rangnick's style of play... but is the Aston Villa star the right type of player the Red Devils need as they desperately look to bolster their midfield?

AFCON: Gavin Hunt explains why Algeria were so poor in 60 seconds – WATCH

© Provided by The South African Equatorial Guinea inflicted a first defeat in 36 games on Algeria to leave the reigning champions in serious danger of a group-stage exit from the ... Read more »

Integrity Icon is a global campaign by Accountability Lab that is led by citizens in search of honest government officials. It aims to generate debate on the idea of integrity ... Read more »

The recent fatal shooting in Cape Town of a homeless person, Dumisani Joxo, has prompted the South African Human Rights Commission to hold hearings into attacks on those who have ... Read more »

Nikola Tre Trucks To Be Powered By Proterra Battery Systems

AT&T, Verizon agree to delay 5G implementation at some airports

© Josep LAGO AT&T will delay the implementation of its 5G network on a “limited number” of towers near airports following warnings from US airlines AT&T and Verizon agreed Tuesday ... Read more »

Hope for democracy in Iraq as political violence escalates

© Provided by DW A poster of al-Sadr, whose movement won the most seats in Iraq’s federal elections Over the past month, there has been an increase in political violence ... Read more »

Why Penske has faith in its 2022 NASCAR Cup rookie

Since making his debut in NASCAR competition in 2015 with Brad Keselowski’s Truck Series programme, the 23-year-old son of Team Penske President Tim Cindric has faced questions about whether his ... Read more »

Just because fast food giants have vegan options, it doesn't mean you should eat them

US Supreme Court justice draws flak for not wearing mask

Francis Ngannou has 'a big dream' to fight in Africa on historic card with Israel Adesanya and Kamaru Usman... as heavyweight champion warns it will happen 'with or without the UFC'