Stocks slumped on Wall Street Monday in a broad sell-off that extends an already weak streak for major indexes. Worries about debt-engorged Chinese property developers — and the damage they could do to investors worldwide if they default — are rippling across markets.

The S&P 500 fell 1.6%. The benchmark index hasn’t had a decline of more than 1% since mid-August. It’s also coming off two weeks of losses and is on track for its first monthly decline since January.

Banks posted big losses as bond yields slipped. That hurts their ability to charge more lucrative interest rates on loans. The yield on the 10-year Treasury fell to 1.32% from 1.37% late Friday. Bank of America fell 3.1%.

Utilities and other sectors that are considered less risky held up better than the rest of the market.

The worries over Chinese property developers and debt recently centered on Evergrande, one of China’s biggest real estate developers, which looks like it may be unable to repay its debts.

Many analysts say they expect China’s government to prevent a blowup serious enough to cause losses to cascade through markets. But any hint of uncertainty may be enough to upset Wall Street, after the S&P 500 has glided higher in almost uninterrupted fashion since October.

“While the Evergrande situation is front and center, the reality is, stock market valuations are overstretched and the market has enjoyed too long of a break from volatility and Monday’s stock market declines are not surprising,” David Bahnsen, chief investment officer of wealth-management firm The Bahnsen Group said in a research note. 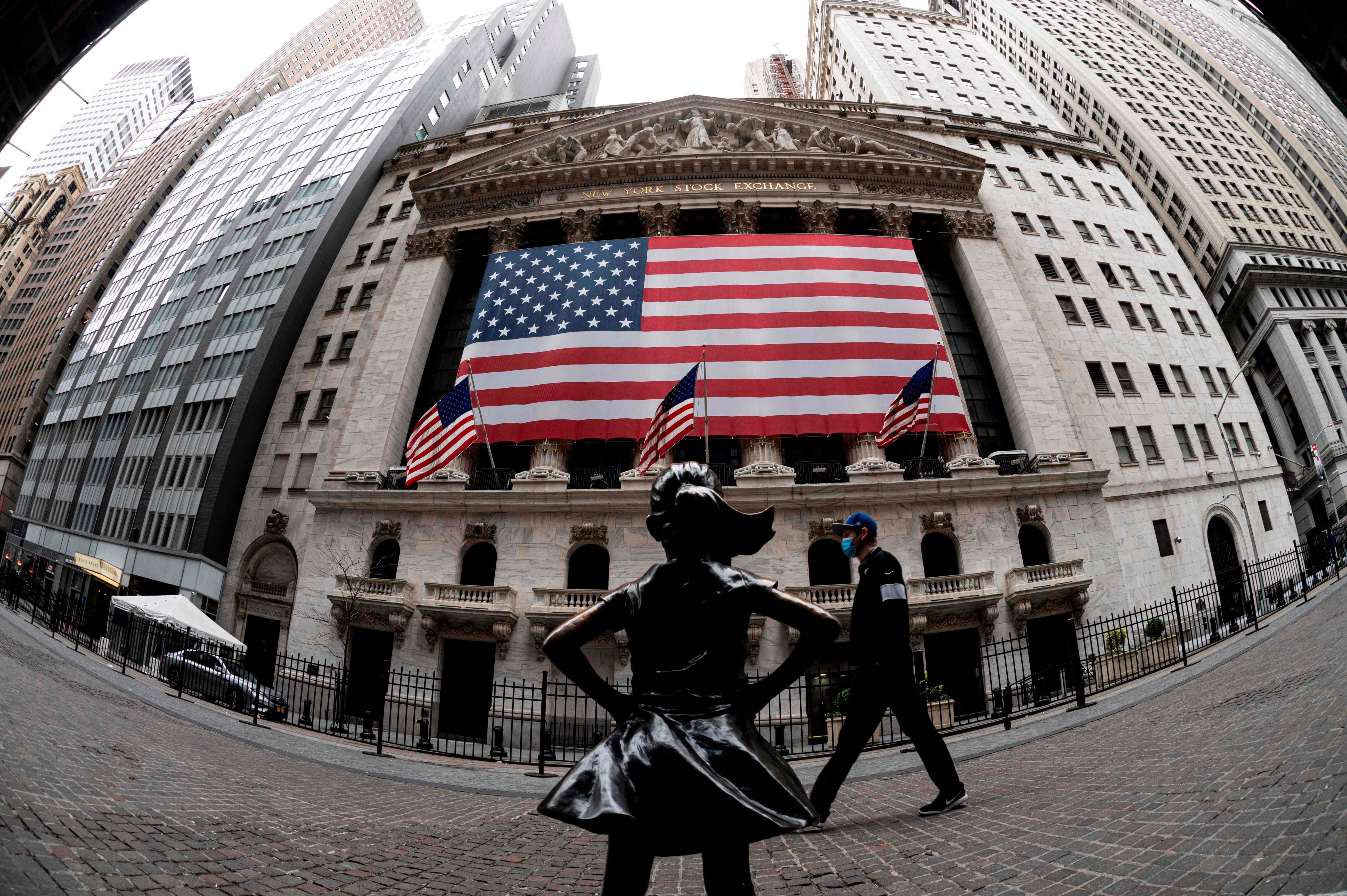 The Hang Seng, Hong Kong’s main index, dropped 3.3% for its biggest loss since July. Many other markets in Asia were closed for holidays. European markets fell about 2%.

Investors are also watching to see how the Federal Reserve reacts to bumps in the broader economic recovery. The central bank has signaled that it will eventually reduce its bond purchases, which have helped keep interest rates low. The timing of that move remains unknown.

►Take our financial literacy quiz: How high can you score?

The Fed is due to deliver its latest economic and interest rate policy update on Wednesday.

Other concerns for investors include a potentially messy political fight in Washington over the U.S. debt ceiling. House Democrats said Friday they planned to move this week to suspend the cap on the government’s borrowing authority, and the White House ratcheted up pressure on Republicans by warning state and local governments that severe cuts lie ahead if the measure fails in the Senate.

IEX board to consider bonus issue on October 21

Richest families in SE Asia look for the next unicorn

(Bangkok Post file photo) Some of Southeast Asia’s old-money tycoons are boosting investment in technology startups, looking to ride a wave of surging valuations as they seek to counter the ... Read more »

The equity market rally continued for the seventh consecutive session, with the Nifty50 crossing 18,500 and the Sensex hovering on 62,000 mark for the first time, on October 18. And, ... Read more »

500bps growth outperformance over FY21-24E as compared to 250bps earlier). We roll over valuations to Sepemtember-23E and increase target multiples for most of the companies in our coverage universe. We remain broadly constructive ... Read more »

ICICI Direct’s research report on MindTree Mindtree Ltd (Mindtree) is a mid-tier IT company with a presence in the US, Europe & RoW catering to BFSI, communication media & technology, ... Read more »

The media company TV Today Network had an opening premium of 121 percent on January 24, 2004. The company’s issue price was Rs 95 and the listing price was Rs ... Read more »

KR Choksey’s research report on Wipro Wipro Ltd (WPRO) Q2FY22 performance was slightly higher than with our estimate. Dollar Revenue was up 6.8% QoQ and in CC term grew by ... Read more »

A Bank of America branch is shown in New York's Times Square.Stan Honda/AFP/Getty Images Bank of America has updated its thematic picks for the fourth quarter, naming its top stocks ... Read more »

Starbucks Korea is hiring 1,600 new employees before the year ends

Photo by: Fabian Holtappels/Pixabay Starbucks Korea has recently faced issues after some of its employees staged a protest due to poor working conditions. They mainly mentioned being overworked and underpaid, ... Read more »

SINGAPORE – The stock of mainboard-listed Raffles Education (REC) was hammered to new lows on Monday as the market got hold of a letter by tycoon Oei Hong Leong to ... Read more »

SAIL ICICI Direct has come out with its second quarter (July-September’ 21) earnings estimates for the Metal & Mining sector. The brokerage house expects SAIL to report net profit at ... Read more »

Tea has been grown in the mountains around Meishan since the island was part of China’s Qing dynasty in the 19th century. The industry matured and expanded under Japanese imperial ... Read more »

Oppo on Monday announced the launch of its Elevate Program in India through which the smartphone maker aims to mentor startups that have the potential to bring the next big ... Read more »

nmdc_92736978 ICICI Direct has come out with its second quarter (July-September’ 21) earnings estimates for the Metal & Mining sector. The brokerage house expects NMDC to report net profit at ... Read more »

JSW Steel said the third mine started producing iron ore on December 10. ICICI Direct has come out with its second quarter (July-September’ 21) earnings estimates for the Metal & ... Read more »

500bps growth outperformance over FY21-24E as compared to 250bps earlier). We roll over valuations to Sepemtember-23E and increase target multiples for most of the companies in our coverage universe. We remain broadly constructive ... Read more »

After the upgrade, the power plant’s capacity will be up to 511MWe instead of earlier 441MWe Read more »

Motilal Oswal’s research report on Mahindra CIE MACA’s strong performance in 3QCY21 was driven by strong revenue trajectory in its India operations, while its EU operations were affected by chip ... Read more »

ICICI Direct has come out with its second quarter (July-September’ 21) earnings estimates for the Metal & Mining sector. The brokerage house expects Hindalco to report net profit at Rs ... Read more »

SON – Neways continues to suffer from shortages of chips and other components. The turnover of the Sonse electronics group decreased in the past quarter. Neways is also taking into ... Read more »

To benefit from strong secondary market momentum, these IPOs could hit Dalal Street by November

The strong momentum in the secondary market, with the benchmark indices trading at record highs, is proving to be a game-changer for the primary market as the rush of initial ... Read more »

Domestic tourists enjoy the view from the Jungle Club in tambon Bophut of Koh Samui, Surat Thani province, on Monday. Revival of the tourism sector will be key to the ... Read more »

Domestic tourists enjoy the view from the Jungle Club in tambon Bophut of Koh Samui, Surat Thani province, on Monday. Revival of the tourism sector will be key to the ... Read more »

Photo by: Napoleon Schwan/Pixabay Netflix was said to have fired one of its staff who leaked confidential information about Dave Chappelle's “The Closer” special. The American streaming giant said that ... Read more »

DMart's Q2 is good, but it is not enough for investors given stock's pricey valuations

Bitcoin gets record in sight

The value of the world’s most famous digital currency may rise due to the expectation that the American authorities will authorize the launch of a so-called exchange-traded fund (ETF) based ... Read more »

Colin Powell, first Black US secretary of state, dies of Covid-19 complications at 84

Russia does not seem to be planning to supply more gas

Gainers & Losers: 10 stocks that moved the most on October 18

Facebook announces plans to recruit 10,000 employees in the EU for its ‘metaverse' vision

Facebook plans to hire 10,000 in Europe to build 'metaverse'

Govt wants LPG subsidy to be given only to vulnerable section of population: Sources