Former President Donald Trump is suing his niece, Mary Trump, The New York Times and three of the paper’s journalists as he claims a 2018 prize-winning investigation about his tax dealings was the result of an “insidious plot,” court documents show.

Trump’s suit, reviewed by PEOPLE, seeks “an amount to be determined at trial, but believed to be no less than One Hundred Million Dollars.”

The Times, in response, called Trump’s complaint “an attempt to silence independent news organizations and we plan to vigorously defend against it.”

The lawsuit, filed Tuesday in New York’s Dutchess County, responds to a Times story published in 2018 about the Trump family’s wealth and alleged efforts to avoid paying taxes. The story cited documents provided by Mary Trump, who revealed herself as the source of the leak in her 2020 book, Too Much and Never Enough: How My Family Created the World’s Most Dangerous Man.

At the time, Trump’s attorney said “allegations of fraud and tax evasion are 100 percent false.”

The Times journalists named in Trump’s new suit are Susanne Craig, David Barstow and Russell Buettner, who co-wrote the bombshell investigative report, headlined “Trump Engaged in Suspect Tax Schemes as He Reaped Riches From His Father.”

Their work earned a Pulitzer Prize for “a distinguished example of explanatory reporting” in 2019.

“The defendants engaged in an insidious plot to obtain confidential and highly-sensitive records which they exploited for their own benefit and utilized as a means of falsely legitimizing their publicized works,” the complaint alleges. “The defendants’ actions were motivated by a personal vendetta and their desire to gain fame, notoriety, acclaim and a financial windfall and were further intended to advance their political agenda.”

The suit cites a 2001 settlement regarding the estate of family patriarch Fred Trump Sr., in which all parties, including Mary, agreed to its terms of confidentiality and non-disclosure.

The former president, 75, argues that settlement from 2001 “plainly states” that those involved in the agreement “shall not disclose any of the terms of [the Settlement Agreement], and in addition shall not directly or indirectly publish or cause to be published, any diary, memoir, letter, story, photograph, interview, article, essay, account, or description or depiction of any kind whatsoever.”

The confidentiality has been litigated already.

In response to a separate suit brought by Trump’s brother Robert Trump last year, which aimed to block his niece’s tell-all by citing the 2001 agreement, Mary’s lawyer defended the contents of Too Much and Never Enough in a statement.

“President Trump and his siblings are seeking to suppress a book that will discuss matters of utmost public importance,” attorney Theodore Boutros Jr., who represented Mary Trump, said. “They are pursuing this unlawful prior restraint because they do not want the American people to know the truth,” Boutros continued. “The courts will not tolerate this brazen effort to squelch speech in violation of the First Amendment.”

A judge agreed, ruling in July 2020 that the 2001 settlement agreement’s confidentiality provision was too vaguely defined and likely related to specific financial details; and that it could not apply to Mary’s decision, all these years later, to speak out about the president.

Her book was soon released.

The new lawsuit claims that the Times journalists engaged in an “extensive crusade to obtain Donald J. Trump’s confidential tax records, relentlessly sought out his niece, Mary L. Trump, and convinced her to smuggle the records out of her attorney’s office and turn them over to The Times.”

In response to the lawsuit, the Times released a statement on Tuesday: “The Times‘s coverage of Donald Trump’s taxes helped inform the public through meticulous reporting on a subject of overriding public interest. This lawsuit is an attempt to silence independent news organizations and we plan to vigorously defend against it.”

Susanne Craig, one of the reporters named, reacted to the claims of nefariousness on Twitter, writing, “I knocked on Mary Trump’s door. She opened it. I think they call that journalism.”

Trump’s attorney contended to PEOPLE that “this lawsuit is in no way an effort to limit free speech or silence the media.”

“Rather, it is about overzealous journalists who clearly exceeded the bounds of journalistic integrity by committing tortious acts in pursuit of a story,” his attorney argued in a statement. 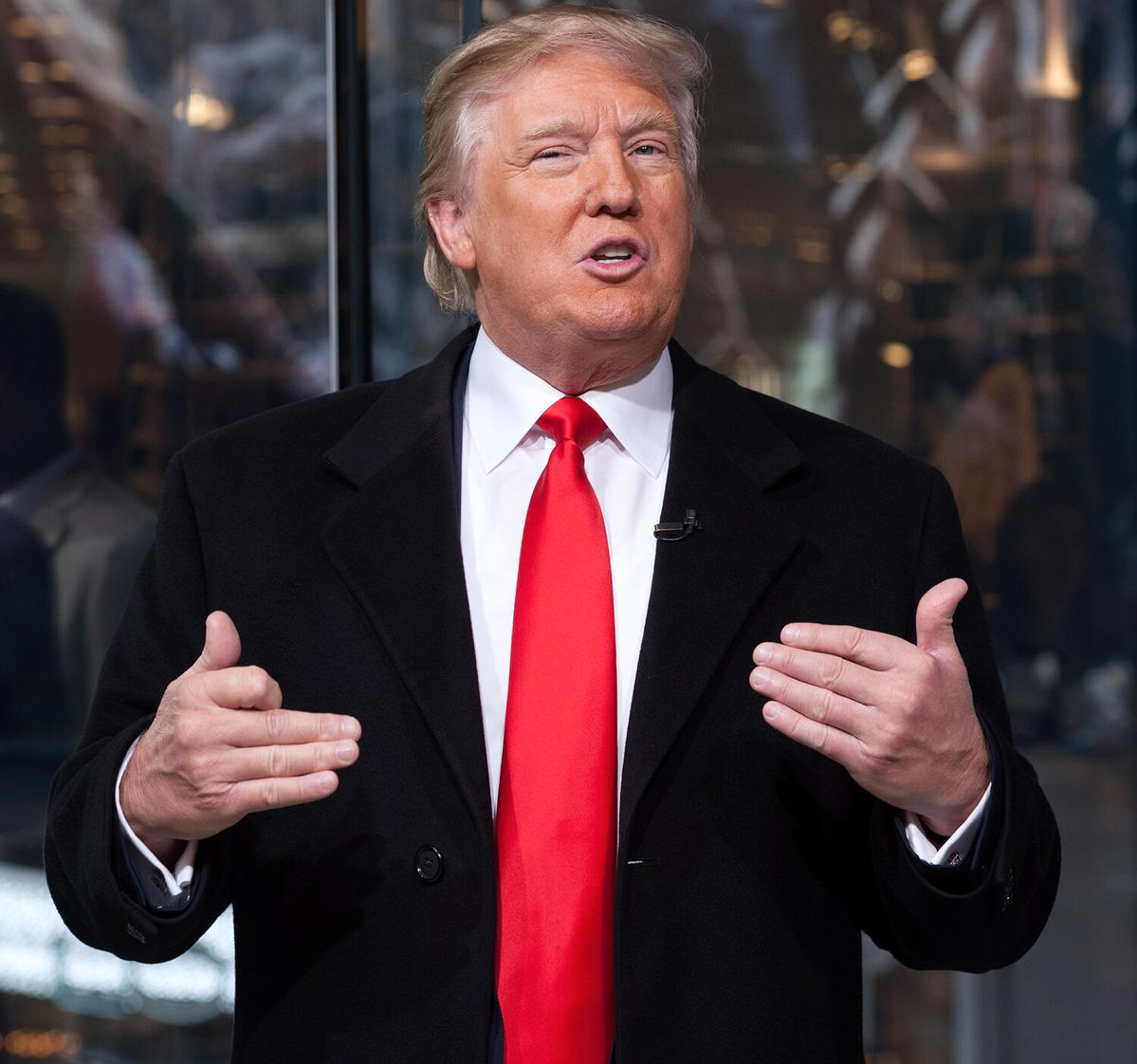 Mary — who has sued her relatives over her own allegations related to the family’s money — likewise gave a statement to NBC News, saying of her uncle, “I think he is a loser, and he is going to throw anything against the wall he can. It’s desperation.”

“The walls are closing in and he is throwing anything against the wall that he thinks will stick,” Mary said. “As is always the case with Donald, he’ll try and change the subject.” (An attorney for Mary did not immediately respond to a request for comment.)

During the 2016 campaign, which Trump won, he committed to the decades-long tradition of presidential candidates making tax returns public. However, the documents were never released by Trump, who repeatedly insisted he would do so once an ongoing audit was completed.

The NFL's Ratings Dominance Is Even More Powerful Than You Think: TRAINA THOUGHTS

5 Concerts To Check Out In Asbury Park This November

ASBURY PARK, NJ – One of the many things that Asbury Park is known for is its vibrant music scene, from bands playing at iconic locations like the Stone Pony ... Read more »

N95 masks and respirators are for sale and back in stock

© Provided by BGR N95 Mask with blue headstraps Last year, N95 masks and respirators for sale online were more difficult to find in stock than any other pandemic essential. ... Read more »

Revival Turkish rugs are 10% off

Rugs are one of those purchases that just seem unnecessarily inconvenient. For one, it can be hard to find a high-quality material with a design you truly love. For another, ... Read more »

© Jamie McCarthy/Getty Images A man alleged to have supplied the pills that caused late rap star Mac Miller’s death has pled guilty to one count of distribution of fentanyl. ... Read more »

Meghan Markle may have left her acting career behind when she became a member of the royal family, but her knack for performance remains, as the Duchess of Sussex proved ... Read more »

Spotify isn’t the only service PlayStation 5 owners can stream music from while they’re playing Deathloop, Returnal or other games. Starting today, you can fire up tracks from Apple Music as ... Read more »

81 percent. That’s the current battery level on the pair of Urbanista’s Los Angeles headphones sitting on my desk. When I took them out of the box about a week ... Read more »

Sen. Joe Manchin (D-W.Va.) on Wednesday said he doesn’t like the idea of targeting only the 700 wealthiest Americans to pay for a big chunk of the Democrats’ spending package, ... Read more »

COLUMBIA, Tenn. (WAFF) – Normally, getting a flat tire ruins someone’s day but for one woman from Columbia, Tennessee, it made her whole week. © Provided by Huntsville-Decatur WAFF Luke ... Read more »

'Boko Haram in Mamelodi has been in existence for six years'

© Provided by 702 The situation is calm in Mamelodi following the killing of Phillip Given Mnguni – widely believed to be the leader of the infamous Mamelodi gang Boko ... Read more »

Gifts for the Impossible Man: 45 Gift Ideas for Men Who Seem to Have Just About Everything

© Image Licensed From Adobe Some guys can be impossible to shop for. We all know the type of guy that replies “I already have everything I need,” when you ... Read more »

© Provided by CapeTalk Western Cape Veterinary Services will host a two-day vaccination drive in Strand This comes after the fourth confirmed case of rabies was detected in the seaside ... Read more »

The Chancellor has delivered his Budget to the nation, including changes that will affect businesses, schools, families on Universal Credit and even smokers. From next April, workers on the basic ... Read more »

© Provided by Daily Mail MailOnline logo The German economy will grow just 2.6 per cent this year as the country’s Covid recovery stumbles, forcing economists to slash their forecasts.  ... Read more »

Chancellor of the Exchequer Rishi Sunak has announced a variety of economic measures today as part of his Autumn Budget. He has delivered £150billion of extra commitments and stoked speculation ... Read more »

Amid a bitcoin price crash that wiped hundreds of billions of dollars from the crypto market, one meme coin has bucked the trend by surging to a new all-time high ... Read more »

‘Cult' leaders in KCK engaged in child labor, beatings and other abuse: indictment

Eight people connected to a religious organization based in Kansas City, Kansas, are accused in federal court of forcing children to perform labor without pay and doling out physical abuse ... Read more »

Emergency response after children hit by vehicle in South Lanarkshire

Emergency services are responding to an incident in South Lanarkshire after several children were hit by a vehicle. The PA news agency understands a number of children were involved in ... Read more »

Use of virtual health care increased 99-FOLD in during pandemic

Queen opts out of COP26 climate summit, her third cancellation in a week

© Provided by National Post Queen Elizabeth appears on a screen via videolink from Windsor Castle, where she is in residence, during a virtual audience Tuesday. Queen Elizabeth has pulled ... Read more »

What to watch on Netflix: Movies & Series (November 2021)

© Provided by BGR Netflix on a TV with a bowl of popcorn Are you looking for what to watch on Netflix? Only the best shows and movies? We’ve got ... Read more »

After word got out last night (Oct. 26) that WWE had released ring announcer Greg Hamilton, Hamilton posted this statement to Instagram confirming the news: © WWE.com https://www.instagram.com/p/CViKbAyrF4X/?utm_source=ig_embed&utm_campaign=loading Hamilton made ... Read more »

UFC president Dana White believes “justice was served” to a fighter who called his opponent a “terrorist” and ended up losing the bout the following night. During Monday night’s Contender ... Read more »

The best ways to get to Hawaii using points & miles

How rising global inflation is hastening rise in risk-free rates

With a widespread surge in power and energy costs, the global inflation trend is extending. This follows the earlier synchronous exponential rise in prices of commodities amid post-COVID recovery and ... Read more »

Durbin invokes Jan. 6 as he defends school board letter during Garland hearing

Attorney General Merrick Garland on Wednesday defended a Justice Department memo asking the FBI to watch out for threats of violence against school boards and education officials as Senate Judiciary ... Read more »

(via REUTERS) The discovery last week of Brian Laundrie’s remains in a Florida nature park only deepened the mystery surrounding the death of his fiancée, Gabby Petito, and Laundrie’s role ... Read more »

Queen opts out of attending COP26, her third cancellation in a week as doctors advise further rest

© Provided by National Post Queen Elizabeth appears on a screen via videolink from Windsor Castle, where she is in residence, during a virtual audience Tuesday. Queen Elizabeth has pulled ... Read more »

Leading sustainable packaging provider DS Smith have revealed how to craft fun and recyclable cardboard costumes – or ‘cardstumes’ – with step-by-step guides this year Spooky season is just around ... Read more »

© AMIR MAKAR Egypt is the second-biggest producer of gas in North Africa after Algeria and accounts for around 1.1% of the world’s proven reserves, AFP Italian energy company Eni ... Read more »

‘Only two pages' of Luxembourg PM's university thesis was not plagiarised

Five things we learned as Rishi Sunak delivered his Budget

Chancellor's Budget more in the mould of Brown than Osborne – IFS

U.S. says Assange could go to Australian prison if convicted

Romanian toyboy, 28, reveals he still has OAP vicar's cash as new lover, 51, pays for everything & he snubs gold-diggers

Pokimane breaks into talent management with launch of RTS

Sherlyn Chopra on Shilpa Shetty & Raj Kundra's defamation suit: It's a tool used to make culprit out of victim