When Gareth Southgate missed that penalty at Euro 96, which eventually led to his quasi-national treasure status, England fans criticised then head coach, Terry Venables for not utilising his substitutes bench in the entire 120-minute encounter with the Germans. 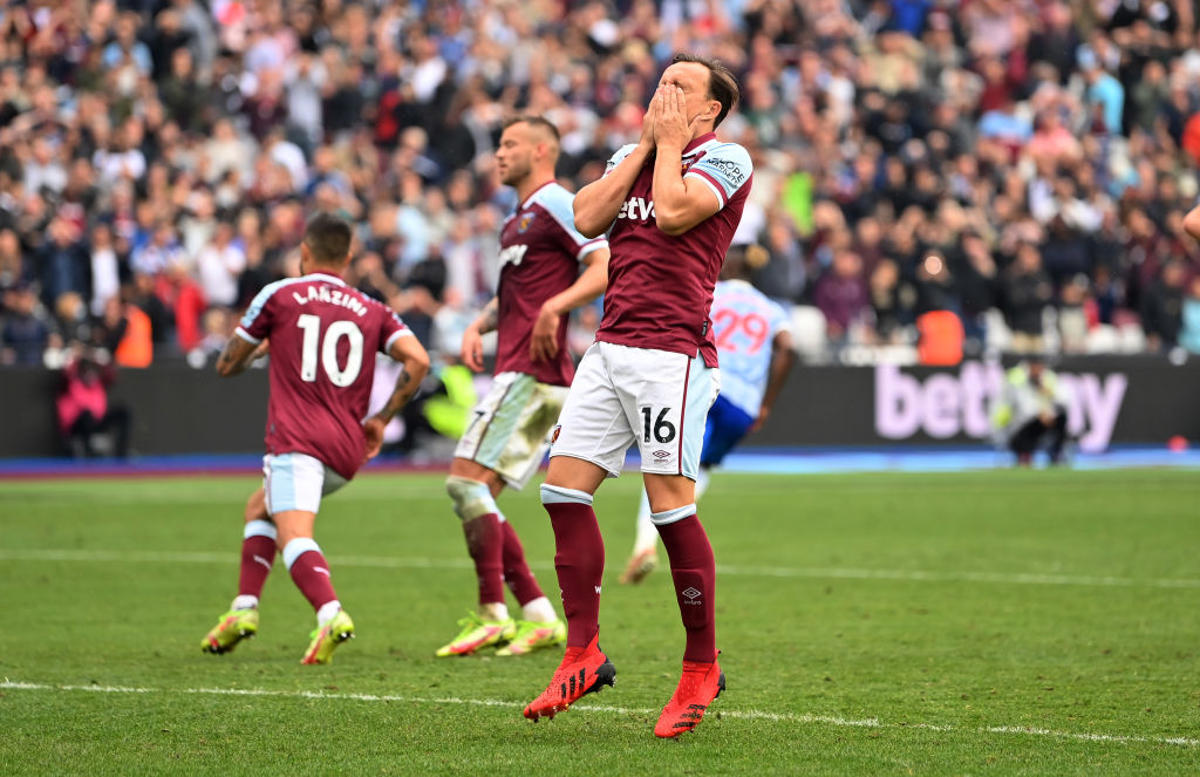 In the aftermath of this summer’s defeat to Italy in the Euro 2020 final, Southgate was broadsided by many England fans for doing the exact opposite – bringing on players cold into a penalty shootout situation. At the end of extra time, both Marcus Rashford and Jadon Sancho came on as substitutes and took penalties without playing any part in the match itself.

And seemingly, managers haven’t learned from just two months ago, with David Moyes opting to bring on Mark Noble in the embers of West Ham’s defeat to Manchester United at the weekend. OK – it wasn’t a shootout: but might as well have been, for the sudden death aspect of rescuing the result for the Irons.

In 1996, Robbie Fowler was Liverpool’s regular penalty taker and had been brought on with 10 minutes remaining of England’s quarter-final against Spain to take the fifth spot kick. When Fernando Hierro struck the bar with Spain’s first attempt and David Seaman beat Miguel Nadal’s effort away, Fowler’s services were rendered irrelevant.

Yet come the semi-final Fowler remained obstinately on the bench. Instead, a centre back winning only his ninth cap with no penalty experience had to volunteer – and we don’t need David Coleman to tell us what happened next.

Speaking to Sky Sports before this summer’s tournament Fowler insisted Venables should have put him on against Germany as well.

He said: “I only played two games – I came on against Holland and I came on against Spain and was down to take the fifth penalty. I was delighted we went through but devastated I never got to score the winning penalty!”

Guy Mowbray commentating on the BBC on Sunday evening seemed to speak for the whole nation when he feared that the Italians would play keep ball for the remainder of the extra time period to deny England the chance to bring on Marcus Rashford and Jadon Sancho ahead of the shootout.

Like Fowler 25 years ago, Rashford is a regular penalty for one of England’s biggest clubs. Outside of Harry Kane, he was the squad member with the most experience of taking penalties. But in order to get their takers on Southgate and Steve Holland had to overrule a cardinal footballing superstition, by making the changes at a defensive set-piece. Then we all saw three unsettling additional minutes where Rashford played right back.

Make no mistake had Rashford not come on and England lost on penalties there would have been an inquest of a different kind.

In 2018, Rashford came off the bench with seven minutes remaining against Colombia and as a 20-year-old scored in that World Cup shoot out. The following year his first-ever Manchester United penalty was a 94th-minute spot-kick away at Paris Saint-Germain, where he needed to beat Gianluigi Buffon to advance to the Champions League quarter-finals.

However, because he and Sancho missed against Italy, Southgate’s decision to bring them on at the very end of extra time has come under intense scrutiny.

Geir Jordet, a football psychology researcher undertook a study of all penalty shootouts at World Cups, European Championships and Copa Americas between 1976 and 2004. He founf that (unsurprisingly) attackers are better than defenders at scoring penalties; that players aged 23 and under performed better than older players; and that fatigued players (those who play 120 minutes) are less successful than substitutes.

These factors should have meant that Southgate was increasing his probability of success by bringing on the 23-year-old Rashford and 21-year-old Sancho for Kyle Walker and Jordan Henderson, both aged 31.

What is the penalty shootout record for substitutes brought on late in extra time?

The phenomenon of substitutes brought on almost solely to take a penalty at major tournaments is quite rare.

We looked at penalty shootouts in major international competitions going back to the 1982 World Cup, the 1976 Euros, the 1990 Africa Cup of Nations and the 2011 Copa America (the only Copa America with extra time), to find substitutes who came on

Pierre Littbarksi was the first such substitute in 1986. Littbarski replaced defender Norbert Eder for West Germany with three minutes remaining in their World Cup quarter-final against hosts Mexico. He took the fourth penalty and scored to win the shootout.

The unified Germany repeated this trick in the aforementioned Euro 96 semi-final with Thomas Strunz replacing Steffan Freund in the 118th minute before scoring the second of eventually six successful German penalties.

Since 1996, six last minute outfield substitutes brought on to take a penalty (selected as one of the first five takers) at a major tournament have failed.

In that time, only two have joined Littbarksi and Strunz in converting their penalties in the same manner: Andy Delort (Algeria) and Lumor Agbenyenu (Ghana) have been successful, both in the 2019 African Cup of Nations.

So going back to 1986, that’s a 40% success rate overall for last-minute penalty substitutes.

Over the same period substitutes who came on after the 100-minute mark but not at the very end of the game in major tournaments have a 77% success rate (17 out of 22).

The sample sizes are small but the discrepancy in the results suggests that there is some truth in the notion that bringing a player on ‘cold’ for a shootout is bad strategy.

If a relatively similar degree of penalty skill is assumed between these two cohorts of players, the remaining possible factors explaining the discrepancy in spot-kick success would appear to be either pressure or readiness.

Were Rashford and Sancho too ‘cold’ to take a penalty? Possibly. Maybe even, probably. Were they the wrong players to trust? Absolutely not.

Southgate has taken England from the nadir of elimination against Iceland to a World Cup semi-final and a European Championship final in less than five years. If there’s anyone that will learn from this experience and make more informed, better decisions come Qatar 2022 it will likely be the man who has consistently modelled decency, humility and courage in a sport and society that doesn’t always reward those attributes.

Subscribe to FourFourTwo today and get three issues delivered for just £3. The offer ends October 17, 2021.

RANKED! Every Premier League kit this season from worst to best

No. 6 Michigan, No. 8 Michigan State meet with high stakes

© Troy Taormina-USA TODAY Sports Dusty Baker and the Astros are taking on the Atlanta Braves in the World Series. Nineteen years after making his first World Series appearance as ... Read more »

© Provided by The Big Lead Carmen Mandato/GettyImages Simple question here from a simple man. Which team is better suited to win the 2021 World Series Hankook GoodSam loanDept? The ... Read more »

Facebook Papers are a ‘call to arms' over pressing need to regulate: MPs

The Facebook Papers make clear the pressing need for governments around the world to crack down and put meaningful regulations on the social media giant, say two Canadian MPs who ... Read more »

A new coach has made the Las Vegas Raiders look like a new team the past two weeks. The Raiders went from back-to-back double-digit losses in their final two games ... Read more »

© HBO Max Last Week Tonight With John Oliver tackled the topic of Taiwan on Sunday night which made for the perfect opportunity to mock John Cena. Cena apologized to ... Read more »

(Reuters) – The U.S. Department of Justice (DOJ) has accelerated its two-year-old antitrust probe of Apple Inc in the last several months, increasing the likelihood of a lawsuit, The Information ... Read more »

NEW YORK (AP) — The New York Jets will try to turn around their season without Zach Wilson for a few games. © Provided by The Canadian Press The rookie ... Read more »

The road to the 2022 Winter Olympics rolls on as another curling pre-trials event gets underway for the men and women hoping to represent Canada in Beijing in February. Before the final selection ... Read more »

Former Manchester United captain Roy Keane is one of the most outspoken pundits in the football world. The Irishman is not known to pull his punches on any subject – ... Read more »

© Bill Streicher-USA TODAY Sports Philadelphia 76ers guard Ben Simmons. Ben Simmons is no longer being fined by the Sixers for missed practices and games, according to reports from ESPN’s ... Read more »

SB Nation Reacts: Will Kidd finish the season as coach?

Welcome to SB Nation Reacts, a survey of fans across the NBA. Each week, we send out questions to the most plugged-in Dallas Mavericks fans and fans across the country. ... Read more »

© Provided by CBS Sports New York Jets rookie quarterback Zach Wilson exited the Week 7 matchup against the New England Patriots early due to a knee injury, and the ... Read more »

TORONTO — Canada’s main stock index climbed for a 14th straight day to reach a new high in the longest streak of daily gains in more than three decades. © ... Read more »

© David Paul Morris/Bloomberg Facebook is set to unveil a new corporate restructuring on Thursday, one that could include a name change for the company. Facebook revealed financial numbers on ... Read more »

© Photo by Giuseppe Maffia/NurPhoto via Getty Images 13 The number of interceptions by Roma in the match. José Mourinho was very complimentary in his post-match comments about his players’ ... Read more »

Manchester United were dismantled by Liverpool 5-0 on Sunday evening. © GiveMeSport Fernandinho’s son mocked Man Utd during their Liverpool humiliation United started off brightly and should have taken the ... Read more »

Manchester United midfielder Donny van de Beek has changed his agent ahead of a possible exit in January, according to reports. United signed Van de Beek in the summer of ... Read more »

Fitzpatrick set for MRI in 2 weeks, no timetable on return

Ryan Fitzpatrick isn’t walking through that door any time soon, which means Washington will continue to roll with Taylor Heinicke at quarterback with the season slipping away. Coach Ron Rivera ... Read more »

Sen. Joe Manchin, who for months has called for a pause in talks over President Joe Biden’s social safety net package, on Monday offered his most optimistic assessment yet that ... Read more »

Prime Minister Justin Trudeau’s next cabinet will have to grapple with an ongoing pandemic and its economic fallout, the persistent international threat of climate change, a crisis in the Canadian ... Read more »

Chelsea and England star Fran Kirby has described her career as a ‘rollercoaster’ as she prepares to win her 50th senior international cap for the Lionesses this week. © Provided ... Read more »

“In total, our financial damage is at least 75,000 euros,” says general manager Wouter Gudde. „The number of individual tickets sold was half lower than in the last home match ... Read more »

INDIANAPOLIS (AP) — Carson Wentz needed a fresh start. The Indianapolis Colts gave him a chance. Now, as the midway point of the season nears, Wentz is rounding into form, ... Read more »

Astros starter Lance McCullers Jr., who dominated in the ALDS before missing the ALCS due to a forearm injury, confirmed Monday that he will not pitch in the World Series. ... Read more »

Jets with lots to fix after embarrassing dud in New England