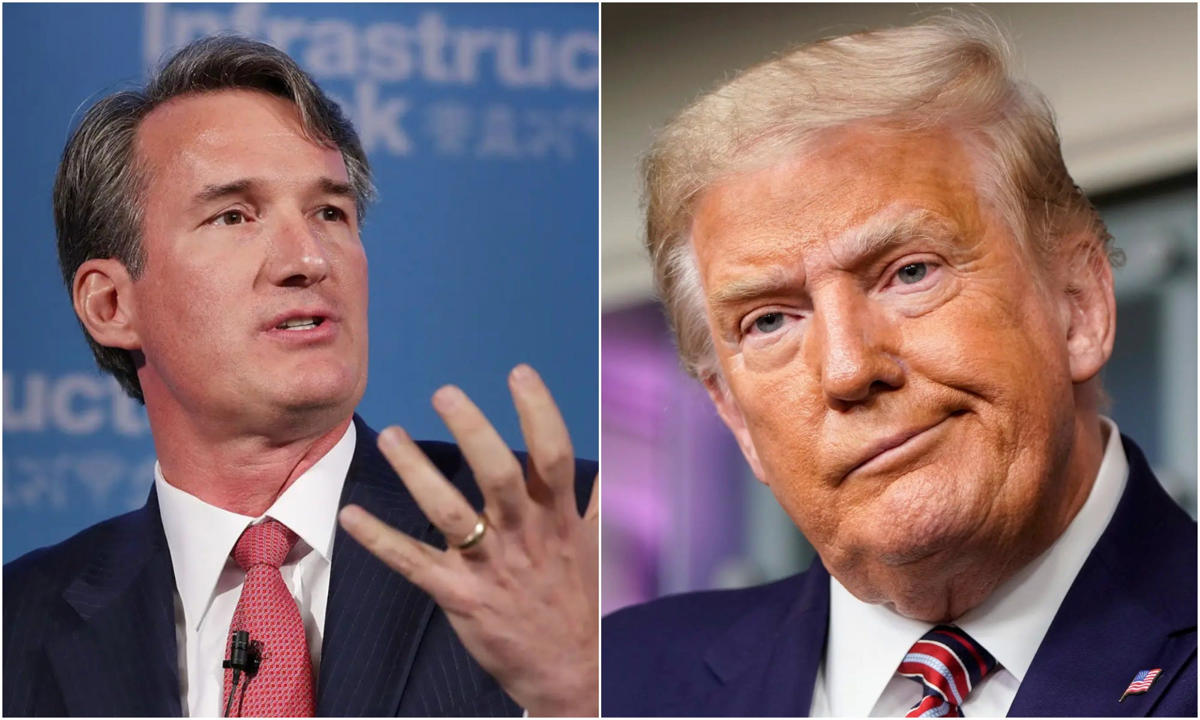 Democrats have been mocking Donald Trump over gubernatorial candidate Glenn Youngkin’s attempts to distance himself from the former president.

Republican Glenn Youngkin is currently running for governor in Virginia against former Democratic Gov. Terry McAuliffe, who held the position from 2014-2018.

Although Trump has endorsed Youngkin and called him a “great gentleman,” the Republican candidate has subtly tried to disassociate himself from the former president.

They also erected a billboard in Florida to highlight the former president’s endorsement of Youngkin, believing that associating him with Trump will damage his chances in the November 2 election.

On Thursday, Youngkin criticized attendees of a recent GOP “Take Back Virginia” rally who pledged allegiance to a flag that was said to have been flown on January 6 near the Capitol.

“It is weird and wrong to pledge allegiance to a flag connected to January 6,” Youngkin said. “As I have said many times before, the violence that occurred on January 6 was sickening and wrong.”

Former White House chief strategist Steve Bannon appeared at the rally and Donald Trump called in on a phone line.

Trump endorsed Youngkin on the call and said, “We’ve got to get him in. I know Terry McAuliffe very well and he was a lousy governor.”

On Thursday, Youngkin avoided answering questions about whether he wanted Trump to campaign for him.

“Anybody who calls me a good man, I so appreciate it, including President Trump,” he eventually replied, according to The Hill.

The Republican candidate has also previously acknowledged Joe Biden’s presidential victory in 2020, putting him at odds with Donald Trump and his allies, who continue to make baseless claims about the election being fraudulent.

Youngkin’s decision to distance himself from Trump is likely because of the former president’s unpopularity in the state.

Democrats had growing success in Virginia during the Trump presidency. In the 2017 governor race, Democratic Ralph Northam defeated the Republican nominee by the largest margin for a Democrat since 1985.

The party then took full control of the state legislature in 2019, and Joe Biden won the state with a solid margin in the 2020 presidential election.

Youngkin is likely aware that the associations with Trump will not help his chances of winning the race, which according to recent polls, is currently neck-in-neck.

Youngkin’s approach, along with Biden’s sagging ratings, has made the Virginia election very competitive.

'Fascinating how Jadeja is preferred over him': NZ great wonders how 'best in the world' Ashwin 'regularly gets dropped'

With this Cyber Monday NordicTrack exercise bike deal, you can save on a piece of fitness equipment that lets you cycle behind a professional mountain biker down the slopes of ... Read more »

Prices are accurate at the time of publication. When you buy through our links, Insider may earn an affiliate commission. Learn more. © Revlon Revlon © Provided by Business Insider ... Read more »

© Provided by Daily Mail MailOnline logo This is the hilarious moment that two guests at an Indian wedding tuck into the free buffet – despite a massive fire raging ... Read more »

Vale David Dalaithngu: the inimitable actor who changed the movies, and changed us

© Photo by MARCO BELLO/AFP via Getty Images One day in 2011, Jack Dorsey called an all-hands meeting at Twitter. The company was in the middle of a push to ... Read more »

© Joanna Burgess Joanna Burgess-Stocks already had an ostomy pouch for urine since childhood—but when she was in her 30s, she found out she needed a second one for feces. ... Read more »

Who is Parag Agrawal, Dorsey's choice to head Twitter

US orders new review of deadly 2019 airstrike in Syria

What Is the COVID-19 Omicron Variant?

How have Australia's international travel rules changed in response to Omicron?

Photograph: Mark Baker/AP We explain what border restrictions have changed and what the new Covid variant means for visa holders planning to travel to Australia Download the free Guardian app; ... Read more »

Labor has criticised the Coalition for proposing a parliamentary sitting calendar for next year that includes just 10 sitting days before August if an election is called immediately after the ... Read more »

Coronavirus has hit the UK hard, with the country recording more than 10m cases and 140,000 deaths linked to the disease. The government figures below include confirmed cases only – ... Read more »

We may receive commission from purchases made via links on this page. Pricing and availability are subject to change. The question is, which toothbrush will you choose? (Photo: Amazon) Keeping ... Read more »

Colts coach Frank Reich: Few regrets over not running the ball in loss to Buccaneers

INDIANAPOLIS — The number was hard to ignore. Twenty-six or twenty-seven passing plays in a row, depending on whether or not a Carson Wentz scramble that was nullified by a ... Read more »

— Recommendations are independently chosen by Reviewed’s editors. Purchases you make through our links may earn us a commission. If you’ve been holding out for a new Apple iPhone, the ... Read more »

© Provided by Daily News DURBAN – President of Abahlali baseMjondolo, S’bu Zikode, said on Monday that the atmosphere in the country and particularly KwaZulu-Natal was fertile ground for an ... Read more »

© Provided by The Guardian Photograph: Ellian Raffoul/AP Jack Dorsey has stepped down as CEO of Twitter and passed the baton to the relatively unknown executive Parag Agrawal. Agrawal, who ... Read more »

Kevin Tinker was a quiet boy who cared for his younger siblings and spent a lot of time playing with friends, his elementary school principal said. On Nov. 21, Kevin’s ... Read more »

CNN said Monday that it will evaluate new information that sheds light on how anchor Chris Cuomo sought to help his brother, former New York Gov. Andrew Cuomo, amid a ... Read more »

Boys In The Boat Release Date, Cast, And Plot - What We Know So Far

Stuart C. Wilson/Getty Images A great sports story is something to behold. Watching an underdog competitor like Rocky Balboa beat the odds and become a true champion is one of ... Read more »

Zach Wilson needs to show improvement for himself and for Jets

Zach Wilson returned on Sunday after missing four games with a knee injury. But was he better than when he left? This is undoubtedly a question the Jets’ coaches are ... Read more »

Artemi Panarin expressed earlier this season that he wants to play for Russia in the 2022 Beijing Olympics, but there was speculation he wouldn’t be invited given his public opposition ... Read more »

There was an emerging star in the secondary in Xavier McKinney. There was a versatile and heady youngster in Julian Love, filling in capably with Logan Ryan unavailable. But there ... Read more »

Comelec sees up to 15 presidential bets, 12 VP candidates for Eleksyon 2022

Save hundreds on a laptop during HP Cyber Monday 2021

Delhi govt to review preparedness to deal with Omicron variant; RT-PCR tests must for passengers from 'high-risk' nations

Canada to allow travellers vaccinated with Covaxin from today

Cyber Monday Star Wars gifts and deals you can still get