Dementia is a general term for clusters of symptoms associated with progressive brain decline. Unfortunately, there is currently no cure for dementia but research has made major breakthroughs in spotting it early. This is crucial because early intervention buys precious time to bolster the brain’s defences against the worst effects of brain decline.

Picking up on the symptoms years ahead of a diagnosis is an abiding focus of research.

A study of over 2,000 people showed a test of memory and thinking can reveal differences in people who go on to develop Alzheimer’s disease (which makes up the majority of dementia cases) up to 18 years before diagnosis.

Based on tests completed 13 to 18 years before the study ended, a lower score in a cognitive test was associated with an 85 percent greater risk of future dementia.

This suggests that the development of Alzheimer’s disease may begin many years earlier than expected before symptoms are recognised. 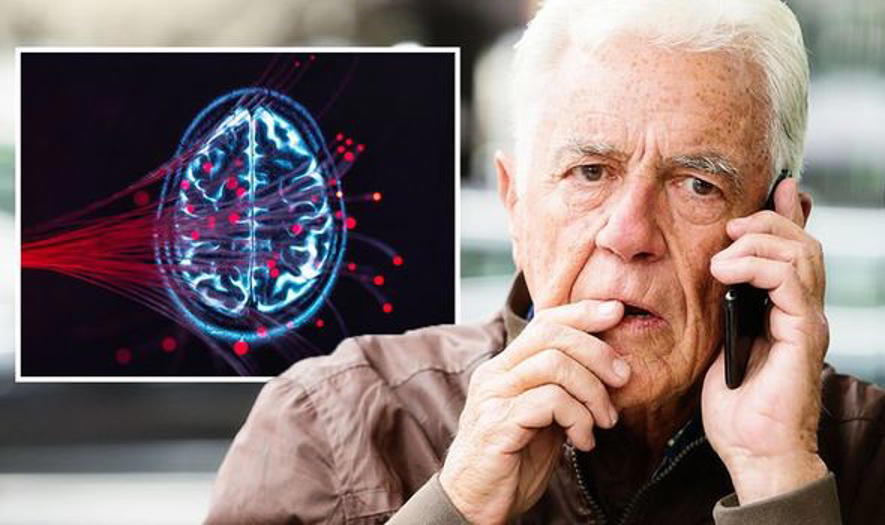 “This study shows that there may be subtle indications of Alzheimer’s disease in thinking and memory as many as 18 years before a formal diagnosis could take place.”

He continued: “This could mean there is a long window of opportunity for treatment in which we could one day halt or slow dementia.

“Although these tests cannot accurately predict who will develop dementia, they could potentially be used to identify people at higher risk.”

Cancer symptoms: The signs on your nails [INSIGHT]

How to reduce your risk

Although getting older is the biggest risk factor for dementia, evidence shows there are things you can do to help reduce your own risk.

These include keeping active, eating healthily and exercising your mind.

Doing regular physical activity is one of the best ways to reduce your risk of dementia.

As the Alzheimer’s Society (AS) explains, it’s good for your heart, circulation, weight and mental wellbeing. 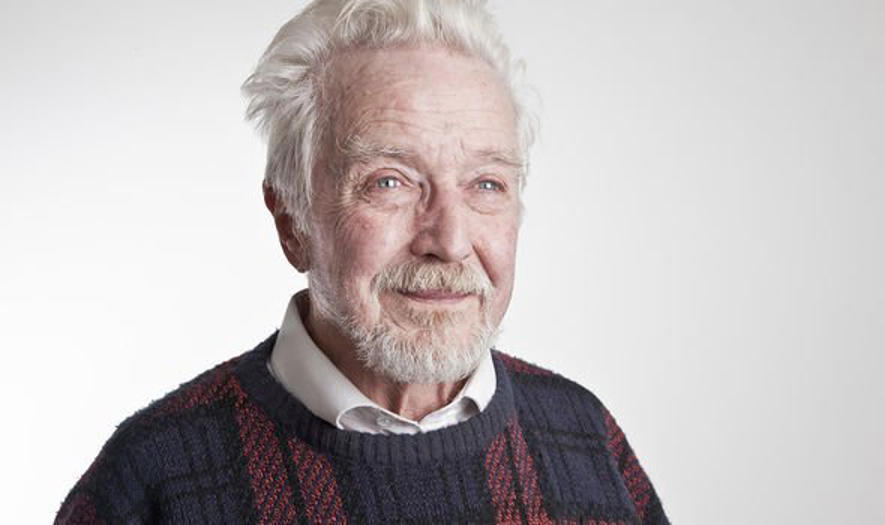 © Getty Images Getting older is the biggest risk factor for dementia

It’s important to find a way of exercising that works for you.

“You might find it helpful to start off with a small amount of activity and build it up gradually,” notes the AS.

“Even 10 minutes at a time is good for you and try to avoid sitting down for too long.”

Research suggests that diet can influence your risk of developing dementia. 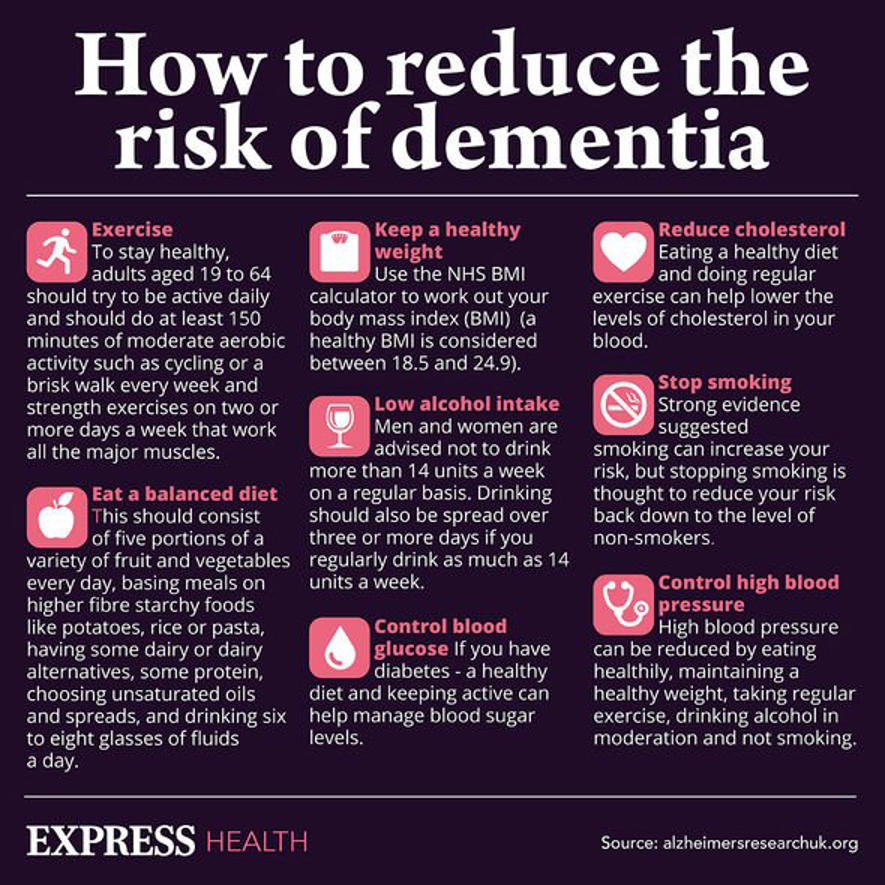 © Getty Images How to reduce risk of dementia

The MIND (Mediterranean-DASH Intervention for Neurodegenerative Delay) diet was created by researchers at Rush University in Chicago, to help prevent dementia and slow age-related loss of brain function.

It’s a combination of two diets already known to reduce risk of heart and circulatory disease:

Both diets are backed by lots of research showing they can help your heart health, and some evidence to suggest they can contribute to lower levels of mental decline.

Covid panic: Boris calls vaccine superwoman back to lead jabs 'This is how serious it is!'

© Getty Emily Lawson Boris Johnson has called the former head of the vaccine programme, Emily Lawson, back from her new job at No10 to take charge of the booster ... Read more »

What Is Prince Regent Cake, As Seen on ‘The Great British Bake Off'?

The fun of watching The Great British Bake Off is yes the competition, yes the British humor, but mainly the chance to learn about an entirely new baked good popular ... Read more »

NBA fans shouldn’t expect to see Philadelphia 76ers point guard Ben Simmons on the court for Friday’s clash with the Brooklyn Nets, but it appears that some progress has been ... Read more »

In honor of Revival’s fourth anniversary, the company is hosting a major sale, which includes 20 percent off everything sitewide when you use the code “THANKS4FOUR” at checkout. Not only ... Read more »

Ex-Raiders coach Jon Gruden says, 'The truth will come out' about email scandal

Free community college expected to be cut from spending bill

President Joe Biden’s long-sought goal of free community college appears to be a victim of cost-cutting in his social spending plan, dealing a major blow to his vision for a ... Read more »

© West Lothian: Three cars seriously damaged by fire in what police believe was deliberate incident. Police Scotland received a report that a car was on fire on Turnhigh Road, ... Read more »

Alec Baldwin speaks out after prop gun incident: 'There are no words to convey my shock'

Alec Baldwin and his family are reacting after the 63-year-old actor discharged a prop gun on the set of the movie “Rust” killing a cinematographer and injuring the director. “There are ... Read more »

EU leaders give Merkel an ovation at final summit

Last week I waited in a packed press pen for German Chancellor Angela Merkel to descend the stairs at the Egmont Palace in Brussels. She’d already had lunch with King ... Read more »

© GiveMeSport Andy Murray gave a frank answer when asked if he had any advice for fellow British star Emma Raducanu, who is currently on the lookout for her next ... Read more »

The Future of Brunch Is in Asia

© Photo by Mai Bach Brunch outside of Ooh Cha Cha in Taipei When Mai Bach opened her restaurant in Taiwan in 2013, she noticed a peculiar pattern among her ... Read more »

© Courtesy of Nike Air Jordan 4 ‘Where the Wild Things Are’ Social media is going crazy over an upcoming Air Jordan 4 release that appears to draw inspiration from ... Read more »

Paul Pogba at No.10? How Manchester United could cope without Fernandes against Liverpool

As Manchester United approach their high-profile bout with Liverpool this weekend, Ole Gunnar Solskjaer could be set to be without arguably his most important player. After playing 90 minutes on ... Read more »

Nobody has ever doubted that Hafþór ‘Thor’ Björnsson has power, but until now we’ve only seen it deployed against journeymen boxers and rank amateurs. No offence. © Provided by Men’s ... Read more »

Dublin Budget Buddy: The properties you can buy in Portobello, Ballsbridge, Drumcondra and Balbriggan for €700k

When it comes to scouring the Dublin property market, your budget alone doesn’t always mean very much – it all depends on where in the city and county you’re searching, ... Read more »

Savings rates have been increased by Paragon Bank and Secure Trust Bank, with interest of up to 1.9 percent being available. For those looking for tax efficient options, ISA deals ... Read more »

© Provided by Daily Mail MailOnline logo Mistakes at a disgraced Covid testing laboratory that incorrectly told up to 43,000 people they were not infected with the virus began a ... Read more »

© SAM BOAL Sam Boal File photo THE GOVERNMENT HAS updated the Work Safely Protocol to take into account changes to its reopening plan unveiled this week. In August, it ... Read more »

Meghan and Harry: a couple of bankers

Honestly, do Meghan Markle and Prince Harry ever have a day off? We only ask because – in the 19 months since they shirked their royal titles and left the ... Read more »

© Provided by dw.com Although Angela Merkel could still be the chancellor of Germany the next time European Union leaders meet, her colleagues decided to give her an official send-offon ... Read more »

Arsenal legend David Seaman has hailed Aaron Ramsdale for proving the supporters wrong after an impressive start to his career with the club. The 24-year-old arrived at the Emirates Stadium ... Read more »

© Provided by dw.com Demonstrators gathered in Berlin to call a climate protection commitment from the new government Thousands of climate activists from the global Fridays for Future movement gathered ... Read more »

© Provided by Football FanCast Premier League – Watford v Liverpool Liverpool face another tough task at the weekend with a trip to Old Trafford to take on Manchester United ... Read more »

‘No one should be killed on set': tragic history of fatalities during filming

Safety on film and TV sets is under renewed scrutiny following the fatal shooting of cinematographer Halyna Hutchins by actor and producer Alec Baldwin during production on Rust, a western ... Read more »

Rafael Benitez has provided a injury round-up ahead of Saturday’s clash with Watford as Richarlison is set for a return but another of key men remain unavailable. © PA Images ... Read more »

© Vogue/DOMINIC LIPINSKI/POOL/AFP via Getty Images adwh.png Adele welcomed Vogue into her gorgeous LA home to participate in the magazine’s 73 Questions series and made an interesting choice when posed ... Read more »

Queen 'back at her desk' in Windsor following overnight stay in hospital, PM says

Boris Johnson has said the Queen is “back at her desk” working following her overnight stay in hospital on Wednesday, as it is understood she will carry out light duties ... Read more »

Where are the workers? Cutoff of jobless aid spurs no influx

Funny memes may have helped people cope with stress of pandemic: study

Caro exhibit 'Turn the Page' is a window into his world

Nova Scotia eyeing taxes for homebuyers coming from outside the province

Alec Baldwin speaks out after fatal shooting on set

Poll: Ashwin or Chahar? And does Hardik fit in if he can't bowl?

Legacy triumphs over the future: T1 dominate Hanwha Life Esports to move on to Worlds 2021 semifinals

Paytm gets regulatory nod to launch India's biggest ever IPO

How to claim Souvenir Packages in CS:GO during the PGL Stockholm Major