Daniel Andrews and Anthony Albanese shared a barbecue selfie in MelbourneThe two Labor leaders are 'great mates' and announced major election promise Twitter users claimed the photograph was staged because of one small detail Premier hit back though by saying he had already cooked the steak on the grillAlso mocked 'joker' federal Liberal MP Jason Wood, who questioned photo-op

Daniel Andrews has hit back at claims he staged a fake barbecue photo-op with Labor leader Anthony Albanese – insisting the grill was turned on and that he had already seared his steak off camera.

Mr Andrews was mocked by eagle-eyed Twitter users at the weekend who spotted that there were no char marks on the sirloin in Mr Albanese’s selfie of the pair enjoying a catch up in Melbourne.

There was also no sign of a flame under the grill and critics pointed out the asparagus sitting beside the barbecue looked raw.

A fired up Mr Andrews took exception to the controversy on Tuesday, insisting the pair had moments earlier used a frying pan to ensure the steak was cooked properly. 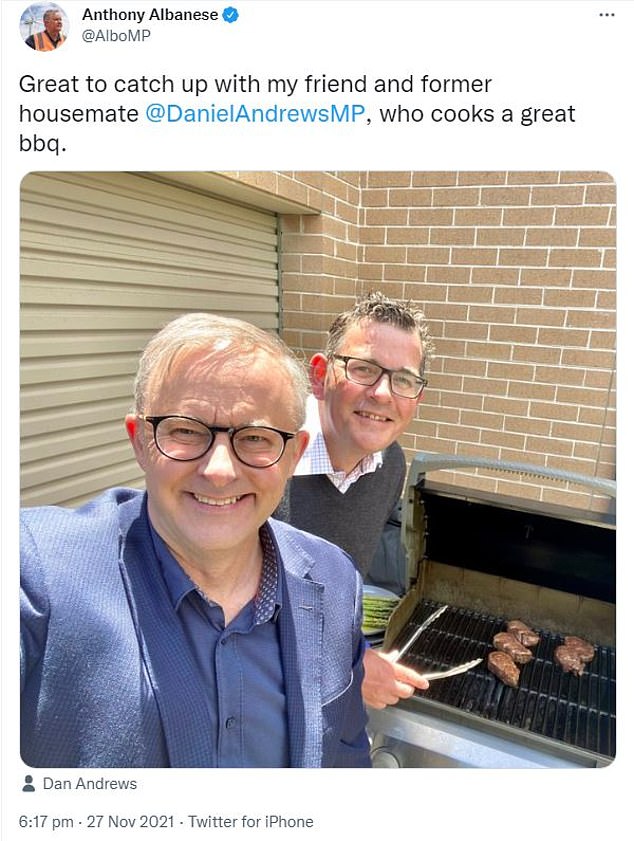 Great mates Daniel Andrews (right) and Anthony Albanese (left) fired up some sirloins when the pair met in Melbourne on Saturday, but some commenters who looked a little closer started a beef with the two over a small detail in the selfie

‘The gas was on,’ Mr Andrews said, shaking his head. ‘Searing a steak before you put it on the barbecue is not the most novel thing ever.

‘Maybe I should have taken a wider shot for the side burner which had a frying pan on it.

‘I can assure you the asparagus went onto the barbecue and was cooked.’

Mr Andrews also took the opportunity to hit back at federal Liberal MP Jason Wood, who questioned the practicality of the Victorian leader cooking in a woolen jumper.

‘It was windy and not that warm,’ the premier said. ‘That’s why I had a jumper on.’

‘Who’s that joker Jason Wood – if I were him I’d be out campaigning, given the way they’re travelling at the moment, rather than commenting on my barbecuing skills.’

Mr Albanese’s selfie on Saturday sparked a series of questions from commenters questioning the authenticity of the pair’s photo together.

‘If those steaks were cooked on that barbeque, how is it so clean? Where are the grill lines? Why is it off?’ one person wrote. 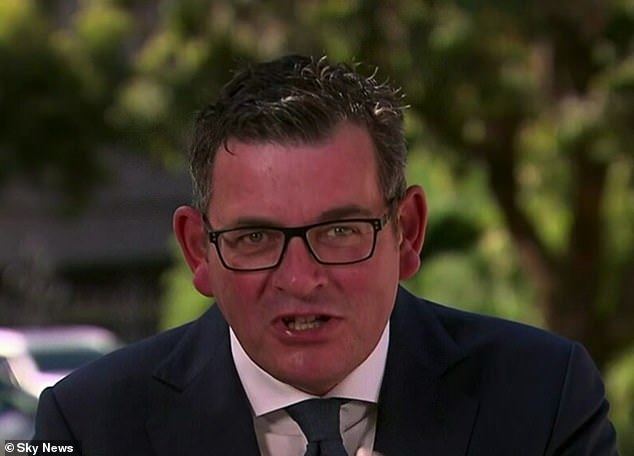 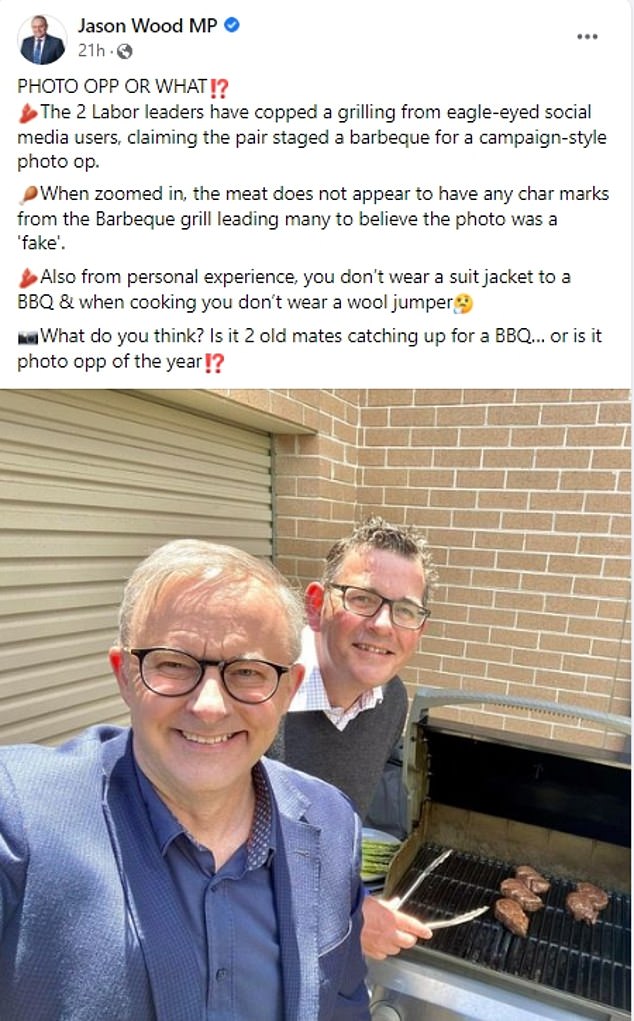 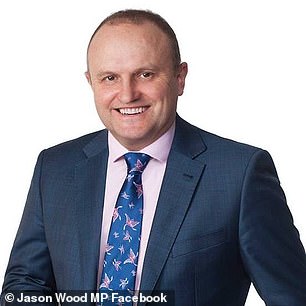 Pictured: Liberal MP Jason Wood mocked Mr Andrews’ photo op. ‘Who’s that joker Jason Wood – if I were him I’d be out campaigning, given the way they’re travelling at the moment,’ Mr Andrews said

Another said: ‘Embarrassingly staged! Anyone who has ever barbecued a steak on a grill, knows that these steaks were NOT cooked on that grill. Pathetic.’

Others remarked that the pair were not dressed for Saturday afternoon barbeque as Mr Albanese was in a suit and Mr Andrews in a shirt and jumper.

But supporters of Mr Andrews and the Labor opposition leader argued the two ‘men of integrity’ would never do such a thing.

They said no flames could be seen because of a very logical explanation.

‘Sounds like you have never heard of resting your steak!’ one person wrote.

Another said: ‘This puts a smile on my dial! This is what Australia needs!’

‘What a great photo. Not staged. Just two mates enjoying a BBQ,’ a third added. 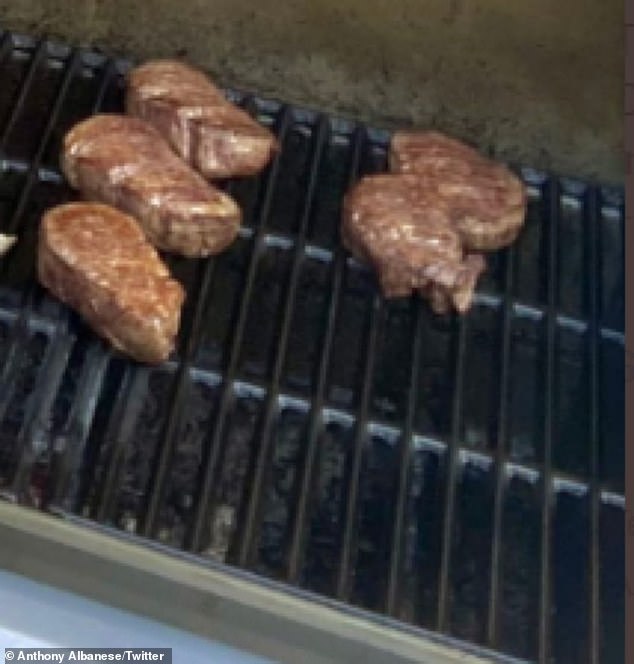 When zoomed in, the meat does not appear to have any char marks from the Barbeque grill leading many to believe the photo was a ‘fake’.

Albo made the trip down from his Grayndler electorate in Sydney at a time when the stakes have never been higher as a federal election looms early next year.

While travelling in Victoria over the weekend, Mr Albanese pledged a federal Labor government would partner with the Victorian state to upgrade Barwon Heads Road from Geelong to the southeast edge of Port Phillip Bay.

He promised ‘more local jobs, quicker commute times, and a better life for people on the Bellarine’.

At the same time the pair were supposedly working the tongs, a major anti-lockdown, and vaccination protest was being carried out in the centre of Melbourne with demonstrators shouting ‘sack Dan Andrews’.

Fury as low-traffic neighbourhoods are blamed for delays to more than 3,000 fire engines out on emergency calls in London

Arsenal vs Burnley prediction: How will Premier League fixture play out today?

Kanye West and girlfriend Julia Fox throw their arms around each other as they enjoy PDA reunion in Miami... the city where their relationship began on New Year's Eve

Chelsea vs Tottenham live stream: How I can Premier League game on TV in UK today?

Senegal were Africa Cup of Nations runners-up in 2019, and their bid to go one better this time continues in the last 16 against Cape Verde. They are one of ... Read more »

Crystal Palace vs Liverpool live stream: How can I watch Premier League game on TV in UK today?

© ES Composite PLHow2WatchCrystalPalaceLiverpoolv2.jpg Crystal Palace host Liverpool on Sunday afternoon in what could be another hugely significant weekend in the Premier League title race. While, clearly, it won’t be ... Read more »

© ES Composite ArsenalPredictedXISakav1.jpg Mikel Arteta could name an unchanged side for Arsenal’s clash with Burnley on Sunday. The Gunners were beaten 2-0 by Liverpool on Thursday as they crashed ... Read more »

Costeen Hatzi has proven to be a loyal girlfriend since she started dating tennis champion Nick Kyrgios.  On Sunday, the 21-year-old showed her support as she sat in the crowd watching ... Read more »

© PA Wire The poll was conducted by Savanta Comres (Jane Barlow/PA) – PA Wire More than half of respondents to a poll do not want a three-option referendum on ... Read more »

The January transfer window is now open and active for Premier League sides Clubs will have until 11pm on Monday, January 31 to complete their signings A number of high-profile players have been linked with big-money transfers Catch all the latest transfer news and done deals from around the world here  Read more »

Can a sick note make you better? Dr Gavin Francis on the power of convalescence

© Provided by The Guardian Photograph: Murdo MacLeod/The Observer While training to become a GP, Gavin Francis became ill with a severe sinus problem. In acute pain and exhausted as ... Read more »

Bournemouth 'are lining up a move for Andy Carroll' in their promotion push after his Reading deal ran down, while Burnley 'monitor the situation' as Sean Dyche continues his search for Chris Wood's replacement

The UK will stand “shoulder to shoulder” with Ukraine but it is “extremely unlikely” British troops will be sent to the Russian border, Dominic Raab has said. © Sky News ... Read more »

The biggest property trends for 2022 revealed

The ‘race for space’ that’s dominated the property market for the past 20 months will carry on throughout 2022, according to experts. Kickstarted by the pandemic, it’s seen prospective buyers ... Read more »

"Out of their reach": Journalist dismisses "interesting" Leeds transfer link to 25 y/o "animal"

© GiveMeSport Leeds manager Marcelo Bielsa on the touchline Journalist Pete O’Rourke does not think that signing Torino full-back Ola Aina is a priority for Leeds this month. Aina has ... Read more »

'I'm not ready for this', 'Yesss' - Many Liverpool fans erupt as James Pearce drops update

‘The worst luck’, ‘At least it’s happened during the transfer window’ – Plenty of Blackburn fans react to significant player update

Blackburn Rovers have been dealt a heavy blow, after it was revealed that new signing Dilan Markanday is facing a lengthy spell on the sidelines. Markanday only joined Blackburn in ... Read more »

Charlotte Crosby has spoken out about her new boyfriend Jake Ankers and loving her body after years of of struggling with her weight. The reality star, 31, has revealed that ... Read more »

A 16-year-old boy has been tragically killed after being stabbed in StretfordPolice called to  Thirlmere Avenue, in Stretford, shortly before 7pm last nightTeen was treated at scene before being taken to hospital where he later diedBoy's family have been notified by officers and have been left  'devastated'  Read more »

© Provided by The Guardian Photograph: Getty Images One of the most wonderful (and peculiar) things about gardening is the seemingly universal desire to defy climate to create landscapes that ... Read more »

There were very few positives in that disappointing Severnside derby loss for Cardiff City, but Tommy Doyle was undoubtedly one of them. The Manchester City loanee was thrown straight into ... Read more »

© Bang Showbiz Eddie Vedder on next Pearl Jam album Eddie Vedder says Pearl Jam will work with Andrew Watt on their next album. The ‘Alive’ group’s frontman had the ... Read more »

© ES Composite PLCrystalPalaceLiverpool2122.jpg While Liverpool’s trip to Crystal Palace on Sunday will be not quite as dramatic as their infamous 3-3 draw there in 2014, it is still a ... Read more »

© ES Composite PLChelseaTottenham2122.jpg Weeks ago, the notion of Chelsea’s visit of bitter rivals Tottenham being anything close to a potential battle for the top four would have sounded strange. ... Read more »

© PA Wire Tuchel will look for much-needed points on Sunday (Adam Davy/PA) – PA Wire Chelsea will face Tottenham in a must-win match for the Blues in the Premier ... Read more »

Chelsea have been given a major boost by the return of Trevoh Chalobah and Reece James to training – but neither will be ready to face Tottenham in Sunday’s crunch ... Read more »

© Getty Images Palace sit 11th heading into their match against Liverpool on Sunday – Getty Images Liverpool have won each of their last nine meetings against Crystal Palace, scoring ... Read more »

© ES Composite PLArsenalBurnley2122.jpg Arsenal and Burnley will both resume Premier League duty on Sunday in a game that feels significant. While Mikel Arteta’s side have been rightly praised for ... Read more »

Australia has voted for its favourite movie of all time – with surprising results.  In a report published by The Sunday Telegraph, the 1997 hit The Castle came up trumps in ... Read more »

Jon Jones brutally taunts Francis Ngannou and Ciryl Gane after claiming their UFC 270 fight was 'boring', in a bout which saw Ngannou retain his world heavyweight title by unanimous decision

EXCLUSIVE: Woman who had THIRTEEN stillbirths and miscarriages 'cried herself to sleep for three months' after her relationship broke down - but she's determined to become a single mum using a surrogate from Greece

EXCLUSIVE 'I must be the unluckiest girl in Britain': Stunned primary school teacher, 26, reveals she has been struck down by Covid for the THIRD time in a year

Nigeria vs Tunisia live stream: How I watch AFCON game on TV in UK today?

A real dream team! Workers share colleagues' incredible acts of kindness - from finding a kidney donor for fellow teacher to throwing a baby shower for a pregnant pet snail

Who WILL be the BBC's next political editor? Chris Mason becomes the second leading candidate in days to rule themselves out of being Laura Kuenssberg's successor