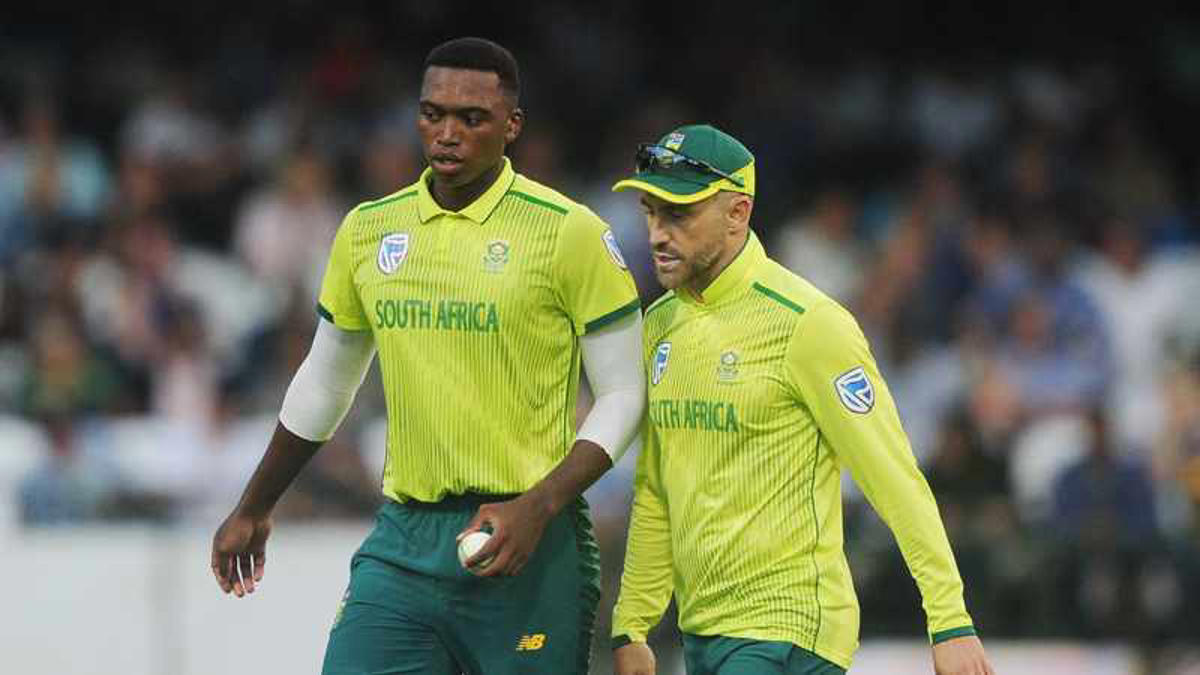 Cape Town – Cricket South Africa shot themselves in the foot on Saturday morning when they congratulated Lungi Ngidi for winning the Indian Premier League title with Chennai Super Kings on Friday in a now deleted Instagram post.

Proteas star Ngidi did not feature in Friday’s final, and played just three games this season, picking up just five wickets for the Super Kings.

Former Proteas skipper Faf du Plessis, who not only played in the final, but had a productive season, was rightfully annoyed with the Instagram post, replying: “really???”. 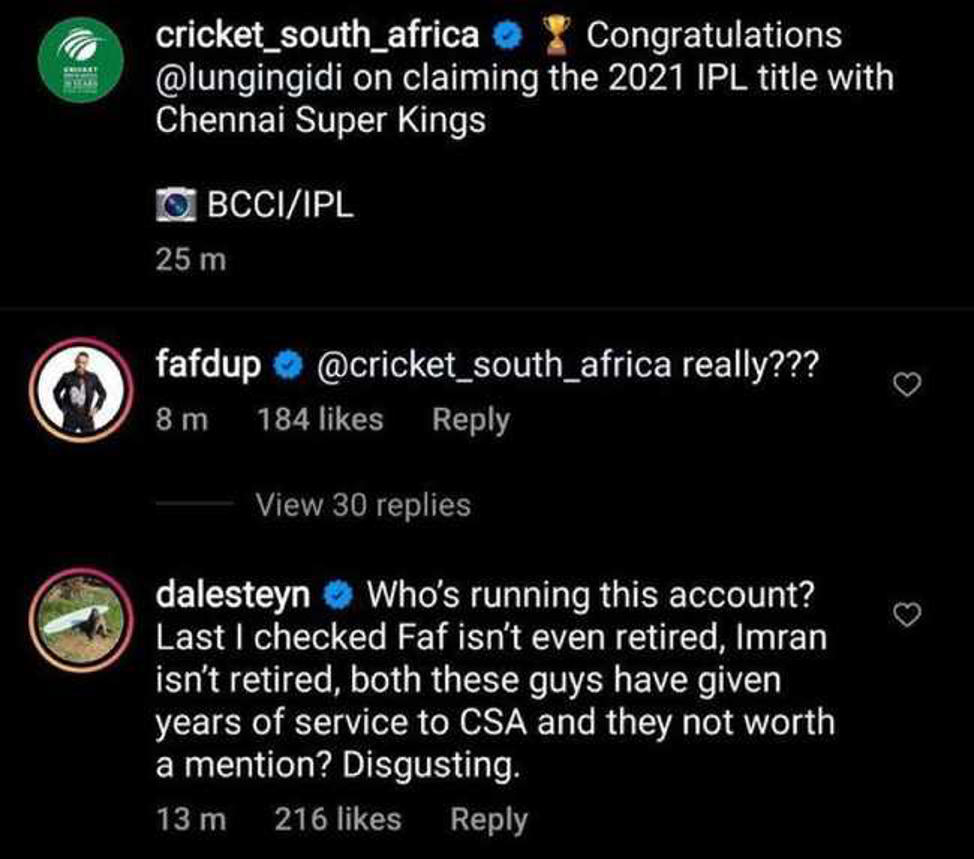 Not only did Du Plessis play in the final, he smashed 86 off 59 balls and was named man of the match as the Super Kings claimed a fourth IPL title.

CSA’s snub of Du Plessis, along with Imran Tahir did not sit well with the recently retired Dale Steyn.

“Who’s running your account? Last I checked, Faf isn’t even retired, Imran isn’t retired. Both these guys have given years of service to CSA and they not worth a mention? Disgusting,” the Phalaborwa Express commented on the now deleted post.

Do the right thing.

Delete the post and add all the men involved, save yourself the embarrassment and ridicule.

“CSA opening a can of worms for themselves with their Twitter and Instagram. Whoever’s running those accounts needs a talking too (sic).”

ALSO READ: How Proteas stars fared in the IPL in the desert

Cricket South Africa eventually relented, and posted a new Instagram post: “Congratulations to all the South Africans who competed in and claimed victory in the 2021 IPL Final with Chennai Super Kings. Notably Faf du Plessis who put in a Man of the match performance.”

The incident comes just days ahead of the T20 Cricket World Cup, which both Du Plessis and Tahir were available for, but were ghosted and then snubbed by Cricket South Africa.

Manchester United are back in Premier League action and embark on a new journey in light of Ole Gunnar Solskjaer’s dismissal against Premier League leaders Chelsea. A week is a ... Read more »

Tottenham boss Antonio Conte is enjoying being back in the Premier League despite the situation he inherited at his new club. Conte laid bare just how big a job he ... Read more »

© ES Composite PLLiverpoolSouthampton2122.jpg Southampton are next up for Liverpool on Saturday as the Merseyside giants look to continue their fine form at Anfield. Indeed, Jurgen Klopp’s side have recovered ... Read more »

© GETTY IMAGES Vaughan was named in the Yorkshire report by ex team-mate Rafiq – GETTY IMAGES Michael Vaughan said he is “sorry” for the pain Azeem Rafiq has experienced ... Read more »

Michael Vaughan has apologised for the pain Azeem Rafiq has experienced amid his former Yorkshire team-mate’s allegations of racism. Rafiq told MPs earlier this month of the “inhuman” treatment he ... Read more »

© Provided by SPIN.ph ZHOU Qi led China to a dominant 79-63 trumping of Japan in the 2023 Fiba World Cup Asian qualifiers on Saturday at Xebio Arena in Sendai. ... Read more »

© Provided by dw.com The advice and evidence is clear: Children in the 5-11 age group should be vaccinated The European Medicines Agency (EMA) on Thursday gave its official recommendation ... Read more »

© ES Composite ArsenalPredictedXISmithRowev1.jpg Arsenal take on Newcastle this lunchtime with Kieran Tierney and Martin Odegaard both pushing for starts. The pair, who have struggled with injuries this season, were ... Read more »

© ES Composite LiverpoolPredictedXIv2.jpg Liverpool look to carry their strong post-international break form into a clash with Southampton at Anfield on Saturday. Where their defence had looked somewhat shaky prior ... Read more »

Ben Simmons feels people with the Sixers weren't loyal to him

What’s the buzz on Twitter? Tom Moore @TomMoorePhilly #NBA column: If the #Sixers don’t trade Ben Simmons this season, would a few tweaks at the deadline be enough to help ... Read more »

© Provided by News18 Following a war of words between Vikas Patil and Vishal Nikam during the captaincy task on Bigg Boss Marathi season 3, netizens have backed the former ... Read more »

© Provided by Football FanCast hasenhuttl southampton Southampton have yet another away clash on their hands today against Liverpool after losing 2-1 to Norwich City at Carrow Road last weekend. ... Read more »

© ES Composite PLArsenalNewcastle2122.jpg Arsenal will look to kickstart a fresh unbeaten run against Newcastle on Saturday lunchtime after having their ten-game streak ended by Liverpool last weekend. On paper, ... Read more »

Dimitar Berbatov was the toast of Old Trafford after scoring five times in a 7-1 demolition of Blackburn Rovers on this day 11 years ago. The Bulgarian striker had been ... Read more »

Ultimately, if you throw enough nonsense at a wall, eventually something will stick and make complete sense. After the best part of a decade of glorious mismanagement, Manchester United appear ... Read more »

Ian Wright believes Manchester United could be dealt another heavy defeat when they face Chelsea this weekend. United head to Stamford Bridge amid the imminent arrival of Ralf Rangnick as ... Read more »

Carney Chukwuemeka is regarded as the best talent from Aston Villa’s academy and one of the best young players in Europe, so the Guardian revealing he ‘will not sign’ a ... Read more »

© Provided by Independent Online (IOL) Durban – Weak-willed World Rugby has given Wallabies coach Dave Rennie nothing more than a slap on the wrists for his scathing attack on ... Read more »

BREAKING: Under-fire PSL coach on ‘sick leave', next to be sacked?

Where are they now? Granovskaia's first 10 signings as Chelsea director

"Think they will try and get...": Journalist drops West Ham transfer claim after major update

'Would be a big coup', 'Yes, yes, yes' - Many Spurs fans erupt as 'monster' rumour emerges