Dominick Cruz isn’t sure why some fighters are stepping away from MMA with a zero in the loss column, especially if they didn’t completely test themselves throughout their careers. 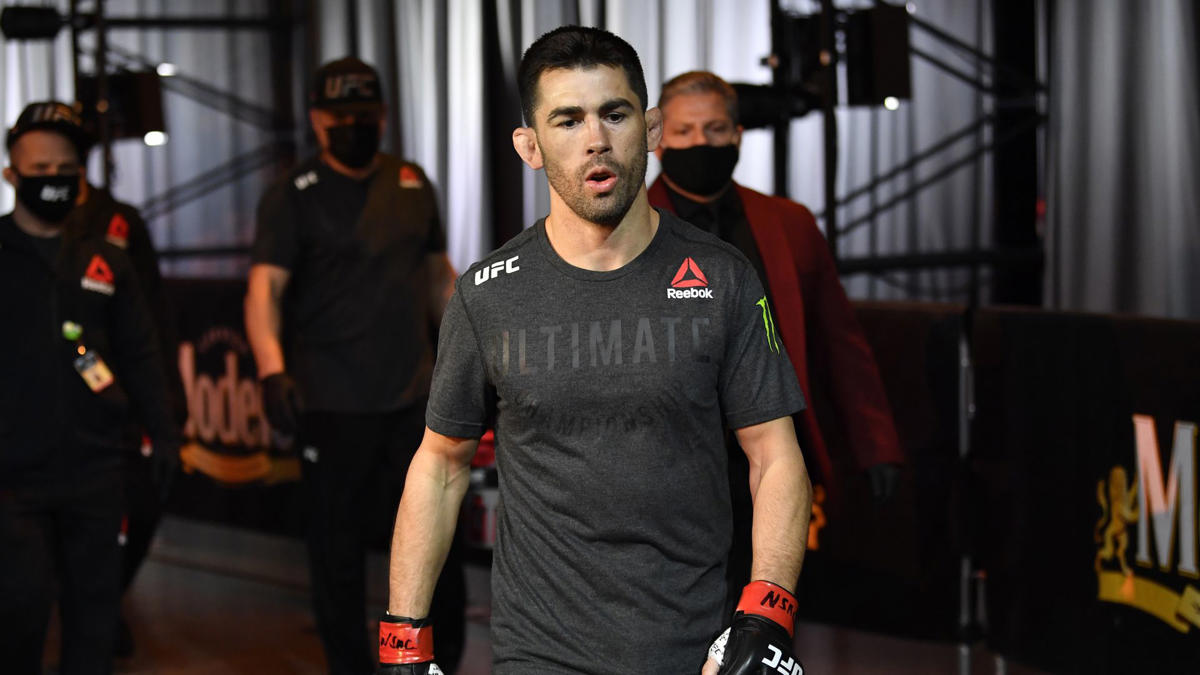 Not too my fighters have the record to retire undefeated but it does happen. Just look at former UFC lightweight champion Khabib Nurmagomedov, who stepped away from MMA in the prime of his career less than one year ago. The death of Khabib’s father certainly fueled the Russian’s departure from UFC, but “Eagle” didn’t exactly clean house before he left. Khabib was 13-0 under the UFC banner, but he retired after defending his 155-pound title just three times. So much more could have unfolded if Nurmagomedov stuck around.

Cruz, who is considered the best bantamweight champion in UFC history, doesn’t understand why some of these fighters are walking away with so much left in the tank. The former UFC champ has experienced one of the most up-and-down careers you can have in MMA thanks to countless injuries over the past decade. If anyone was going to reflect on prolonging a career it would be Cruz because he’s hung around through it all.

“I look at this whole sport from a completely different frame of mind these days than I ever looked at before. Because I’ve had to rewrite my belief systems as I’ve won and lost, won and lost,” said Cruz during a recent appearance on the MMA Hour.

“That’s one of the reasons I’m here. I’d never felt that much loss two years in my life. And then to come back and win again after feeling that loss… there’s no understanding of yourself like that.

“So any athlete who left the sport undefeated, I question: Are you really undefeated? Or did you not challenge yourself as hard as you could’ve? And if you did, what would it look like on the other side?

“Anybody who leaves undefeated in this sport, I get it, you’re undefeated. But are you undefeated? Or could you have just pushed a little harder to get that next level? And get that loss and then come back and reclaim the loss with a win and see what your next level, what your next evolution in life is.”

Cruz, who began his UFC career with a 5-0 record only to lose two out of his last three Octagon appearances, believes that a loss helps build character. It certainly takes a lot to create an undefeated record in MMA, let alone UFC, but Cruz feels that defeat really helps a fighter understand what they are made of.

“Because when it happens… the question is when it does happen, what are you gonna do with it? Are you gonna just give up and say, ‘I’m retired, I didn’t quit’? Or are you gonna get back on the horse and see what else you can be? See what you can get through. See what it looks like on the other side.

“I was fortunate enough to have that experience and be that, and I’m still on that ride. And let’s see what comes next.”

Cruz will have his opportunity to continue his road back to redemption when he meets Pedro Munhoz at UFC 269 this December. It will be Cruz’s chance to win back-to-back fights for the first time since 2016.

Trevor Zegras' alley-oop, over-the-goalie pass from behind the net produces incredible goal for Ducks vs. Sabres

South Korea hospitals under pressure as record 7,175 Covid cases in a day

ST. PETERSBURG, Fla. (AP) — Ash Barty’s Wimbledon title and hold on the No. 1 ranking helped her win WTA Player of the Year for the second time in voting ... Read more »

NEW YORK (AP) — Sometimes, it’s lonely at the top. © Provided by The Canadian Press Except for the latest AP Pro32 poll. The top five teams are all quite ... Read more »

OTTAWA — Military police have laid criminal charges against the Canadian Armed Forces’ former head of human resources despite the Liberal government having said it would transfer the investigation and ... Read more »

© The Canadian Press/Jacques Boissinot Quebec Health Minister Christian Dubé, right, says he is counting on Quebecers to be responsible and use their judgment as restrictions on indoor gatherings are ... Read more »

Erin O'Toole is going down swinging—at his own party

Après Justin, qui? In Maclean’s, Paul Wells observes a new subject in Liberal Ottawa—people are suddenly discussing a future after the current Prime Minister is no longer in the job. © ... Read more »

© Provided by Mid-Day Bianca Andreescu, the 2019 US Open champion, will take a mental break from tennis and sit out the start of next season, including the Australian Open, ... Read more »

© Provided by National Post Finance Minister Chrystia Freeland is due to table her fall fiscal update next week. A new report into Ottawa’s spending by the Parliamentary Budget Office ... Read more »

Ciara is sharing her family love in new photos. © Photo: @ciara/Instagram Ciara and her children Sienna and Future The musician posted two adorable selfies with her children to Instagram ... Read more »

© Provided by Mid-Day This is the hardest Ashes series to decipher. First, there are the controversies to be assessed on both sides; the Tim Paine crisis and the Azeem ... Read more »

© Daniel Morel/Canadian Press, AP Canadian peacekeepers prepare for a parade at Maple Leaf Camp in Port-au-Prince on Nov. 28,1997. Canada quietly committed on the world stage today to a ... Read more »

Ant Anstead is celebrating the holidays with his family — and, by the looks of it, girlfriend Renée Zellweger. © Photo: VALERIE MACON/AFP via Getty Images Ant Anstead On Monday, ... Read more »

© Provided by National Post Liberal House Leader Mark Holland. OTTAWA – The Liberals are opposing a Conservative plan for a new committee to examine Canada’s withdrawal from Afghanistan. The ... Read more »

There’s no one better at busting one’s chops than an older brother, and Chris Hemsworth is downright masterful at it. © Getty Images Liam Hemsworth, Chris Hemsworth The “Thor: Love ... Read more »

Officials with the Middlesex-London Health Unit have confirmed the presence of the new Omicron COVID-19 variant in the region. © Matthew Trevithick/980 CFPL The London, Ont., skyline, November 2020. It ... Read more »

Why is Canada playing in the 2022 Beijing Olympics?

Atlantic Canada is in the middle of a stormy pattern this week, with one low pushing across the region through Tuesday, bringing potentially damaging winds exceeding 100 km/h in Newfoundland. ... Read more »

MONTREAL — Quebec’s liquor corporation is set to resume negotiations Wednesday with the union representing warehouse workers after they overwhelmingly rejected a deal for a new contract. © Provided by ... Read more »

The Toronto Raptors have been hit hard by the injury bug this season, and it seems the team’s infirmary will stay busy for a little while longer. Toronto will reportedly ... Read more »

A 31-year-old man from Ottawa is facing charges after a multi-year cross-border investigation into cyber attacks against governments, businesses and individuals in the United States and Canada. © Getty Creative ... Read more »

EDMONTON — Alberta’s total number of Omicron variant COVID-19 cases remains at 11, but the province’s chief medical officer of health expects that number to grow. © Provided by The ... Read more »

Brian Kelly now has an important hole to fill on his roster. LSU starting quarterback Max Johnson announced Tuesday evening on Twitter that he will be entering the transfer portal. ... Read more »

The 20 Best Christmas Gifts for Writers

© Product Photo Courtesy of Amazon Writing is a notoriously solitary and challenging task, which is why many great writers are known for being curmudgeonly, crazy, or both. If you’re ... Read more »

NASSAU, Bahamas (AP) — Tiger Woods kept everyone guessing at the Hero World Challenge with weekend range sessions that got as much attention as the two eagles Viktor Hovland made ... Read more »

Patriots are back on top of AFC, after short rebuild

BOSTON (AP) — Having watched the Patriots control the division for two decades, the Bills hoped that Tom Brady’s departure would clear the way for them to climb the AFC ... Read more »

DORTMUND, Germany (AP) — Second-half substitute Erling Haaland scored twice as Borussia Dortmund signed out of the Champions League with a 5-0 rout of Turkish team Beşiktaş in their final ... Read more »

BEIJING — Stocks rose broadly on Wall Street Tuesday, adding to the market’s solid gains from a day earlier, as investors wager that the new variant of the COVID-19 virus ... Read more »

The shot has been replayed millions of times already on video and social platforms. And considering it was from the stands before a game, it obviously didn’t even count. © ... Read more »

Bills appear in denial as playoff hopes begin to sink

ORCHARD PARK, N.Y. (AP) — The Buffalo Bills appear to be in denial identifying their shortcomings and the challenges ahead in staying afloat in the AFC playoff picture. © Provided ... Read more »

WASHINGTON (AP) — The leaders of the House committee investigating the Jan. 6 Capitol insurrection are threatening to hold former White House chief of staff Mark Meadows in contempt of ... Read more »

Portland Trail Blazers guard CJ McCollum was diagnosed with a pneumothorax (collapsed right lung) and will be out indefinitely, the team announced on Tuesday. McCollum sustained the injury in the ... Read more »

Australia Joins US In Diplomatic Boycott Of 2022 Beijing Winter Olympics

Is there a coal ash pond near you? Check this map.

Shopping for a Fitness Fanatic? Here Are 45 of the Best Fitness Gift Ideas for Him, for Her, (and for You)

Exclusive! English cricket will have to look at it seriously: Brian Lara on Azeem Rafiq's racism allegations

U.S. ambassador to Canada expects countries to be ‘aligned' over Beijing Olympics boycott

All aboard: Steeler newcomers scramble to catch moving train