The arrival of money was never going to bring about a new era of normality at Newcastle United.

Take last Friday. It started with Eddie Howe confirming the squad would jet off for a training camp in Saudi Arabia this week.

The head coach was very quickly fielding questions on human rights and whether he would be shaking hands with Crown Prince Mohammed bin Salman, in between bouncers about his return of one win in 10 matches and failed pursuit of key transfer targets.

Come midday, Amnesty International and MPs were criticising the notion of the Saudi trip being a ‘football decision’, as Howe put it. It was, they said, blatant ‘sportswashing’.

By tea-time, news was landing of Newcastle’s former owner, Mike Ashley, suing one of the current custodians, Amanda Staveley, over a £10million loan she used to help complete the takeover.

Had anyone mentioned Newcastle were playing at Leeds the following day? If ever a result was needed to calm the racket around the club, this was it.

Howe will insist his sole concern is the performance behind a deserved victory that takes his team one point from safety. Another defeat ahead of a 17-day break, and amid the controversy of the Saudi visit, would have dialled up the noise to an unhelpful level. 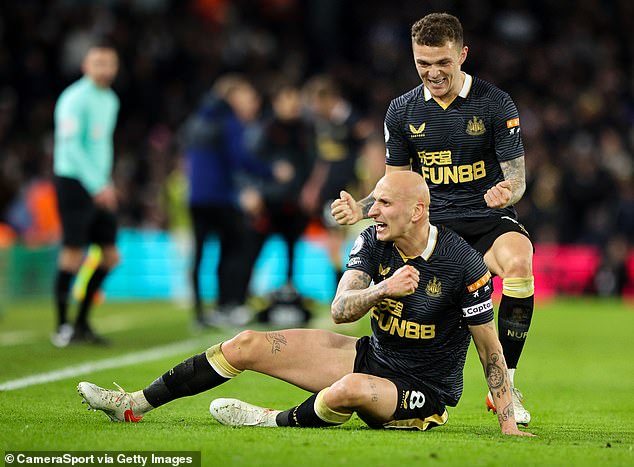 Attention will remain, of course. One win — just their second in 21 league matches — should not give rise to talk of all being well and Newcastle being set to survive.

The owners still have to deliver a new centre back and central midfielder this week. If not, focus will return to their decision to enter this month without a director of football or chief executive.

But one call they did get right was Howe. Debate has raged on Tyneside and beyond in the past fortnight as to whether he has brought about any improvement since replacing Steve Bruce in early November.


He has, and this gutsy win was evidence of it. When the second half descended into a chaotic test of fitness and resilience, Newcastle won. They would not have done earlier in the season.

Jonjo Shelvey’s free-kick was the difference, fumbled in by Illan Meslier, but the visitors were worthy victors. Howe, though, needs a lot longer than two months to reverse two years of gradual decline.

Days like this will buy him that time, for talk of betterment starts to sound hollow without results.

For Leeds, it was as if they lost faith in their ability to score after a period of early domination. Marcelo Bielsa says he has ‘doubts’ about striker Patrick Bamford returning from injury for their next game at Aston Villa on February 9, and the programme notes of managing director Angus Kinnear suggested new signings will not be forthcoming.