The hits just keep on coming for the Dallas Cowboys. Rookie cornerback Nahshon Wright, a third-round pick, has been added to the Reserve/COVID list and will miss the Cowboys’ matchup Thursday night with the New Orleans Saints. He joins right tackle Terence Steele and head coach Mike McCarthy as the most recent members of the organization to contract the virus. 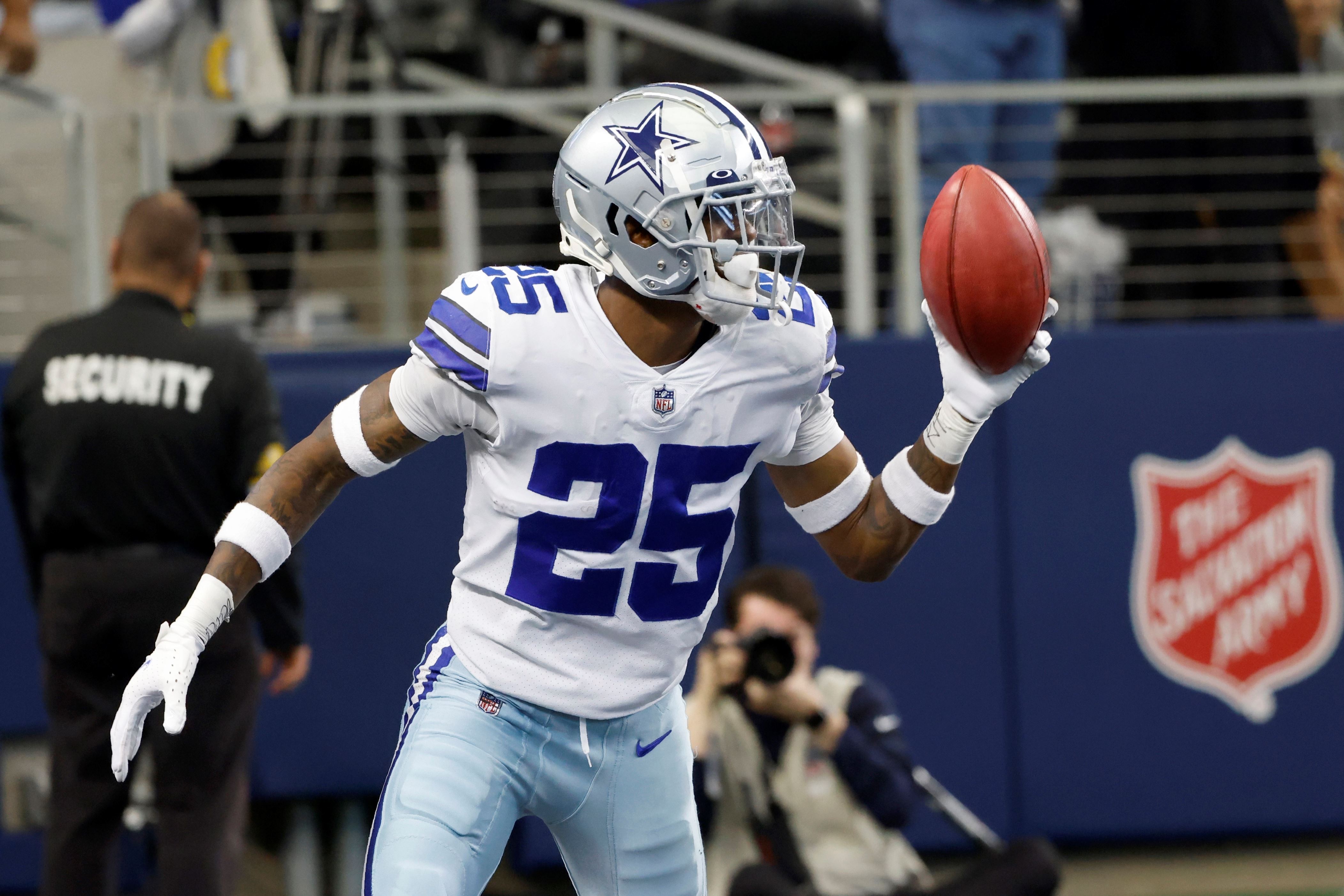 Wright has appeared in 10 games this season, logging five defensive snaps as and 208 on special teams. That’s where he had his only impact play of the season against the Atlanta Falcons in Week 10. Wright recovered a punt that was blocked by defensive end Dorance Armstrong for a touchdown in the Cowboys’ 43-3 blowout win.

The former Oregon State Beaver will now enter into a 10-day quarantine and will have to have two negative tests within 24 hours of each other to return to the team.

With the Cowboys looking to get past a recent slump, they certainly hope Wright is the last player to get COVID for the foreseeable future.

Cowboys’ Micah Parsons isn’t surprised by his play, ready for primetime vs Saints

Meat Loaf dies aged 74: Bat Out Of Hell singer passes away with his wife Deborah by his side

'I see a gentleman who looks very similar to the suspect in the Kupfer stabbing': police release audio of the 911 call that led to the arrest of Shawn Laval Smith in Pasadena

Watford vs Norwich live stream: How to watch Premier League fixture online and on TV tonight

© Photo by Harold Cunningham/FIFA It was a big week in the world of Bayern Munich as Robert Lewandowski received a big honor and we received contract news on Serge ... Read more »

Keifer Sykes, getting an extended opportunity with Indiana’s starting backcourt out of action, contributed five points to a 10-0 burst in overtime that allowed the short-handed Pacers to shock the ... Read more »

Tonga has turned back an aid flight from Australia due to a positive Covid case on board, despite assurances from the Morrison government that humanitarian relief from the volcanic eruption ... Read more »

Antony Blinken issued warning to Russia after meeting NATO allies in Berlin He made it clear there would be 'consequences' if 'any' Russian troops moved into Ukraine, a slap-down to Joe Biden's talk of 'minor incursions' Blinken then flew to Geneva, where he will today meet with Russian counterpart Fears are growing that Putin is planning a full-scale invasion of Ukraine  Read more »

WARNING: DISTRESSING CONTENT Deadly crash was captured live on air as motorcyclist fled at nearly 100mphPolice say the motorcycle was reported stolen, but officers did not pursue itNevertheless the rider fled at dangerous speeds and crashed into a car head-onShocked news anchor gasped in horror as the camera cut away from the scene Read more »

What the papers say Newcastle have made a second loan offer for Manchester United’s Jesse Lingard after a first offer for the 29-year-old midfielder was reportedly knocked back on Wednesday, ... Read more »

Looking for solutions to improve the NHL All-Star Game

© Mark J. Rebilas-USA TODAY Sports The NHL All-Star game should feature the best players in the world. But I’m sick of hearing the complaining every year about who’s been ... Read more »

FIFA president Gianni Infantino vows to prioritise player welfare as he looks to reshape the international calendar amid rising demands put on top-level stars... while biennial World Cup plans were discussed but not the 'main topic'

Novak Djokovic's coach has broken his silence on the tennis star's deportationMarian Vajda slammed immigration action was 'political, unjust, and unhealthy'He said Djokovic being deported on grounds of 'civil unrest' were unfoundedMr Vajda vowed Djokovic would return to the court despite vaccine mandates  Read more »

TSM: You have to appreciate the little victories

© Photo by Zak Krill/NHLI via Getty Images For our new readers and members, the Top Six Minutes is a continuation of the discussion in the game thread. We try ... Read more »

Bob Goalby, who won the 1968 Masters after Roberto De Vicenzo's infamous scorecard flub, dies at 92 as golfing greats pay homage to a 'leader' who helped pioneer the game

Bob Goalby, who won the 1968 Masters after a scorecard flub, has died at 92Goalby's death in Illinois, was confirmed by the PGA Tour and his familyHe is best remembered for how he was declared the Masters championThe American was equally known for the role he played in launching two tours Read more »

Aston Villa owners Nassef Sawiris and Wes Edens have reportedly entered into an ‘exclusive negotiating agreement’ with Major League Soccer in their bid to own the league’s 30th franchise. The ... Read more »

FSG have problem in £8bn empire that Liverpool need solving

Celebrity Gogglebox star Eddie Boxshall has warned fans not to “believe everything you read” amid his split from Denise Van Outen. The commodities trader had been dating actor Van Outen ... Read more »

'No more political witch hunts!': Trump hits back at Georgia district attorney for requesting grand jury in her probe of whether ex-president and his allies tried to interfere in the state's 2020 election count

Trump claimed his January 2020 phone call with Georgia State Secretary Brad Raffensperger, a main point in the probe, was 'perfect' in a Thursday statementHe compared the call to his infamous conversation with Ukraine's President Volodymyr Zelensky that was at the heart of his first impeachment trialHe suggested a grand jury should instead be convened to investigate 'large scale voter fraud' in GeorgiaFulton County District Attorney Fani Willis has indicated that Raffensperger will not cooperate with her investigation at the momentGrand juries can issue subpoenas compelling witnesses to testify in probes  Read more »

Schools in open revolt over masks: More than 100 headteachers write to parents saying face coverings MUST stay as they blame staff shortages or Covid cases – but government CAN'T do anything to stop them

Schools across England are in open rebellion against Government over masks More than 100 head teachers have said children must still wear face coveringsIt also emerged that the Government can't do anything to stop schools Teaching unions are threatening to derail PM’s easing of Covid restrictionsEmbattled Tory leader is accused of making decision to save his own career The National Education Union warned against lifting Omicron curbs ‘too quickly’ Has your child been sent home for refusing to wear a mask? Email: jack.wright@mailonline.co.uk  Read more »

A multi-million pound property has just come on the market – and you wouldn’t believe it’s in the north west. This incredible development looks like something you’d typically see on ... Read more »

The 5G network went on line on Wednesday, except in areas around certain vulnerable airports such as Boston and MemphisThe communications companies - Verizon and AT&T - were furious that they were unable to complete their rollout as plannedAirlines were also furious, saying that they had not been adequately prepared for 5G, which they fear could interfere with their automated landing systemsOn Wednesday only 48 percent of flights were cleared to take off; the rest were rescheduled On Thursday the heads of American Airlines and United said that they were confident the issue could be resolvedTheir assurances run contrary to the remarks of the Emirates president, who said on Wednesday it was a disasterSir Tim Clark called the episode 'one of the most delinquent, utterly irresponsible issues, I've seen in my aviation career'American Airlines and United are among the U.S. carriers to benefit from lucrative federal contracts, worth $1.1 billion for 2012-22  Read more »

Stanislas Wawrinka news: On this day in 2014, the Swiss roar at the Australian Open

Trump lashed out at President Joe Biden again in an interview on Thursday following Biden's press conferenceSuggested Biden was in cognitive decline saying his press conference was not a 'normal situation'Trump slammed the president over inflation, Russia tensions, and the Afghan withdrawalSaid Biden gave Russia a 'green light' to invade Ukraine in bumbling remarks about a 'minor incursion' Read more »

Back in October, the Pittsburgh Steelers sent a fifth-round pick to the Seattle Seahawks for cornerback Ahkello Witherspoon. He several weeks on the bench before finding his way into the ... Read more »

Stephen Curry with a deep 3 vs the Indiana Pacers

He was always a fan of spirits! George Best's ex-wife claims footage has ‘captured his ghost' which is haunting her home - after his biography suddenly moved on CCTV

The rush hour resumes: Commuters pack onto Tube trains at 7am as big banks and city firms reveal plans to get workers back to their desks - but civil service unions dig in their heels and accuse PM of 'reckless, headlong' return

Crying Adele postpones her Las Vegas residency due to Covid

‘Lowest of the low’

‘There is no leadership election’ – Liz Truss voices support for Johnson