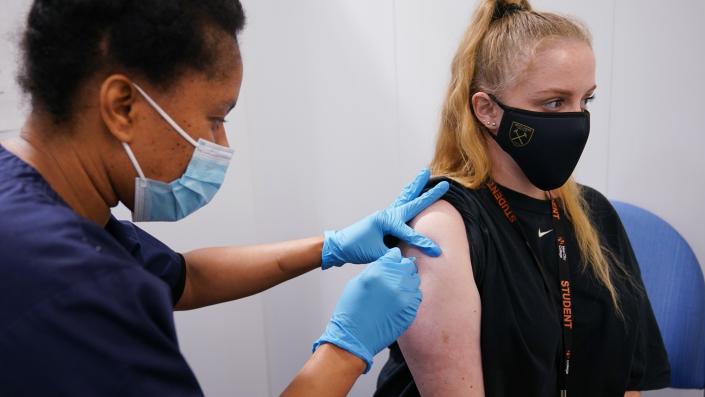 People are more able to fend off variants“>coronavirus variants if they have had Covid previously plus a vaccine, new research suggests.

US experts analysed data on people who had recovered from natural infection earlier in the pandemic and found that having a Covid vaccine enabled them to produce high-quality antibodies that could act against variants.

These antibodies were more powerful than those produced by either natural infection or vaccine alone.

The team, from the University of California Los Angeles, said the research suggested booster jabs could help against variants by “improving not only antibody quantity, but also quality”.

The study did not look specifically at the Omicron variant but adds to the body of evidence suggesting existing vaccines and boosters may offer some protection.

Writing in the journal of the American Society For Microbiology, the team said: “We confirmed that some mutations reduce the ability of antibodies to neutralise the spike protein, whether the antibodies were from past infection or vaccination.

“Upon retesting the previously infected persons after vaccination, their antibodies gained the same ability to neutralise mutated spike as the original spike, suggesting that the combination of infection and vaccination drove the production of enhanced antibodies to reach a maximal level of potency.

“Whether this can be accomplished by vaccination alone remains to be determined, but the results suggest that booster vaccinations may help improve efficacy against spike variants through improving not only antibody quantity, but also quality.”

An area of the virus spike protein called the receptor binding domain (RBD) is known to enable the Covid virus to invade a host cell.

This region is also a critical target for antibodies but random mutations in the RBD mean it is an ever-changing target.

In the new study, scientists compared anti-RBD antibodies in the blood of some people to the ability of the antibodies to neutralise the virus.

In people who had never had Covid but who had received a vaccine, antibodies were less effective against mutations in the Beta and Gamma variants than against the original Wuhan strain of the virus.

Similarly, when researchers analysed blood samples from people who had suffered Covid before May 2020 – and before the first confirmation of variants – they had reduced protection against variants.

The experts said this suggests that both mild infection and vaccines produce antibodies that still leave a person vulnerable to new variants.

However, those who suffered Covid before May 2020 and who had a vaccine a year later had antibodies that were just as potent against variants as against the original Wuhan strain.

BRIT Awards 2022: when is it and how can I watch as Adele, Ed Sheeran and Dave lead gender-neutral nominations

The map was assembled from just seven overflights in December Here's a view of the UK and Ireland you won't have seen before. The mosaic is made from imagery acquired ... Read more »

Ryan Jung wook Hong, founder and chairman of Organic (Organica)Organica, a plant-based food company based in Korea, has raised an investment of 43 billion won ($36.1 million) from CITIC Capital, ... Read more »

China‘s cyberspace regulator has drafted new guidelines that will require the country’s internet behemoths to obtain its approval before they undertake any investments or fundraisings, sources familiar with the matter ... Read more »

McAfee Enterprises and FireEye to be called Trellix post-merger

Boris Johnson is preparing to face MPs in the Commons amid claims that support among Tory MPs is “haemorrhaging away” and he is on the brink of being removed from ... Read more »

Xiaomi 11T Pro smartphone has launched in India. Dubbed HyperPhone, the company is calling the smartphone its first flagship of the year 2022. The smartphone joins the other models in ... Read more »

Delhi Health Minister Satyendar Jain on Wednesday said the government will monitor the COVID-19 situation for three to four days to confirm the trend of positivity rate before reviewing the ... Read more »

It is expected that Prime Minister Boris Johnson will announce that Plan B rules will be scrapped in England. The PM is set to update MPs on Wednesday (January 19) ... Read more »

By Baek Byung-yeul Samsung Electronics is facing growing competition with its rivals in the foundry business, as TSMC and Intel are expanding their investments in the rapidly growing, contracted semiconductor ... Read more »

SillaJen shareholders call for the trading of the biotech company’s stocks to be resumed in front of the Korea Exchange’s building on Yeouido, Seoul, Tuesday. Yonhap Final decision for biotech ... Read more »

Flipkart’s Big Saving Days sale is currently underway and will go on till January 22. If you are looking to buy a smartphone, then there’s no better time than the ... Read more »

SK ecoplant CEO Park Kyoung-il presides over an extraordinary meeting of shareholders at the company headquarters building in Seoul in this December 2021 file photo. Courtesy of SK ecoplant By ... Read more »

Karnataka Chief Minister Basavaraj Bommai on Wednesday said his government will re-examine the COVID-19 curbs that are in place, and will take a decision regarding relaxation, including the weekend curfew ... Read more »

The Supreme Court on Wednesday pulled up state governments for failing to disburse claims to the next of kin of COVID-19 victims, and issued a show cause notice to the ... Read more »

Market trade lower for second consecutive day: 6 factors that are dragging the indices

All those attending the Olympics in Beijing have to download MY2022, an app China says is to monitor Covid, but which anaylsts warn has “devastating” security flaws WASHINGTON: An app ... Read more »

Chinese smartphone shipments rebound with 15.9 per cent growth in 2021, with 5G models dominant

The smartphone market in China rebounded last year after a pandemic-induced slump in 2020, although total sales have yet to reach 2019 levels, according to the latest data from a ... Read more »

(123rf)Samsung Electronics’ obsession for foldable smartphones is drawing market concerns as the South Korean tech giant is missing out on what’s coming next: The metaverse. According to market tracker TrendForce ... Read more »

Apple iPhone 13 | Photo credit: Sahej Brar / Unsplash The launch of the iPhone 13 series in fall 2021 has once again helped Apple claim the number one spot in the global ... Read more »

A man has been jailed for keeping another man prisoner in a six-foot shed on a caravan park for more than 40 years. Peter Swailes, 56, kept a vulnerable worker ... Read more »

EXPLAINER: Why Tonga eruption was so big and what's next

The Associated PressFILE – This satellite image provided by Maxar Technologies shows an overview of Hunga Tonga Hunga Ha’apai volcano in Tonga on Jan. 6, 2022, before a huge undersea ... Read more »

A set of ancient gold and silver tubes dating to about 5,500 years ago and unearthed in North Caucasus in Russia could be the world’s oldest surviving drinking straws, experts ... Read more »

The 7 hair and nail trends you'll see at every 2022 wedding.

© Getty Images The 7 hair and nail trends you’ll see at every 2022 wedding. After another year of COVID fluffing about, there’s good news on the wedding front: they ... Read more »

Microsoft made its biggest acquisition when it forked out close to $69 billion in an all-cash deal for Activision Blizzard. One of the biggest game developers — with titles like ... Read more »

It turns out that a face mask could be the best wingman to secure your next date. A UK study has discovered that medical face masks can actually increase “facial ... Read more »

From the trailer of ‘Among Us – The Airship’ | Innersloth / YouTube screenshot “Among Us” developer Innersloth has huge plans for the game this year. The studio released its ... Read more »

SEOUL, Jan. 19 (Yonhap) — South Korea has decided to raise the minimum wage of foreign crew members on local fishing boats to the level received by their Korean colleagues ... Read more »

Covid news - live: WHO warns pandemic ‘nowhere near over' as Boris Johnson is expected to ease rules in UK

© AP CORONAVIRUS-EEUU LIVE – Updated at 05:05 The Covid-19 pandemic is far from over, the World Health Organisation chief has said, cautioning against taking the Omicron variant lightly. Dr ... Read more »

MIT researchers lay out a strategy for how universities can help the U.S. regain its place as a semiconductor superpower. Read more »

When should someone trust an AI assistant's predictions?