In a poll of 2,559 Express readers, 50 percent of voters said they would still go to Christmas parties despite fears around the Omicron spread, whilst 46 percent said they would not, and four percent were not sure. A voter nicknamed ‘Sami7’ argued that Christmas parties should go ahead “in a sensible manner”. They added: “Take a lateral flow test before attending to make sure you’re clear, then party and enjoy Christmas. It’s common sense and people need a decent Christmas after last year!”

Another reader, Bors, said: “People want to live a normal kind of life now. This is not good for your mental health, time to end it and not be governed by these silly rules.”

But their comment sparked anger amongst other Express participants.

A voter going by ‘Fin 231’ responded: “Silly rules? If people actually followed these ‘silly rules’, we would have dealt with Covid a long time ago, but no, people decided to march on the streets and cry because a mask is such an inconvenience!”

The Omicron variant appears to spread at a faster rate than previous variants, but there is not enough data yet to know whether it is more or less deadly.

A further 86 new cases of the mutation were found over the weekend, taking the total Omicron UK case figure to 246.

The current rules requiring mandatory face masks in shops and public transport, imposed in response to the arrival of Omicron, expire on Monday 20 December. 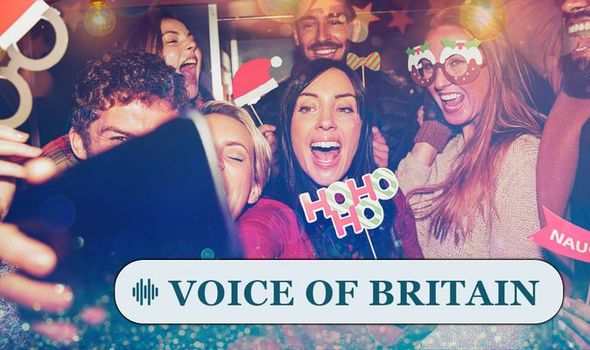 Ministers are still unsure whether they will be able to lift the rules or will have to strengthen them, for example by ordering people to work from home or introducing Covid passes at large venues.

A Downing Street source said: “We are only a week into the new restrictions, and we just don’t have the data that we need yet. It will take a week or two to know slightly more about the variant.”

Professor Sir David Spiegelhalter, a statistician at the University of Cambridge who helps advise the Government, told Sky News the new Covid strain posed a “high risk” but believes ministers are determined “not to disrupt Christmas”.

He added: “What happens after Christmas is another matter.

“The travel restrictions are only going to slow things down a little, they’re not going to stop it.

“In the New Year we’re likely to see a lot of challenges and that could mean more stringent measures.”

Boris urged to back hydrogen over electric ‘Build hydrogen stations!’

Professor Spiegelhalter said the emergence of Omicron is “appalling timing” as the festive season is “one of the highest risk periods… with a lot of indoor socialising”.

The Scientific Advisory Group for Emergencies (Sage) concluded at its most recent meeting that its previous advice on home working and Covid passes was “highly relevant” in light of Omicron, and dismissed fears that the public would refuse to obey any fresh restrictions.

But some Express readers said they would disregard government guidelines when taking part in our poll.

Olly Smyth said: “I don’t care what the government will say regarding Christmas this year. I’ve stopped listening and I’m going to do whatever I want to do.”

His comments riled other readers: ‘Cjjs’ said it’s “one thing to risk yourself, another to risk everyone else”.

Make sure you’re never left behind by receiving the biggest news of the day covering politics, royal, and finance. Sign up for the Daily Briefing alert here.

Judicial Inspectorate for Correctional Services says this is a violation of the Constitution. © Copyright (c) Daily Maverick , All Rights Reserved Inmates in solitary confinement in some South African ... Read more »

Senate Majority Leader Chuck Schumer and other Senate Democrats have reportedly started looking for ways to get rid of the filibuster. Drew Angerer/Getty Images Senate Democrats are still hunting for ... Read more »

An unvaccinated COVID-19 patient who was being kept alive on a ventilator has been transferred from Minnesota to Texas after his wife obtained a restraining order barring his doctors from ... Read more »

MAMA June’s daughter Honey Boo Boo looked unrecognizable with NO makeup as she ditched her massive fake lashes. The 16-year-old shared a new selfie on her Instagram Story on Monday. ... Read more »

MICROSOFT is continuing in its mission to make Xbox the best place to play by snapping up Activision Blizzard in a $68.7 billion deal. Announced in a blog post, Microsoft ... Read more »

WE'RE all guilty of asking a silly question from time to time. But a former Ryanair flight attendant has revealed the most stupid question she was asked during a journey ... Read more »

UK Prime Minister Boris Johnson on Tuesday “categorically” denied claims by his former chief aide that he lied to parliament about a Downing Street party held during a strict lockdown. ... Read more »

What is the Brat diet? Here's which foods to eat and when you may need it

© Provided by Woman&Home Banana on toast as part of the Brat diet plan The Brat diet has long been recommended to help those experiencing tummy issues and works by ... Read more »

One of the suspects in the racist murder of Stephen Lawrence has complained he cannot be moved to an open prison after failing to pay £90,000 he made from a ... Read more »

© Provided by Financial Post A pedestrian checks the hours of a magazine store in Montreal which was closed on Sunday because of restrictions aimed at curbing coronavirus hospitalizations. Small ... Read more »

Expert choice We all covet those little rectangles in our pockets. Smartphones play a massive part in our day-to-day lives, but buying the perfect smartphone can be an arduous task. ... Read more »

Even an early exit from the Australian Open wasn’t enough to turn Liam Broady against first-round foe Nick Kyrgios despite his mid-match antics, although the Brit admitted his opponent made ... Read more »

Five times Richard Bland has lost his European Tour card, and five times he has won it back. Coming off the back of a brilliant year where he became the ... Read more »

© Provided by The Guardian Photograph: Jérôme Favre/EPA The government has unveiled plans to crack down on misleading cryptocurrency ads by making them subject to the same regulations as marketing ... Read more »

BlackRock's Larry Fink says the next 1,000 unicorns will be sustainable companies that make energy affordable — not more search engines or social-media titans