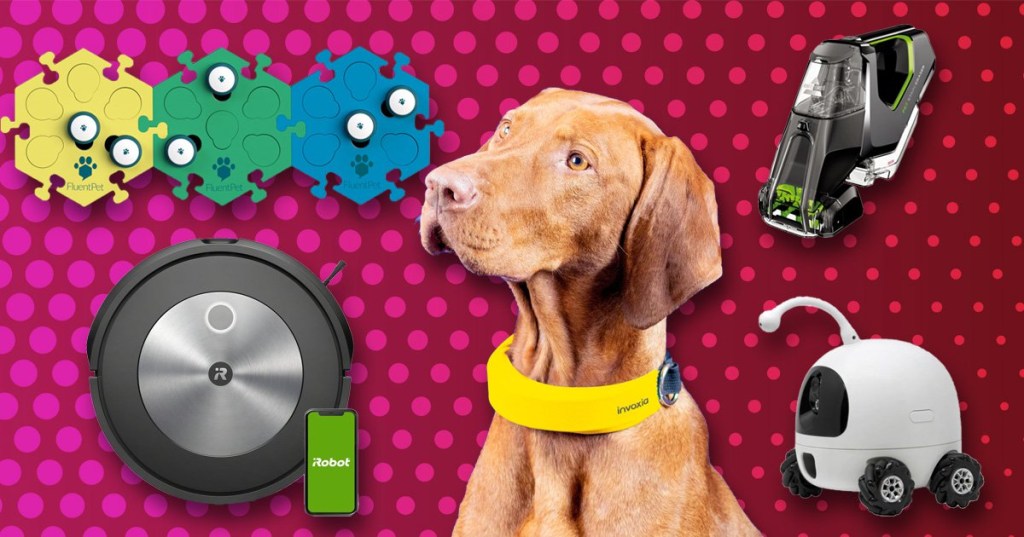 If you’re all about making sure you’re kitted out with the latest tech, why not get your pets in on a slice of the action?

Keep them entertained with robot companions and digital toys, or even teach them to talk with a very clever communication system.

Or keep track of their health with smart sleep and health trackers or food bowls that keeps portion size under control.

And seeing as pets can be pretty mucky, you might also want to check out the smart cleaners that can tackle the mess they leave behind.

Here are the pet-friendly gadgets that impressed us the most:

It’s like an Apple Watch for dogs (Picture: Invoxia)

By monitoring your dog’s vital signs, including tracking both respiratory and heart rates, this clever collar is essentially an Apple Watch for dogs – and it’s one of the few products out there to do this.

Invoxia has even partnered with veterinary cardiologists to develop a deep-
learning AI that relies on miniaturised radar sensors to take readings, no matter how hairy they are.

Prioritising your pooch’s health also means signing up to a monthly subscription to take advantage of its GPS features.

What a good boy (Picture: Cheerble)

To paraphrase popular nursery rhyme This Old Man, knick-knack paddywhack, give a dog an interactive bone.

That’s the thinking behind this automated digital dog toy that you can control with the assistance of an app.

Choose from one of nine interactive motions to keep your pup occupied or take manual control to roll it back and forth, get it to spin, turn and hop, or drive it and play a game of chase.

Ideal for providing entertainment while you work nearby.

To keep those pet-related distractions to a minimum, this interactive toy, complete with two darting red-dot lasers that rotate 360 degrees, will keep kitty entertained for hours of hands-free fun as it chases after the elusive laser dot.

Cats aren’t exactly known for cleaning up their business.

But this clever self-cleaning kitty litter system stores waste in a sealed space using an ozone generator and UV light to inhibit bacterial growth so you don’t have to smell what they’ve been up to.

Alongside infrared and gravity sensors, to automatically pause operation when your pet is close by, it’s thoughtfully engineered from your cat’s perspective, while automating the least pleasant part of pet parenting.

Obesity continues to be a major concern for pets and their owners, with a lack of daily exercise and overfeeding the main culprits.

Keep tabs on your fur ball’s waistline with this anti-bacterial dog bowl, which features an integrated weighing scale and accompanying app that recommends serving sizes based on their weight, age and food type.

This way you make sure you don’t overfeed them no matter how many times they try to manipulate you with those puppy eyes.

This pet-friendly bot, with its sights set on tackling pet hair, comes with a self-emptying base and advanced obstacle avoidance technology – and is well worth a look in.

iRobot is so confident in its technology that it comes with a POOP (Pet Owner Official Promise) guarantee, which essentially means that if it fails to avoid rolling over pet poo, you’ll get a free replacement.

Armed with powerful, carpet-friendly omnidirectional wheels, a camera, an alien-like tentacle-cum-laser attachment and the ability to spit out treats on demand, this app-controlled digital cyclops is the perfect plaything for your pets.

Fire up your phone to keep tabs on your furry friends when they’re home alone and keep them entertained by remotely rolling it around the house, reducing your pet’s anxiety levels and increasing its exercise levels in the process.

The automated voice doesn’t have to be quite that weird… (Picture: Wopet)

This one offers app control to manually or automatically manage meal time and program portion control up to 15 portions a day.

You can even record an automated voice note to summon your pets for feeding if you’re running late.

Now, if only they’d make one for humans…

As it’s equipped with two-way audio, you can keep your pet company when you’re not home or schedule a time to trigger its auto-cruise and motion-detection features, alerting you if anything suspicious appears in its FOV, even in the dark, via the free Ebo App.

While it does the rounds, facial recognition identifies the faces of people and pets to follow them around and automatically take pictures or video like some kind of personal pet paparazzo.

Pet beds don’t get much smarter than this. Infrared sensors let you know when your hairy companion climbs in, allowing the bed to monitor how long they spend in the land of Nod, with data recorded into an in-app calendar.

Throw in wind path temperature and humidity sensors to let you monitor conditions inside your home and you might end up trying to squeeze into this thing for a decent night’s sleep.

YouGov research has revealed that 60% of dog owners feel guilty when they leave their furry friend on their lonesome.

This one automatically pans, tilts and tracks your four-legged friends, has night vision and lets you set activity zones for motion alerts.

There’s even two-way audio so you can talk to your pet or whoever happens to be in shot.

Ever wanted to know what your dog was thinking? Now you can (Picture: FluentPet)

There probably isn’t a dog owner alive who doesn’t wish their hairy companion could talk.

That’s the thinking behind this ambitious FluentPet system that’s made up of hexagonal tiles or HexTiles, each with a set of buttons for teaching your dog to express itself using human vocabulary.

Each button is customised to say different words such as ‘outside’ or ‘play’ when pressed.

It will require a lot of patience, repetition and close observation but once training’s kicked in, you’ll be able to communicate with your four-legged friend.

Mystery stains appearing on your carpet or upholstery is something many pet owners will be all too familiar with.

As the name implies, the sole aim of this grab-and-go cordless cleaner is to get rid of mini mishaps.

Just spray the stain, drag the device across the spot and watch, with your jaw slightly ajar, as it pulls up dirt from carpets, upholstery, stair runners, rugs and even car interiors.

This article contains affiliate links. We may earn a small commission on purchases made through one of these links but this never influences our experts’ opinions. Products are tested and reviewed independently of commercial initiatives.