Usman, who won his fight with Patrik Pietila at Bellator 269 last night, is ranked at number seven in the lightweight division, while Queally is currently sat at number four and fights for the vacant title next month in Dublin.

And a prospective match-up between the two could end up pitting McGregor directly against Nurmagomedov for the first time since their heated 2018 battle.

McGregor and Queally are close friends dating back to the days when the Dublin native was fighting on the regional scene in Ireland, while Khabib corners his cousin Usman since retiring from competition last year. 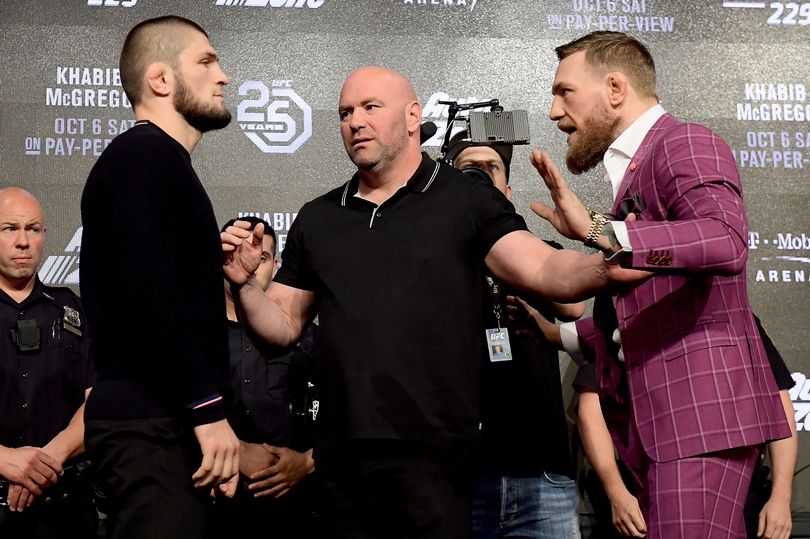 Queally will face Patricky ‘Pitbull’ Freire for a second time at Bellator 270 in Dublin’s 3Arena, and could end up facing Nurmagomedov in his first title defence should he win the belt in his home country.

And the Russian has vowed to “smash” Queally should the pair ever meet inside the cage.

When he was asked during a post-fight press conference last night about the potential of a fight with Queally, he replied: “ Fighting him – no, but smashing him would be interesting.”

He proceeded to tell reporters that he isn’t interested in calling out any specific opponents, but admitted that he would like a top ten opponent after taking on the unranked Pietila at a catchweight.

Would you like to see Usman Nurmagomedov fight Peter Queally? Let us know in the comments section!

“Bellator give me someone from the top 10, because the amount of haters is increasing.

“To be honest, I don’t really follow any opponents [to call out].

“I would fight anybody from the top 15 – anybody they will give me. I really don’t care.

“I can’t give you any particular names – I just don’t follow them that much.”

Khabib was in attendance at the event to corner his cousin, and likely would be in attendance for a prospective bout between Usman and Queally.

And McGregor is a regular attendee and Queally’s fights, often sitting in the front row to show his support, although he generally leaves the corner work to SBG Ireland head coach John Kavanagh.

It would be the first time that Nurmagomedov and McGregor have been in the same room since their UFC 229 meeting, which ended in a brawl between both teams after the Russian submitted the Irishman in the fourth round.

The bout ended up drawing in the most pay-per-view sales in the history of MMA, with over 2.4million fans tuning in to watch the years of bad blood between the pair culminate.

And the rivalry hasn’t ended since, with two close calls this year almost putting them face-to-face in Dubai and Los Angeles save for a few minutes in both cases.

He brutally stopped Tim Johnson in the first round despite weighing in over 30 lbs, more than two-stone, lighter than his opponent, and will likely end his career in America.

Video: Watford fan is stable in hospital after suffering a cardiac arrest and receiving CPR in Vicarage Road stands with Premier League clash against Chelsea suspended for 35 minutes

Video: Macron calls Boris a CLOWN: President branded Johnson a 'good-for-nothing' and slammed his conduct in the sausage wars, fishing row and submarine affair - according to respected French magazine

Delta Goodrem reveals she's glad the Omicron Covid strain has taken over the headlines... after her name was used for an earlier variant

Video: No 'snogging under the mistletoe' says cabinet minister: Pensions secretary Therese Coffey tells Christmas revellers to keep their distance from each other in MORE mixed messaging from government

Ralf Rangnick will soon start his new job at Old Trafford and discover the monumental task he has on his hands. The Red Devils have struggled this season despite having ... Read more »

Marcus Stroman announced his signing with the Cubs on Twitter. Now the real work begins as the pitcher looks to lead the Chicago rotation immediately. © Provided by Fansided The ... Read more »

Marcel Brands was involved in a heated exchange with an Everton supporter after Wednesday evening’s Merseyside derby defeat to Liverpool. Rafa Benitez’s side were well beaten at Goodison Park and ... Read more »

© Provided by Dot Esports Winter is here, which means Dota 2 players have a lot to look forward to, such as new content coming as part of the Dota ... Read more »

© Provided by Dot Esports Ahead of its launch on Friday, all of Pokémon OCG VMAX Climax secret rare cards have all leaked online. Thanks to a post by Pokebeach, ... Read more »

© Provided by MalaysiaNow The Election Commission (EC) today said the lowering of the minimum age for voting and automatic voter registration will not be implemented for the upcoming state ... Read more »

A Cabinet minister said she was “surprised” and “disappointed” at reports French President Emmanuel Macron had branded Boris Johnson a “clown”. Work and Pensions Secretary Therese Coffey was responding to ... Read more »

A political staffer who had a consensual love affair with a minister when both were married has claimed she has only ever told a ‘small part’ of their story.  Rachelle ... Read more »

The rich postcodes where motorists are more likely to own an electric car - and YOUR taxes are funding their $5,540 subsidy

Electric car motorists can get up $5,540 in NSW for vehicle worth up to $68,750They are spared from paying stamp duty on electric vehicle up to $78,000 New government data shows benefits going to wealthier Sydney postcodes  Read more »

Well-connected political insider claims Gladys Berejiklian IS talking about a shock return to politics - but NOT with her frenemy Scott Morrison... and says the pressure to become 'the first female Liberal PM may be too great to resist'

Video: 'I'll kick your f**king a**…stupid dog': Indiana cop is slammed over video showing him KICKING 'hero Boston terrier that scared off burglar' - but PD insists video is misleading and says officer did nothing wrong

Princes William and Harry AVOID each other while holding ‘joint' event with Diana Award winners: Duke of Cambridge meets face-to-face with people given gongs honouring his mother - while Duke of Sussex stays in California and meets DIFFERENT people on Zoom

Video: Lady Gaga opens up about her first acting role in an episode of The Sopranos as a teenager: 'I can see exactly what I did wrong'

Elizabeth Hurley, 56, slips into another racy Versace dress for sizzling shoot - 27 years after wowing in THAT safety pin dress