WESTFIELD, Ind. — Colts quarterback Carson Wentz is being held out of the team’s third practice of training camp due to a foot injury, according to the team.

Wentz had participated in the first two practices of training camp, but he sat out the team’s final drill, giving way to Jacob Eason for the entirety of the final drill. Wentz did not leave the field before the end of practice.

Colts offensive coordinator Marcus Brady said doctors are still evaluating “what the next move is and how bad it is.” Wentz feeling “twinge” in his foot, according to Brady.

Indianapolis is also missing Quenton Nelson, T.Y. Hilton and Jack Doyle on the third day of camp, but those three players are merely being given rest days.

Wentz dealt with injuries throughout his career in Philadelphia.

The quarterback suffered a broken wrist in college in 2015 and had a rib injury in 2016, though he didn’t miss any games. Wentz tore his anterior cruciate ligament in 2017, missing the final 3 games of the regular season and the team’s run to the Super Bowl. He missed the first two games of 2018 with another knee injury, then the final three games with a back injury. Wentz also suffered a concussion in a playoff game after the 2019 season. 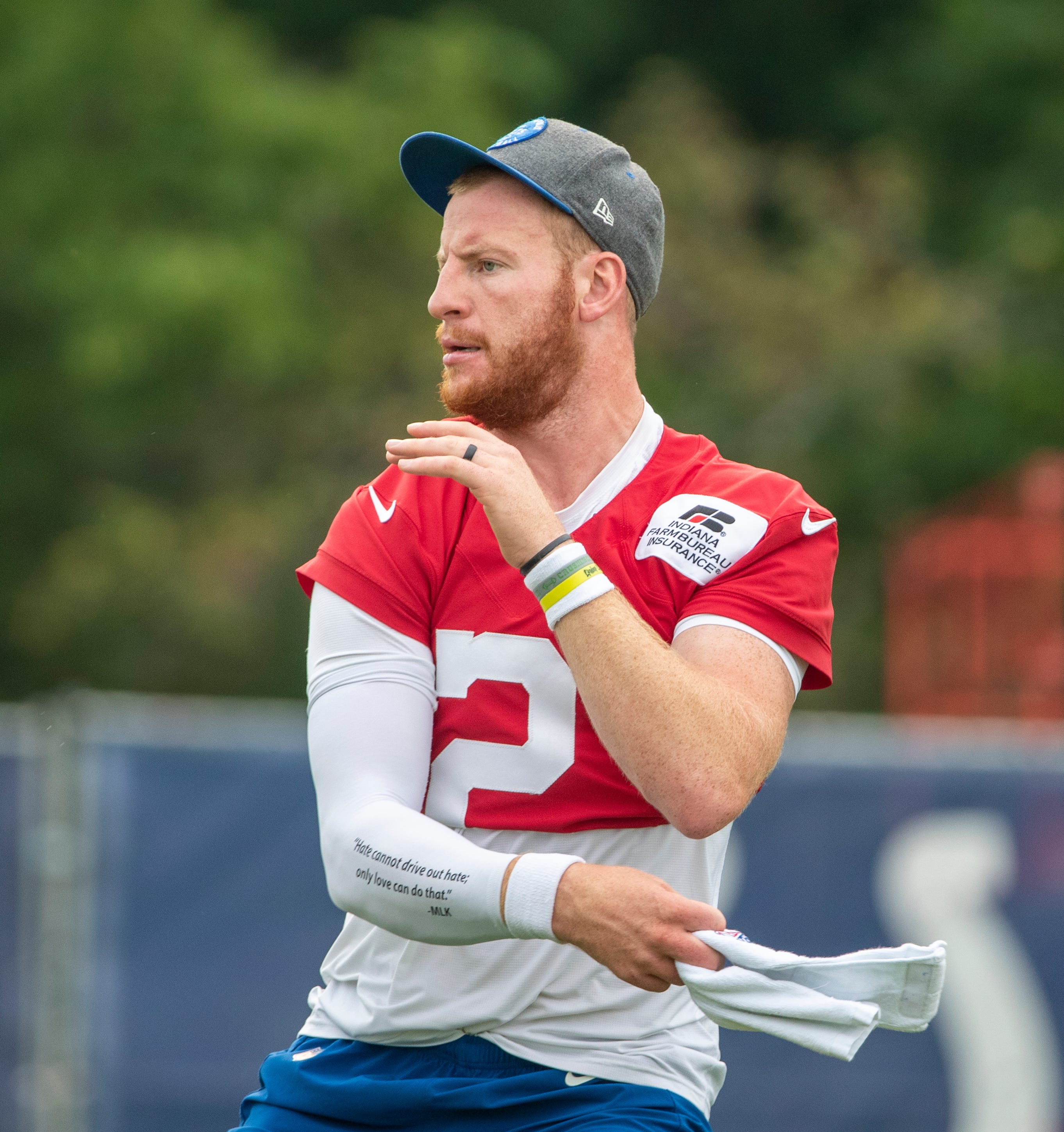 The trade compensation for Wentz is tied to his playing time. If he plays at least 75% of the Colts’ snaps, or 70% and the team makes the playoffs, the 2022 second-rounder becomes a first-round pick.

Aaron Boone opens up about his uncertain Yankees job security

© Provided by The Gazette A vaccinator administers a dose of vaccine to Karl Contout at the COVID-19 vaccination site on Park Ave. in Montreal Friday September 10, 2021. Updated ... Read more »

© Photo by Josh Hedges/Zuffa LLC/Zuffa LLC via Getty Images We’re just a couple of days away from the UFC 266 pay-per-view (PPV) card, scheduled for this Sat. night (Sept. ... Read more »

Live Eredivisie: PSV leads at half-time against Eagles in an exciting duel

Follow all the duels via our live scoreboard, with the lineups, the goalscorers and extra statistics. PSV starts the away match against Go Ahead Eagles with Phillipp Mwene. The right ... Read more »

The Detroit Red Wings expect to be shorthanded when they travel to Montreal to battle the Canadiens on Oct. 23. GM Steve Yzerman told reporters including Helene St. James of ... Read more »

CINCINNATI (AP) — The finale of Pittsburgh’s three-game series at Cincinnati was postponed Wednesday by rain about 10 minutes before the scheduled first pitch. The game was rescheduled for Monday ... Read more »

Jonquel Jones is no stranger to winning Associated Press WNBA awards. In previous years, the Connecticut Sun forward has been honored by the media that votes on the weekly AP ... Read more »

Is This Season Johnny Gaudreau's Last With the Calgary Flames?

Johnny Gaudreau’s days with the Calgary Flames could be numbered, but where could he land? © Provided by Hockey News on Sports Illustrated John E. Sokolowski-USA TODAY Sports Johnny Gaudreau’s ... Read more »

Leafs star William Nylander not fully vaccinated, but will be by start of season

It was a definite step toward normalcy as the Toronto Maple Leafs conducted their media day without the common virtual trappings we’ve come to expect in sport over the past ... Read more »

Indianapolis Colts coach Frank Reich said quarterback Carson Wentz will not practice Wednesday and did not participate in the team’s walkthrough. An MRI confirmed sprains in both ankles. Right tackle ... Read more »

IPL 2021: Kyle Jamieson 'flirts' with RCB massage therapist, all you need to know about Navnita Gautam

Delhi Capitals pacer Anrich Nortje restarted his Indian Premier League (IPL) 2021 campaign from where he had left in May as he produced a fast and furious performance in Match ... Read more »

© Provided by For The Win Sevilla welcomes Valencia to the Ramon Sanchez Pizjuan Stadium in La Liga action on Wednesday afternoon. Sevilla has eight points from their first four ... Read more »

Live Eredivisie: Gakpo puts PSV in the lead at Eagles

Follow all the duels via our live scoreboard, with the lineups, the goalscorers and extra statistics. PSV starts the away match against Go Ahead Eagles with Phillipp Mwene. The right ... Read more »

Team USA has the better, younger players at the Ryder Cup this week, but Team Europe has the teamwork and experience to pull off the upset yet again © Provided ... Read more »

By Steve Keating © Reuters/JONATHAN ERNST The 2020 Ryder Cup KOHLER, Wisconsin (Reuters) – If you want to get on the right side of Wisconsin locals you can do two ... Read more »

Panthers, off to 2-0 start, visit Texans in prime time

In an effort to get every team a Thursday game, NFL schedule makers often take some of the likely tail-enders and stick them in early season games. Sort of a ... Read more »

MILAN (AP) — For the second consecutive game, an AC Milan player was the target of racist chants. Milan goalkeeper Mike Maignan, who is Black, used his Instagram account to ... Read more »

LONDON (AP) — Standing sections are set to return to Premier League stadiums for the first time in 27 years. British authorities on Wednesday announced a pilot scheme that will ... Read more »

Justin Fields takes over as Bears' starting quarterback vs. Browns with Andy Dalton out

The Justin Fields era has begun in Chicago. Days after Chicago Bears coach Matt Nagy was adamant that Andy Dalton would remain the starter, he announced Wednesday that the rookie ... Read more »

Through two weeks of the NFL season, the league still doesn’t have a grasp on all the contenders and pretenders in the league. Are the Carolina Panthers going to challenge ... Read more »

Davis Mills to start for Texans at QB in 'Thursday Night Football' game vs. Panthers, Tyrod Taylor ruled out

It will be rookie Davis Mills under center for the Texans when they take on the Carolina Panthers to begin Week 3 in the NFL on Thursday night. Head coach ... Read more »

The U.S. Ryder Cup team has official blue jeans? Indeed, and here's a closer look at the brand.

Blue Delta Jeans has been named the official supplier of jeans for the U.S. Ryder Cup Team this year at Whistling Straits. All players, captains and PGA staff have been ... Read more »

© Darren Calabrese/Canadian Press The Saint John Sea Dogs hope the opportunity to host the 2022 Memorial Cup will mean a repeat of this scene, when the team hoisted the ... Read more »

Report: Negotiations Between Canucks and Hughes, Pettersson to Pick Up

The Vancouver Canucks are expected to increase negotiations with both Quinn Hughes and Elias Pettersson. © Provided by Hockey News on Sports Illustrated Jeff Curry-USA TODAY Sports The cloud that ... Read more »

The Saint Johns Sea Dogs have been named host of the 2022 Memorial Cup for the first time in franchise history © Provided by Hockey News on Sports Illustrated Aaron ... Read more »

There was already going to be drama in the air as the San Jose Sharks get their 2021 preseason underway given all of the offseason news surrounding Evander Kane and ... Read more »

© Provided by The Times of India BENGALURU: The Department of Youth Empowerment and Sports (DYES) on Wednesday constituted a five-member committee to develop sports infrastructure in the state. The ... Read more »

McGregor's Singing Is Worse Than His Pitching

Louis van Gaal at Telstar: ‘As if the king is visiting, it's unbelievable'

By Dennis van Bergen Lunch has yet to begin at Sportpark Schoonenberg, when Telstar director Steef Hammerstein runs into the improvised press room with an enormous roll of adhesive tape ... Read more »

What to expect from Justin Fields in his first NFL start

LPGA Tournament of Champions gets a new name, location with move to Lake Nona

Steelers' Ben Roethlisberger in pain when he throws, still set to start vs. Bengals amid pectoral injury

The Giants still have the same glaring problem