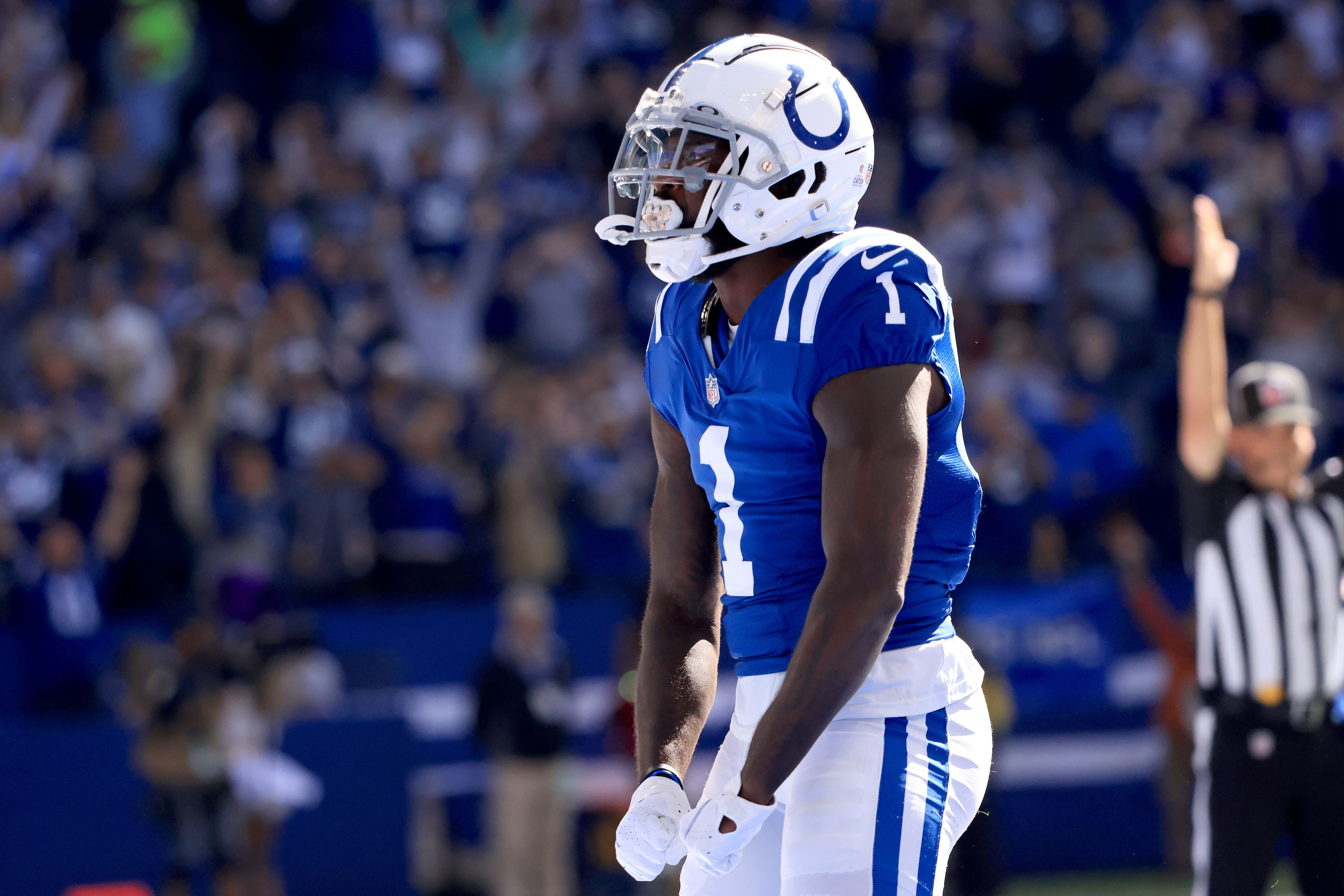 Indianapolis Colts wide receiver Parris Campbell underwent surgery this week to correct a foot injury he suffered in Week 6 and even though it could potentially knock him out for the rest of the season, there is still hope he returns.

Head coach Frank Reich told the media on Friday that Campbell is looking at a recovery timeline of 2-3 months to heal from the foot injury he suffered on the 51-yard touchdown play against the Houston Texans.

“He could be back. So, the surgery and everything went well and it’s two to three months they’re saying. So, if you do the math on eight weeks, there’s a few weeks to go in the regular season,” Reich said. “So, certainly not going to rule that out. I think Parris (Campbell) is of the mindset that he’s going to work hard and so we’ll just see how it plays out.”

The team placed Campbell on the injured reserve list on Tuesday.

Campbell’s career has been riddled with injuries throughout his rookie and sophomore seasons. This will be the fifth surgery he’s undergone that we know about during his young career.

The former second-round pick still has a year left on his contract so it’s unlikely the team parts ways with him, but he’ll be out to prove something when he returns either at the end of this season or in 2022.

Alert! EPF contributions will stop from next month if you do not do THIS updation

© Provided by DNA If you are an employee and entitled to the Employees Provident Fund or EPF which is a post-retirement payments scheme, then this is important news for ... Read more »

India vs New Zealand 1st Test: Why Wriddhiman Saha has been substituted by KS Bharat on Day 3?

© Provided by Zee News Indian wicket-keeper batter Wriddhiman Saha hasn’t taken the field due to stiffness in his neck on Day three of the ongoing first Test against New ... Read more »

India vs New Zealand: Wriddhiman Saha Walks Off The Field Due To Neck Stiffness; KS Bharat To Keep Wickets

Something going on at Delhi Capitals which is not out in public: Irfan Pathan on Shreyas Iyer's non-retention

Former India all-rounder Irfan Pathan feels Shreyas Iyer decided to make himself available for next year’s Indian Premier League mega-auction as he wants to look for a different challenge after ... Read more »

Fabulous Lives Of Bollywood Wives 2 promo out. Neelam, Maheep, Bhavana, Seema are back in action

Maheep Kapoor, Bhavana Pandey, Neelam Kothari and Seema Khan are back with the second season of their Netflix series, Fabulous Lives Of Bollywood Wives. The makers dropped its promo video ... Read more »

Indian film actor and model Rahul Khanna‘s post-workout selfie is creating quite the havoc online, and making us want to get on the fitness bandwagon. With the arrival of the ... Read more »

© Provided by Pinkvilla It has been an exciting few days for Ananya Panday and Vijay Deverakonda fans as the two have been sharing updates from Liger shoot in the ... Read more »

IPL 2022 mega auction: MS Dhoni does not want to be CSK's first retention and the reason will surprise you

© Provided by DNA With the day to finalise the retention of four players per franchise for the Indian Premier League (IPL) 2022 edition is getting closer, the skipper of ... Read more »

© Provided by Pinkvilla ‘Bhagya Lakshmi’ actress Aishwarya Khare opens up on getting into the look of ‘Heer’ from the 1992 movie ‘Heer Ranjha’, starring Anil Kapoor and Sridevi, for ... Read more »

Toto Wolff is reported to have shot down a suggestion that Mercedes should call up George Russell for the last two races of the season. © PA Images George Russell ... Read more »

In the Grizzlies home contest against the Atlanta Hawks, the team’s starting point guard left the game with an apparent leg injury.  Towards the end of the first quarter, Morant was ... Read more »

A quarter of the way into the 21-22 NBA season and the Charlotte Hornets are staring down the reality of a top-four finish in the Eastern Conference by season’s end.  ... Read more »

Raid of investigative services at Juventus

Chairman Andrea Agnelli, vice-chairman Pavel Nedved and former technical director Fabio Paratici, now employed by Tottenham Hotspur, are the suspects in the case. The listed Juventus is said to have ... Read more »

Photo caption: An artist’s concept shows a supermassive black hole surrounded by a disk of gas. (Photo: Nasa) In a rare astronomical event, scientists have observed light from the merger ... Read more »

© Provided by Zee News Jaipur: Diamond jewellery worth Rs 2 crore on Friday was stolen from a hotel room when the family was away for a wedding at night ... Read more »

DHSE Kerala Plus One Result 2021 declared, here's how to check

Directorate of Higher Secondary Education has declared DHSE Kerala Plus One Result 2021 on November 27, 2021. Candidates who have appeared for the examination can check the result through the official ... Read more »

© Provided by The Print Patna: Who did more for Bihar — Nitish Kumar or Lalu Prasad Yadav? The debate played out in the state this week as Nitish completed ... Read more »

Trauner finds Feyenoord incomparable with playing in Austria: ‘I was recognized before I signed'

By Mikos Gouka The biggest difference between Austria and the Netherlands? Gernot Trauner laughs. The 29-year-old defender recently got on a bicycle with his young family in his hometown, a ... Read more »

A collision has been reported between two foreign cargo ships 10 miles from Okha in the Dwarka district of Gujarat. A team of Coast Guards along with a patrol ship ... Read more »

© Provided by The Statesman At the battlefront The example that he has set is perhaps singularly astonishing, and quite unprecedented. The Prime Minister of Ethiopia, Abiy Ahmed, has promised ... Read more »

© Provided by The Statesman Self-goal? Those of a particular vintage will remember former British Prime Minister Tony Blair’s strong push in the late 1990s for what was described as ... Read more »

© Provided by Zee News New Delhi: Prime Minister Narendra Modi is chairing an important meeting on the Covid situation and the vaccination drive in the country with top officials, ... Read more »

© Provided by WION In what can be called a welcome surprise, visitors to Lake Manitoba in Canada witnessed a rare phenomenon, which is only seen every few years around ... Read more »

Kanpur Test: R Ashwin argues with umpire Nitin Menon after running across him during followthrough on Day 3

Ajinkya Rahane, R Ashwin R Ashwin was the centre of attention on Day 3 of the 1st Test between India and New New Zealand in Kanpur as he was involved ... Read more »

© Provided by MensXP With the deadline to announce the list of IPL retentions fast approaching, most of the eight existing franchises have, more or less, made their mind about which ... Read more »

Perhaps, he says, there is a connection between the stove accident on January 10, 2019, in which he suffered third-degree burns to his legs, and his return after a total ... Read more »

Australian Summer of Tennis 2022: When is it, vaccine situation, how to watch, who is playing, tournament hosts

There is plenty of tennis on offer for Australian fans before the Australian Open 2022. Tennis Australia has now confirmed the schedule of tournaments held across the country before the ... Read more »

Great expectations, no guarantees as US expose Matildas frailties

IND vs NZ: Why did Ashwin and umpire Nitin Menon argue over his round-the-stumps run-up?

MS Dhoni not keen to be CSK's first-choice retention, wants higher salary for other players - Report

Darter Van Barneveld: nothing to lose against Van Gerwen

Vicky Kaushal smiles as he reveals his ‘favourite place on earth' & NO its not what you think; PIC

EXCLUSIVE: Aamir Khan & Ranbir Kapoor to do a film together; Shoot likely to begin in second half of next year